Finland’s inventory of the intangible: music, circus, cuisine and everything in between

Finland’s original approach to cataloguing intangible cultural heritage is collaborative and ongoing. The inventory includes many of the country’s singular strengths and inimitable quirks, some of which might become part of Unesco’s lists of Intangible Cultural Heritage.

“Urbotek,” one of the newest performances by Finnish circus Race Horse Company, is situated in an “alternative shadow world of modern culture, urbanisation and entertainment” and includes “beautiful sexy circus people” and “dangerous sharp acrobatic skills,” say the creators.

Finland recently compiled a National Inventory of Living Heritage. While sauna, Santa Claus and Finnish tango seem obvious to everyone who has had any contact with Finland, other entries on the list are probably less familiar.

Finnish circus culture and the Kaustinen folk fiddling style are among the heritage elements included (Kaustinen is a town about 450 kilometres (280 miles) north of Helsinki). The Finnish Ministry of Education and Culture selects from the inventory when making nominations for inclusion in Unesco’s Intangible Cultural Heritage listings.

The inventory was compiled in an unusual way that garnered a lot of positive feedback. It kicked off when the Finnish Heritage Agency invited some of the key players from various fields to create informal panels of experts.

“It was fantastic to see the inclusive approach that was adopted for this process,” says Johanna Mäkelä, communications officer at CircusInfo Finland. The Finnish Heritage Agency opened a wiki platform where anyone could make a suggestion for inclusion in the list. The wiki has received more than 130 submissions in five different languages; 52 of them progressed to the National Inventory.

“Like intangible culture itself, which lives in interaction between people, the platform allowed involvement on all levels,” says Mäkelä. “This led to the decision-making happening horizontally, as opposed to the more common top-down scenario.”

All-inclusive in all sorts of ways 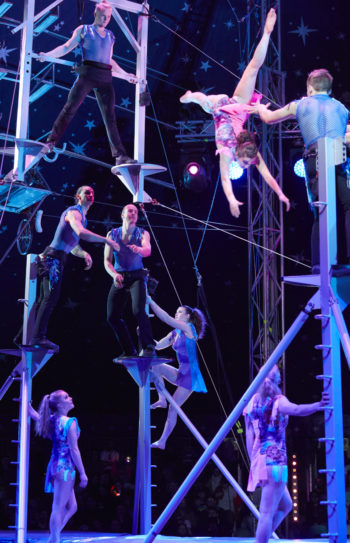 A strong sense of communality also runs deep in Finnish circus culture. All practitioners, from amateurs to professionals, learn the necessity of trusting and supporting each other; it’s an integral part of circus activities.

“Finland has a strong youth circus culture where social inclusion plays a key role,” says Mäkelä. “Lessons are available for all age groups, and have also been used as a means of social integration with specific groups of people, such as immigrants.”

The whole process of seeking and gaining a place in the inventory has strengthened cooperation between circus groups nationally. “CircusInfo Finland, Sirkus Finlandia and Arts Promotion Centre Finland [known by its Finnish abbreviation, Taike] invited all representatives of the field to join in the talks,” says Mäkelä. “The process has brought the different circus practitioners closer together, which is wonderful, and beneficial to all.”

Similar elements are visible in the culture of the Kaustinen folk fiddling style, in which playing music is a communal event that unites the whole village.

A collective effort is necessary to get a heritage element onto the list, whether it is circus culture, a musical style or any of the other entries that currently make up the inventory, including everything from lace making to glassblowing, and from the Finnish connection with the forest to the unflatteringly expressed “stinginess of the people in Laihia.”

Many of the inventory’s elements receive coverage elsewhere on this website: sauna bathing; the declaration of Christmas Peace; the national poet Runeberg; the tradition of visiting cemeteries on Christmas Eve; the resurgent lawn game known as mölkky; Everyman’s Right, which lets everyone share the land; the Finnishness of Santa Claus; Finnish tango; and wild food foraging, to name a few. The process continues: Although the previous round closed in 2017, the opportunity is reopening at a later date, in 2019 at the earliest.

From weddings to festivals 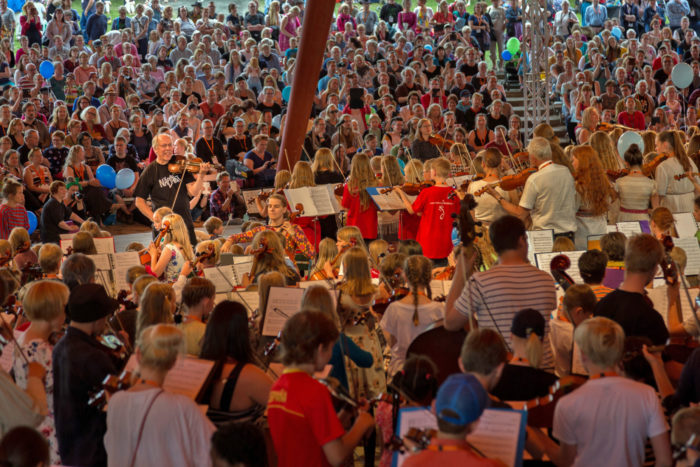 “The tradition stems from the centuries-old pelimanni [folk-musician] culture, so it provides a unique window on the musical culture of 18th-century Finland,” says Matti Hakamäki, director of the Finnish Folk Music Institute, headquartered in Kaustinen.

The local folk fiddling style has successfully managed to balance between history and modernity, and has survived thanks to a number of dedicated individuals. Kaustinen Folk Music Festival, an annual summer event celebrating the local music culture and other folk music and dance, has been running since 1968. According to Hakamäki, it was a great success right from the start, and hosts approximately 5,000 performers from all over the world every year.

“Before the festival, a strong regional tradition existed of pelimanni musicians entertaining guests at weddings that would last for days,” Hakamäki says. “Due to changes in societal structure, the tradition started to wane during the ’60s. In order to preserve the culture, they came up with the idea of building a festival around it. Today, the Kaustinen folk fiddling style is as alive as ever.”

He says that the area’s music is not reserved solely for celebrations. “It is also a fundamental part of local people’s everyday life. They say that there’s a violin in every household in Kaustinen.” 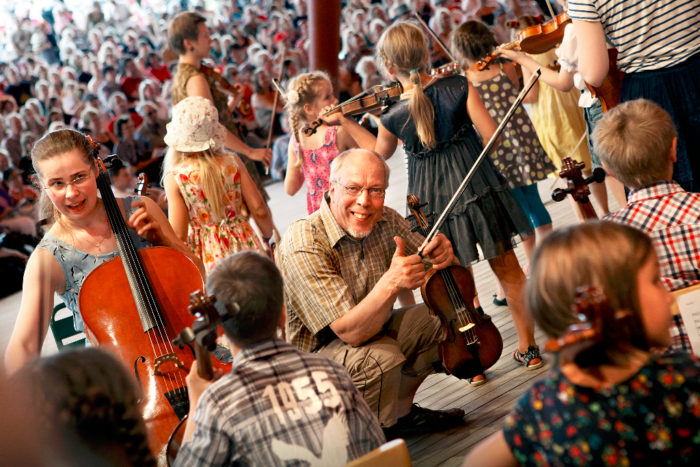 Mauno Järvelä gives the thumbs-up sign before the Näppärit kids perform at the festival in Kaustinen, showing that a centuries-old musical culture continues in a modern context.Photo: Kaustinen Folk Music Festival

The National Inventory of Living Heritage also includes kalakukko, a traditional fish pasty of the Savo region; the oral tradition of Finnish Roma singing; and the distinctive woollen sweater design that originates in the west coast town of Korsnäs. Many examples of cultural heritage are associated with a particular locality.

“Since Kaustinen was such a remote place in the past, its musical culture has been developing at its own pace, brewing slowly with few influences from outside,” says Mauno Järvelä, an esteemed fiddler and teacher who started Näppärit, a Finnish musical education philosophy based on traditional music. Every year hundreds of children participate in Näppärit workshops and in a concert at the Kaustinen Folk Music Festival, helping ensure the future of the music.

“What makes the Kaustinen folk fiddling style unique is the rhythm, where the latter part of the beat is emphasised,” says Järvelä. “There’s no clear pattern, but the music just swings. As one fiddler described it, ‘Like the whirl of the rapids, it just carries you.’”

The same goes for many of the elements in the National Inventory of Living Heritage.

His Royal Highness The Duke of Cambridge, also known as Prince William, got an unusual gift during his official visit to Finland: two handcrafted hobbyhorses. They’re more than mere toys.