Mauno Järvelä's violin pedagogy is nicknamed "sisuki," a pun alluding to the famous Suzuki method and to the Finnish word "sisu," denoting a combination of courage and endurance.

[Editor’s update: The esteemed Sibelius Academy in Helsinki awarded Mauno Järvelä a rare honorary doctorate in June 2012 in recognition of his contribution to music education.]

Kaustinen, a village 450 kilometres north of Helsinki, has hosted the world-renowned Kaustinen Folk Music Festival each July for more than 40 years. If you hang around the festival any year, you’ll see Mauno Järvelä walking by the main arena, carrying a violin case. Along the way he stops to chat with acquaintances and friends.

Mauno Järvelä, cofounder of the internationally acclaimed folk group JPP, seems to be in his element in the midst of the festival atmosphere.

“When the first real folk festival was held in 1968 I was still a youngster, but I started playing as soon as my arms reached the length of a violin,” says Järvelä. “In the 1950s, there were no small violins available in Kaustinen, so you didn’t get to play as a kid. When there were weddings in the summertime, I always sat on the edge of the stage carefully listening as the master musicians played.”

In a way, Järvelä’s memories reveal the basis of his life’s work. One of his greatest accomplishments of his life has been inspiring large groups of children to play music and sing together as part of the Näppärit (“pluckers”) groups.

There have been folk musicians in Kaustinen for more than 200 years. Over the past decade, the area has sent an exceptional number of professional musicians out into the world, at first wind instrument players and church cantors, and more recently string players.

“The Folk Music Festival was preceded by many other festivals that featured Kaustinen folk musicians and professionals who got their start here,” says Järvelä. “At these events, the folk players got a new place to show off their skills. Alongside the old musicians, a generation of new players began to appear. They began to be called näppärit or ‘string pluckers’. So the Näppärit were never formally established.”

To Helsinki and back again 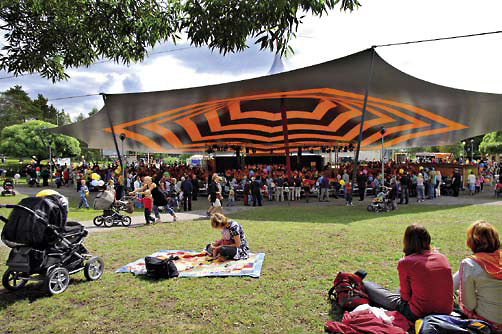 But before Järvelä’s big idea came to fruition, he toured the Helsinki region with his fiddle. “I was the youngest of eight children, and the only one to graduate from high school. I took the shorter course of mathematics and then got into the Sibelius Academy in Helsinki.”

Inspired by his alma mater, Järvelä began playing in orchestras, first at the Finnish National Opera Orchestra and then the Finnish Radio Symphony Orchestra. In 1978, he returned to his roots in Kaustinen. First he was offered work with an orchestra in Kokkola, with teaching making up half of his work.

Soon Järvelä also started to teach at Perhonjokilaakso Folk College. That became his full-time job in 1985. “For a long time, I had been thinking children could be taught music in a new way,” he says.

“Musical education would no longer be simply professional training with tests and studies, but would instead be a hobby that offered joy and experiences to as many as possible.”

Järvelä’s idea was that instrument lessons would use the time-tested methods of classical music, but that the cornerstone of playing together would be folk music.

“First we play and sing ‘plucking music,’ easy tunes that give the kids the basis for folk songs that are more difficult in terms of style and technique. Näppäri music is arranged in such a way that there is an appropriate role for everyone depending on their skills.”

Within the past two decades, the Näppäri idea has spread to the other Nordic countries as well as Germany and Switzerland. Näppäri courses have been held as far afield as the USA and even South Africa.

“The Näppärit get their biggest audience – up to 3,000 people – during the children’s matinee at the annual Kaustinen Folk Music Festival, which forms an ideal showcase for the programme. Every time there are parents with children who come up to ask how they can join the Näppärit.”

Järvelä remembers when he was 11 or 12 years old and got to join a musical tour around the village with older masters of folk music, arranged by the legendary local café owner Santeri Isokangas (1885–1967).

“There was an unbelievably wonderful atmosphere,” Järvelä says. “Now – as an old folk player myself – I’m happy to play music with children. They don’t have any unnecessary prejudices, and you can see from their faces how much they enjoy playing.

“It’s really something when you can just go under a birch tree and play folk music on the world’s most distinguished instrument to your heart’s content – or play in a packed festival arena with 200 of your friends.”

In addition to the Perhonjokilaakso Folk College, Järvelä teaches at the Kaustinen Music High School. And plays. And can mostly decide what he wants to do.

“I started playing myself with the Järvelä village tunes and the Järvelä village style. I got my first lesson from Juha Kangas (founder of the Ostrobothnian Chamber Orchestra).” The fiddle group at the Kokkola Workers’ Academy and some national music camps were important steps along the way.

“At the Sibelius Academy in Helsinki, I got to study with the renowned violin professor Onni Suhonen. It hasn’t always been easy, but the strength of the music has carried me forward, and it seems like it still does.”