Visiting the cemetery forms part of many Finns’ Christmas rituals. Hey, it’s not as morbid as it might sound.

At Christmastime many Finns visit cemeteries to place candles by the graves of relatives, or by monuments such as this one in memory of war veterans.

Although going to a graveyard might seem an unlikely activity for the festive season, the sight of hundreds of graveside candles glowing in the snow in a serene wooded cemetery can be surprisingly uplifting.

Placing candles on the graves of deceased relatives at Christmastime is a deep-rooted tradition followed by non-churchgoers and members of the Orthodox faith, as well as believers from the majority Evangelical Lutheran Church of Finland. “As many as three-quarters of Finnish families visit a cemetery at Christmas, mostly on Christmas Eve, and we even have to make special traffic arrangements to accommodate the crowds,” says Risto Lehto, who manages six cemeteries run by the Parish Union of Helsinki.

Lehto explains that many people stroll in their local graveyards at Christmas even if none of their relatives are buried there, just to enjoy the tranquil candlelit scene. “Our cemeteries also have memorial features where people can light candles for those buried elsewhere.”

Light in the darkness 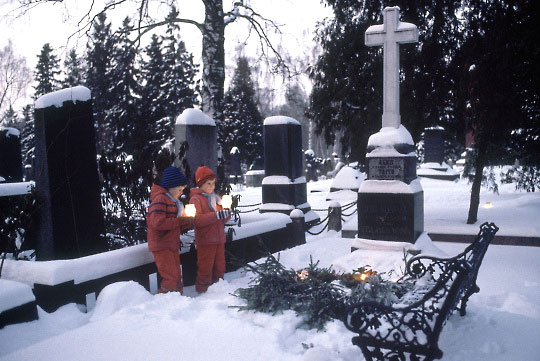 People come to the cemetery to pay their respects or just to reflect quietly on the candlelit scene.Photo: Heikki Saukkomaa/Lehtikuva

Though the cemetery may be crowded, the atmosphere is silent and solemn as people quietly reflect on the candlelit scene, and their lost loved ones. “In truth cemeteries are for the living and not for the dead,” says Lehto. “In Finland we really take care of our cemeteries as scenic parks with grand old trees. They’re places where people can enjoy a peaceful stroll, as well as remembering the deceased. Grieving can be a long process, and we like to provide settings where people can gain comfort. Our cemeteries are nothing like the scary derelict graveyards you see in horror films!”

The myriad graveside candles certainly bring light and joy to the scene on a midwinter afternoon, making a secluded cemetery look like a mystic fairy dell. Some people make picturesque natural lanterns around their candles using piles of snowballs or icy covers made of water that has been frozen in a bucket.

Lehto explains that the tradition of putting candles by graves only became widespread in Finland in the 1920s, when candles became affordable. However, the custom of paying seasonal respect to the dead probably dates back much further, and may even have its roots in pre-Christian times – like the pagan tradition of lighting midsummer bonfires, which is nowadays associated with the Christian feast of St John’s Day (Juhannus in Finnish).

A hectic time of peace 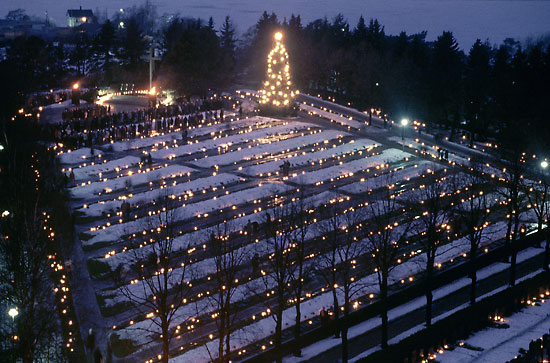 The sight of hundreds of graveside candles glowing in the snow in a serene wooded cemetery can be surprisingly uplifting.Photo: Heikki Saukkomaa/Lehtikuva

“In the post-war 1950s, when people wanted to remember those who died fighting to preserve Finland’s independence, putting candles on graves became more common on Independence Day (December 6) as well,” says Lehto. All Saints’ Day (November 1) is another day when Finnish cemeteries radiate with soft candlelight.

“The tradition of visiting the cemetery certainly fits in well with our idea that Christmas is a family festivity, and a time of peace,” says Lehto. “Though actually for most Finnish families Christmas Eve ends up being a very hectic day, with a trip to the cemetery on top of other compulsory rituals like the huge Christmas meal, the Christmas sauna and the eagerly awaited arrival of Santa Claus!”