These students in Turku, southwestern Finland, are showing how excited they are about the arrival of a polar bear played by an Arts Academy dance education student.

“If we don’t take care of the environment and involve children in looking after it, there won’t be a future for them to inherit,” says David Yoken.

He’s a senior lecturer at the Arts Academy at the Turku University of Applied Sciences in southwestern Finland. The university leads the Green Actions project, which Yoken initiated, with the goal of using arts education to inspire children to be aware of climate change and the challenges it poses.

As a composer and musician with experience of bringing together interdisciplinary and artistic elements at the academy, Yoken’s aim is to draw on the talents of his own students to benefit younger school pupils, in Finland and further afield. In keeping with Finland’s role as chair of the Arctic Council until 2019, Green Actions embraces educators and students across the whole Nordic and Arctic region, including the Finnish Lapland community of Ivalo; northern Norway; Sweden; Denmark; Iceland; Greenland and Alaska.

The action’s in the art 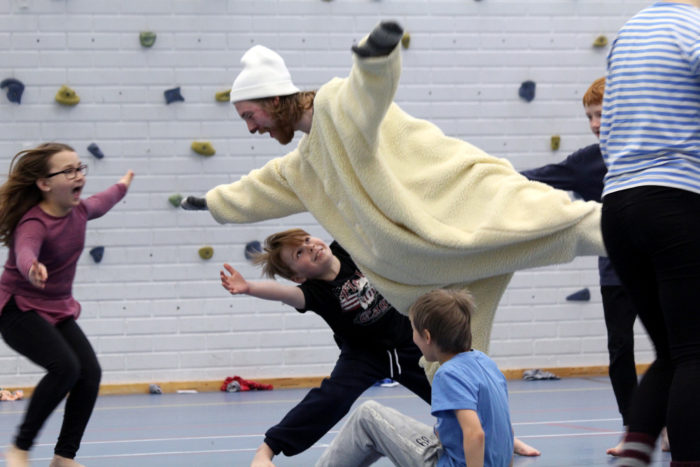 Getting into art: In this educational game, the kids are trying to save a polar bear played by Evgeny Kostyukov from the Arts Academy.Photo: Antti Hartikainen/Turku University of Applied Sciences

“One of the things I did early on in my 25 years at the Academy was to find outside funding support for projects,” says Yoken, who is also on the board of the Fulbright Finland Foundation. “I started working through Nordplus, the Nordic Council of Ministers’ learning programme. In 2007 or 2008 it dawned on me that I get to work with these young, remarkable and talented Finnish musicians and dancers every day, and this inspired me to secure a budget for Moving In Moving On [MIMO], a project for at-risk youth.”

The results of MIMO, which was funded by the EU’s Central Baltic Programme and concluded in 2013, confirmed that art-based methods in combination with professional working methods in healthcare and youth work could increase youth wellbeing. Yoken’s ongoing concern is that participants in projects like MIMO should be able to keep using the tools they acquire in the programme after the project is complete – and that the target group should also continue to benefit.

One of Green Actions’ earliest manifestations took the form of three-day workshops in April 2017 for pupils in second grade at the Pääskyvuori Primary School in Turku, designated as a laboratory for creative pedagogical development. The ad hoc workshops, tutored by Arts Academy students of dance education and visual arts, included games – a polar bear balancing on shrinking ice, for example – and activities such as comic book creation and a garbage orchestra with instruments made from discarded objects.

“It was a really mind-opening experience to see the pupils at Pääskyvuori Primary School wake up to the situation of climate change through the arts,” says dance education student Emma Keitilä. “Those art-related workshops actually gave the pupils new ideas to stop global warming and save the polar bears.” 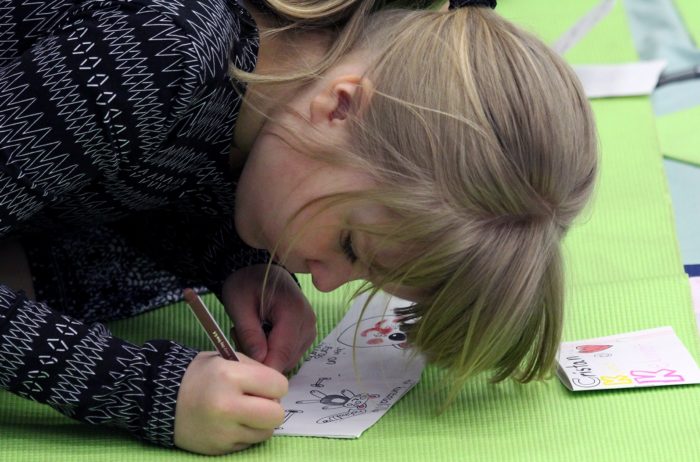 A student at Pääskyvuori Primary School is absorbed in creating an idea book, one of her class’s Green Actions activities.Photo: Antti Hartikainen/Turku University of Applied Sciences

Another instance of Green Actions in action is the involvement of Ivalo High School in Finnish Lapland, where English and Swedish teacher Ulla Keskitalo, music teacher Katri Kittilä and arts teacher Rodney Francett have planned and carried out Green Actions activities together with their students.

The idea of older students mentoring younger ones is important to Green Actions, and in this case 16-year-old high school arts and music students worked with 53 elementary school pupils who are about four years younger.

“The pupils were divided into two groups: one for music and one for arts,” says Keskitalo. “In music, they were given some nature-related words in English to make their own lyrics and their own music with the help of the older students. Different instruments were used. The comments I heard were really positive – the group worked well and the participants enjoyed themselves.

“In arts, one big group was divided into smaller groups, which then worked with natural materials such as small willow branches, grass and pinecones to make pieces of art.”

Green Actions seeks to include and utilise local knowledge wherever the projects happen. “Local and traditional knowledge and journalism are a core focus in Green Actions,” says Yoken.

“I am inviting a colleague, Inga Hansen, a Greenlandic journalist, to present at our Green Actions workshop and seminar days at the Arts Academy at the end of February 2018. Inga is doing graduate research studies in Kautokeino, Norway at the Sámi University of Applied Sciences graduate programme in Indigenous Journalism. [The university] is a Green Actions partner.”

In Finland, the world’s largest parent-teacher meeting and other education ideas
Life & societyEducation

In Finland, the world’s largest parent-teacher meeting and other education ideas

The HundrED project discovers inspiring educational innovations in Finland and all around the globe, and shares them.

American teacher gets lost and found in Finland
Life & societyEducation