Helsinki’s Unesco-listed sea fortress Suomenlinna, the Finnish capital’s most beautiful and historic attraction, has never been so popular, attracting upwards of a million visitors, Finnish and foreign, annually. But visitors don’t always realise that the islands are home to a community of some 800 souls.

Many members of this community, including a diverse collection of artists, musicians, historians and museum curators as well as sailors from the Finnish Naval Academy based here, are drawn by the romance of island life. When the last ferry leaves for the mainland after midnight and the last tourist has deserted for the day, that life goes on behind the windswept windows of the stone apartments and wooden villas. 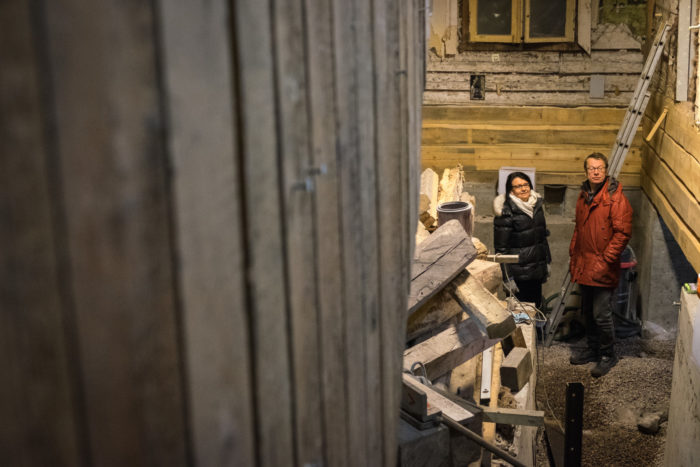 “We are newcomers – we’ve only lived here for about 30 years!”Photo: Tim Bird

Suomenlinna is home to some of Finland’s oldest buildings. A handful of properties remain in private ownership on land rented from the Suomenlinna Governing Body.  Seija Linnanmäki and her husband Markku Kallio own two of these, residing in one while renovations proceed on the other.

“We came to live on the islands in 1989 and only got access to running water and an indoor toilet in 1993,” says Seija.

Expeditions to the mainland are made in pursuit of the couple’s hobby: competitive ballroom dancing. This explains the several dozen trophies lining the top of the bookshelf.

“We are still very close to Helsinki,” says Markku. “But it’s pretty much like living in the countryside. There are people here who have been living here for many generations. We are newcomers – we’ve only lived here for about 30 years!” 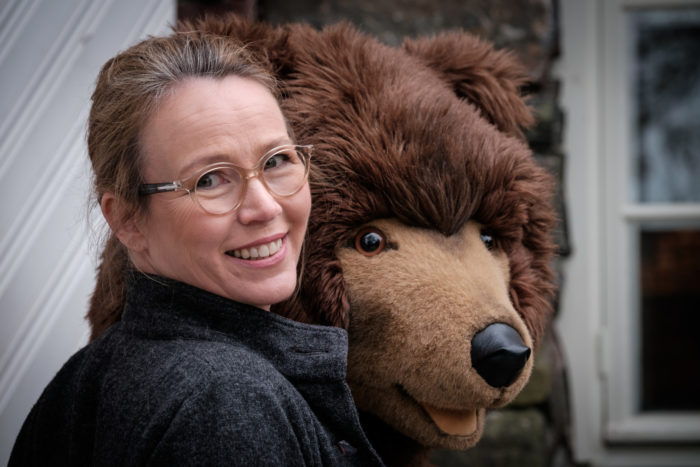 Petra Tandefelt, owner, collector and manager of the Suomenlinna Toy Museum, is pouring tea in the café adjoining the museum. On the shelf above the counter stands a row of similar samovars, a separate small museum in itself.

“Running the museum is not just a duty,” she says. “It’s a passion. I like to share the atmosphere and give people some kind of nostalgic feeling. There are more and more visitors, from all over the world. People need comfort and to be told stories, and to go back to their childhood a bit. That idea is important for me.

“In July when it’s most crowded and busiest, we get plenty of Finnish and foreign visitors. I think it’s important to concentrate on toys with a strong Finnish connection so I can explain some things about Finnish lifestyle to the foreigners.” 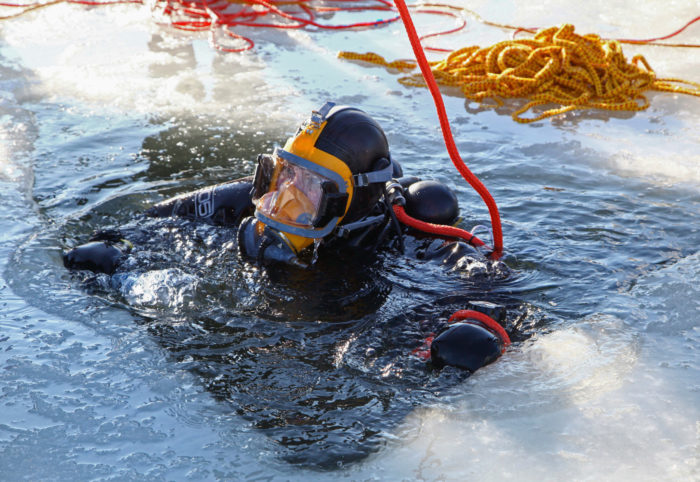 “If you live in a Unesco site, you have to be ready to share it.”Photo: Tim Bird

The temperature hovers at about minus 10 Celsius and the air is blue, still, sharp and bitterly chilled. A head emerges from a hole in the ice. Maritime archaeologist Minna Koivikko of the Finnish National Board of Antiquities is completing the inspection of a wreck. Minna’s PhD dealing with Suomenlinna is the first one in Finland in maritime archaeology, so her expertise is second to none.

“We dive under the ice because in the summer there is so much boat traffic,” she says. “Helsinki is at the mouth of a river (the River Vantaa) so there is a lot of silt that gets stirred up, spoiling visibility. It’s easier to locate a wreck using GPS coordinates, then to make the hole in the ice. In fact, making the hole is the most difficult part.

“I love living here. The community spirit has grown since I moved here. People look out for each other; we do a lot of things together. There are more visitors, but if you live in a Unesco World Heritage site, you have to be ready to share it.” 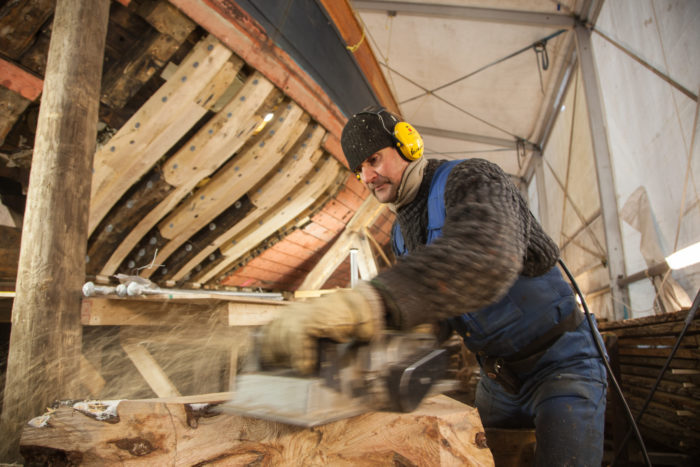 A white glow issues from a heated tent close to Suomenlinna’s dry dock. Inside, Mikael Holmström is at work repairing a wooden Norwegian trawler.  The only remaining traditional wooden shipwright in Finland, Mikael works a 60-hour week at the dock in winter and in summer.

“I like to be here at any time, but I am a winter person especially,” he says. “The only problem is it slows down my work because I have to do the snow clearing – nobody pays you for that.

“It’s close to the city but I could be anywhere. It could just as easily be the remote town of Inari in Lapland, but here I can have my own life and work. It’s not such a long time ago that everyone did their own work for themselves in Finland. But there is no subsidy for this work. That’s one reason why I do this 60 hours a week.” 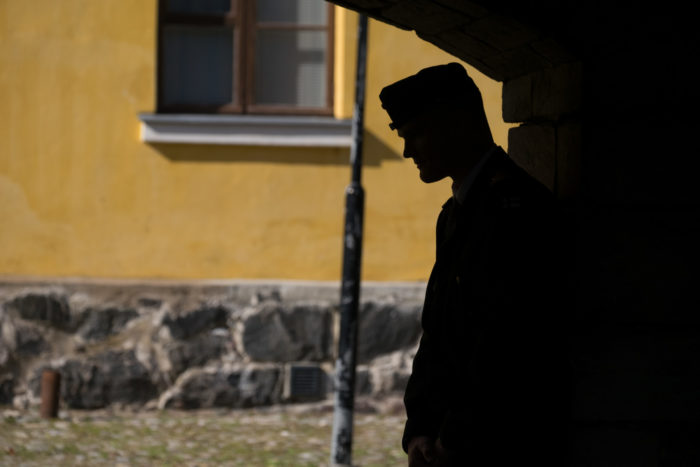 “The whole archipelago here settles you,” says Jaakko Vilander. “It allows you to be in your own undisturbed peace.”Photo: Tim Bird

It is an obvious paradox that one of Helsinki’s most peaceful outposts gained much of its character by being prepared for war. The island of Pikku-Mustasaari remains the site of the Academy of the Finnish Navy. Young conscripts in navy uniforms and academy cadets are frequent passengers on the public ferry. Cadet Chief Petty Officer Jaakko Vilander is one of these.

“What’s the best thing about living here?” he says. “That’s easy to answer. It’s the views and the serenity. The whole archipelago here settles you; it allows you to be in your own undisturbed peace.

“This place represents a kind of fantasy of what Finland could be, a small place where people try to look after themselves. It’s like Buddhism or a kind of monasticism. People pull away from society and live in their own quiet compartments. I can live in peace. But we can’t separate ourselves from society because it’s our job to protect it.” 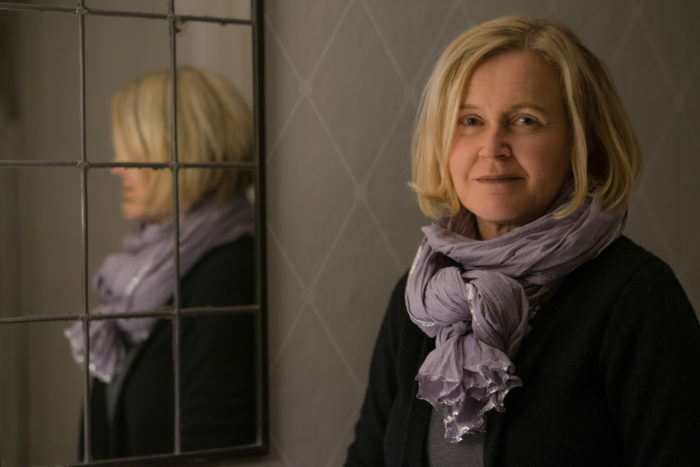 “I believe in someone’s soul or energy making its presence felt.”Photo: Tim Bird

Suomenlinna’s most westerly island, Länsi-Mustasaari, bears the brunt of the prevailing Baltic winds and the full force of the autumn storms. When the wind gets up here, it whistles through the trees and penetrates the windows of the apartment blocks built to house the officers and soldiers who once guarded the fortress.

One of those windows belongs to writer and painter Ida Lindström, whose top floor apartment offers glimpses of the lights of Helsinki. Ida is a guardian of Suomenlinna’s stories, of historical anecdotes, and of ghost tales.

“Do I believe in ghosts?” Ida nods her head softly. “I believe in someone’s soul or energy or whatever you want to call it making its presence felt. Not everyone sees or hears them. I think you’re lucky if you don’t! I don’t see anything, I only hear. Some people are more sensitive than others. Some people see weird things every week.” 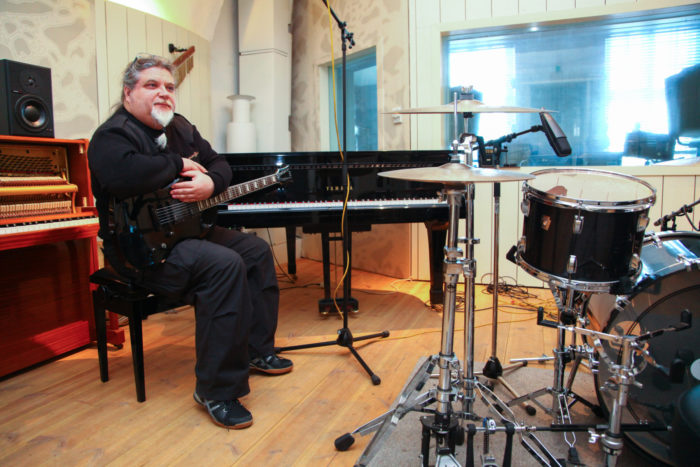 “The tempo here is a little slower than in the city. I like that.”Photo: Tim Bird

Hannu Leidén, musician, producer and sound engineer, is known to Finnish rock audiences as vocalist with Havana Black, big in the late 1980s and early ’90s and occasionally reunited.

Hannu’s gentle and friendly demeanour belies the full-blooded rock-and-roll growl admired by his fans. He strokes a long grey beard, a gnomic rock-rebel glint in his eye, as we talk in the apartment living room. The beam from the church dome that serves as a lighthouse sweeps above the window as we talk, signalling in Morse the letter H. H for Helsinki, H for Hannu.

“The tempo here is a little slower than in the city,” he says. I like that. “The presence of the sea is so great, I couldn’t think of moving away from it nowadays. Suomenlinna is a small village. It’s not always ideal and everything has its pros and cons, but if you feel a little sociable you can manage.”

Esa Toivanen: Music lover and inventor of the “stress cube” 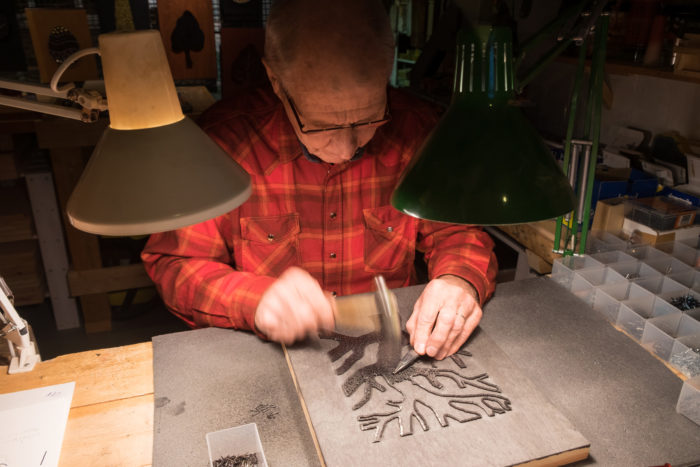 “I just keep the door open and people can come in easily.”Photo: Tim Bird

Esa Toivanen is waiting at the door of his studio, set back in a courtyard lined with former barracks and storehouses behind the Piper’s Park on Susisaari.

“I like making things from wood, so I started making pictures from nails,” he says. “I’m not sure where the idea first came from. There have been many people from around the world who say they haven’t seen anything like this anywhere else. I think there must be somewhere. But it’s not so common, this kind of creation.”

The island community is very artistic. “There are musicians, artists and crafts artisans, a guitar maker, textile artists. I had a previous studio on the second floor, but I have been in this one for three years. I just keep the door open while I’m here and people can come in easily.”

These texts and photos are part of Tim Bird’s “Suomenlinna – Islands of Light” book and exhibition project. The photo exhibition is on show at the Suomenlinna Museum and the book, in English and Finnish, is available in Finnish bookstores and online through the publisher, Docendo.