“May Day, or Vappu in Finnish, has always been a celebration of spring, as it is halfway between the March equinox and the summer solstice,” says Lepistö. The day has had associations with rites of witchcraft and fertility.

Later on, May 1 became International Workers’ Day, which, in Finland, evolved into a two-day carnival that surpasses New Year’s Eve in terms of merrymaking. “Unfortunately from a chef’s point of view,” Lepistö says, “not much is growing in Finland at that time of year, so we need to use a few spring veggies from more southern parts of the world.”

Lepistö has worked at several top restaurants in Helsinki, and served as head chef at Finland’s permanent mission in Geneva and then its embassy in Moscow.

“For me, the most celebrated and anticipated thing about Vappu is the brunch, traditionally a picnic with friends and family,” says Lepistö. “It’s served on May 1, which is actually the second day of the May Day celebrations. The main items on the menu are cured fish dishes like gravlax [cured salmon] or pickled herring, along with frankfurters and potato salad. For the sweet tooth, there is tippaleipä [funnel cakes], munkki [a kind of doughnut] and sima [a low-alcohol mead].”

For ThisisFINLAND, Lepistö has chosen recipes that can be prepared in advance and work well for a picnic or for spring celebrations at home. Follow local recommendations and regulations about social distancing. (Recipes and descriptions supplied by Timo Lepistö.)

Potato salad with asparagus and vanilla 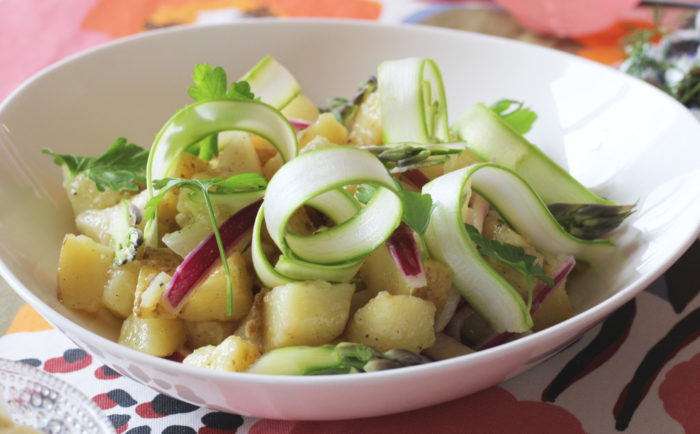 Thin slices of green asparagus top this potato salad, which is made with a light vinaigrette befitting the season and the May Day celebration.Photo: Piritta Kaartio

Potato salad is the cornerstone for May Day brunch settings. There are many types of potato salads, from mayonnaise-based to crème fraiche to vinaigrette. Potatoes can be quite heavy by themselves, so I’m using a vinaigrette sauce for variation and for its light feeling. For the potatoes, use the best you can find. I usually use a quite firm variety of organic potatoes. Cutting the potatoes into similarly sized pieces helps them to cook evenly. For best results and for convenience, prepare the salad almost completely the day before. You can vary the ingredients depending on your location and what’s in season.

Wash the potatoes or peel them and cut them into similarly sized pieces, cubes of about 2 cm (less than an inch). Peel the white asparagus and cut into 2-cm pieces. Bring a litre of water to boil and add a tablespoon of salt. Add the potatoes to the boiling water carefully. After five to seven minutes, add the white asparagus to the kettle and cook for four minutes. Once the potatoes are cooked, pour them into a sieve to remove the water, and leave them until the excess moisture disappears from the potatoes and asparagus.

Mixing the vinaigrette: Pour olive oil and vinegar into a mixing bowl big enough to mix the whole salad. Add a teaspoon of salt. Split the vanilla pod and scrape the seeds into the mixture. Put the pod into the vinaigrette, too, but remove it just before serving. Mix in the freshly ground black pepper and the capers.

Add hot potatoes and asparagus and mix well. It’s important to mix the potatoes into the sauce while they’re still warm. Peel and cut the red onion into small pieces and add it to the salad. At this point, cover the bowl with cling film and place it in the fridge. Use a vegetable peeler to shave strips off the green asparagus. Put the peels in a container, add cold water to cover them, and store it in the fridge.

On serving day: Let the potato salad stand at room temperature half an hour before serving. Drain the green asparagus strips and cut parsley leaves from their stems. Add to the salad. Always check the seasoning before serving. 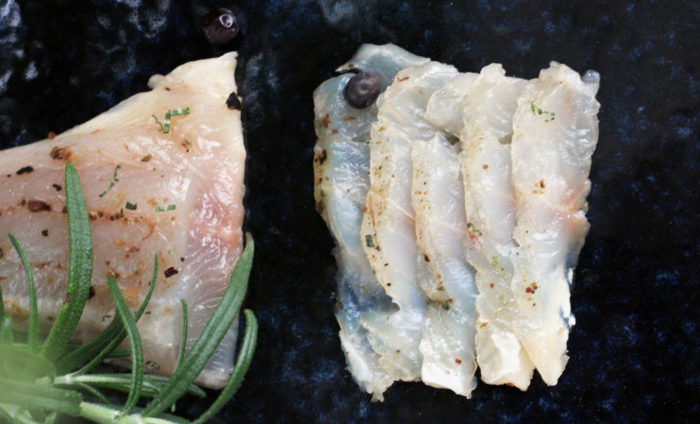 This cured whitefish is topped with smoked sea salt and juniper berries for a foresty taste.Photo: Piritta Kaartio

There are many side dishes that are served with the potato salad, for example steamed frankfurters, marinated shrimp and fish dishes such as smoked fish, gravlax or cured herring. For this recipe, I am using whitefish, but you can also use salmon or any other fish that is suitable for curing. The important thing is to use very fresh fish and adjust the salt, sugar and spices according to the fish weight. I wanted to have a bit of a smoky, foresty feel to this dish, so I am using smoked sea salt and juniper berries to achieve the desired taste profile.

Check that all the pin bones have been removed. If the fish is in one piece, cut it into two. Put all the ingredients except the fish into a mortar and make a paste. Spread the mixture evenly over the fillets, then place the fillets on top of each other, with the meat sides facing each other. Wrap in cling film, making it nice and tight, and place in the fridge. Let them cure in the fridge for two to four days, turning the package occasionally. Slice the fish thinly, separating each piece from the skin as you finish the slice. 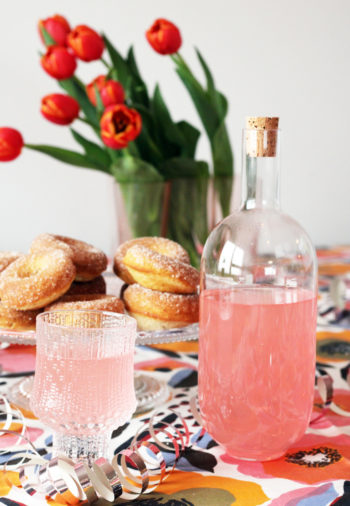 Pink rhubarb mead suits the general mood in early spring, when the days are getting longer.Photo: Piritta Kaartio

Modern Finnish mead has a very low alcohol content and is usually made with lemon and brown sugar or light muscovado sugar. I wanted to do a rhubarb version for two reasons: First, rhubarb is one of the first ingredients available in the spring. Second, it’s pink! For pink mead, you need to use a red-stemmed variety of rhubarb. Mead takes a week to mature, so it’s not suitable for an extemporaneous brunch. Make sure the bottles are clean and sterilised before filling, and remember to open the bottles a few times during the fermentation.

Wash and cut the rhubarb into pieces. Peel the ginger and slice it thinly. Put water, rhubarb, ginger and star anise in a pot and boil for 15 minutes. Sieve the juice into a mixing bowl or a large jug, add sugar and mix gently until all the sugar has dissolved. Wait until the juice is at room temperature, then take a few decilitres of juice and dissolve the yeast into it. Mix it back into the whole batch. Cover and place at room temperature for one day. After making sure that the bottles are clean, add 1 teaspoon of caster sugar for each one-litre bottle and fill with rhubarb juice. Do not close the bottles too tightly. Store them in the fridge and remember to open and reclose the bottles a few times during fermentation. The mead is ready in approximately one week. 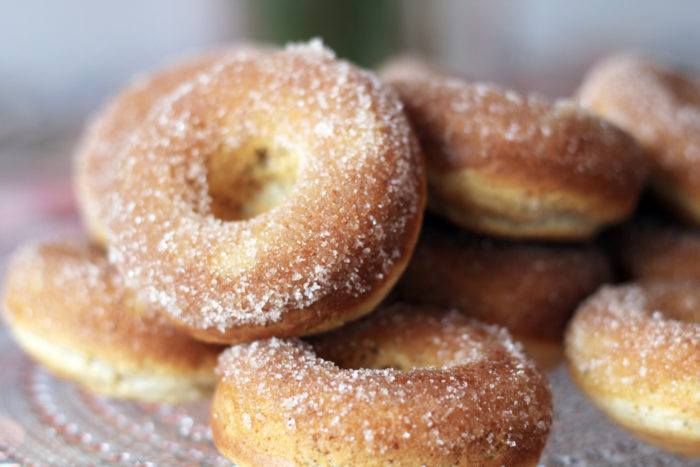 The classic Finnish munkki is made with cardamom-seasoned dough deep-fried in coconut oil (the same dough as the korvapuusti cinnamon buns and cinnamon-roll cakes shown elsewhere on ThisisFINLAND). I wanted to avoid all the hassle of kneading the dough, letting it rise, and deep-frying in a home kitchen. You can easily make these oven-baked doughnuts within an hour. Of course, it’s not the same thing, but it’s close enough and much simpler. For this recipe, you need a doughnut baking pan, but in a pinch you can use a muffin pan, although of course the resulting shape won’t be the same. The batter can be seasoned in many ways, and so can the topping. Here I’m using cardamom in the batter and cinnamon sugar for the topping.

Preheat the oven to 200 degrees Celsius (390 Fahrenheit). Put the butter in a small pot on medium heat, whisking frequently until the butter is light brown, then pour it to a small bowl. In a mixing bowl, whisk together the milk, 40 g of browned butter and the egg. Mix all the dry ingredients together separately, then add them to the milk mixture and stir until combined. Grease the doughnut pan and spoon batter into the forms until they are a little more than three-quarters full. Bake for eight minutes. Let the doughnuts cool for five minutes before tapping them out of the pan.

For the topping, gently warm the rest of the brown butter. Combine the sugar and cinnamon in a small bowl. Dip each doughnut first in the butter and then in the cinnamon sugar, on one side or both sides, and enjoy! 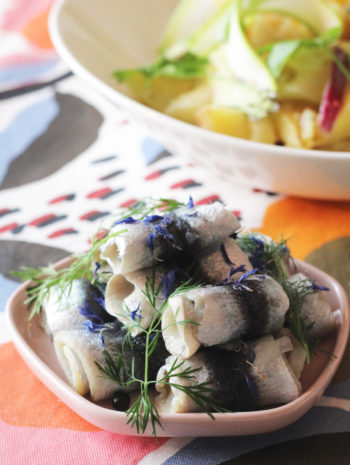 One of the most traditional ways to prepare Baltic herring is to steep it in a mixture of seasonings for several days before serving.Photo: Piritta Kaartio

This is one of my favourites, and one of the most traditional ways to serve Baltic herring. It can be made from fresh or salt-preserved Baltic herring. If using salted fillets, rinse well to remove excess salt.

Lay out the fish fillets, skin-side-down, and sprinkle salt evenly over them. Peel the onion and slice it thinly. Put water, sugar and vinegar into a saucepan and bring it to a boil, then remove it from the heat. Add onion, bay leaves and allspice to the hot brine and let it cool to room temperature. One by one, roll up the salted fillets and layer the rolls in a clean glass jar.

Once the brine has cooled to room temperature, pour it over the rolled herring fillets, then place in the fridge. This “shoemaker’s salmon” can be enjoyed the following day, but a few more days in the fridge makes it perfect.