A Finnish May Day funnel cake, or “tippaleipä,” is a knot of crunchy, golden brown pastry sprinkled with powdered sugar.

Every year on April 30 and May 1, people in Finland gravitate towards holiday-appropriate fried pastries and sparkly drinks.

May Day is known as Vappu in Finnish and Valborg in Swedish, which is also an official language of Finland. May 1 is Labour Day in honour of workers, but for generations Vappu has also been celebrated as a two-day outpouring of festive emotions to mark the arrival of spring. A number of classic foods and drinks are associated with the holiday. [See also: our May Day brunch recipe article.]

The fun of golden funnel cakes 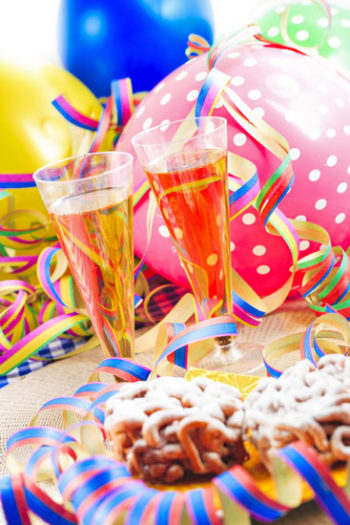 Finnish May Day funnel cakes are called tippaleipä (literally “drip bread”). You make them by pouring batter through a funnel or pastry bag and frying it in hot oil. The result is a fist-sized knot of crunchy, golden brown pastry which is customarily sprinkled with powdered sugar.

Every Finnish grocery store carries funnel cakes beginning in mid-April. Some bakeries are proud of their long history of making them: bakery and chocolatier Fazer boasts about having used the same recipe since the 1960s.

Many Finns prefer to make their own instead of buying the packaged variety. Purists will of course tell you that warm, fresh tippaleipä is the best kind. 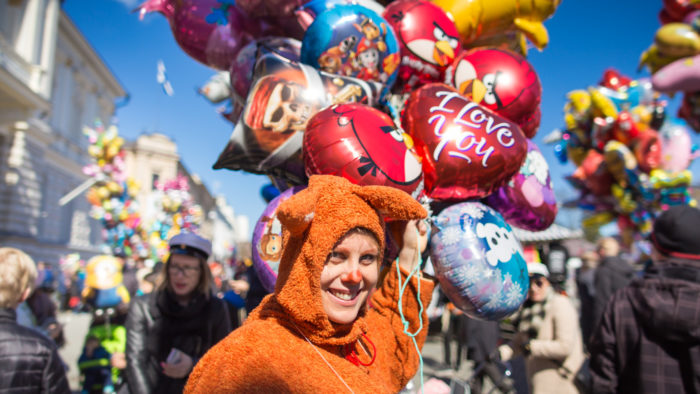 Festive atmosphere: On Vappu, you might meet a bear selling balloons downtown in the southern central Finnish city of Tampere.Photo: Laura Vanzo/Visit Tampere

Doughnuts are another fried food customarily consumed on May Day. The Finnish version is called munkki. The word means “monk,” and legend has it that the name refers to the similarly brown colour of monastic robes or the round shape of the monks themselves, or both. A munkki is slightly more substantial than the product you’d typically find in a North American doughnut shop.

Many varieties exist, both yeast doughnuts and cake doughnuts, sometimes filled with jam or covered in sweet icing. However, the time-honoured May Day munkki is a hearty yeast doughnut rolled in sugar right after frying.

Grocery stores sell doughnuts and smaller doughnut “holes,” but many Finns make them at home. A common practice is to make doughnuts on the morning of May Day so you can bring them with you to an afternoon picnic.

Mead is an ancient alcoholic beverage created by fermenting honey with water. Finland has its own unique May Day variety called sima. The modern Finnish version generally has very low alcohol content and is made with sugar instead of honey.

A dozen commercial varieties appear in shops at the same time as boxes of tippaleipä hit the shelves, but all sima has similar characteristics. It’s always golden or light brown, and bubbly from yeast fermentation. The taste contains a hint of lemon and raisins. Old-school versions are unfiltered and slightly cloudy from the yeast.

Usually a sparkling day for a picnic 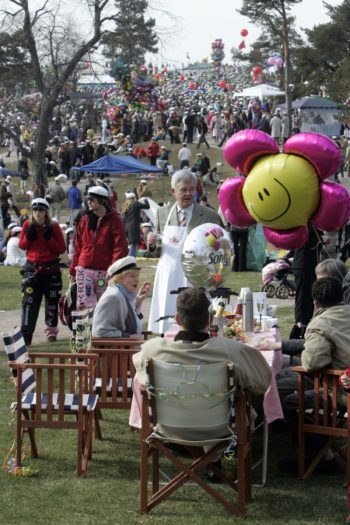 Some May Day picnickers go to great lengths, bringing furniture and white tablecloths to the park.Photo: Jussi Nukari/Lehtikuva

The raisins are particularly important if you make your own sima, because as the yeast ferments, tiny bubbles cling to the raisins in the bottle. When the raisins float to the top, you know the sima is ready to drink.

And lest we be accused of neglecting to mention the obvious: champagne and other sparkling wines also enjoy great popularity on Vappu.

May Day is characterised by picnics as long as it isn’t raining or snowing – although a significant proportion of committed partyers proceeds to picnic no matter what the weather. And yes, some years do witness snow flurries on May 1, although we can remember many sunny May Days, as well.

Finns take typical picnic food: meatballs, hotdogs, potato salad, pickled herring and new potatoes. Sometimes they even cook sausages on portable grills in the park. It is not uncommon for people to go to great lengths to make it a special occasion, such as setting up tarps and tables with white tablecloths in Kaivopuisto, Helsinki’s waterside park.

Despite the variety of food people serve at May Day picnics, from snacks to fine cuisine, the holiday wouldn’t seem complete without the classics: funnel cakes, doughnuts and mead. If you feel adventurous in the kitchen, you can celebrate your own Finnish May Day no matter where you are in the world.

Every spring a magazine written and illustrated entirely by schoolchildren arrives like a breath of fresh air. It’s a longstanding tradition, especially in southern Finland.