Virve Räisänen is the owner and head chef of Restaurant Sunn, across the square from Helsinki’s landmark Lutheran Cathedral. She shares the secrets of Finnish summer cuisine with us.

The Finnish summer means spending long days outside, relaxing at the summer cottage and enjoying fresh, seasonal cuisine (recipes below).

If you ever have the pleasure of being invited to a Finn’s home or cottage in the summertime, you’ll find a great many delights to satisfy your taste buds. A significant part of enjoying summer involves being outdoors, as well as the activity of grilling or barbecuing.

“In the summertime Finns love their sausages and their new potatoes,” states Virve Räisänen, owner and head chef of Helsinki’s Restaurant Sunn. “Actually, summer officially starts for Finnish cuisine with the arrival of new potatoes.”

“New potatoes” refers to potatoes harvested early, while still small, considered a special delicacy. Given the Finn’s reputation for being forthright, it comes as no surprise to learn how they enjoy their potatoes. “First you boil them with lots of salt and dill – nothing else,” Räisänen explains. “Then serve them with butter – some people use onion, but butter is the main ingredient.” 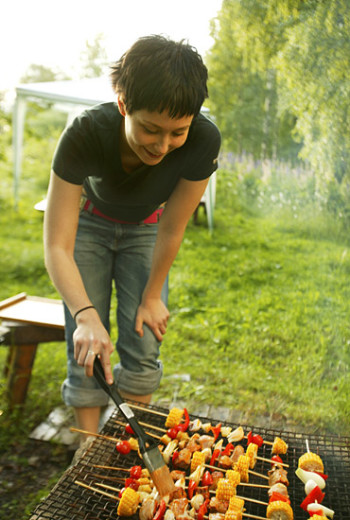 Grilling or barbecuing forms a staple of Finnish summer, when people try to spend as much time outdoors as possible.Photo: SRE

Finnish summer cuisine includes a range of sausages – and yes, they have been known to cook them on the sauna stove; it’s not unheard of. Fishing is also a popular way to while away the long summer days. Many summer cottage residents prepare the catch of the day in their own smoker, with pikeperch frequently finding its way onto the dining table.

Meanwhile, the abundance of fresh produce available around the country during the warmer months facilitates all manner of culinary indulgence.

“Finnish people eat more vegetables in the three months of summer than during the rest of the year,” Räisänen says, laughing. “Fresh peas are very good. We have a summer soup in Finland, which is all about utilising peas and potatoes as the main ingredients.”

This enthusiasm for fresh local produce also extends to the numerous wild herbs that grow here, which are free for everyone to forage, alongside numerous varieties of berries and mushrooms for which Finland is renowned. Finns pride themselves on being able to make use of much of what nature has to offer. Interestingly, perhaps one of the least likely seasonings is found in the shape of the stinging nettle plant. Harmless and tasty when cooked, it acts as a common summer starter dish, appearing in soups and even pancakes. 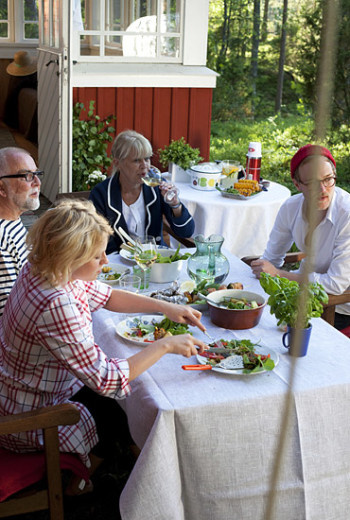 A common summer scenario: It’s a treat to eat outside during the warm months.Photo: Visit Finland

The centrepiece of the Finnish warm season comes in the shape of Midsummer, the longest day of the year, which sets off all manner of celebrations around the country. Giant bonfires are lit alongside lake and ocean shores nationwide as friends and family gather to mark this annual tradition.

Naturally, food also plays a big role. While Räisänen now spends her Midsummers bringing cottage-style celebrations to the capital region at her restaurant, her childhood memories of the event include one notable treat.

“Every family has its own traditional recipe of muurinpohjalettu, which is passed down from one generation to the next,” says Räisänen. “These are buckwheat flour pancakes, a Finnish crêpe, prepared in a really rustic way in a big pan over an open fire. The thinner you can get them, with a really crispy edge, the better they are. Fold them in four, and put fresh cream and strawberries on top.”

Good company, warm weather and good food – all of this and more is on offer during the Finnish summer.

Still hungry for more? You’ll find other great articles about the Finnish cuisine scene below, after the recipes. 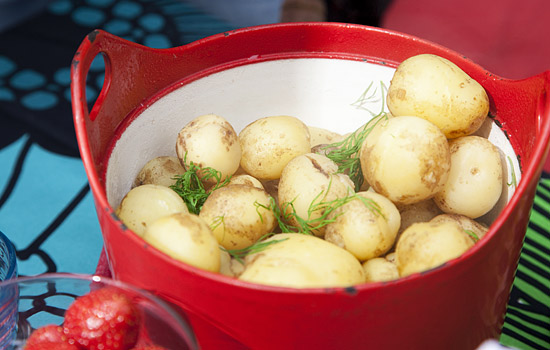 Wash potatoes well (Virve recommends the potato variety called siikli if you’re in Finland), but leave the peel on. Bring water to boil, making sure it’s salty enough, almost like seawater. Add potatoes and simmer for ten to 15 minutes depending on the size. Always try to use potatoes of about the same size.

Turn stove off, add fresh dill, put lid on and let potatoes steep for at least ten more minutes. Make sure they’re soft. Drain and serve immediately with salty butter, spring onion and more fresh dill if desired (the perfect accompaniment for every summer dish). Finns especially love these potatoes served with herring, smoked fish and mushroom sauce. You can serve them straight from the pot.

This soup can be made properly only around Midsummer, when all of the vegetables are sweet and fresh, but it is very dear to the Finns and can also be seen on menus throughout spring and summertime. Every house has a recipe of its own, but the key is to use ingredients that are fresh from the garden.

Wash and chop all the vegetables to spoon size. Add salt, potatoes, carrots and onion to milk and bring to boil. Simmer for about ten minutes. Add butter, cauliflower and peas. Boil for another five minutes. Season with fresh parsley.

Ideally – and originally – prepared over an open fire in a special cast iron pan, this pancake has crispy edges and is fried so thin that it’s almost transparent. These days any pan will do, but if possible cook them outdoors – it’s an important part of the magic.

Beat milk and eggs together with sugar and salt. Add flour and butter and let sit for at least one hour – even overnight will do. Heat pan and fry pancakes with butter, trying to make them as thin as possible and beautifully brown on both sides. Fold in four and enjoy with your topping of choice.

Helsinki brings on the brunch

What could be better than brunch? We tour the capital’s best brunch locations, from the traditional to the edgy.

Do try this at home: We present the best of traditional Finnish cooking in recipe format.