Alma Pöysti plays artist and writer Tove Jansson in the movie Tove, set in Helsinki during the post-war years.

The movie Tove (premiere October 2, 2020 in Finland), takes place in post-war Helsinki during a formative period in Jansson’s life.

Tove Jansson (1914–2001, played by Alma Pöysti) became internationally famous as the inventor of the Moomins, characters that appeal to children and grown-ups alike. In addition to writing and illustrating the Moomin books, the Swedish-speaking Finn also received acclaim for her paintings, comic strips, novels and short stories. (Swedish is one of the official languages of Finland, and Tove was filmed in Swedish.)

Both of Jansson’s parents were artists – her mother worked as an illustrator and her father as a sculptor. Born in Helsinki, she studied at leading art academies in Stockholm, Helsinki and Paris.

She first published a storybook while she was still a teenager, and proceeded to work as an illustrator and political cartoonist for periodicals. Jansson also made a career as a painter. The first Moomin book, The Moomins and the Great Flood, appeared in 1945, at the beginning of the period covered by the film Tove. 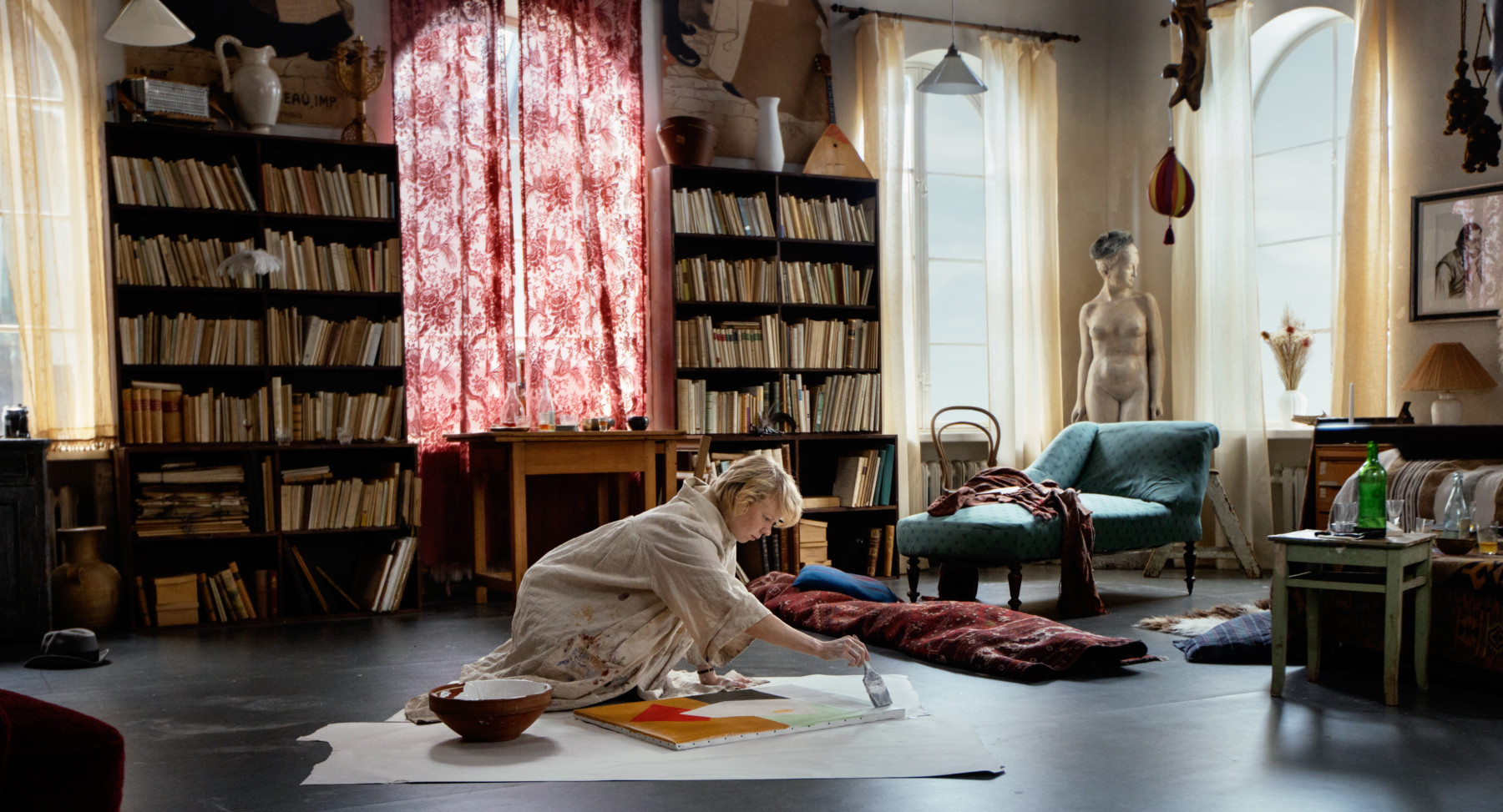 Tove Jansson (Alma Pöysti) works on a painting. This scene was filmed in Jansson’s actual studio, which still stands much as she left it, in central Helsinki.Photo: Tommi Hynynen/Nordisk Film

In the 1940s, Jansson was briefly engaged to politician and philosopher Atos Wirtanen (played by Shanti Roney), who is said to have been the inspiration for the Moomin character Snufkin. She also had an affair with Vivica Bandler (played by Krista Kosonen), a married theatre director. Jansson symbolised herself and Bandler in the Moomin stories as the tiny, identical creatures Thingumy and Bob. Later Jansson met Tuulikki Pietilä (played by Joanna Haartti), the graphic artist who would become her life partner, and who formed the basis for the character Too-Ticky.

Screenwriters Eeva Putro and Jarno Elonen decided to set Tove, the first feature film about Jansson, during the decade following the war. (Putro also appears in the film, as Jansson’s friend Maya Vanni.) The focus on a lesser-known period of the artist’s life is one of the things that drew director Zaida Bergroth to the project.

“It felt important to focus on a part of Tove’s life about which people might not necessarily have had any prior knowledge,” Bergroth says. “Tove’s relationship with…Atos Wirtanen, her falling in love with a woman for the first time, and the cross-draught between her painting career and the Moomins were of great interest to me.”

Bergroth says she “felt a connection” to the movie’s themes, which deal with Jansson’s “efforts to control her own emotional life and to be free and independent both in love and as an artist.” 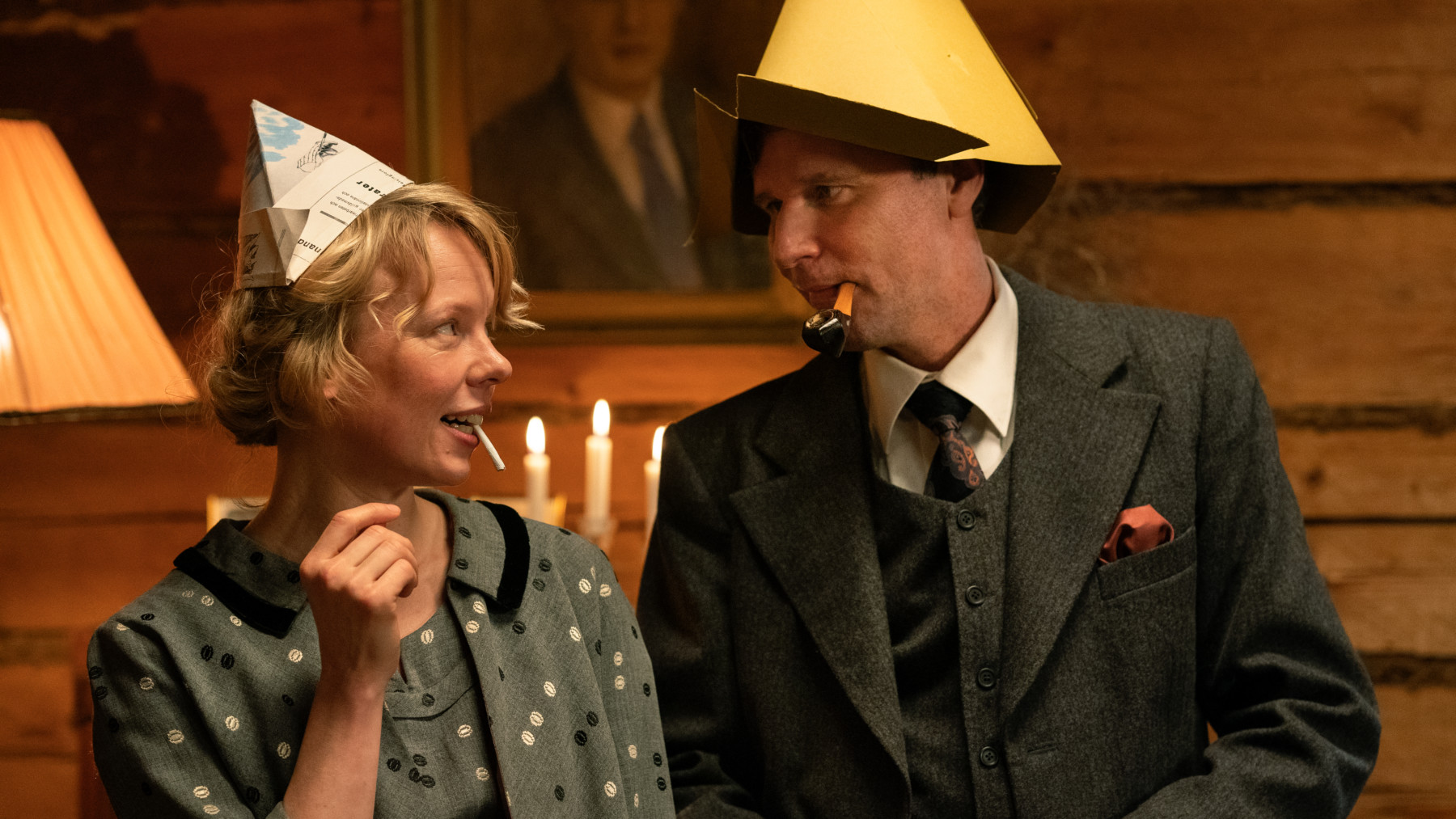 “In terms of Tove’s paintings, the era we depict in the film is interesting,” says Bergroth. “I think the time we focus on, the decade after the war, was probably not her strongest as a painter. This intrigued me, prompting me to examine what the reason could have been.”

Bergroth, born in the central Finnish village of Kivijärvi, is herself from an artistic family. Her mother is a painter, and Bergroth has moved in artistic circles from a young age.

“Our lives followed the rhythm of my mother’s exhibitions: an intense painting phase followed by the culmination of opening-night excitement,” she says. “Receptions, sales, time to recuperate and then another intensive painting phase.”

They often held parties. “In addition to visual artists, her circle of friends included writers, musicians, directors, and actors,” says Bergroth. “In fact, Vivica Bandler once joined us for a party.”

Finding out about Tove 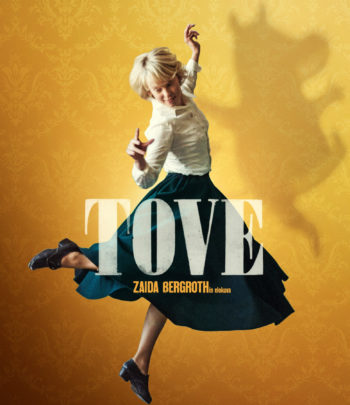 Director Zaida Bergroth says of Tove Jansson, “She really appreciated dancing and loved to do it a lot. So remember to dance!” The shadow behind Jansson on this cinema poster shows the shape of a Moomin.Photo: Nordisk Film

Taking on the challenge of directing the biopic about a national treasure such as Jansson is no mean feat. When producer Aleksi Bardy initially approached Bergroth about the project she was “quite pleased to be offered such a fantastic opportunity,” she says. “But I was also unsure about it.”

She launched into an intensive research process: “It was important to me to be able to establish a strong personal connection to Tove’s world and the themes that the movie addresses.” She visited Jansson’s high-ceilinged, tall-windowed Helsinki studio along with producer Andrea Reuter, photographer Linda Wassberg and scenographer Catharina Nyqvist-Ehrnrooth.

“I read the biographies by Boel Westin and Tuula Karjalainen,” says Bergroth. “I read Tove’s letters to her friends, loved ones and family members, and spent time in the archives of the national broadcasting company, Yle, watching video material about Tove, Vivica Bandler, Atos Wirtanen and the Helsinki art scene in the 1940s and ’50s.” 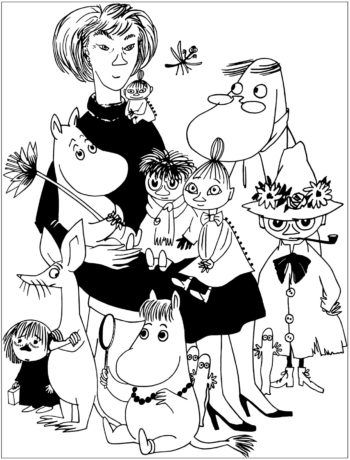 Tove Jansson drew this picture of herself surrounded by various Moomin characters, including Snufkin (at right, with hat), who is said to have been inspired by Jansson’s friend Atos Wirtanen.Illustration copyright Moomin Characters Ltd

Bergroth also got to know Jansson better by studying her paintings, frescoes and books. “I watched various documentaries,” she says. “I listened to the music Tove herself loved to listen to. We received feedback on the script from Tove’s niece, Sophia Jansson.”

Reflecting on the success of the Moomins, Bergroth draws on Jansson’s philosophical musings. “I think that this combination of lightness, humour, and surprising gravity appeals to adults and children in a special way,” she says.

On the basis of the background research, “I felt that we were free to be playful and to create our own story,” says Bergroth. “Playfulness and joyfulness were important to Tove when it came to any kind of creativity. I took that as my own guideline, too.”