You’ll see Moomin mugs in almost every kitchen in Finland.

The first Moomin book, The Moomins and the Great Flood, appeared in 1945. The eccentric characters proceeded to win the hearts of people around the world and became a treasured part of Finland’s culture.

The inventor of the Moomins was author and artist Tove Jansson (1914–2001), a Swedish-speaking Finn (Swedish is one of Finland’s official languages). She subsequently wrote and illustrated eight additional books about the characters, as well as several picture books and numerous comic strips.

Over the decades a wide variety of Moomin-related products and spinoffs have appeared, including toys, comic books, TV series, and collectables. The southwestern Finnish town of Naantali boasts a theme park called Moominworld, and the central-western city of Tampere is home to the Moomin Museum.

One of the biggest Moomin-product success stories in Finland takes the form of ceramic mugs. Their popularity was initially something of a surprise, but they became sought-after collectables.

Finnish ceramics company Arabia has been producing Moomin-themed mugs and dishes since 1990. Whenever a new Moomin mug comes out, people queue up outside designated shops to get their hands on the brand-new cups. But why exactly are the mugs so popular?

How it all began 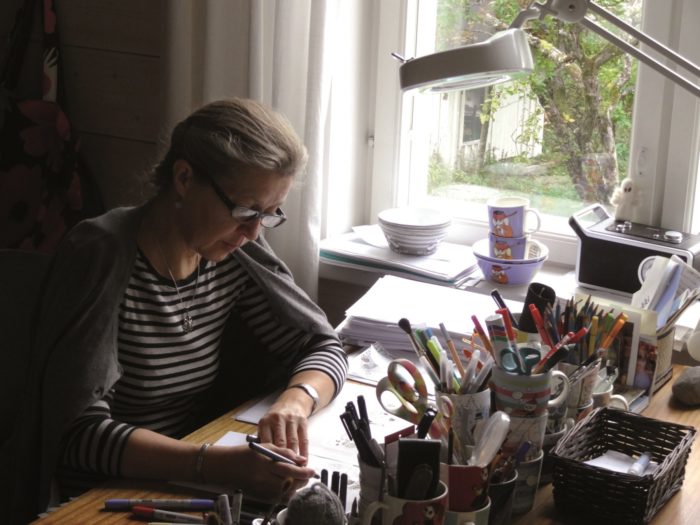 It takes Tove Slotte three months to design the artwork for a new set of products. Photo: Markku Toikkanen

Tove Slotte has been the designing artwork for Moomin mugs ever since the first ones appeared in 1990. She was working for Arabia as a designer when the product manager came up with the idea of Moomin-themed dishes. It was only natural that she asked Slotte to design the artwork, since the two had previously talked about their mutual love of the Moomin books.

The first few enjoyed a positive reception. While the Moomins already had a following in Finland and numerous other countries, a Japanese-produced animated series fuelled a new Moomin boom in Finland in the 1990s and further extended their global fame. The mugs started gaining popularity, too, and by the time the third set was released, they were becoming a standard feature in Finnish homes. Arabia has now produced more than 100 different Moomin mugs, and Slotte has designed the majority. 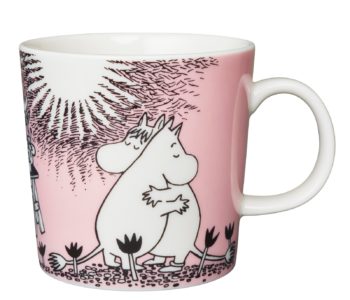 The most popular Moomin mug is the pink one entitled “Love.” It has been in continuous production since 1996.Photo: Tosikuva/Fiskars Finland

“When we first started producing the dish sets, we met with Tove Jansson to get her approval,” Slotte says. “She was an idol of mine, so I was quite nervous about meeting her, but she turned out to be a very warm person.” Jansson was promised that her own illustrations would be the basis for the mugs, but Slotte does the rest of the work: she combines elements from multiple pictures and designs the background and colour themes. The inspiration and ideas come directly from the Moomin books, which she regularly scrolls through – so often that she pretty much knows them by heart.

To Slotte, the mugs represent her life’s work. Moomins have always been important to her, and even as a child, she loved drawing the Moomin characters. She has a guess about why the Moomins and the mugs resonate so closely with Finns: “Finns feel a connection with the Moomin family, because they value similar things, such as family and nature. Moomins often do things that Finns also enjoy: they go on adventures, camp in the archipelago, or head out to the woods.”

Moominvalley is a home to a variety of eccentric characters, and everyone can find a character they can relate to. “My personal favourite character has varied over the years,” says Slotte, “but currently I’m quite fond of Misabel, a melancholic housemaid, who has a strong side that comes out when she lives with the Moomin family. Last year I finally got to design a mug featuring her.”

It is important to Slotte that the mugs bring people joy. She occasionally follows online groups where people discuss, buy and sell Moomin mugs. “Most people say that the mugs are something they really like owning, and that they use them all the time. They’re not just decorations.”

Mugs with a meaning 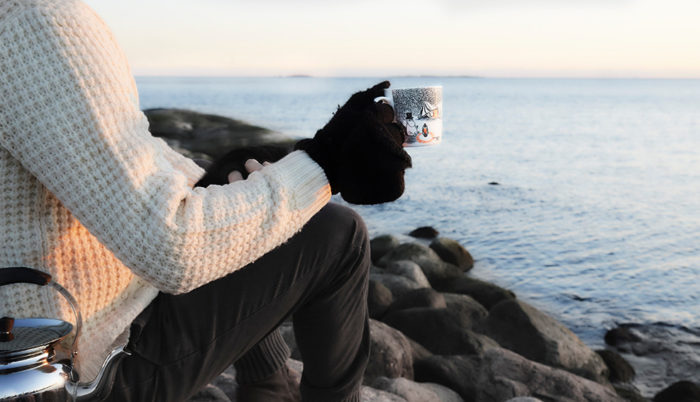 Finnish people feel a connection to the Moomin characters. Both Finns and Moomins like to spend time outdoors enjoying nature. Photo: Mindre.fi/Fiskars Finland

Salla Korvanen wrote her master’s thesis about the meanings attached to the Moomin mugs, and we asked her about the reason behind their popularity. Korvanen herself collects Moomin mugs, and the idea for her thesis came one night when she had friends over and offered them coffee.

She told them to choose a mug, and they all began discussing the Moomin mugs, paying no attention to any of the other cups. “I started to wonder why that was,” she says. “I wanted to find out what types of cultural meanings are attached to the mugs by the people who collect them.”

Korvanen interviewed nine Moomin mug collectors and found that the meaning they attached to the mugs always had to do with emotions. “People aren’t buying the mugs out of necessity,” says Korvanen. “They’re buying them because the mugs evoke feelings.”

Stories beneath the surface 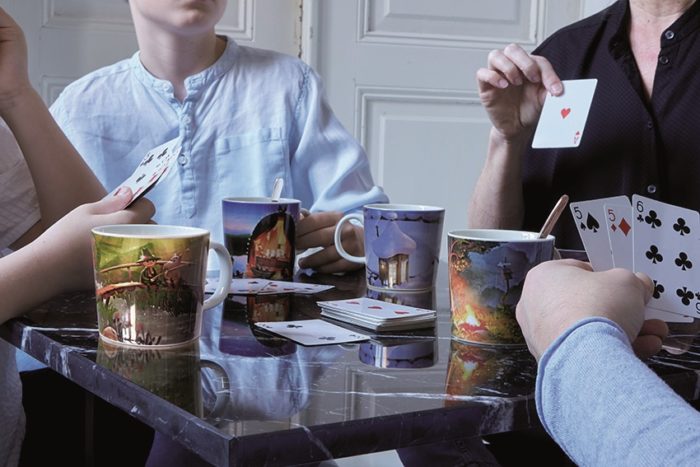 The mugs also have a social side to them: you can let your friends choose their own mugs when you serve them coffee. Photo: Mindre.fi/Fiskars Finland

In her interviews, Korvanen discerned three major reasons why people felt so strongly about the mugs. Firstly, people felt that the mugs related to their own lives and histories, and brought back nostalgic memories. Secondly, people mentioned that the notions and values that are commonly associated with Moomins were important to them. Thirdly, there’s a social side to owning Moomin mugs. “You don’t just collect mugs and hide them away,” Korvanen says. “You drink coffee with friends and let them choose a mug, and you can also talk about the mugs with your friends.”

Korvanen believes that the popularity of the Moomin mugs is due to successful branding from Arabia: when people buy the mugs, they feel like they are buying the meanings and values that Moomins represent, as well as a reliable product. “You’re not just buying a mug, you’re buying the whole story”, she says.

Slotte agrees: “The importance of the mug comes from the story. I often think it would be nice if people would read the story behind the mug. The illustrations on the mugs are not just a surface; they have deeper meanings, which is why people are attracted to them.”