The Moomins on the path to adventure, from left: Moominmamma, Moominpappa, Moomintroll and the Snork maiden.

Sophia Jansson, niece of Moomin creator Tove Jansson, oversees Moomin Characters Ltd, a company that has a hand in thousands of products worldwide but sells only one thing: Moomin rights.

Moomin Characters Ltd grew up more or less organically alongside the Moomin books and comic strips that Tove Jansson (1914–2001) penned starting in 1945 with the publication of The Moomins and the Great Flood (Schildts). As the Moomins caught on, product manufacturers came looking to tie in and cash in.

“In the 1950s my aunt was advised to set up some sort of company,” says Tove’s niece Sophia Jansson, creative director and chairman of the board at Moomin Characters. “She realised she didn’t want to be handling certain things because she wanted to dedicate herself to writing and painting.”

At the time of writing, in 2010, as the Moomins celebrate the 65th anniversary of their first book, “how we conduct business is the same,” Jansson says. Just five people work for the company, but its commercial agent and the three Moomin Shops employ dozens more.

Moomin Characters doesn’t own any factories, but it influences what is produced and benefits from the sales. “We’re selling rights, not producing goods,” Jansson notes. So the Moomins – or the Janssons, actually – were outsourcing long before high-paid business consultants started using that term.

Close to their hearts 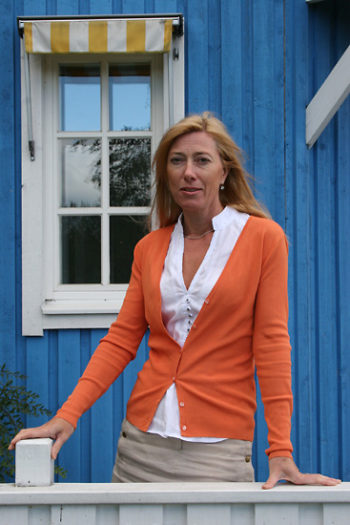 The Moomin stories and characters, while universally popular, are especially close to the hearts of readers in Finland. The Moomins amount to semiofficial national symbols, appearing on Finnish design items from Finlayson bedsheets to the Iittala Group’s Arabia-brand mugs.

Outside of Scandinavia, the Moomins’ largest fan bases are in Japan and the UK. Jansson points out that despite the characters’ special place in readers’ hearts, Moomin rights form a commercial venture – though room also exists for “exhibitions or activities on a nonprofit basis.” More than 200 companies, about 100 of them in Finland, are licensed to use the Moomin name and images for approved products.

Jansson came to Moomin Characters back in 1997. “I needed a job,” she says. “My father [the late Lars Jansson, Tove’s brother] said, ‘Why don’t you come and work for the Moomin firm?’ 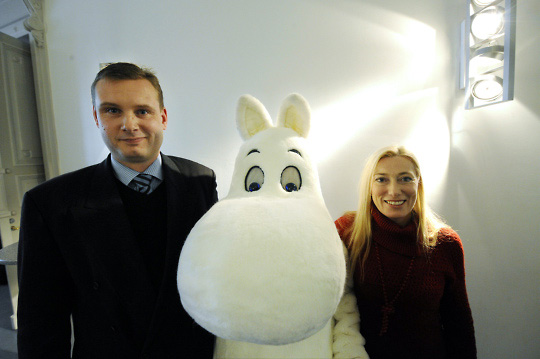 Moomin Characters Ltd approves each product and its artwork individually during planning and prototype phases. “That process has tightened up a great deal over the past decade,” says Jansson. “I enjoy the fact that more and more licensees are using Tove’s original artwork, because I think her drawings are excellent, unique and wonderful,” she says. With businesses lining up for permission, how do she and her colleagues determine what’s appropriate? “In the beginning my aunt decided what was a viable Moomin product, then my dad. In general I think our values and guidelines haven’t really changed.

“You don’t use Moomin in politics, or in connection with violence. You’d like to develop Moomin products as some sort of extension of what the Moomins represent in general, their philosophy.”

The Moomins experienced a boom period in the 1990s. “In the early ’90s, the general interest was based on the animated TV series,” says Jansson. “The vast majority saw them as a character for the family’s youngest members.

“Because of the renewed popularity of the Moomins, people also rediscovered the original books and artwork. With the demise of my aunt in June 2001, people got interested in her as an artist and in the original works, as so often happens. That meant a shift in what licensing looked like and what companies were interested in doing with their products.

“From the Moomins being perceived as characters for small children, I think today the largest target group is adults. Iittala sells vast numbers of Moomin mugs, and kids don’t have that kind of pocket money.”

The Moomins have attained classic status: “They’re by no means a boom phenomenon – they’re steady sellers. We enjoy the benefits of Moomins having been around for 65 years.”

For all the talk of grown-up Moomin fans, Puffin Books is releasing a series of boardbooks for very young readers. “They’ve been quite successful selling to publishers around the world,” says Jansson. “Moomin Characters will be looking outside the Nordic countries to see how this takes off.” 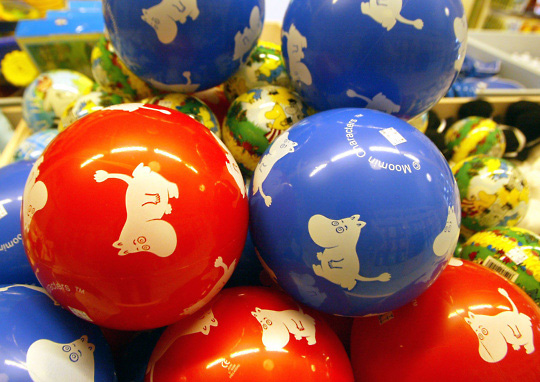 A large variety of Moomin toys exists, but the Moomins also appear on everything from T-shirts and baby bottles to design items such as tableware and bedsheets.Photo: Jussi Nukari/Lehtikuva

“Puffin has aroused interest on markets where the Moomins have been dormant for years,” says Jansson. “Generally for a character to be successful anywhere in the world, it needs a TV programme or a film. We don’t have a new TV show or really new film now, but we have this publishing programme, and we’ll just see where it takes us.”

The Puffin books form part of the Moomins’ 65th-anniversary celebrations, as do various other campaigns. Iittala is selling a special-edition Moomin mug and donating a portion of the profits to a WWF campaign for cleaner oceans.

Jansson hopes that the total donation to the WWF from Iittala and other partners will top half a million euros. On another level – one that requires no money and is open to children all over the Nordic countries – an online Moomin contest with an ocean theme encourages kids to see the world the old-fashioned way: by drawing.

“For Tove, drawing was one of the most important things in life,” notes Jansson. “Today kids are not urged to draw as much. We want to encourage enthusiasm for drawing.”

The drawing contest and campaign products show that “it’s not all about making money,” says Jansson. “It’s about giving something back to Moomin fans and others, for instance by helping take care of our oceans or getting people to discover the joy of drawing.”