Taking to the streets for a spirited Helsinki ghost walk

Halloween (October 31) is a traditional season for ghostly activity, but Helsinki’s phantom tales are spooky at any time of the year. The city’s ghost walks perpetuate eerie legends.

Karri Korppi (left) and Emil Anton organise ghost walks for Happy Guide Helsinki. They are apparently not afraid of offending the ill-tempered ghost of Josef Wolontis, who they say haunts the cellar of Kappeli, a restaurant he ran in the late 1800s.

“Helsinki is ideal for ghost stories – many buildings in the central area have their own ghost.”

This assertion by Karri Korppi, who heads up the Happy Guide Helsinki tour company, might come as a surprise. After all, Helsinki is better known for its cutting-edge modern architecture than its spooky graveyards and gloomy half-lit mansions.

Korppi explains that much of the city as we know it was built on top of cemeteries. The 18th-century Ulrika Eleonora Church and its burial ground, for example, were cleared to make way for the 19th-century Senate Square that forms a Helsinki landmark today.

The burial grounds that now serve as a pleasant park next to Old Church on the leafy street called Bulevardi are known colloquially as Plague Park because hundreds of victims of the 18th-century epidemic were buried there. However, not many people know that this site was pre-dated by cemeteries extending across the Kamppi district. 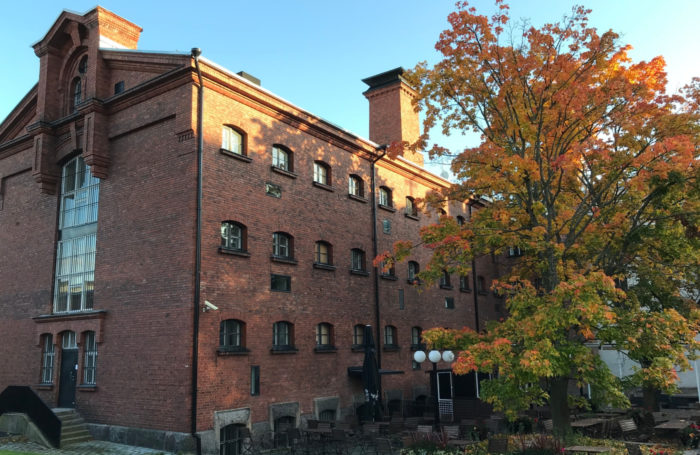 Hotel Katajanokka, located in a former prison not far from the centre of Helsinki, is rumoured to accommodate a spooky guest: a ghost who sometimes slams doors.Photo: Peter Marten

Korppi doesn’t want to reveal how, or even if, any of these locations figure in his company’s popular Helsinki Horror Walks.  “It’s a theme tour that takes the course of a drama,” he says. “We are not actors, but we build the drama so that the stories work in a certain order. But it’s not a secret that we start at the former prison in Katajanokka.”

Guests at the hotel that now occupies the former prison can rest assured that the resident ghost, although inclined to slam the occasional door, is otherwise benign. Another famous phantom, a headless colonel by the name of Aleksi, is said to haunt a building in the Kruununhaka district, holding his head under his arm and taking rides in the lift.

It’s not clear if he is the same headless soldier rumoured to roam around the island of Vallisaari, originally part of the Suomenlinna sea fortress, or if Helsinki is simply especially prone to decapitated spirits. 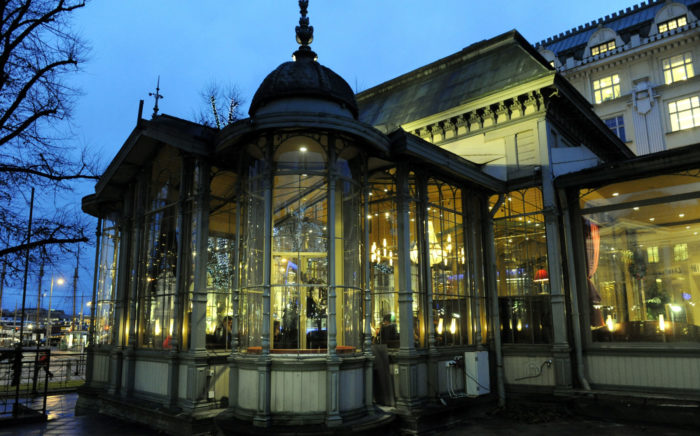 As dusk falls on a crisp autumn evening, the warm lights in Kappeli’s tall windows beckon to would-be diners; they may not know about the ghost who supposedly haunts the cellar of the restaurant.Photo: Sari Gustafsson/Lehtikuva

For phantom hunters in the Finnish capital, Happy Guide Helsinki is a prominent operator, offering both public and private tours. Another option is Helsinki City Museum’s Promenade Ghost Walk (in Finnish and occasionally in English), which sets off from the museum at Aleksanterinkatu 16 and heads towards Kamppi.

Helsinki is such a concertedly modern city that it does come as a surprise that it is home to so many ghosts. My meeting with Karri Korppi and his colleague Emil Anton takes place on the Esplanade at the elegant Kappeli, a restaurant founded in the late 1800s.

I find myself looking over my shoulder and the hairs on my neck bristle as Korppi and Anton tell me about kellarin kummitus, the cellar ghost.

As seems typical of Helsinki ghosts, this one seems to be mischievously angry rather than outright malevolent. “It’s the ghost of Josef Wolontis, who ran Kappeli in the 1880s and 1890s, when this was a favourite watering hole for composer Jean Sibelius and artist Akseli Gallen-Kallela,” says Korppi.

Wolontis would give everyone free breakfast at Kappeli on Mondays at the end of their parties. He was much liked, a kind of restaurant mogul of his day, with something of a monopoly on the restaurant scene. According to Korppi, Wolontis is the angriest ghost in Helsinki now, because his restaurants no longer hold that monopoly. Staff at the restaurant seem unperturbed at his presence, however, although several claim to have experienced his furniture-moving antics. 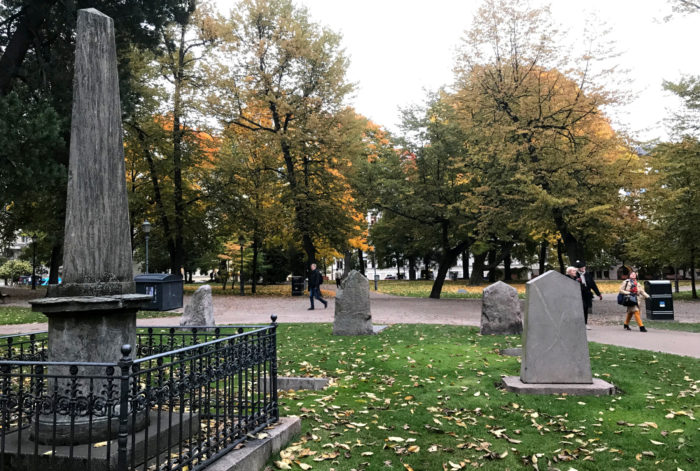 Pedestrians walk past tombstones and monuments in Old Church Park, also known as Plague Park because of the hundreds of plague victims who were buried nearby in 1710.Photo: Peter Marten

These are the kind of anecdotes that appeal to Helsinki residents and visitors alike. “Even if you have lived your whole life here, I promise you will find something you have never heard about before,” says Korppi. “We tell the alternative history of Helsinki through its ghost stories and urban legends. Those include conspiracy theories, as well as notorious murders.”

Do the lead ghost hunters believe in ghosts themselves? “I have been interested in haunting buildings and ghosts since my sister used to see a lady walking around our family house in [the southeastern Finnish town of] Kouvola,” Korppi says. “But exactly what a ghost is – that’s another story.”

“I’m open to the possibility that the spirits of dead people might manifest themselves,” says Emil Anton. “We have heard of so many experiences and so many witnesses. The cumulative experiences make me lean towards accepting rather than rejecting.”

Have you ever wondered what mythical creatures might exist in Finland’s vast forests and lakes? See our field guide.

Mysterious names on the map of Finland
Life & societyLanguage

Mysterious names on the map of Finland