Mysterious names on the map of Finland

The initially unfathomable place-names that dot the map of Finland have meanings and origins that may be straightforward or less obvious.

“In a sparsely populated country where people earlier mainly moved around by water, it was natural to name places according to their locations on rivers and lakes,” explains Sirkka Paikkala of the Institute for Languages of Finland.

Finland’s eighth-largest city, with 103,000 inhabitants, is Lahti (Bay). True to its name, Lahti lies on a bay, part of the unimaginatively named Vesijärvi (Water Lake).

Animals also feature in the names of towns such as Kontiomäki (Bear Hill), Kotka (Eagle) and Nokia. The name of the hometown of the Finnish mobile phone producer derives from an old word for dark-furred martens, whose pelts were valuable.

“The names of many of our cities were originally the name of a single-family homestead, around which settlements gradually grew into villages and towns,” says Paikkala. Many such names end in the suffix -la, meaning “place,” including Pusula (Kissing Place) and Karhula (Place of the Bear). 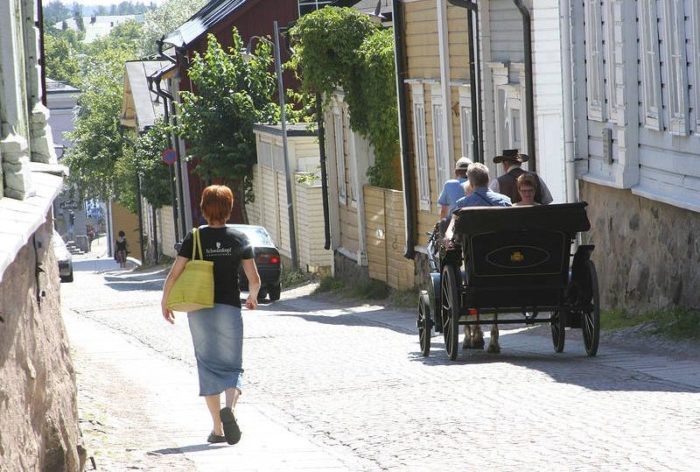 The Finnish place-name of Porvoo, a charming town less than an hour from Helsinki, comes from a corruption of the Swedish-language name Borgå.Photo: VisitFinland

Several centuries ago, traders from the Swedish region of Hälsingland set up shop by a river mouth on Finland’s south coast. Their settlement became known to local Swedish-speakers as Helsingfors (Helsing Rapids) and later to Finnish-speakers as Helsinki. The capital’s riverside birthplace lies outside the city, in the northern district called Vanhakaupunki (Old Town).

Paikkala explains that, especially in coastal Finland, many place-names were originally Swedish. Some cities have very different names in the two national languages. Finland’s former capital is known as Turku to Finnish-speakers (from an old Russian word Turgu meaning market place), while to Swedish-speakers it is Åbo (River Settlement).

Some odd Finnish names arose when tongue-tied Finns mangled older Swedish names. The picturesque old town of Porvoo is one example. Its Swedish name, Borgå, means Fort River, but Finnish-speakers twisted the tricky sounds b, g and å to make their own version. Likewise, the historic island fortress outside Helsinki, Suomenlinna (Finland’s Fortress), was called Viapori before Finland gained independence in 1917 – a Finnish pronunciation of the Swedish-language name, Sveaborg (Sweden’s Fortress).

The city of Tampere may owe its name to a Swedish word meaning “dam,” or an old Sámi word meaning “calm water between rapids.” Today the indigenous Sámi people mainly make their home in northernmost Lapland, but Sámi place-names survive across the country in areas where they lived earlier. Lapland’s largest town, Rovaniemi, has mixed etymology: rova is Sámi for a wooded hill, while niemi is Finnish for peninsula. Beautiful Nuuksio National Park west of Helsinki owes its name to a Sámi word meaning swan.

Oddities on the map 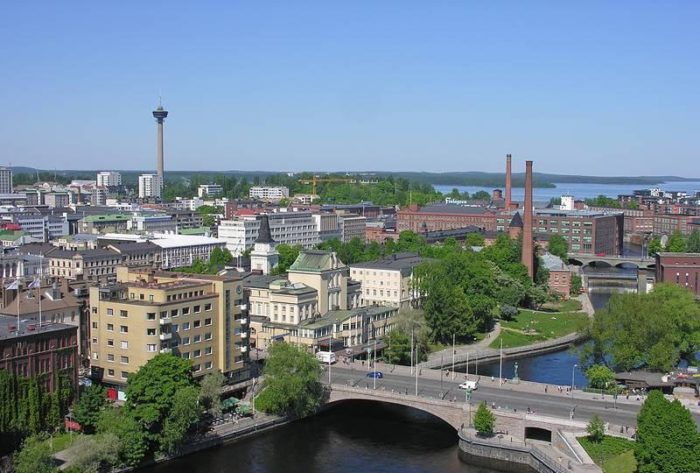 The city of Tampere may owe its name to a Swedish word meaning “dam,” or an old Sámi word meaning “calm water between rapids.”Photo: Jari Mäkinen/VisitFinland

Several towns and districts have somehow ended up with curious place-names. Visitors should perhaps take good care of their belongings in the eastern town of Varkaus (Theft). Pohja translates to “Bottom.” The railway line running into northwest Lapland ominously ends at a village called Kolari (Crash), though it was more likely named after a tar-burner (koolari) than any disaster.

Tourists may be impressed by the extent of Helsinki’s tramway network when they notice trams bound for a district called Arabia.

Finland’s shortest place-name belongs to the village of Ii (that’s the letter i twice, pronounced “ee”), on the Bay of Bothnia. Its name derives from a Sámi word meaning “a place to overnight.” The lovely village of Snappertuna is worth a visit for its name alone, though there is nothing fishy about its obscure Swedish origins.