Boggy terrain accounts for about one-third of Finland’s area. In Kauhaneva-Pohjankangas National Park in western central Finland, water has collected in a temporary pond that reflects the sky.

In Finnish, as you might know, Finland isn’t called “Finland” or anything that sounds remotely similar. The Finnish word for “Finland” is Suomi.

According to the Institute for the Languages of Finland, a number of competing theories exist about the origins of the word Suomi. Whether by coincidence or by design, it contains suo, which by itself means “mire” or “swamp” – a dominant natural habitat in many parts of Finland. Boggy terrain accounts for about a third of the country’s area, some 8.9 million hectares. It’s composed of peatland, the product of decomposing sedges and mosses building up since the end of the last Ice Age, around 12,000 years ago.

It may not sound like the most glamorous component for a national ecosystem, but the restoration and management of Finland’s peatlands represents a crucial contribution to the country’s environmental health and famed natural beauty.

The significance of swamps 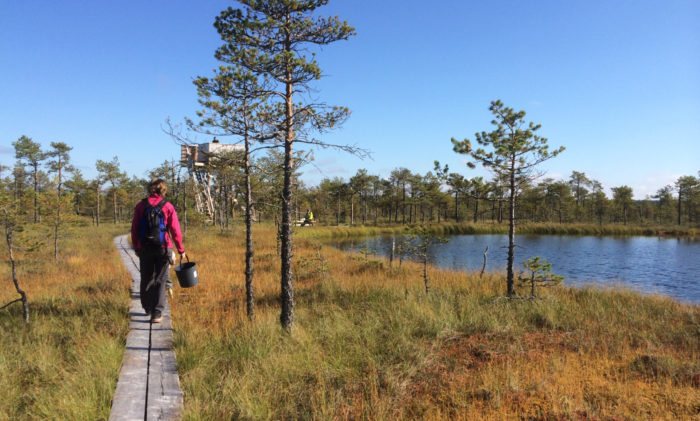 Swamps, mires and bogs are ecologically important natural habitats, and in places such as Leivonmäki National Park, in central Finland, they offer a place for people to connect with nature (note the birdwatching tower in the background).Photo: Tuomas Haapalehto/Metsähallitus

Swamps are so significant that they are included in the Helmi habitats programme, which, led by the Ministry of the Environment, aims “to strengthen biodiversity and safeguard vital ecosystem services” provided by nature and to help combat climate change. The Finnish Parliament allocated an additional 100 million euros to nature conservation in 2020, of which 42 million went to the Helmi programme. Helmi means “pearl” in Finnish.

“More than half of Finland’s peatland has been drained for forestry purposes, leaving about four million hectares undrained,” says Kaija Eisto of Parks and Wildlife Finland, the agency tasked with state-owned protected areas. It is part of Metsähallitus (which means “forest administration”), the state enterprise that manages state-owned land and water across the country.

“Peatland has been drained by digging ditches in order to improve the conditions for cultivating trees,” says Eisto. “My work includes protection, restoration and management of habitats in protected areas.” 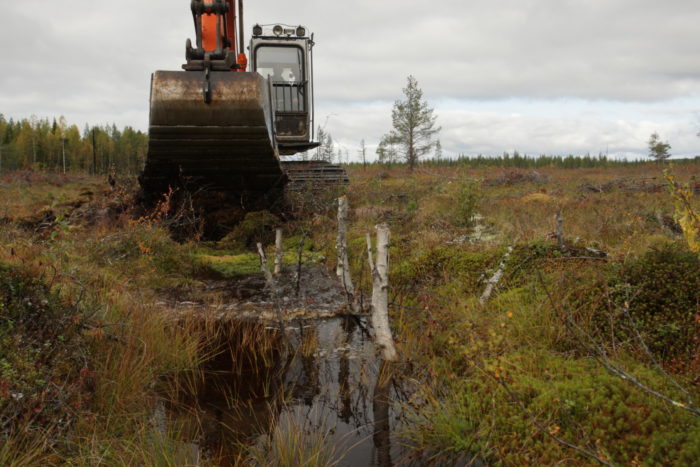 One part of peatland restoration is filling in human-made ditches to help return the land to its natural state.Photo: Philippe Fayt/Metsähallitus

Protected areas across Finland, including its 40 national parks, contain about 50,000 hectares of peatland drained before they were designated as protected areas. Of this area, about 28,000 hectares have been restored in work carried out over the last three decades.

“It was very small-scale management when it began,” Eisto recalls. “But now we have several hundred hectares being restored each year. In state-owned areas that are not protected, there has also been peatland restoration for game habitat improvement.”

The main challenge in peatland restoration is to return water to where it naturally belonged before draining.

The work proceeds in various ways, says Eisto: “When we start the planning of peatland restoration, we want to have an idea of what that peatland looked like before the drainage. We have good aerial photos with which we can compare the peatland, before and after. Most commonly, we fill the ditches using peat from the ditch banks to stop the water flow. We can also block the ditches by building dams using wood, or with the peat that was removed when digging the ditch.” 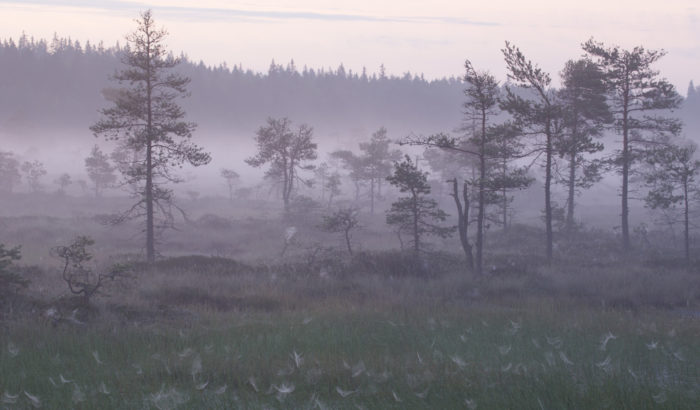 On a summer evening, mist descends on a forest and swamp in Torronsuo National Park, in southern Finland.Photo: Hannu Mäkelä/Vastavalo/Metsähallitus

The primary goal is to reestablish the right quality and quantity of water, returning the water table to its original level. “We are also aiming to improve biodiversity,” says Eisto. “In peatland that has been drained, the biodiversity is usually very low because of the lack of water. Habitat quality improves when many species – birds, butterflies, plants, mosses and natural communities – start to thrive again after restoration. And flood mitigation improves, since water is retained. Peatlands are important for game species, too.”

Climate regulation is another very important aspect, because peat in its natural habitat serves as a carbon sink, containing carbon dioxide rather than releasing it into the atmosphere. Conservationists are calling for disincentives to the burning of peat as an energy source in Finland.

Meanwhile, Eisto welcomes the funding from the Helmi programme. “We will continue the programme work until 2030,” she says, “and the first target is to restore 12,000 hectares of ditched mires by 2023, after which we will identify further targets. For so many years a lack of funding has held us back, but now we have a good budget.” 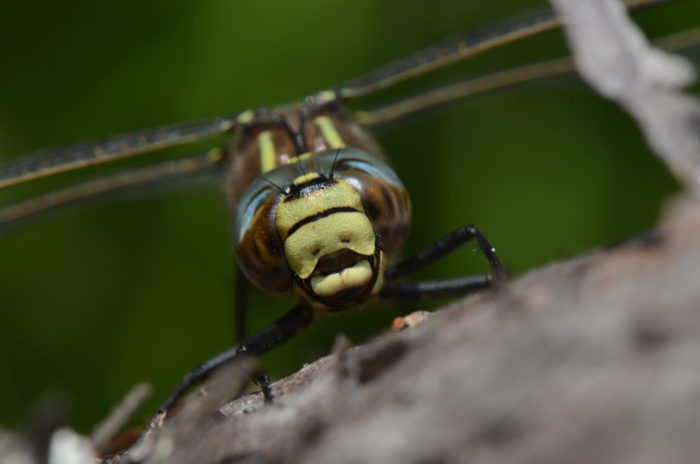 You may see the common hawker dragonfly buzz past you in swampy areas as it hunts mosquitoes. Photo: Teemu Rintala/Metsähallitus 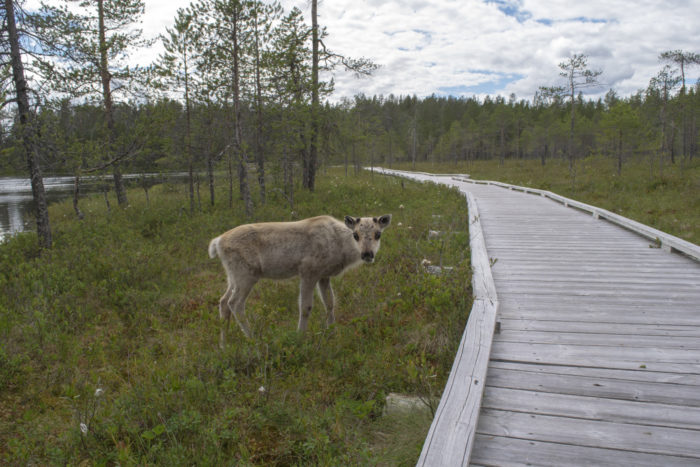 This reindeer calf is right at home in Hossa National Park, not very far from the northern town of Kuusamo. The wooden path increases the accessibility of the park, which opened in 2017 in honour of the 100th anniversary of Finland’s independence. Photo: Sirke Seppänen/Metsähallitus 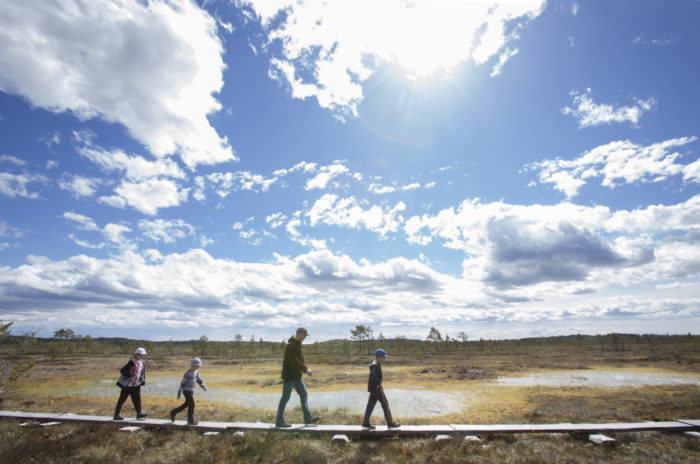 A family of hikers crosses a swamp on a duckboard path in Torronsuo National Park in southern Finland. Photo: Tea Karvinen/Metsähallitus 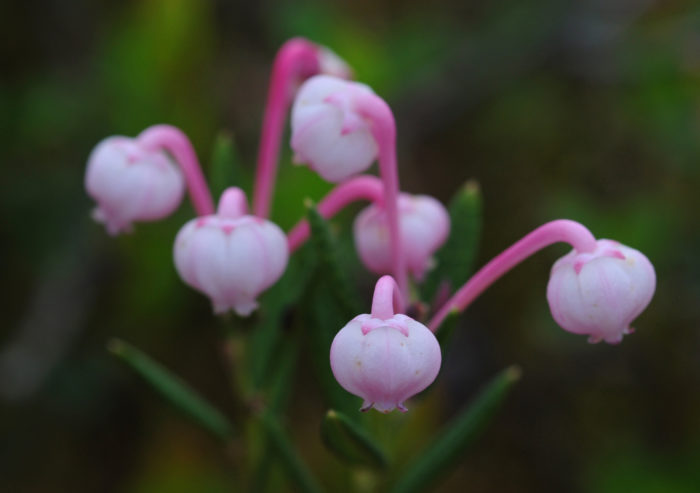 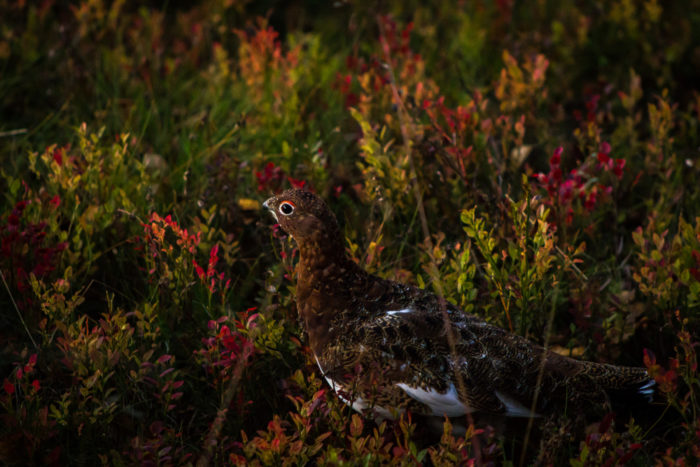 Can you spot the bird in the picture? It’s a willow ptarmigan, camouflaged by its feathers. In the winter it turns completely white. Photo: Juha Kaipainen/Metsähallitus 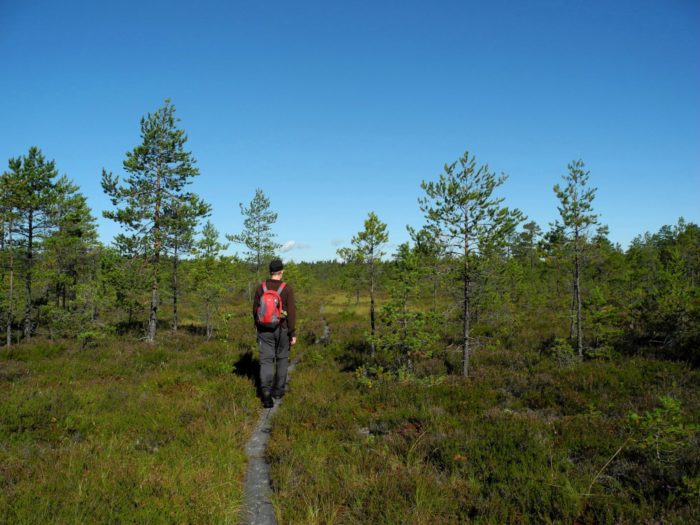 A narrow duckboard shows the solid way through the landscape in Teijo National Park in southern Finland. Photo: Mari Rivasto/Metsähallitus 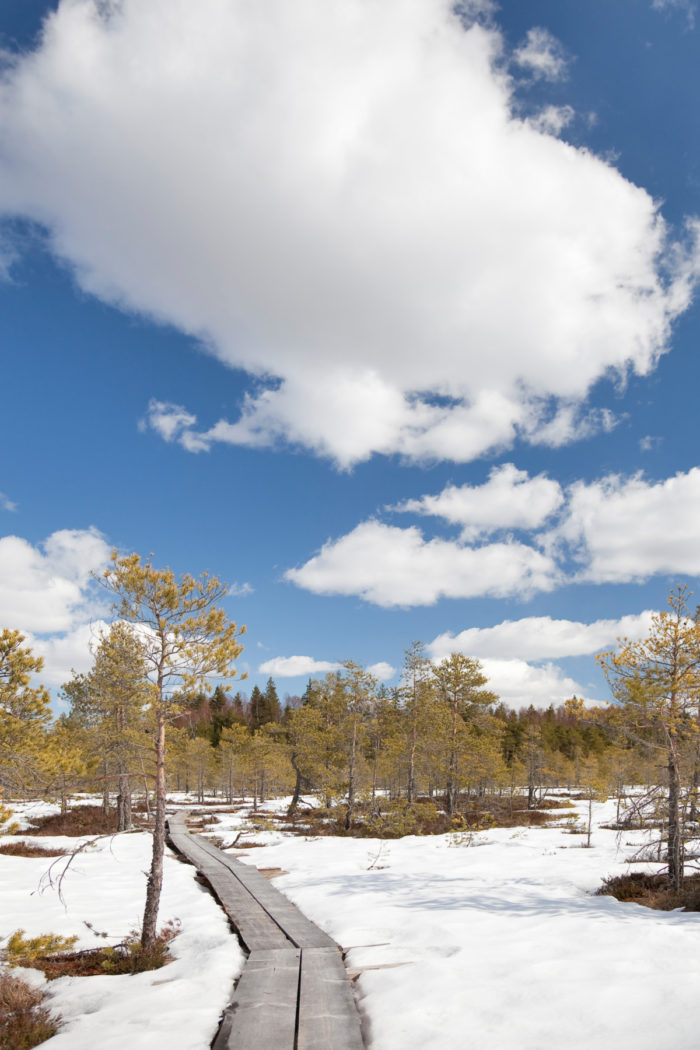 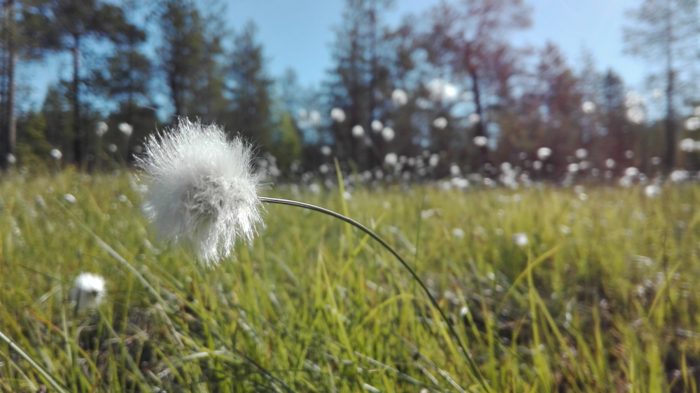 Tussock cottongrass, with its fluffy flowers, thrives in waterlogged conditions and lends an understated beauty to swampy landscapes such as this one in Hossa National Park. Photo: Marjo Kämäräinen/Metsähallitus 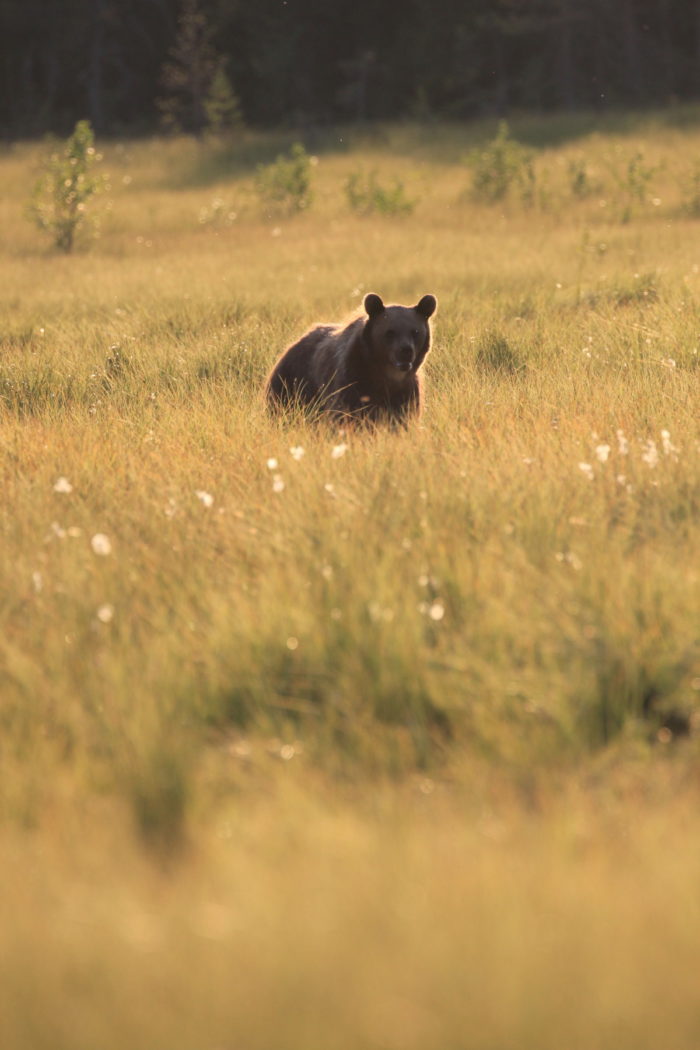 Finland is home to brown bears, but it’s uncommon to see them. This one was traversing a swamp in Kuntivaara, a nature area close to the Russian border, about 50 kilometres (30 miles) from the northern town of Kuusamo. Photo: Marjo Kämäräinen/Metsähallitus