About half of Finland’s population goes berry picking every year, and about of third of Finnish people pick mushrooms.

My eyes scanned the forest floor, looking over the moss, pine needles and yellow birch leaves. It didn’t take long before I spotted something.

“Over here!” I called. “Chanterelles.”

“Very good,” said my friend Richard. “You’re getting better at finding them.”

I was beginning to feel proud of my newfound ability to locate mushrooms, but I was soon brought back to earth. Richard’s daughter Sophie, three years old at the time of writing, trotted up to me with her hands full. She had found twice as many mushrooms as I had. 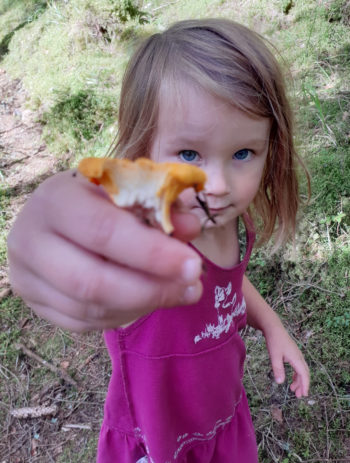 Learning to love the forest from an early age: Sophie displays a mushroom she has found.
Photo: From the family’s own collection

Finns love their forests. According to a 2017 survey, 46 percent of Finns pick berries and 32 percent collect mushrooms. They exercise “every person’s right,” the Finnish concept that formally states that you can hike and gather mushrooms and berries anywhere, even on private property, as long as you don’t disturb the environment or other people.

For several years, Richard and his family have been teaching me how to collect mushrooms safely. “Safely” is the key word, because Finland does have poisonous mushrooms.

“Identify every mushroom three times,” Richard says. “First when you pick it. Next when you clean it. Finally when you prepare it. If at any stage you are not 100 percent certain that it is an edible variety, throw it away.”

Richard, half British and half Finnish, learned how to find mushrooms from his Finnish grandfather. Bia, his wife, acquired mushrooming skills from her family in her native Estonia. Now their daughter Sophie is learning about the bounties of the Finnish forest.

“It’s a hobby we do together,” Richard says. “It’s a lot of fun when you find mushrooms. Also, we love to eat them.”

Stocking up for the winter 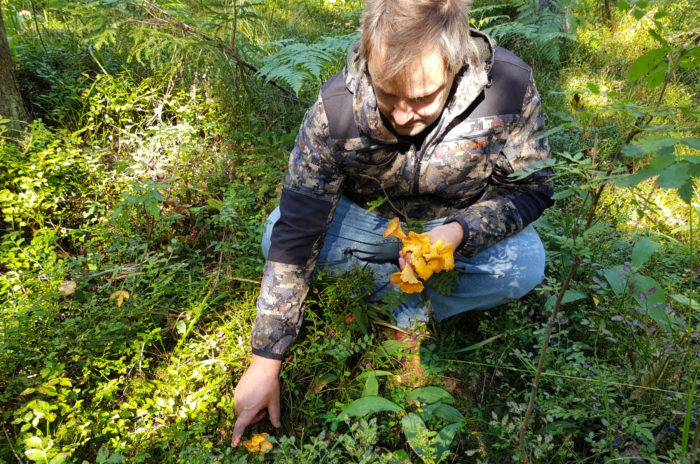 You have to know where to look, as Richard demonstrates.Photo: David J. Cord

Mushrooming season depends upon the weather, but early varieties typically appear soon after midsummer in southern Finland. Mushrooming usually ends with the first frost, but funnel chanterelles are one of the season’s last types of mushrooms and can even survive a mild freeze. There are many edible varieties of mushrooms in Finland, but I stick to ones that are simple to identify.

“We look for chanterelles in mixed birch and fir forests, with sandy soil and lots of moss,” Bia says. “You are more likely to find brown cap boletus in thick fir forests with dark soil. Orange cap boletus can be found in birch forests. This is how we search for them, but everyone has their own strategy.”

The family often eats the mushrooms immediately after collecting them, by frying them in butter and mixing them into pasta, rice, eggs or sauces. They also preserve them by freezing, drying or pickling. Their storage methods are a mix of modern and ancient, including gleaming stainless steel freezers and a stone-lined potato cellar.

“Pickled mushrooms are good for salads,” Bia says. “Dried mushrooms make good soups. I prefer freezing mushrooms, because you can do anything with them.” 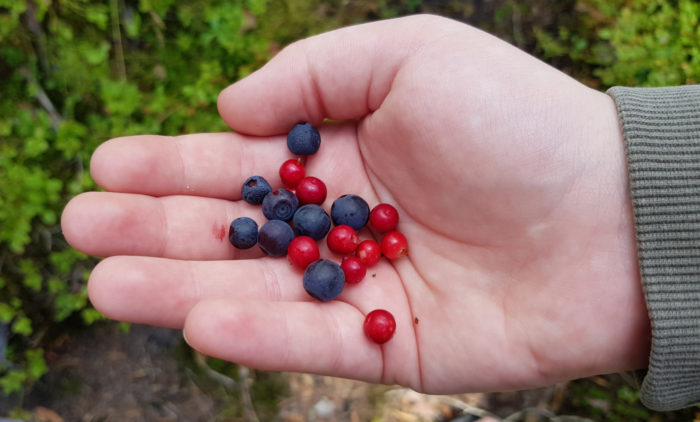 For a time during late summer and early autumn, the seasons for sweet blueberries and tart lingonberries overlap, and you can find both during the same visit to the forest.
Photo: David J. Cord

Richard is an avid hunter and fisher, and the family’s huge freezers are packed full of fish and wild game. He makes chaga mushroom tea and pine needle syrup. He sprinkles dried fireweed on steaks.

“We also make raspberry and lingonberry jam,” Richard says. “Cloudberries are good, but you need to go into swamps to find them. Sophie loves berries. She eats every wild strawberry she sees.”

“Blueberries!” she announces decisively, and displays her hands, stained blue with juice. The blueberries that grow wild in the Nordic countries are smaller than their North American cousins and are also known as bilberries. In the autumn, you’re more likely to find tart, red lingonberries.

I also love blueberries, but I’m happy to get out into the forest even when they aren’t in season. Spending time in nature is good for you – that’s a philosophy that Bia and Richard’s family also follows.

“Once my employer had Japanese colleagues visit, but they spent all their time working,” Richard says. “Finally I said they worked too much and we were going out in the forest. We left the office, still wearing our suits, to hunt for mushrooms. It was fantastic fun.

“That is something they will always remember about their trip to Finland.”

Many Finnish daycare centres arrange their activities around music, art, exercise, adventure or other themes. The overarching goal is to contribute to a good childhood, of course.