“Plogging” is a combination of “pluck” and “jog,” as in plucking up rubbish while out for a jog. The plogging movement has spread all over the world, including Finland.

Thanks, in part, to its education system and its curriculum, Finland as a nation is very aware of the challenges posed by plastic, and ahead of the game when it comes to devising solutions, says Riitta Silvennoinen of Sitra – the Finnish Innovation Fund.

However, as things stand Finland recycles about 25 percent of its plastic waste, but is strongly committed to complying with EU Waste Directive objectives: 50 percent of plastic packaging recycled by 2025 and 55 percent by 2030.

“In Finland, as in the rest of the world, we need to separate two challenges related to plastic: trash, and climate change ,” says Silvennoinen.

“They are often confused, which makes it even more difficult to decide what to do about plastic. The problem is not necessarily with plastic as a material in itself, but that it is not recycled sufficiently and properly, and that we are not getting value from it. The Ellen MacArthur Foundation, which supports innovations for the circular economy, has reported that we are losing 95 percent of plastic’s value because we are not recycling it but burning it or disposing of it in landfills.” 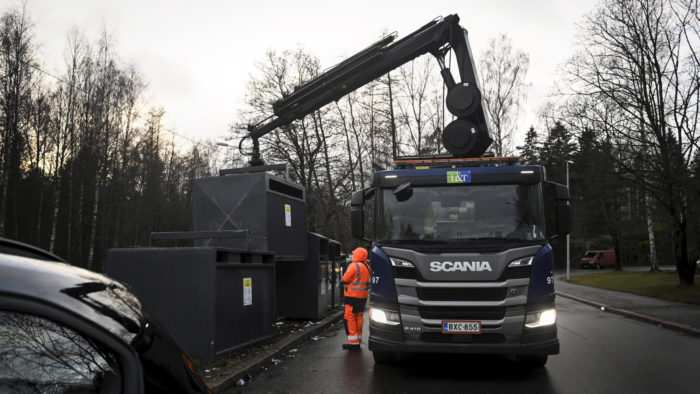 A worker in Helsinki guides a recycling container back into place by remote control after dumping a load of plastic in a truck on its way to a recycling facility.Photo: Emmi Korhonen/Lehtikuva

VTT, the Technical Research Centre of Finland, has carried out extensive research into chemical recycling. Sitra itself was involved in drawing up a Plastic Road Map in 2018, giving the issues a higher priority, covering every angle of plastic recycling, and involving stakeholders in discussions about how to improve, collaborate in, finance and develop solutions. The Ministry of Environment is promoting voluntary Green Deal initiatives. One example could be encouraging cafés and restaurants to introduce incentives for using less plastic.

“We should be recycling and reusing plastic as much as we can,” Silvennoinen says. “It can be recycled mechanically or chemically, returning it to its molecular level. Single-use plastic is a huge issue, but it is not simply a matter of replacing one material with another.”

Finnish families get to grips with trash
Life & societyEnvironment

Finnish families get to grips with trash

Finland, a leader in bottle and paper recycling, sets bold goals to cut the amount of household waste sent to landfills.