The picturesque island of Utö, Finland’s southernmost location with year-round inhabitants, has a mainstay population of about 40 people.

“No website or Wikipedia page could express what life up here is really like,” says Essi Kohtanen.

She lives in Finland’s northernmost town, Nuorgam, at just over 70 degrees north latitude. (It’s also the northernmost town in the EU.) She and her husband moved there in the autumn of 2016.

At the time of writing, Kohtanen has been working for two years as a teacher in the local school, with two colleagues. One of them teaches in Northern Sámi, one of the languages of the indigenous Sámi people, whose homeland is divided into four parts by the borders of Finland, Sweden, Norway and Russia.

Kohtanen has been teaching the Finnish-language grades four to six (ages ten to 13), a class with only two pupils at the moment. “You don’t do a lot of group work in a class that size,” she says. “A teacher needs quite an imagination in these circumstances.”

[Editor’s note: Be sure to check out our article about life in Finland’s easternmost and westernmost villages and about the country’s centre of population, too.] 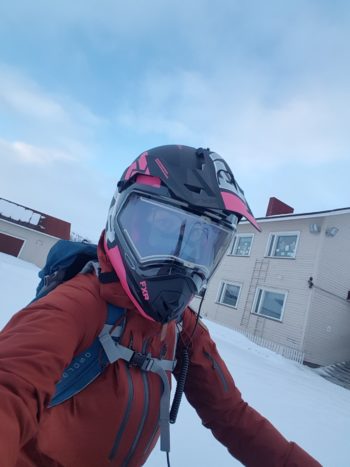 In this winter selfie, Essi Kohtanen has just commuted to her job at the local school (visible in the background) by snowmobile on the frozen Teno River.Photo: Essi Kohtanen

Nuorgam is located in the municipality of Utsjoki, where almost half the residents have registered Sámi as their first language. (The Sámi languages have official-language status in northern Finland; ThisisFINLAND has an article about them here.)

The town has a population of less than 200 and is situated on the southern bank of the Teno River. Norway lies on the northern shore, and the Arctic Ocean is only a few dozen kilometres away as the crow flies. A lot of Norwegians come to Nuorgam to do cross-border shopping, making Norway an important factor in the local economy. In light of Norway’s high prices, Finland is a nicely affordable country.

Kohtanen says that when she moved to Nuorgam, she had butterflies in her stomach.

“I remember driving up the road towards Nuorgam through the autumn landscape,” she says. “I felt really nervous. Everybody in the village knew that a young couple from the south would be arriving in town.” 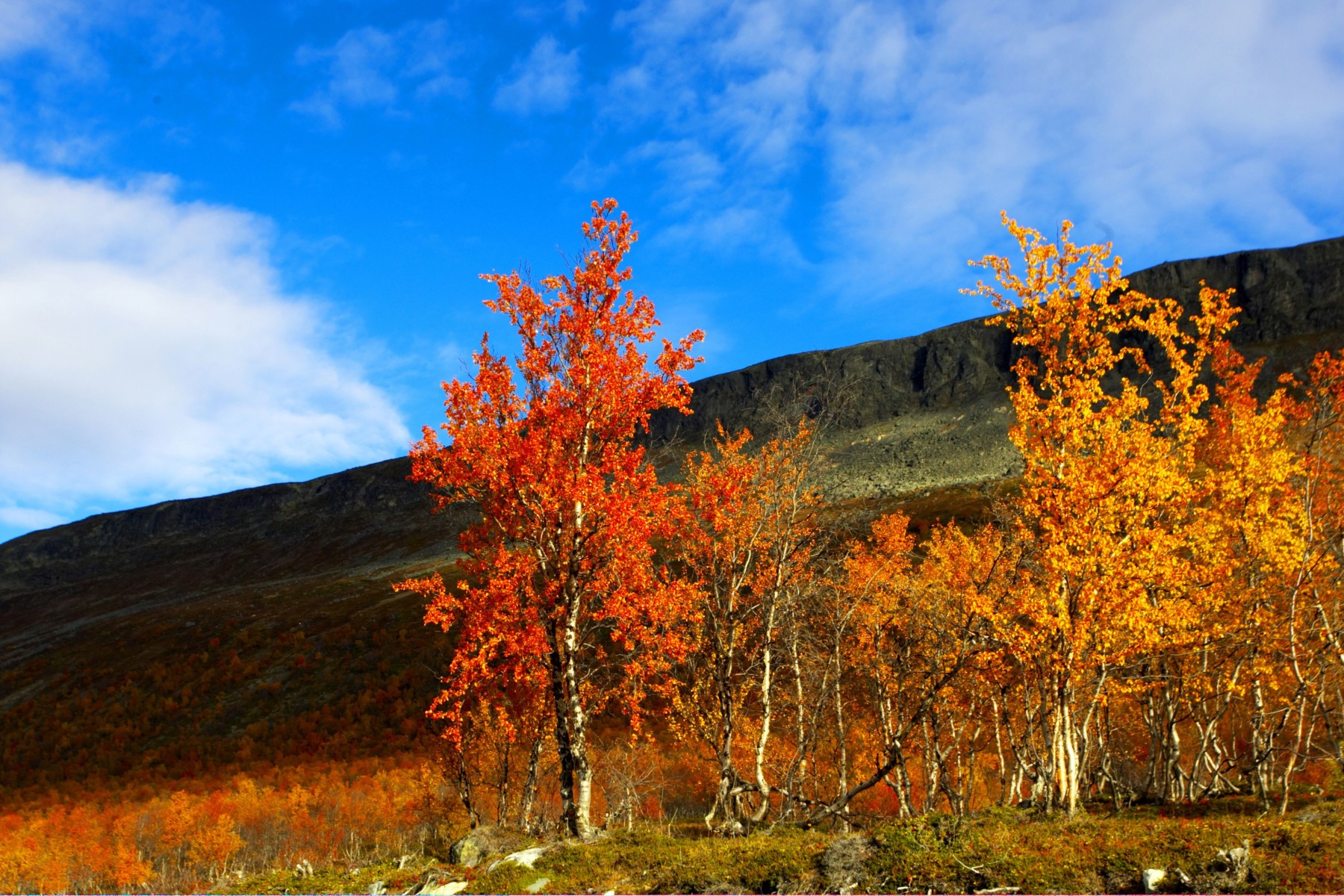 Northern Finland is famous partly for its brilliantly coloured autumn foliage (ruska in Finnish), as in this picture taken near Nuorgam.Photo: Tero Sivula/Lehtikuva

She soon found out that the locals welcomed her and her partner with open arms. People came over to have a chat and asked the newcomers to join in various events. They were even asked to lend a hand in the reindeer roundup, in which herders brand the calves and separate the animals destined for meat production.

“The fact that both of us have open, outgoing personalities helped,” says Kohtanen. “Whenever anybody asked us along, we said, ‘Of course!’”

According to Kohtanen, “tranquil” is the best description of life in Nuorgam. Needless haste is absent from people’s lives.

“When we went south for our summer holiday after our first year here, I noticed how busy people down there seemed,” she says. “I’ve undergone a transformation while living here. I’m more peaceful, and I sleep much better.”

Although her contract at the school is temporary and is drawing to a close at the time of this article’s publication, Kohtanen and her husband have decided to stay up north. 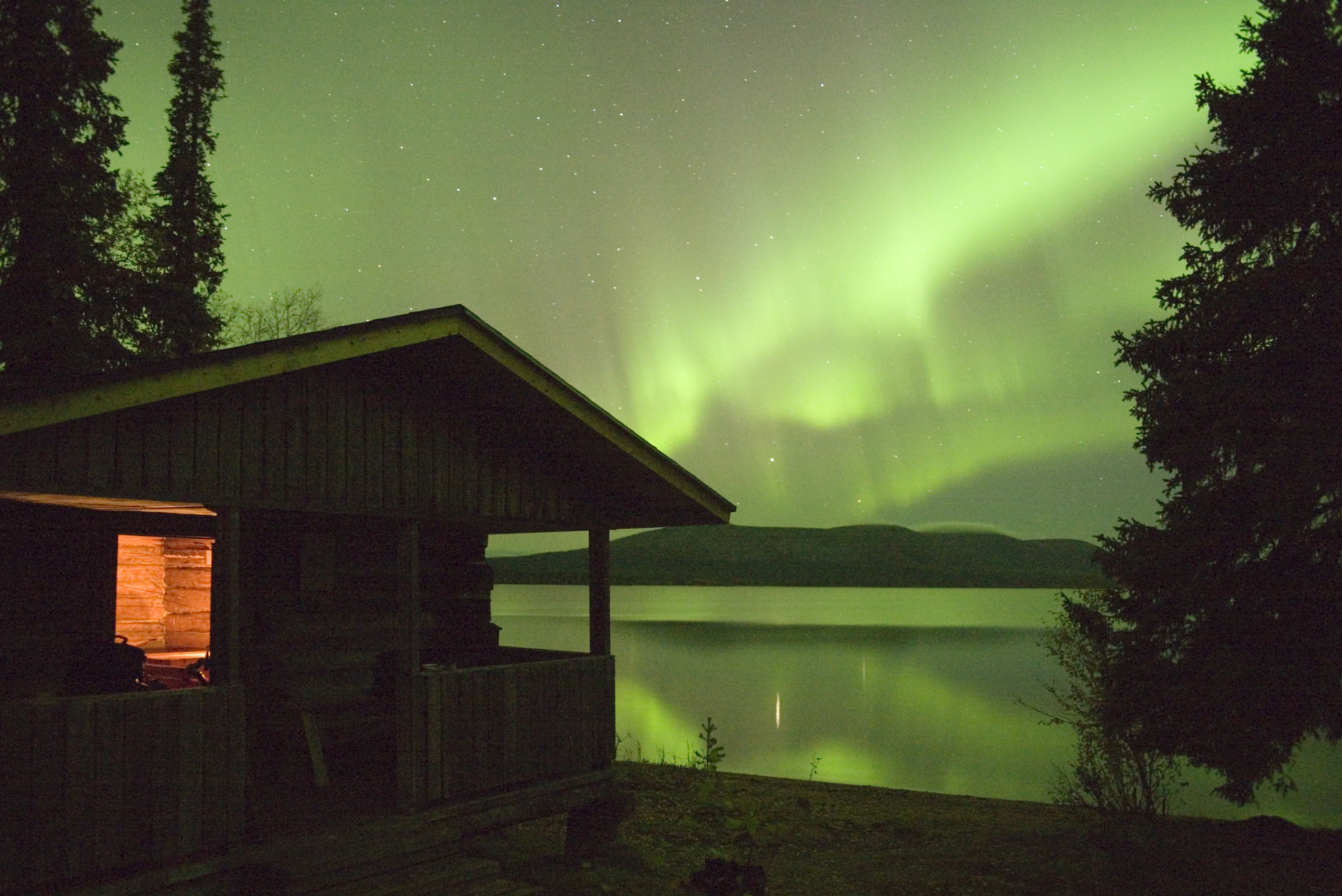 The most challenging thing for Kohtanen has been getting used to the long period of polar night, which lasts for almost two months in Nuorgam. During that time, the sun does not rise above the horizon at all. However, it’s not quite as dark as you might think. The white snow reflects what little light there is, and when the full moon is out, you can go skiing without a headlamp.

“If you just keep active and enjoy the outdoors, the polar night is not a real problem,” says Kohtanen. “We have lots of pure white snow, and you can see the Northern Lights practically every night.”

By the same token, you can enjoy the midnight sun in the summer. The period of nightless nights, when the sun doesn’t set at all, lasts from mid-May until late July.

All in all, life in Nuorgam is strongly defined by nature. If a severe snowstorm strikes, the roads may be closed all day and you won’t be able to get anywhere by car. 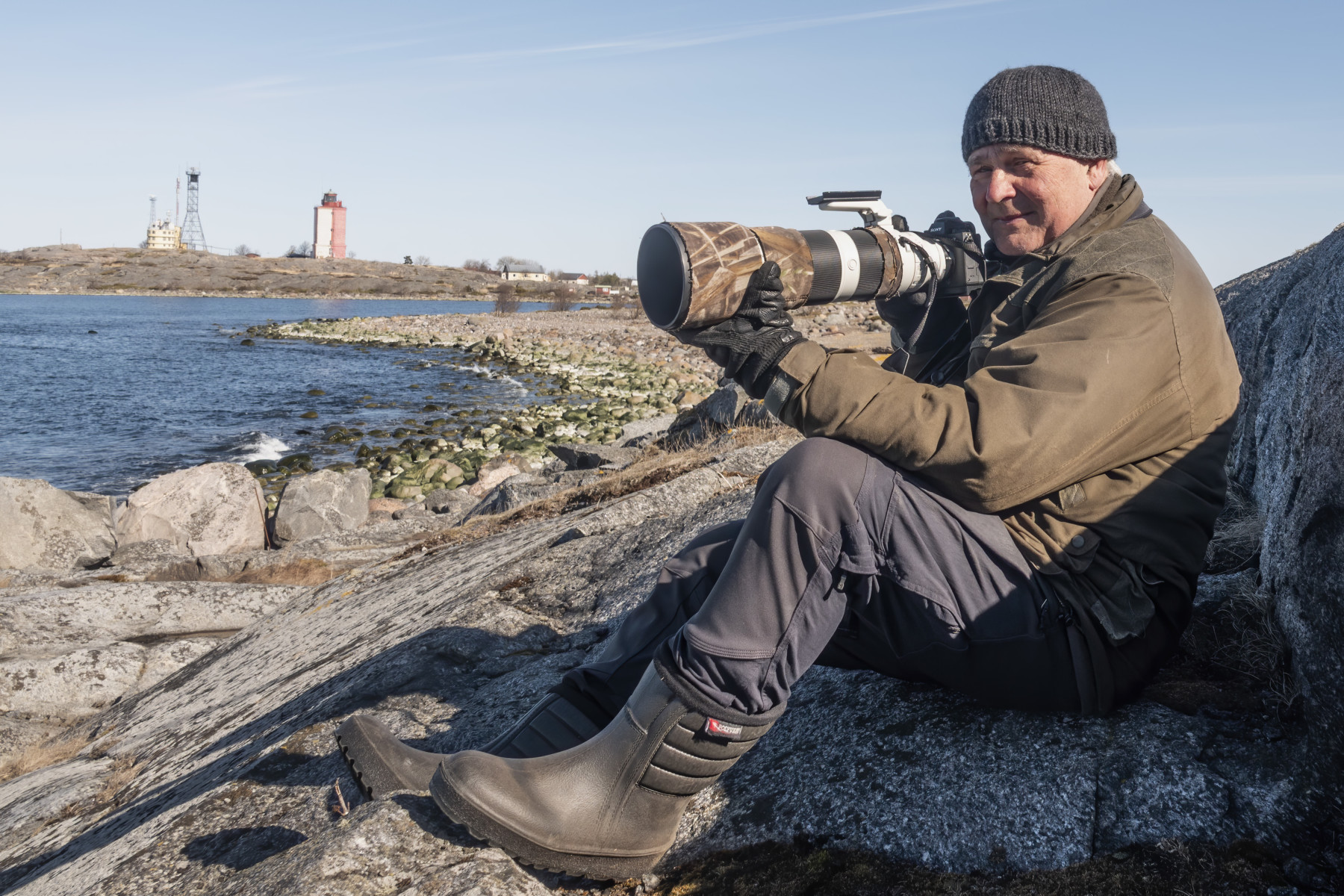 Jorma Tenovuo gets out early in the morning to go birdwatching with his binoculars and his camera.Photo courtesy of Jorma Tenovuo

Approximately 1,200 kilometres (745 miles) south of Nuorgam lies the island of Utö, Finland’s southernmost location with year-round inhabitants. Just like Nuorgam, Utö is a place where people are rarely in a hurry.

“We only have two important schedules here: the opening hours of the local shop, and the ferry timetable,” says Jorma Tenovuo, a retired professor of dentistry.

Tenovuo is one of roughly 40 people who live all year round on Utö. He moved there with his partner in 2006. But Tenovuo was already well versed in island life: his father was a zoology professor who researched the birds of Finland’s archipelago. The rest of the family joined him for these summer excursions to the outlying islands.

“It takes a certain attitude to enjoy a place like this,” says Tenovuo. “Utö measures less than one square kilometre, and in a tiny village everybody has to get along with everyone. You need to be social, but we do respect each other’s privacy, as well.” 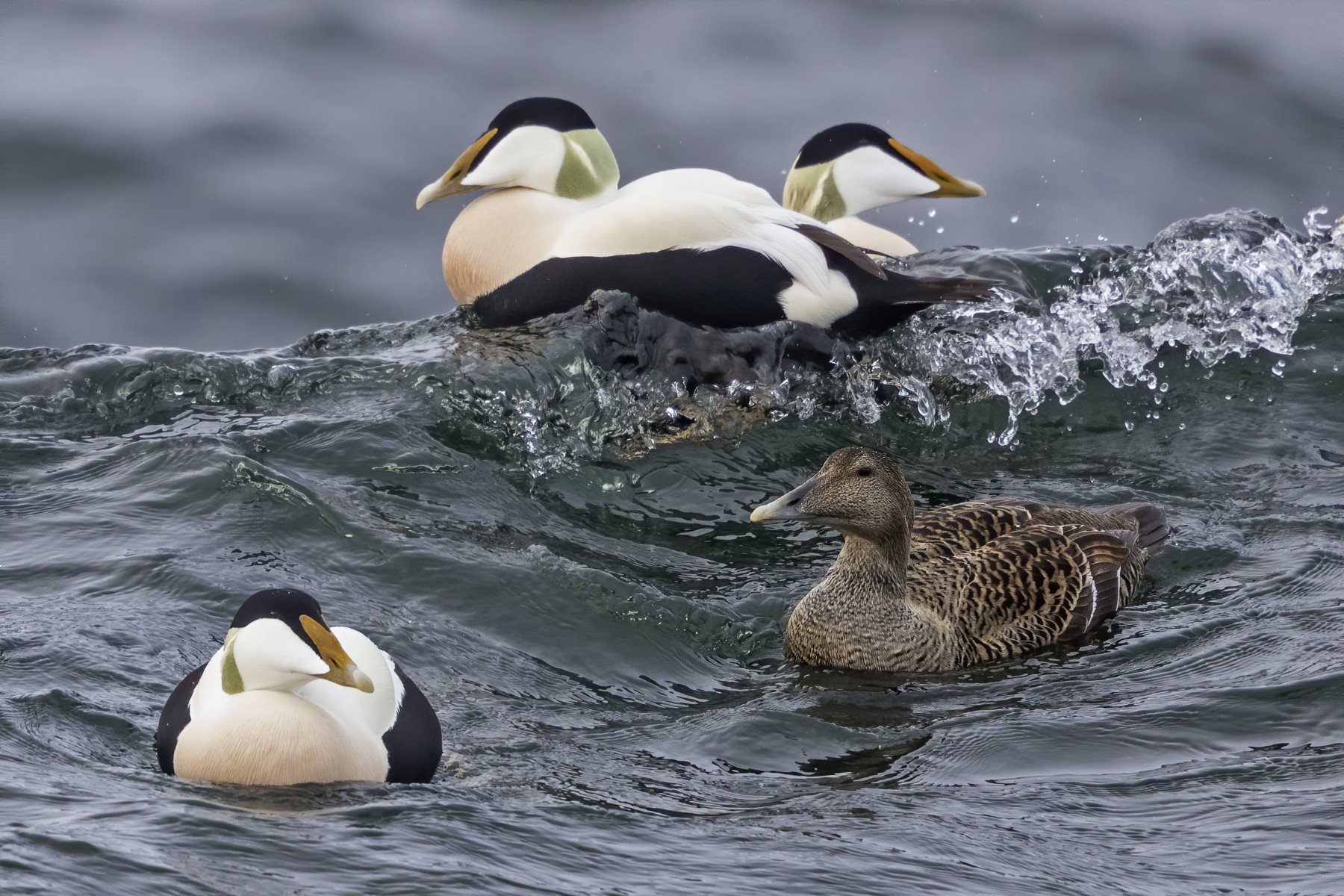 Utö is known as one of the best places in Finland for birdwatching. The common eider is one of many species you can find there (shown here are three males and one female).Photo: Jorma Tenovuo

“This isn’t the place for everyone,” he says. “If you move here, you need to be at peace with yourself, and you need to have something meaningful to keep yourself busy. Some people work remotely. You might have one person who is writing a book, another person who likes photography and someone else who spends their time fishing.”

Tenovuo has enough to do. Every morning around sunrise, he goes out with his binoculars and his camera. He is a passionate birdwatcher, and Utö is one of the best birding locations in Finland.

“A huge amount of birds migrate to continental Europe and Africa via Utö. We had a remarkable case in December 2012, when a fox sparrow appeared here. The bird is native to Northern America, and more than 800 birdwatchers from a number of different countries travelled here to observe it.”

Tenovuo and his spouse also have a “summer cottage” – a flat in the southwestern Finnish city of Turku, which they visit once or twice a month. A ferry connects Utö to the mainland; it’s free of charge and operates all year round, but it does take time. The boat takes four to five hours to make the trip from Utö to the port in Pärnäinen, and from there it’s another two hours by car to Turku. 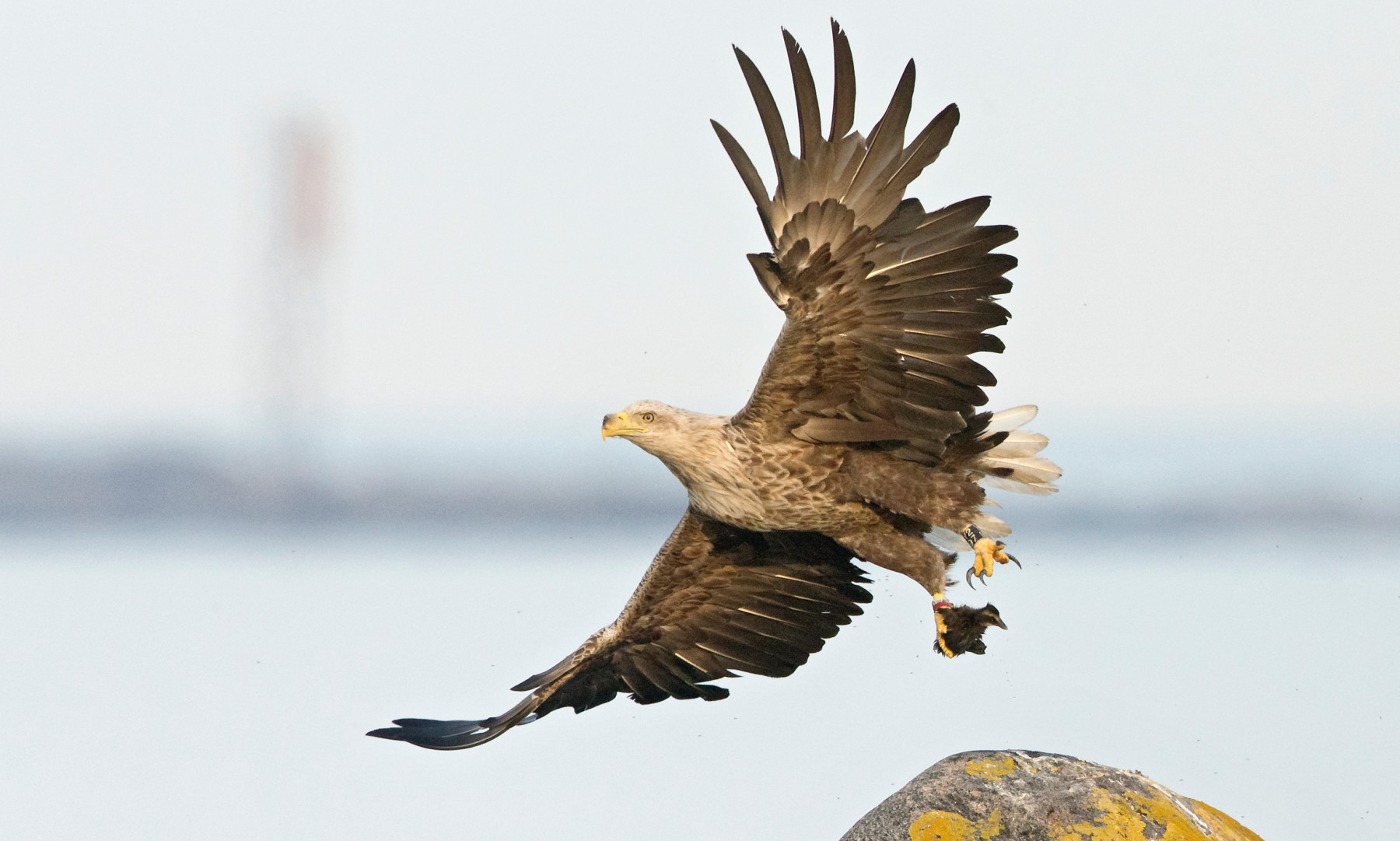 In the archipelago of southwestern Finland, where Utö is located, it’s possible to spot a white-tailed eagle, whose broad wingspan can reach as much as 2.45 metres (eight feet). This one has caught a duckling in its right claw.Photo: Jorma Tenovuo

Tenovuo is delighted by the excellent work that the local community has done to ensure that Utö remains lively and active. People are renovating old buildings, and great value is placed upon the traditional island culture.

“In many parts of Finland, remote rural areas are withering and losing population, but there are more people who would like to move to Utö than the island can hold,” he says.

Despite its remote location, Utö also attracts tourists, especially in the summer. The island even has a hotel, housed in a former military barracks. Tourism brings income to Utö, but as a nature lover, Tenovuo is also concerned about managing the island’s visitor capacity in relation to conserving nature and the environment.