Saija Saarela looks out over the ocean from the westernmost coast in Finnish territory.

If you start in Helsinki and drive almost 550 kilometres (340 miles) to the northeast, you’ll reach Virmajärvi, a lake in the municipality of Ilomantsi. The easternmost point in Finland, it is actually located 70 kilometres (43 miles) farther east than the Russian city of Saint Petersburg.

The border cuts right through the middle of the lake. No one lives on the shores of Virmajärvi, though. The easternmost inhabited place in Finland is the village of Möhkö, situated some 30 kilometres (18 miles) south of Virmajärvi, still just a couple kilometres from the Russian border.

Matti Laakso from Möhkö knows this region like the back of his hand. He has lived all his life in Ilomantsi, and the past 25 years in Möhkö.

The border with Russia has defined Laakso’s life. He retired from the Finnish Border Guard in late 2019 after 33 years of service. That’s not all: he’s a second-generation border guard, having followed his father into the profession. Laakso spent his childhood living at various border stations where his father was posted.

[Editor’s note: Be sure to check out our article about life in Finland’s northernmost and southernmost villages and about the country’s centre of population, too.]

Life on the borderline 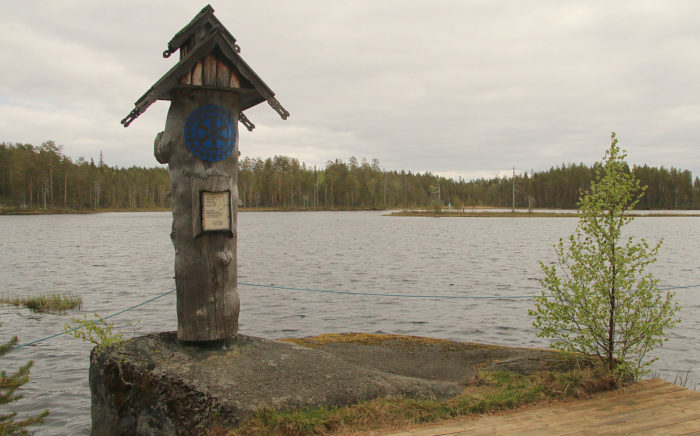 On the shore of Virmajärvi, a lake on the Finnish-Russian border, a post shows the easternmost point in Finland and the EU. (The actual border goes through the middle of the lake.) “May this be a sign of friendship, cooperation and peace,” reads the inscription. Photo: Jukka Vaittinen/Lehtikuva

“When I started, we would spend several days at a time patrolling along the border by foot or on skis, sleeping in huts along the way,” he says. “We had to carry our food with us, although we could also go fishing and gather mushrooms.”

Nowadays, the work is more similar to an ordinary office job. Border guards still go out on patrol, but they usually return home for the night. Electronic surveillance has become more significant.

The border between Finland and Russia is also an external border of the EU and the Schengen Area, so it is closely monitored. However, in the Northern Karelia region where Laakso lives, the border is rather uneventful. In 2019, all of five people were caught crossing the border without authorisation.

“We’ve had a pretty calm time here,” says Laakso. “There have been some cases where berry-pickers, seasonal workers from Thailand, have accidentally strayed into the border zone, and unfortunately there’s the occasional tourist who wants to take a border sign as a souvenir. But the Russian side of the border in these parts is pretty much wilderness, so there aren’t many people around over there.” 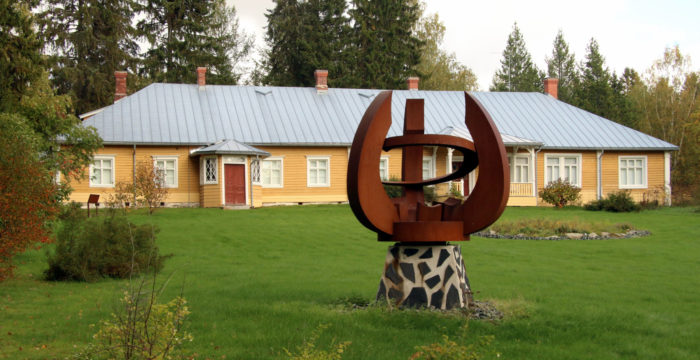 The buildings of the ironworks in Möhkö, near Finland’s border with Russia, still stand as a museum. Photo: Jukka Vaittinen/Lehtikuva

There have also been periods of greater turbulence. During the Second World War, Finland fought heavy battles against Soviet forces in the Ilomantsi region. There’s also a certain historical irony in the fact that the war is precisely the reason that Finland’s easternmost point is now situated here. As part of the peace treaty, Finland had to cede large areas of its Karelian territory to the Soviet Union, regions that lie east of the modern border.

Laakso says that life in Möhkö is very peaceful. Most of the people who live in the village are pensioners. Laakso’s children, like those of many families, moved to urban areas when they grew up.

“In the wintertime we have about 100 people living in Möhkö,” he says. “In the summer, the population doubles, when people come to spend time in their summer cottages. During the 25 years we’ve lived here, the local post office, grocery store and school have all closed down.”

Nonetheless, the village is still home to an ironworks museum, an arboretum, a couple of tourism entrepreneurs and a summer theatre. Laakso himself is also involved in theatre, not in Möhkö, but in another amateur group in Ilomantsi.

He has kept himself busy since he retired. Besides theatre, he sings in a choir. He also plays in a band that performs old-fashioned Finnish dance music called humppa in retirement homes. He remains an active outdoorsman, as befits a lifelong border guard.

Making a home in the west 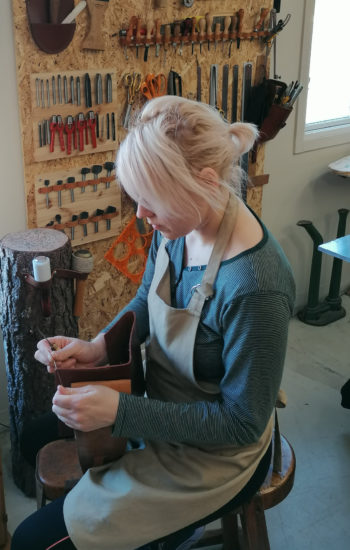 Saija Saarela, a leather upholsterer by trade, has a workshop in Eckerö, the westernmost municipality in the Åland Islands and in Finland. Photo courtesy of Saija Saarela

Approximately 400 kilometres (250 miles) west of Helsinki, the municipality of Eckerö, in Finland’s autonomous Åland Islands, is also situated adjacent to an international boundary. However, this border traverses the Baltic Sea, and Sweden lies on the opposite coast.

“If I go for a walk along the shore, all I can see is open water,” says Saija Saarela, “but the coast of Sweden is somewhere on the other side.”

Saarela was born in Kajaani, a town about 550 kilometres (340 miles) north of Helsinki, but her family moved to Åland when she was just three years old. Åland is an archipelago of 6,500 islands, most of them tiny and uninhabited, in the Baltic Sea between Sweden and the Finnish mainland. About 29,000 people live there. The population is Swedish speaking (Swedish is one of Finland’s official languages).

After finishing high school, Saarela went to Sweden to study, as many young Ålanders do. She spent roughly ten years there, but then she started feeling homesick. She began looking for a place in Åland, and in 2016 she settled in Eckerö. Her brother had already made his home there, as well. As a newcomer, Saarela attracted the curiosity of the locals. 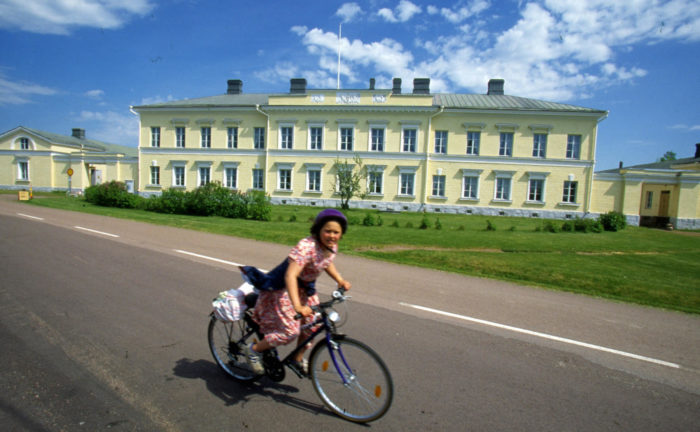 The old Post and Customs House in Eckerö dates back to 1828 and was built to be larger and more pompous than strictly necessary. At the time, it served to remind Sweden that the Russian empire reached all the way to its doorstep. Photo: Tor Wennström/Lehtikuva

“While living in Sweden, I could be more anonymous, but that’s not really possible here,” she says. “Especially since I moved my workshop to Storby [Eckerö’s municipal centre], it seems like everyone else knows everything about what I do, but I don’t know that much about them.”

Saarela is a leather upholsterer by trade. She makes most of her living doing upholstery for cars and boats, but she also fashions traditional handicrafts and artworks out of leather. She has taken part in several summer exhibitions in Eckerö.

The shows take place in Eckerö’s best-known attraction, the old Mail and Customs House. The fancy building looks slightly out of place. It was built in 1828, almost 20 years after Finland had become a grand duchy of the Russian empire. Among other purposes, the pompous, highly visible construction served as a reminder of the Russian empire’s border. It rubbed salt in the wounds of neighbouring Sweden, which had recently lost to Russia the territory that is now Finland, in the Finnish War of 1808–09.

Today, the Mail and Customs House greets many visitors who arrive in Åland from Sweden. Saarela says that some Swedish tourists are not even aware that Åland is a part of Finland.

That misconception might stem from the Åland Islands’ special status. After Finland gained independence in 1917, a dispute arose between Finland and Sweden over which country should own Åland. Many islanders wanted to join Sweden, citing strong cultural and linguistic connections.

Surrounded by water and nature 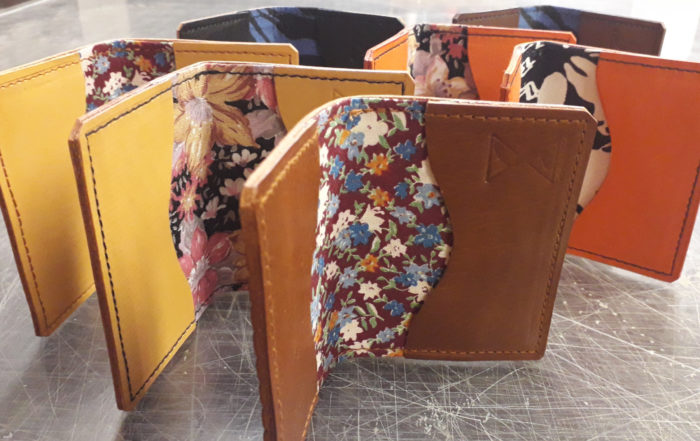 In addition to upholstering seats for cars and boats, Saija Saarela also makes wallets and other items and artworks out of leather. Photo courtesy of Saija Saarela

In the end, the League of Nations settled the dispute in Finland’s favour, but stipulated that Finland had to guarantee extensive autonomy to Åland.

Saarela says she enjoys living in Eckerö. The main reason she returned from Sweden is the different rhythm of life.

“Work culture in Sweden is rather stressful, but in Åland, people follow a different tempo,” she says. “Another good side is that everything is within easy reach here. I have nature and the sea surrounding me, and if I wish, it is easy to take a trip to Sweden. The harbour is five minutes from where I live, and the ferry to Sweden’s Grisslehamn only takes two hours.”