Photographic artist Nayab Ikram grew up in Åland and believes that the island setting is important to her creative process.

Åland consists of more than 6,500 named islands and islets, approximately 65 of them inhabited. Just over 29,000 people live there. More than one-third of them live in the regional capital, Mariehamn, while the smallest of the 16 Åland municipalities, Sottunga, only has about 90 inhabitants.

Being autonomous, the territory also has the right to enact its own laws and can decide over many key issues. International treaties specify that Åland forms a demilitarised, neutral zone, and it is often cited as an example of how an autonomous minority culture can thrive within a larger nation.

Important livelihoods nowadays include shipping, tourism, agriculture, banking and trade. We talk with five Ålanders to find out what archipelago life is like. 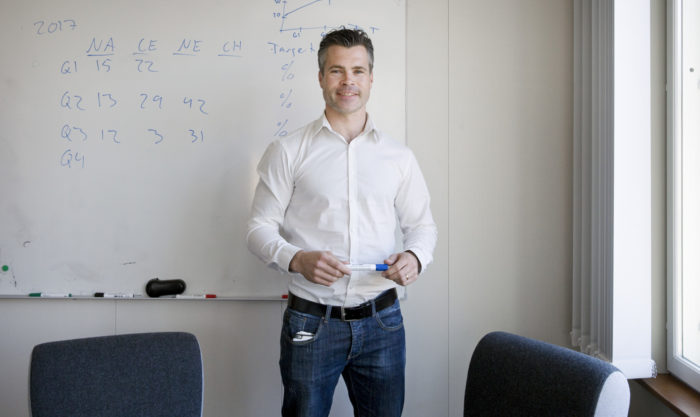 “I like to see the positive side of things,” says Anders Wiklund, who is known as one of the most positive people in Åland. “That’s a choice I make every day when I get up.”Photo: Maria Rosenlöf

In 2016 the Junior Chamber of Commerce in Mariehamn declared Anders Wiklund and his wife Camilla the most positive people in Åland, citing their work for underprivileged members of society.

They live with their four children, a dog and several cats in a country village north of Mariehamn – a peaceful place with ocean, forest, fields and meadows practically at its doorstep. Anders works as CEO of an Åland company that operates on the global marketplace.

“Things are on a small scale here but at the same time you can access the global world of work,” he says. “What more could anyone ask for?”

He enjoys having a stimulating job while also living in a safe place surrounded by beautiful nature and within easy reach of services. In addition to spending time outside hiking and fishing, Anders keeps in shape and runs a few races each year. On days off he likes to spend time at his cottage on Kökar, Åland’s most easterly municipality. There he can take a breather from everyday life and focus entirely on his family.

“I find it so empowering to see the difference you can make for other people just by helping out,” he says. “I like to see the positive side of things. That’s a choice I make every day when I get up.” 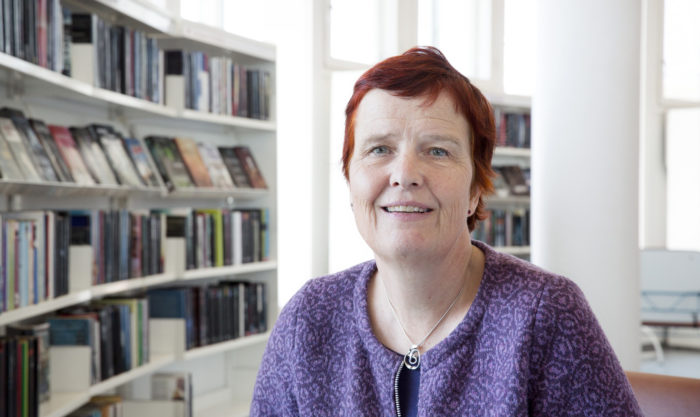 Mia Hanström moved to Åland from Sweden more than 30 years ago. She enjoys the proximity to nature and the changing seasons.Photo: Maria Rosenlöf

Mia Hanström, originally from Sweden, moved to mainland Åland – that’s what they call the biggest island in the archipelago – more than 30 years ago when she got a job there. Some years later she spotted an opportunity to move to Kumlinge, an island east of the mainland with just over 300 inhabitants. She lives close to nature and can experience the changing seasons, which she very much appreciates.

“That’s why I don’t mind putting up with all the trips back and forth from Kumlinge,” she says.

Mia is self-employed as a consultant in youth and equal opportunities work. She also manages an educational group and is active in various associations and governing boards. The journey between Kumlinge and Mariehamn takes two or three hours each way by car and ferry. Her solution is telecommuting, and it works well. She has an office at home in Kumlinge and an office space in Mariehamn, and she gets a lot of work done on the ferry.

“I’m very focused on making the most of the time I spend travelling,” she says.

At home on Kumlinge she has her family and a variety of animals – donkeys, horses, cats, chickens and even bees. “What I like best of all,” she says, “is to be with outdoors with my animals.” The family also hosts volunteers on the farm.

“This is quality of life – nature on your doorstep, and right by the water,” she says. “The sea atmosphere is good for your soul.” 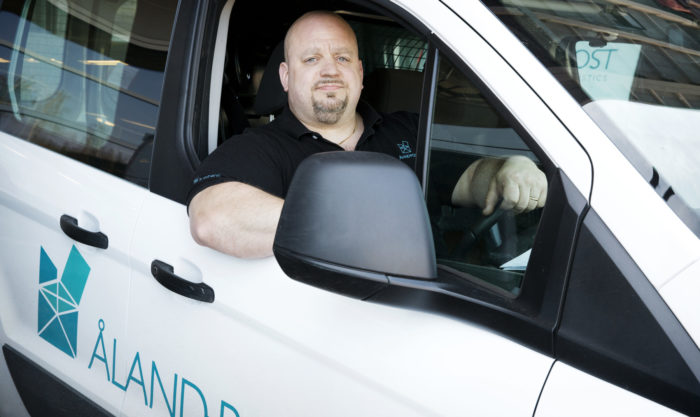 Kenneth “Kenta” Sandvik works as a postman, but is also a powerlifter with European and world records under his belt.Photo: Maria Rosenlöf

Kenneth “Kenta” Sandvik is a postman who also has numerous Finnish, European and world championship powerlifting titles under his belt, including European and world records. He lives with his wife and daughter in a recently built house in Jomala, just outside Mariehamn. He has always lived in Åland, whereas his wife, also a competitive powerlifter, moved there from Slovakia in 2005.

“Before our daughter came along we always trained together, but now we take turns,” says Sandvik. “We have our training routine three times a week.”

He believes that community is the most important thing in powerlifting.

“The social aspect of training and competing is at least as important as the sporting achievements,” he says. “Another advantage of powerlifting is that you get a very real and direct sense of how your training has progressed. What you lift depends on how well your training has gone.”

He says that sport forms an important part of Åland society and business life, and good financial assistance is available in the form of contributions and sponsors.

“Of course it’s a bit trickier to travel to competitions when you live on an island,” he says. “But living in Åland is cosy. Everything is nearby.” 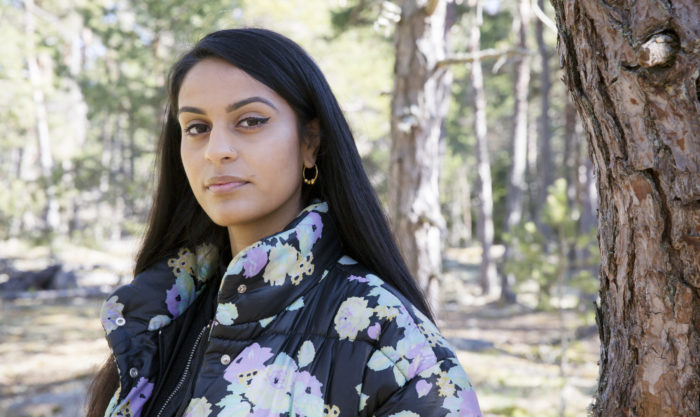 When artist Nayab Ikram comes home to Åland after a long trip abroad, that’s when she appreciates Åland the most.Photo: Maria Rosenlöf

Photographic artist Nayab Ikram is based in Åland, where she lives in Mariehamn with her parents and two budgerigars. She’s often out and about on foot.

Her older sister has moved away and lives in continental Europe, and Nayab has spent extended periods in Stockholm. When she comes home to Åland after long, often intensive periods away, that’s when she appreciates Åland the most. It’s a place where she can catch her breath. The sea air and the sight of the water are important to her.

“I walk along the water to clear my thoughts and get some peace,” she says. “Åland allows me to stop and catch up with myself. The good thing about Åland is that I can come here whenever I want. It’s my stopover. It’s important for my creative process.”

International Women’s Day (March 8), May Day (May 1) and Midsummer hold significance for her: “That’s when friends and family come together to celebrate, whereas at other times we’re in different places.”

Åland, and the small community that it is, have influenced Ikram, and this is reflected in her work as a photographic artist using various visual media to approach cultural identity and the formation of identity.

“Ålanders are so helpful,” she says. “People share knowledge and it’s easy to get help. That warms my heart. Åland has made me feel secure.”

Organic dairy on a farm with a family history 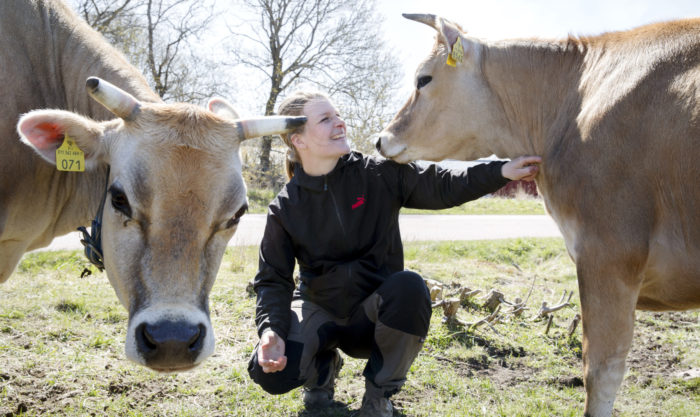 Jennifer Sundman raises cows on a farm that has been in her family’s ownership since 1815.Photo: Maria Rosenlöf

Jennifer Sundman lives with her husband and two children in Sund in northern Åland, on a farm that has been in her family’s ownership since 1815.

“Ever since I was a child, I always said that I would take over the farm and keep cows,” she says.

Like so many other Ålanders, she left Åland after high school to study. While studying to become a livestock agronomist in Uppsala, Sweden, she met her future husband, who is also from Åland. When she came across farm dairies towards the end of her studies, she knew at once that was what she wanted to do at home in Åland.

After graduation, the couple moved back to Åland, to Jennifer’s ancestral farm. They built a small dairy on the farm, and now the organic milk from their own cows goes into making cheeses, yoghurt, halloumi and ice cream. They also grow onions, potatoes, grain and fodder for the animals.

“The best thing about living here in Sund and in Åland is the nature,” she says.

“Spring is my favourite season. It’s so green, the days get longer and we can let the calves out. The time around Midsummer is magical, but I also like beautiful autumn days.

“I love living on this farm. It’s humbling to see the traces left by earlier generations.”