Finland ranks sixth among existing nations in total Winter Olympic medals, with 167 since the Games began in 1924.

A certain generation of Olympic fans all over the world remembers the glory of ski jumper Matti “The Flying Finn” Nykänen in the 1980s. Cross-country skiing is another sport in which Finland has had notable periods of success and is always a contender.

At the 2022 Winter Games, Team Finland is expected to do well in men’s and women’s ice hockey, not to mention snowboarding. [Editor’s note: The men’s hockey team won gold and the women’s hockey team won bronze. Finland also came home with half a dozen medals in cross-country skiing.] 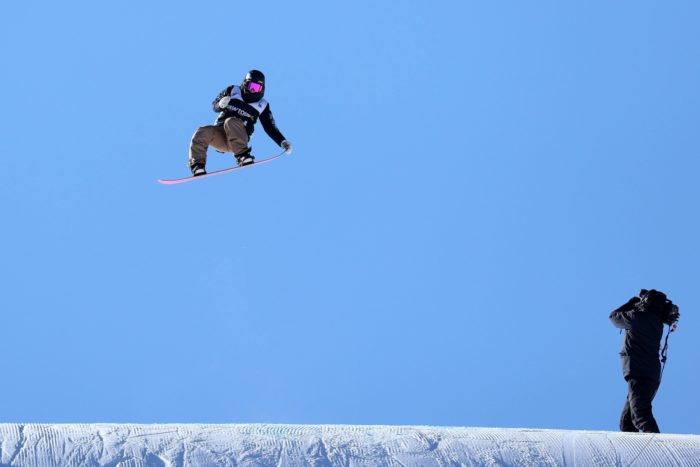 Team Finland expects to send about 90 Olympians to China, including 48 hockey players.

The National Hockey League’s recent decision to prevent its players from participating in the Olympic competition because of Covid-19 concerns could actually enhance the odds of the Finnish men’s team winning its first Olympic gold medal.

Although Finnish players have a strong presence in the NHL, the Lions won gold at the 2019 World Championship and silver in 2021, essentially without NHL players. 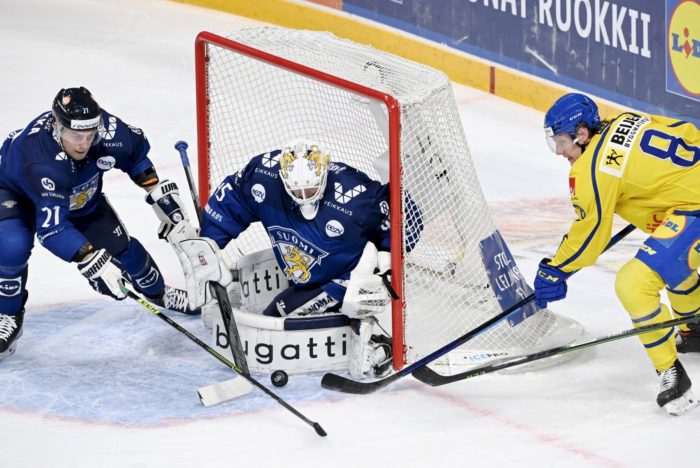 Jarkko Parikka (left) and goalie Juho Olkinuora of Finland fend off an attack from Sweden’s Fredrik Olofsson in a Euro Hockey Tour match in Helsinki in November 2021.Photo: Markku Ulander/Lehtikuva

Hockey coach Jukka Jalonen’s recent successes at the international level with an experienced roster that has remained intact bodes well for matches against teams that have depended on NHL talent.

“Finland has been able to produce those top achievements with basically no players from the NHL, even though the main opponents have had plenty of NHL participants,” says Mika Lehtimäki, director of the Finnish Olympic Committee’s Elite Sport Unit. “So, obviously the NHL’s decision could be of great benefit to Finland.”

Although it is a world power in men’s hockey, Finland failed to reach the medal stand in Pyeongchang in 2018 after winning silver in Turin in 2006, as well as bronze in Vancouver in 2010 and in Sochi in 2014. Finland is fourth overall among currently competing nations, with a total of two silvers and four bronze medals. 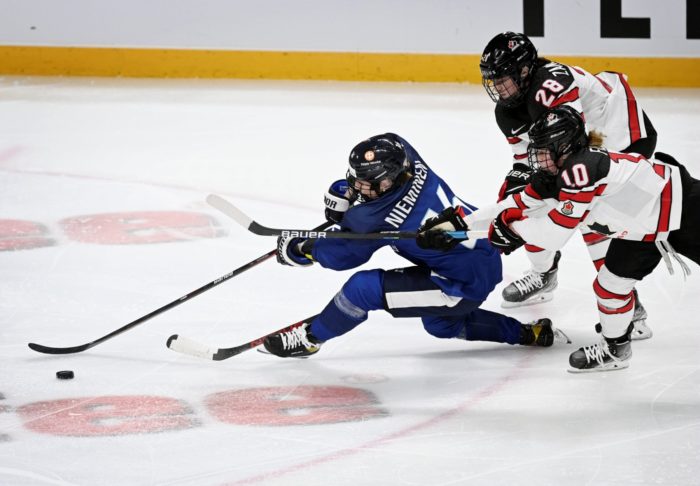 In women’s hockey, coach Pasi Mustonen’s team has been at the top of European play in recent years. However, it has yet to break the stranglehold that Canada (four golds and two silvers) and the US (two golds, three silvers and a bronze) have maintained since women’s hockey was introduced to the Olympics in 1998.

With three Olympic bronze medals, Finland is close to a breakthrough. It beat Canada in the 2019 World Championship semifinals in Espoo, located just west of Helsinki. Then it fell just short of a win against the US in a controversial final that saw a Finnish goal annulled in overtime, to the stunned disbelief of the home crowd; the game ended in a shootout.

That is actually reason for hope. “Finland has shown it’s possible,” says Lehtimäki, “so why not in Beijing?” 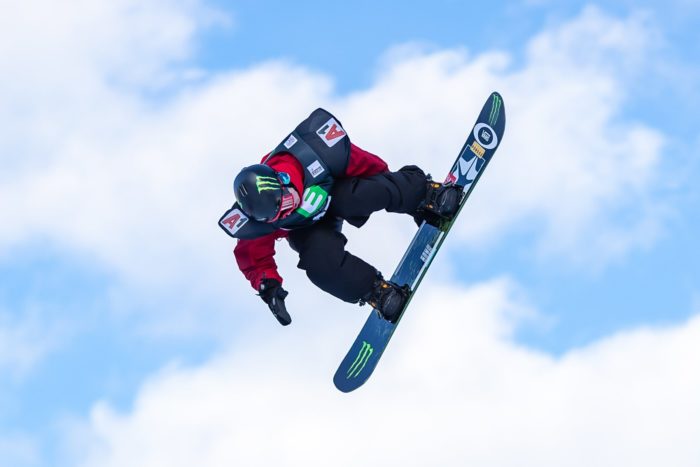 That feeling when you glance down and notice that down is now up: Finnish snowboarder Rene Rinnekangas in mid-jump at a competition in Austria in January 2021.Photo: Lukas Huter/AFP/Lehtikuva

With snowboarding medals in the last four Winter Games, Finland is again expected to do well in Beijing. Here are two athletes to look out for:

Enni Rukajärvi (born in 1990) of Kuusamo in northern Finland is one of the world’s top female snowboarders of the past decade. She won silver in slopestyle at the 2014 Winter Olympics and bronze in 2018. She also won gold at the 2011 World Championships and the 2011 Winter X Games in the same event, and in subsequent years added a silver and two bronzes at the latter competition.

Rene Rinnekangas (born in 1999) of Iisalmi in north-central Finland won bronze at the 2021 World Championship in slopestyle. He also took silver and bronze in the same event in 2019 and 2021 at the Winter X Games.

History of success in Paralympics 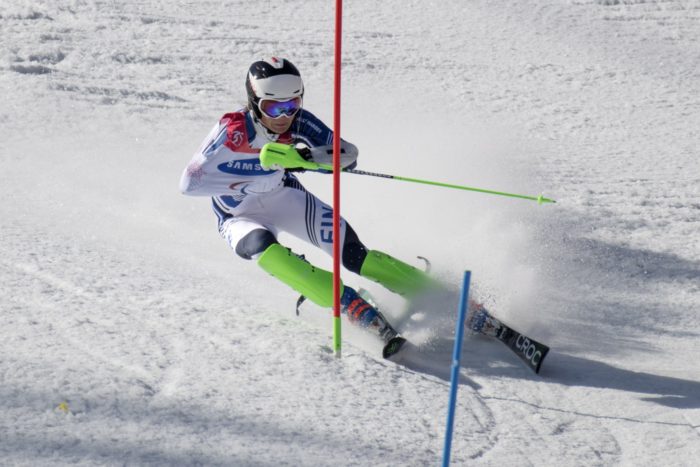 With an overall history of Paralympic success but just one gold medal since 2006, Finland is expected to send between six and eight athletes to Beijing to compete in three to four events.

“If we get three medals, as we did in Pyeongchang [in 2018], I think the team will have achieved our goal,” says Kimmo Mustonen, sports director at the Finnish Paralympic Committee.

Finland has competed in every Winter Paralympics since their inception in 1976 at Örnsköldsvik, Sweden. Its best showing was in 1984 at Innsbruck, Austria, where it finished second with 34 medals, including 19 gold. Finland has 188 total medals, sixth among participating nations. 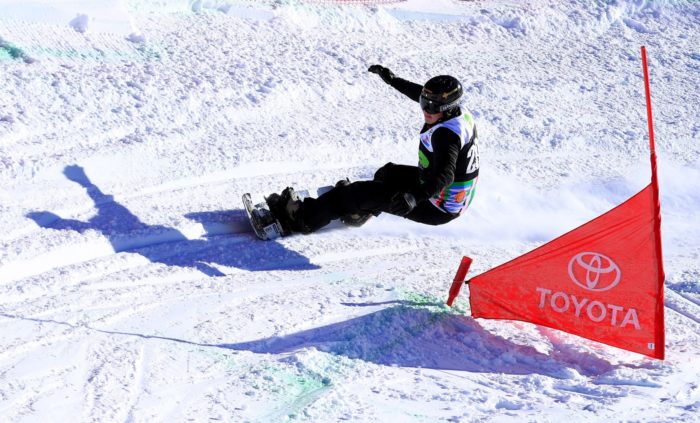 Snowboarder Matti Suur-Hamari rounds a curve; he competes in snowboard cross and banked slalom for Finland in the Paralympics.Photo: Tom Pennington/AFP/Lehtikuva

Mustonen says he expects Finland to medal in snowboarding and alpine skiing.

Matti Suur-Hamari (born in 1986), competing in snowboarding in the LL2 classification (limited coordination impairment), is Team Finland’s top hope for medals in snowboard cross and banked slalom. He received gold and bronze medals in those events, respectively, in 2018 in South Korea.

Finland’s best hope for Paralympic medals in alpine skiing is Santeri Kiiveri (born in 2000), who competes in the standing classification and whose best event is slalom. He is also expected to perform favourably in giant slalom and super combined. Inkki Inola (born in 1999), a young cross-country skier in the visually impaired classification, is also attracting attention.