The puck has stopped along two distinct analytical lines regarding the hierarchy of women’s ice hockey during its 29 years of major international tournament competition: There is the US and Canada, and then there is the rest of the world.

Since its inception in 1990, the Women’s World Championship tournament has been won ten times by the Canadians and eight times by the Americans, with Team USA taking seven of the last eight gold medals. In fact, no country other than Canada and the US has even won silver.

Meanwhile, the world’s most competitive women’s ice hockey team outside North America is Finland, which has progressed to the bronze-medal match every single time. With more bronzes (12) than any nation, and tied with Sweden for most fourth-place finishes (six), Finland is attempting to become the first non–North American winner when the 19th world championships are held in Espoo, just west of Helsinki, from April 4 to 14, 2019.

A chance to challenge 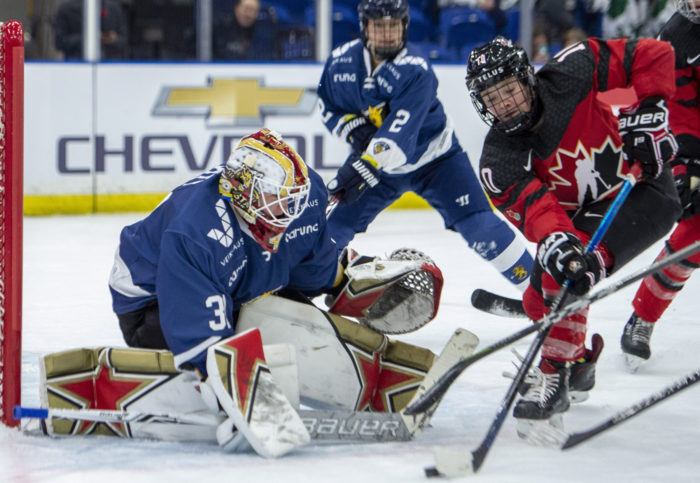 Noora Räty, Finland’s goaltender, is in position to stop a shot from Canada’s Sarah Fillier in the Four Nations Cup in November 2018.Photo: Liam Richards/PA Photos/Lehtikuva

“This year Finland has a good chance to challenge,” says Tuula Puputti, general manager of Team Finland and general secretary of the organising committee for the 2019 World Championship.

There are several reasons why Finland could become the first team to unseat the USA and Canada.

Finland will have home ice for the fourth time in tournament history; it was held in Tampere in 1992, in Espoo and Vantaa in 1999, and in Hämeenlinna in 2009. Finland is missing only one player from its bronze-medal performance in the 2018 Pyeongchang Winter Olympics.

“You think you know me,” begins the narrator, in a tone that makes it both a question and a statement. The video, entitled “This is who I am,” shows training and game clips of some of the World Championship players.
Video: International Ice Hockey Federation

And not to be underestimated is the fact that the Finnish government now financially supports its top-level female hockey players.

After the 2018 Olympics, 22 Team Finland players each received a 10,000-euro grant from the Ministry of Education and Culture, allowing them to cover some of their living expenses while devoting most of their time to training. For the majority of the squad, it was the first time receiving such a grant, and 10,000 euros doubled the amount given the previous year, when eight players received 5,000 euros each.

Puputti, a former Olympic and national team goaltender for Finland, says this is “the best situation we’ve ever had” to prepare for the World Championship. 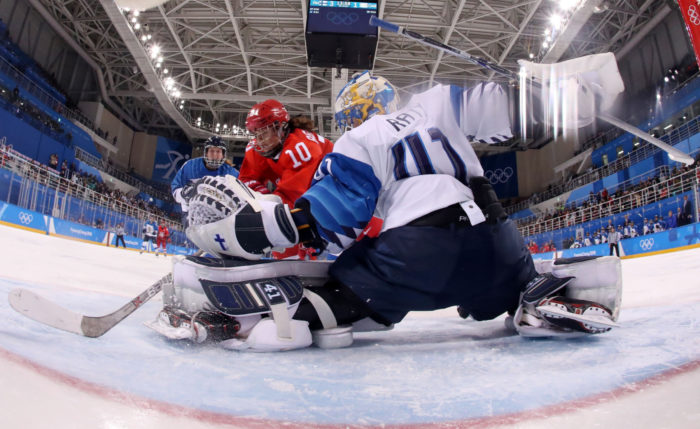 Goal’s-eye view: A camera at the back of the net shows Finnish goalie Noora Räty with a glove and a leg out as Russia’s Lyudmila Belyakova (10) approaches during Pyeongchang Olympic action in February 2018.Photo: AFP/Lehtikuva

Equitable financial support has always been a point of contention in women’s hockey. Team USA threatened to boycott the 2017 World Championship in Plymouth, Michigan, until it received treatment equal to that of its male counterparts.

Whereas many male national players earn substantial sums of money as professionals in the National Hockey League and other high-profile leagues, women’s professional hockey leagues are scarce and do not pay well. Traditionally, female national-team hockey players have been left to choose between consistent training and work.

While American and Canadian female hockey players have better access to professional leagues in North American, some members of Team Finland’s lineup have also closed the financial gap by competing in the Swedish Women’s Hockey League, the highest level of competition for women in the Nordics. Puputti says the Swedish league remains just semiprofessional, but it gives Finnish women better financial and competitive footing to prepare for the national team. 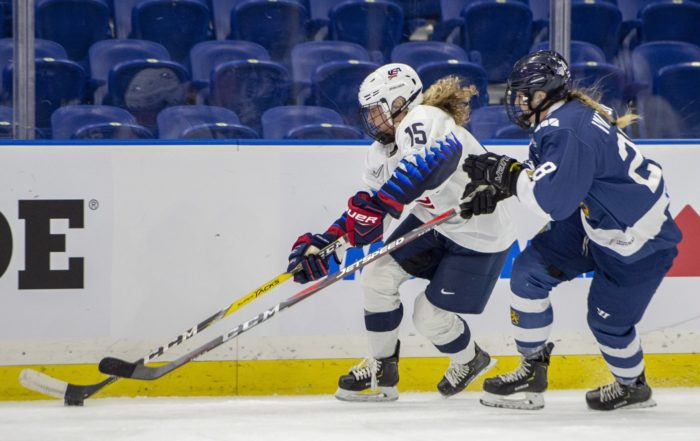 “If everyone stays healthy and all goes well, we’ll maybe have our best team ever,” said Puputti, who played collegiately at the University of Minnesota Duluth.

With better financial support worldwide, women’s hockey is expanding its footprint. The field for the 2019 World Championship now has ten qualifying teams instead of eight, coinciding with the ten-team field that will be invited to the 2022 Beijing Winter Olympics.

Women’s hockey became an Olympic sport in 1998. As in the World Championship, Finland has never won Olympic gold, but it took bronze in 1998 in Nagano, in 2010 in Vancouver and in 2018 in Pyeongchang.

For the World Championship tournament in Finland, Group A consists of the top-five-seeded teams: USA, Canada, Finland, Russia and Switzerland. Group B includes Sweden, Japan, Germany, Czech Republic and France. Following round-robin play, all Group A teams and the top three Group B teams advance to the quarterfinals.

Fans who pack into the 6,982-seat Metro Arena will see only one difference in rules between men’s and women’s hockey: Body checking is not allowed. The debate continues about whether to change this rule in order to promote equality, but women’s hockey remains a contact-filled, fast-paced sport – that’s the nature of ice hockey.