“FIN 3 – CAN 1” read the text on the TV broadcast from Bratislava, Slovakia, where Finland triumphed over Canada in the gold-medal match.

In Helsinki, a proud train driver with a sense of humour programmed the vehicle’s destination screen to show the same text, the game’s final score.

The Finnish highlights of the tournament were numerous. Kevin Lankinen, 24 years old, came seemingly out of nowhere to act as Finland’s main goalie in Slovakia. He had just finished his first season in North America, where he played 19 games for the Rockford IceHogs, the farm team of the NHL’s Chicago Blackhawks.

Kaapo Kakko, 18, introduced himself to the world by scoring six times in his first world championship tournament. And Finnish captain Marko Anttila, 34, turned up the volume with goals in the quarterfinal against Sweden, the semifinal against Russia and the final against Canada. What about Anttila’s nickname, Mörkö, which even non-Finnish fans may have noticed by now? That may take some explaining. 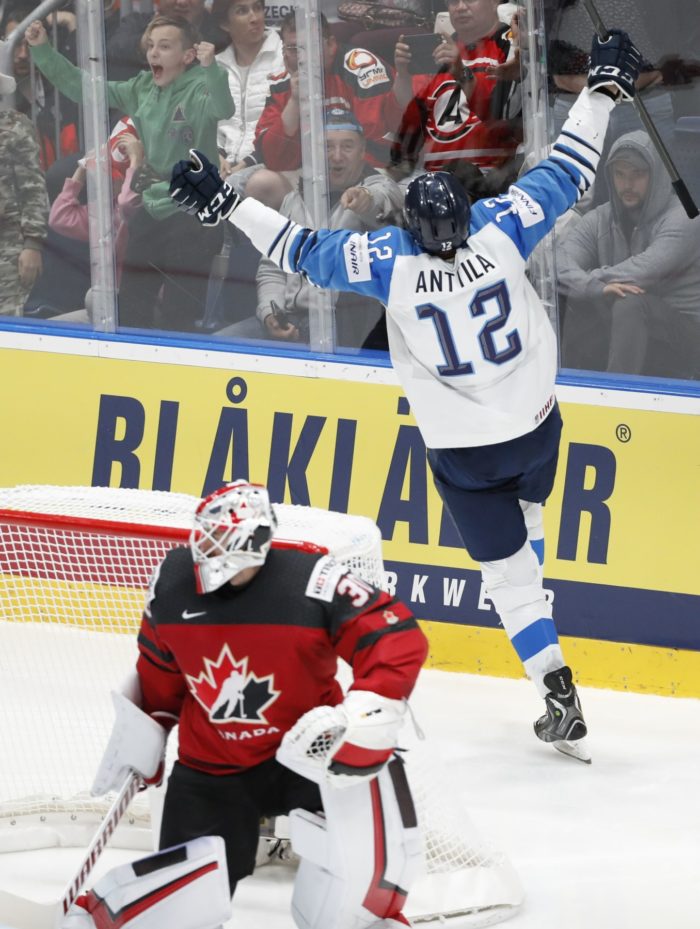 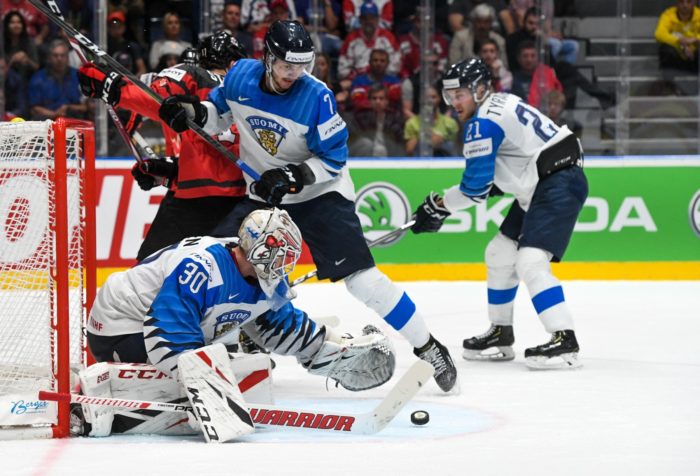 Goaltender Kevin Lankinen (30) guards the net as defender Oliwer Kaski (7) clears a Canadian player out of the area and Juhani Tyrväinen (21) comes back to help. Photo: Grigory Sysoev/Sputnik/Lehtikuva 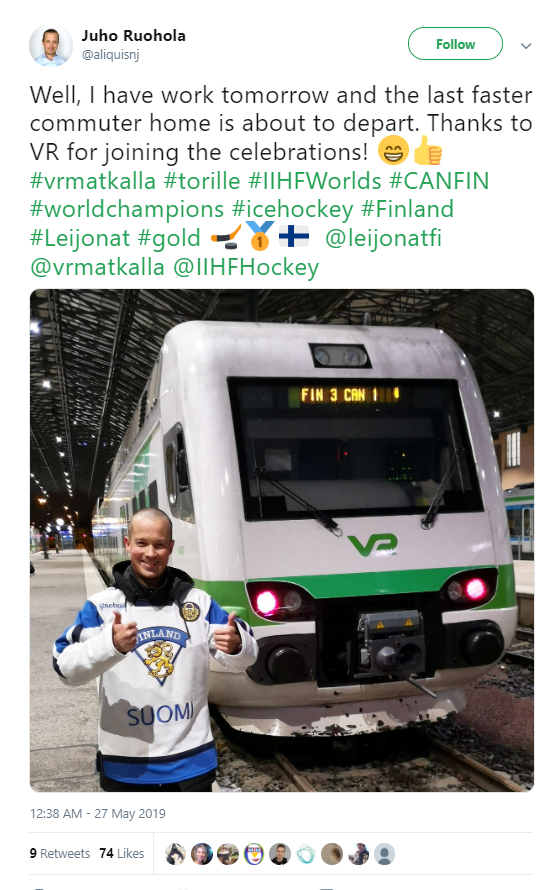 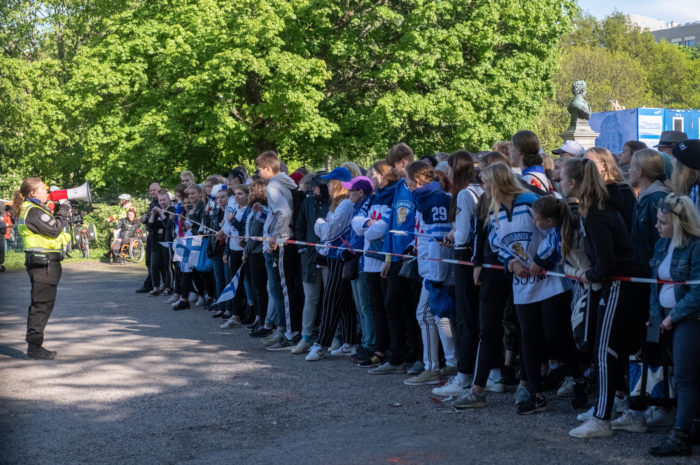 Hockey fans wait to be allowed into the grounds of Helsinki’s Kaisaniemi Park before the big party in honour of the championship team. Photo: Tim Bird 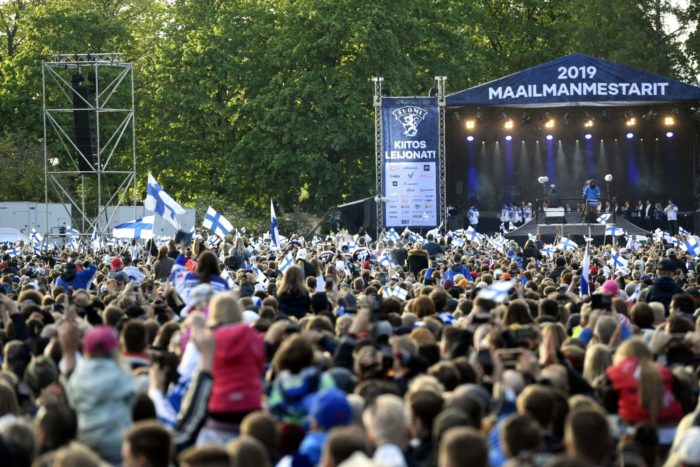 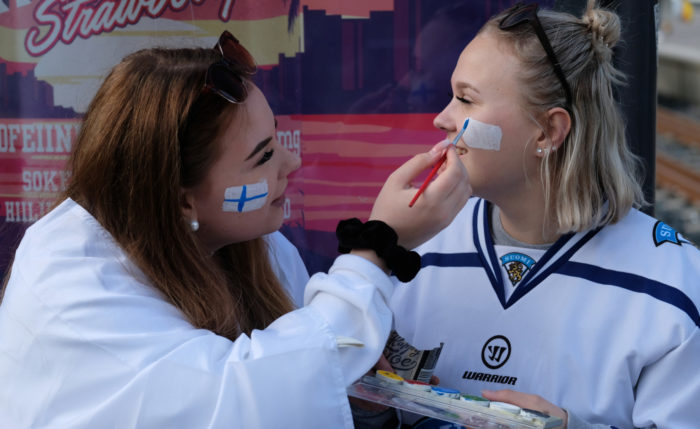 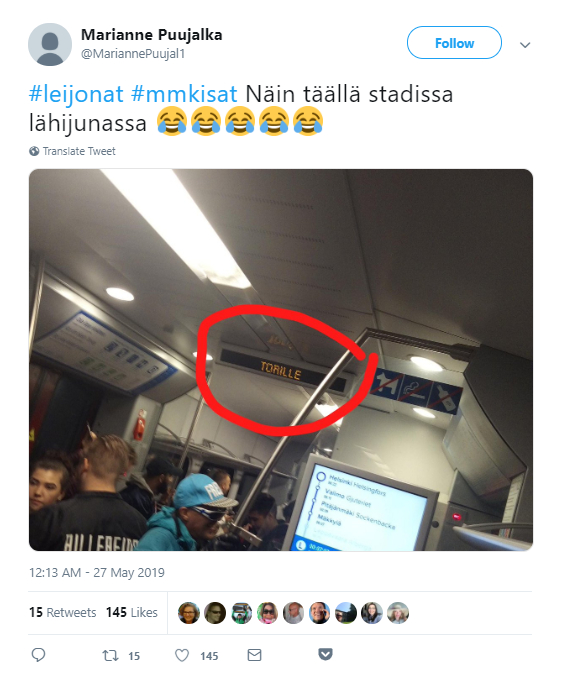 Aboard a Helsinki-bound commuter train, the screen reads, “Torille” (“To the town square”), which actually means “Everybody get out into the streets, because we’re going to have a party!” Original tweet here: https://twitter.com/MariannePuujal1/status/1132756744512450562 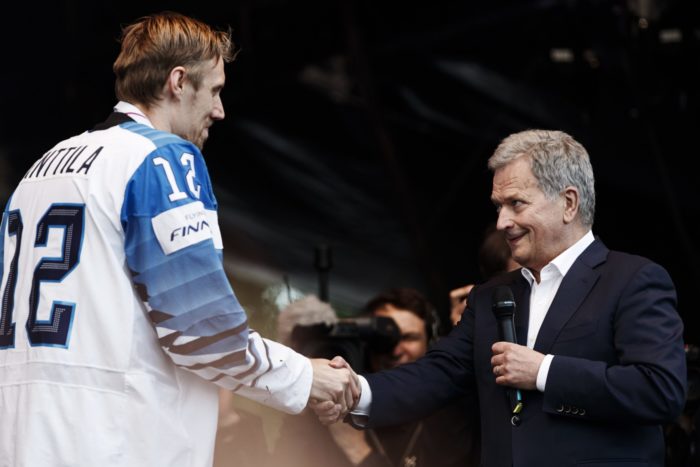 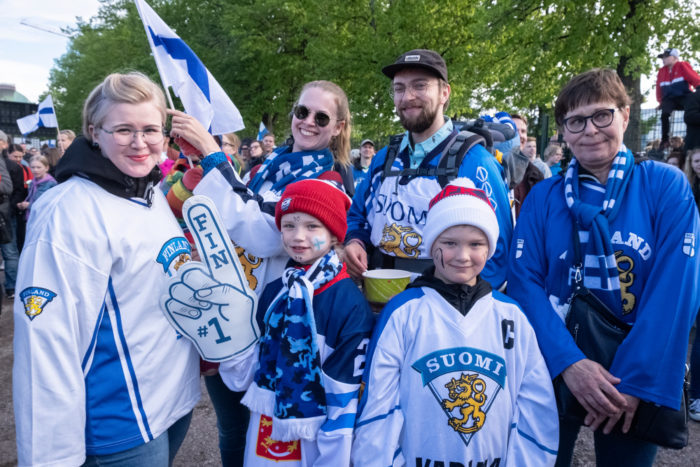 A day to remember: The Joensuu family and the Heikkonen family were among the 50,000 people who showed up to join the fun. Photo: Tim Bird 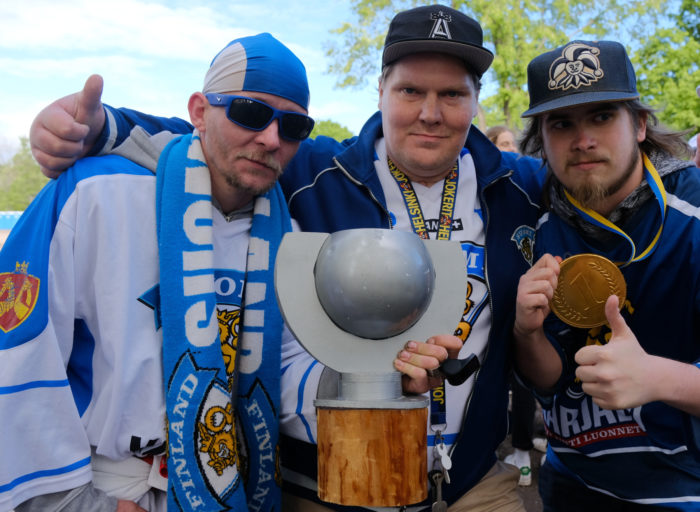 These guys have shown their talent by constructing replicas of the world championship trophy and gold medal. Photo: Tim Bird 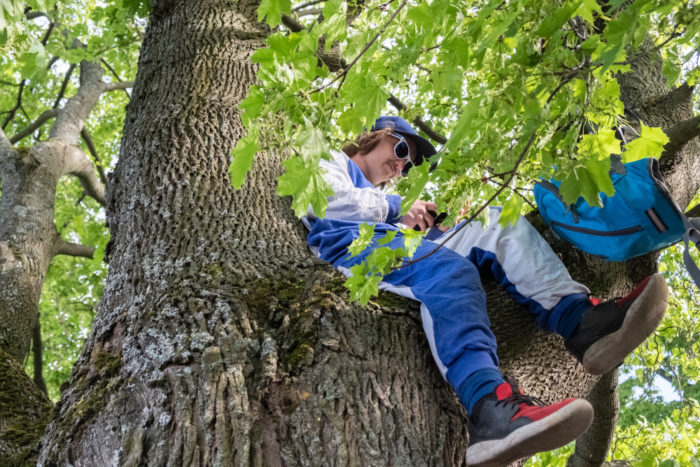 People went to great lengths – and great heights – to get a glimpse of their hockey heroes in Helsinki’s Kaisaniemi Park. Photo: Tim Bird 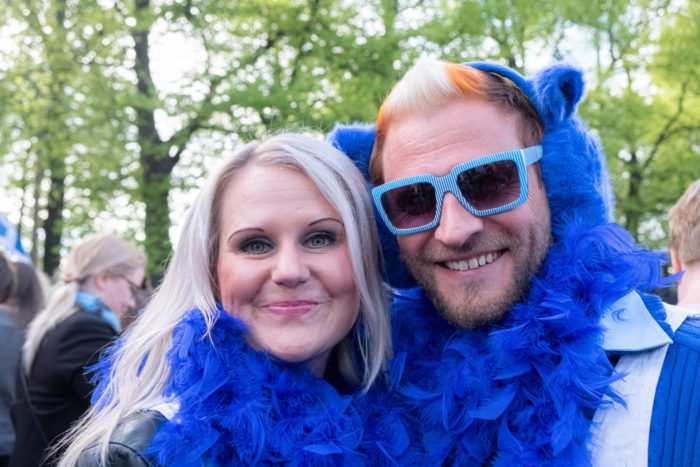 Tangled up in blue: All manner of blue-and-white costumes and accessories were on display. Photo: Tim Bird 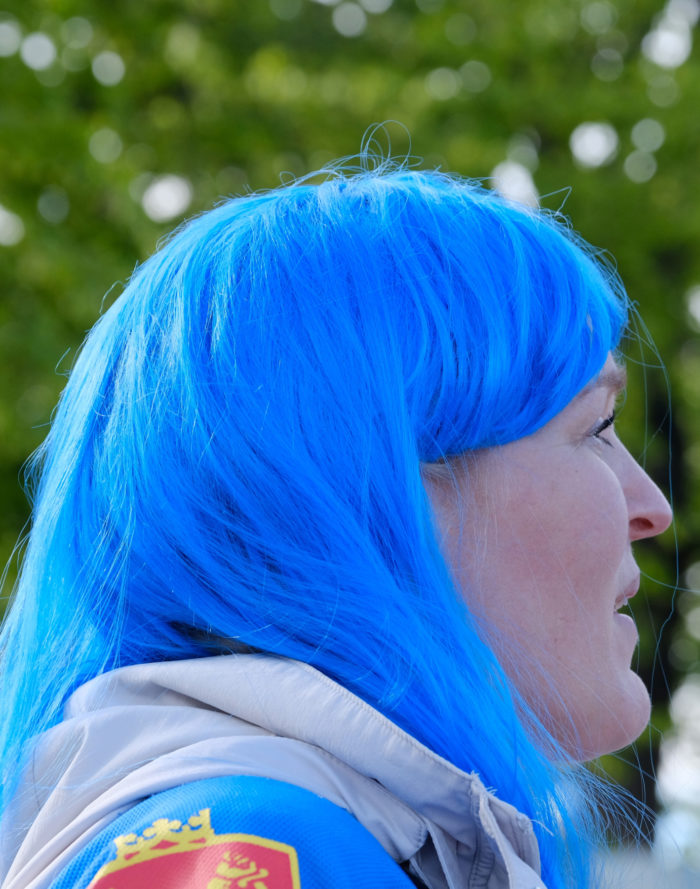 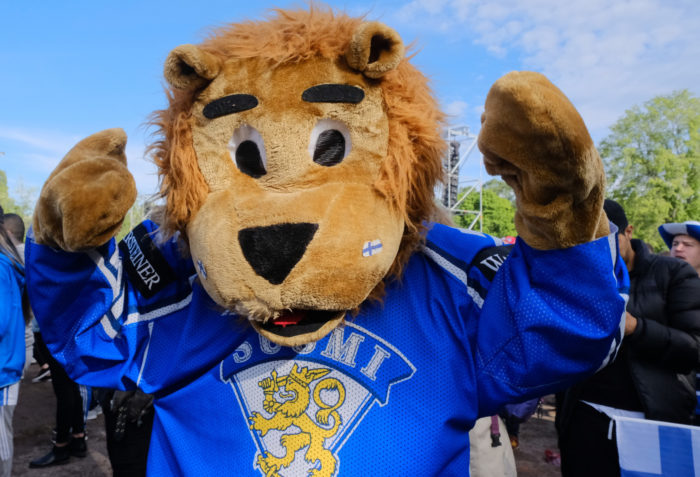 “Roar! You see the lion on the hockey jersey? That’s me!” Photo: Tim Bird 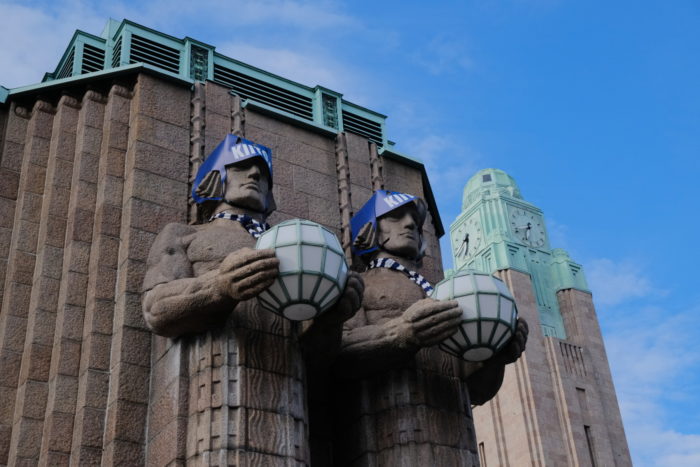 The statues in front of the Central Railway Station got into the spirit of the celebration with blue-and-white scarves and helmets that read “Kiitos!” (“Thank you!”) Photo: Tim Bird 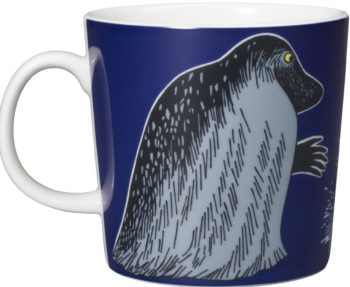 The Finnish hockey captain’s nickname plays on his first name, Marko, but mörkö means “monster.” Not only that, but it’s associated with one particular monster, from the series of books and cartoons about the Moomintrolls, created by Swedish-speaking Finnish writer and artist Tove Jansson (1914–2001).

In the stories, the ghost-like Groke, as the English translation calls the monster, inspires fear in the other characters and freezes the ground around her as she goes. So the comparison is not inappropriate for an ice hockey player, although the deeper meaning may have been lost on the Canadians. 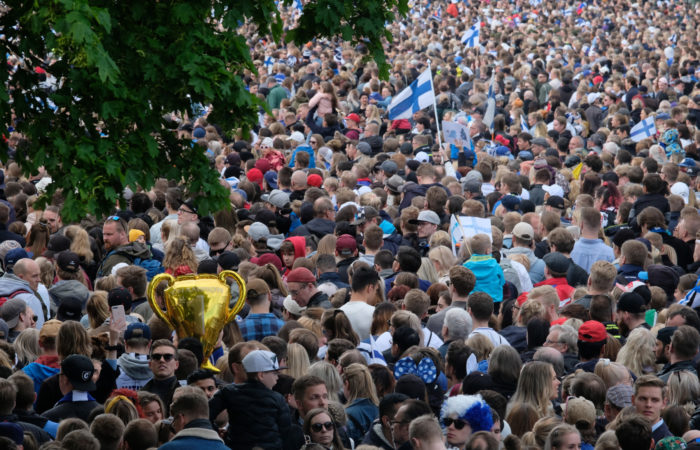 Helsinki’s Kaisaniemi Park sets the scene for a celebratory sea of fans and flags and – a trophy-shaped balloon?Photo: Tim Bird

On one Helsinki commuter train, the staff changed the destination screen to read “Torille.” This means “to the town square,” and refers to the saying Torilla tavataan, “We’ll meet on the town square,” which is really a short way of saying, “Everybody get out into the streets, because we’re going to have a party!”

Finland won the World Championship in 2011, beating Sweden 6–1, also in Bratislava, and in 1995, defeating Sweden 4–1 on its home ice in Stockholm. The previous celebrations took place on Helsinki’s Market Square, but in 2019, as the team was in the air on its way home, the news came through that this time the party would be held in Kaisaniemi Park, next to Helsinki Central Railway Station.

On a stage at one end of the park, President Sauli Niinstö congratulated the team, hoisting the trophy in the air and shaking hands with the players. Pop singer Paula Vesala and other stars performed; Vesala sang “Finlandia,” which never fails to move the audience (composed by Jean Sibelius in 1899, with lyrics written by Veikko Antero Koskenniemi in 1941).

The day before, the Finnish capital had experienced a rainstorm that lasted all afternoon and into the evening. Now, as an estimated 50,000 people converged on Kaisaniemi, most of them dressed in blue and white, the sun was shining.