Kayleigh Karinen has won the world championship not once but twice. Considering she’s American and cheerleading originated there, you would expect her to have won her gold medals under the US flag. But no. She competed in the US for most of her career, but won the ultimate title as a member of the Finnish national team.

“I am very proud of my Finnish roots,” says Karinen, 24 at the time of writing, “and very fortunate to be able to compete and win as a Finn.”

Her great-great-grandparents migrated from Finland to America in 1902 in search of a better, more prosperous life. Others in the family had already moved there in the 1880s and 1890s. About 400,000 Finns moved to America around the turn of the 20th century to escape poverty and political unrest surrounding the time of Finnish independence, which was achieved in 1917.

The amount of direct contact between Karinen’s family and Finland had slowly dwindled. She decided to renew the connection by living here for a while.

“I had spent time at a grandparent’s summer cottage in Michigan, so wooden houses, lakes and nature were not entirely unfamiliar,” she says.

Now she has met relatives in Vaasa, on Finland’s west coast, and visited her great-great-grandparents’ former house in nearby Jalasjärvi.

“My father and brother had never been to Finland, either,” she says. “They came to visit me here and we went to Jalasjärvi and Vaasa together. It was a very meaningful experience.”

Sisu in her heart

Kayleigh came to Finland for a five-month exchange programme in January 2017. She had already lived, studied and cheered in Chile and Spain.

“I had never been to Finland, but I’d dreamt about it,” she says. “Roots and relatives are a big thing in my family.”

At first, almost the only word she knew in Finnish was sisu, meaning guts and perseverance. Now she speaks almost fluent Finnish, and sisu is her spirit word – it is even tattooed on her finger.

“Sisu is how things are done here – being feisty and determined and pushing through difficulties,” she says. “I feel that I have gotten this far with the help of it. Now knowledge of the word has spread to other countries.”

She extended her exchange programme to a full year and then applied for a master’s programme at Helsinki University. She has been studying for a degree in Linguistic Diversity and Digital Humanities, with graduation slated for November 2021. 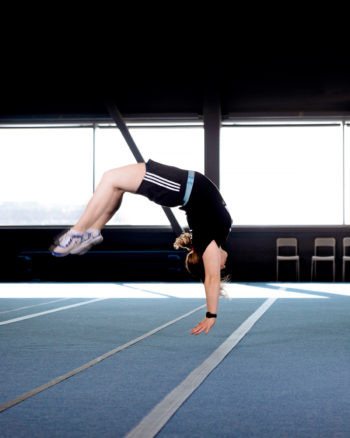 Planning to stay in Finland

“I want to stay in Finland for good,” says Karinen. “I admire that everything here is open and progressive. It gives me the opportunity to flourish, not in just cheerleading, but in everything I want to do.”

She is head coach and coordinator for Funky Team, one of the biggest cheerleading clubs in Finland. She also teaches tumbling at a gym in Helsinki. A tumbler does standing and running floor acrobatics, such as back tucks and flips with twists. The national team is still a big part of her life.

“The team, the cheerleading environment and the families I have met have been a huge help,” she says. “And without cheerleading I wouldn’t have been able to stay here or travel the world the way I have.”

Finland is well known in the world of cheerleading. The US held the top title until 2018, when Finland won the World Championship. Finland won again in 2019. In 2020 the championship was cancelled because of Covid-19.

Karinen knows one main reason why Finland reached the top.

“The motto for the national team is to train smarter, not harder,” she says. “That means that we have enough rest days and get enough sleep and of course eat wisely. Here they understand the importance of rest days at every level of cheerleading. In some other countries, sports can easily become overwhelming, with too many practices and competitions.

“Practicing smarter and safer means that athletes can have a longer career. You warm up and cool down well at every practice, and maintain overall balance in your life. You don’t get as many injuries and you don’t burn out.”

The national team practices together just seven weekends a year. In addition, stunt groups – smaller parts of the team – practice individually in their hometowns two or three times a week.

Winning the World Championship had been a dream for Finnish cheerleading for a very long time. Karinen feels fortunate to have helped make it come true.

“I have dreamt about winning since I was very young, but I never thought that it would happen with ‘Suomi Finland’ written on my chest,” she says. (Suomi is the Finnish word for “Finland.”) “It is an indescribable feeling to hear the national anthem on the podium.”