In ice hockey, and especially in pond hockey, the game can and does change directions in an instant.

First and foremost, Finland is crazy about hockey. All through the summer, we can guarantee you that certain Finnish people are looking at green fields and blue lakes and imagining them covered with smooth ice, perfect for skating.

Second, North America’s National Hockey League (NHL) – the best in the world, where several dozen Finnish players make their living – usually holds its Stanley Cup Finals in June, but the 2020 edition was delayed when the regular season was cut short in March because of the coronavirus. The league finally announced that the playoffs will start on August 1 and may stretch into early October. So it’s actually the perfect time for a hockey article.

Third, but not least, several Finnish guys and one Canadian – no hockey story would be complete without at least one Canadian – have had great success running Save Pond Hockey tournaments, which combine outdoor hockey with environmental activism. They’ve expanded the event from Helsinki to other Finnish cities, and in future seasons they plan to hold it in Sweden and Canada, as well.

Out on the pond 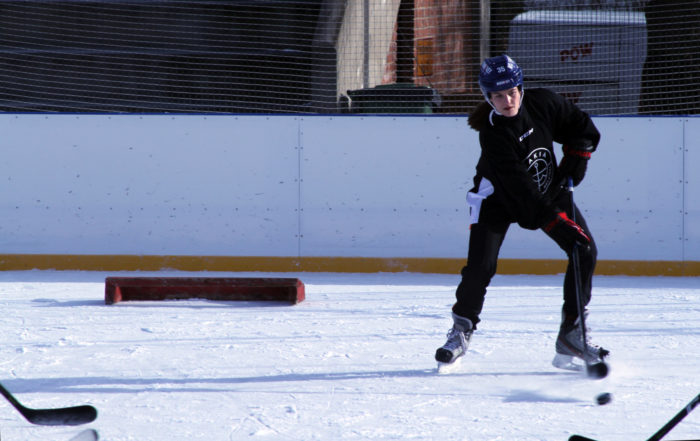 Emily, an American from Minnesota, flew to Finland to be with her fiancé. The day after she landed, she was on the ice at the Save Pond Hockey tournament in Tampere, playing as if jetlag didn’t exist. Photo: Peter Marten

Save Pond Hockey is exactly what the name says. “Pond hockey” refers to any outdoor rink where friends meet and play informal games. The tournament raises awareness and money among members of the hockey community, or hockey family, as they often call it, to help counteract climate change.

Because without proper winter, there won’t be any outdoor ice rinks.

Perhaps more than any other place, rinks in parks and backyards, and on frozen ponds, capture the spirit of hockey. Kids can hang out there and get as much ice time as they like, and dream about playing in the top leagues. Parents can bring their families and teach the kids to skate.

Tampere, a city whose location could be described as the central-western part of southern central Finland, is the only town with two teams in the nation’s principal hockey league, the SM Liiga. It’s also the home of the Finnish Ice Hockey Museum, the biggest hockey museum in Europe. Tampere’s reputation as a hockey-mad town in a hockey-crazy country makes it the perfect place to check out a Save Pond Hockey tournament.

Change within your lifetime 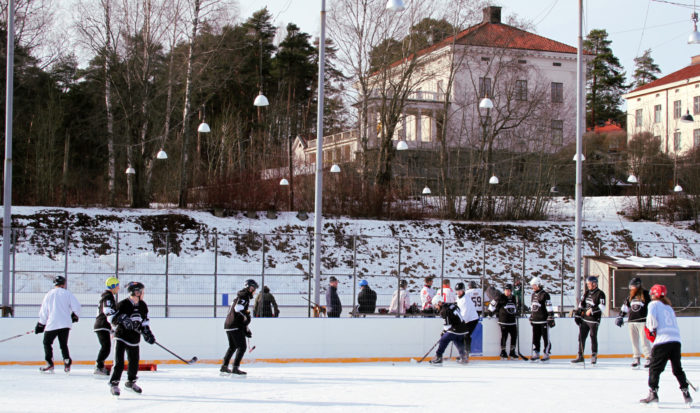 The 2020 Save Pond Hockey tournament in Tampere took place in a park on Koulukatu (School Street), a location where people have played ice hockey since before the Second World War. Photo: Peter Marten

On March 7, 2020, the day of the Tampere event, the weather was still cold, and folks in Finland could not yet truly imagine having to stay away from workplaces, schools, restaurants and other people. Two weeks later, the Save Pond Hockey tournament scheduled for the northern city of Oulu had to be cancelled because of measures aimed at slowing the spread of the coronavirus.

In Tampere, I met Steve Baynes – the Canadian of this story – who arrived in 2010 in the central Finnish city of Jyväskylä. He studied corporate sustainability there, and later moved to Helsinki.

“We got the idea for Save Pond Hockey because we were, of course, reading and learning a lot about climate change,” says Baynes, who grew up in Vancouver. “A lot of the Finnish guys in our hockey club were seeing changes in their own lifetime also, from when they were kids to now. A couple of those things put together made us feel like we just needed to do something – we didn’t really know what.”

Save Pond Hockey first saw the light of a Finnish winter day in 2015. “We’re a bunch of hockey guys,” says Baynes, “so we started organising hockey tournaments.” [Article continues after video.]

In the short documentary Saving Pond Hockey, you can meet several players and hear them talk about why they love the game.
Video: Jonas Julian Köck; embedded with permission of Save Pond Hockey

An appetite for hockey 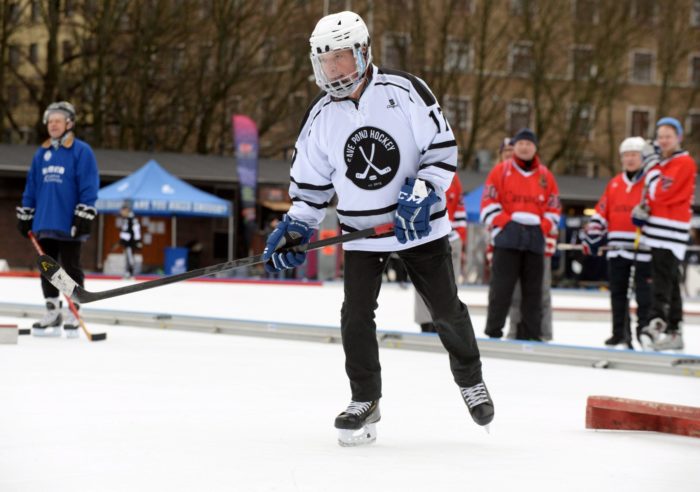 Finnish President Sauli Niinistö is a hockey enthusiast and has taken part in Save Pond Hockey in Helsinki several years in a row (picture from February 2020). Photo: Mikko Stig/Lehtikuva

That’s how we came to be standing beside two outdoor rinks in Tampere, watching a one-day tournament with 12 teams competing in a series of 18-minute, four-versus-four games. Each playing area took up a third of a rink. The goals were small and low, and there were no goalies.

Looking over the schedule, you could see team names such as the Pajusalmi Maple Leafs (inspired by the NHL’s Toronto Maple Leafs), Lakikiekko (Law Puck) and Lihaa ja perunaa (Meat and Potatoes, inspired by somebody’s favourite dish). One squad called itself Hattrick Swayze.

Koulukatu Rink, the site of the event, is also the location where Finland’s first artificially cooled rink opened in 1956, although there had been naturally frozen ice rinks on the spot since 1934.

Helsinki experienced a rainy, relatively warm winter in 2019–20, with the average temperature each month staying above zero degrees Celsius (32 degrees Fahrenheit). During such a mild winter, artificially cooled rinks are the only outdoor ice available. Only a few exist, so the contrast is stark compared to a truly cold winter, during which cities maintain rinks in numerous parks for months on end. Indoor arenas don’t offer the same kind of informal gathering place and neighbourhood spirit. 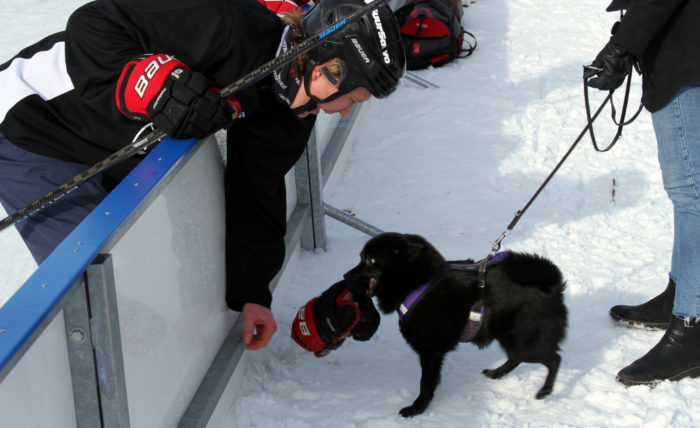 Kerttu the dog showed up to bark in support of the players in Tampere, and to help keep track of their gloves. Photo: Peter Marten

Save Pond Hockey has expanded gradually since its start in 2015 in Helsinki, adding more cities. In 2020 the list included the eastern Finnish cities of Joensuu and Lappeenranta, as well as Turku in the southwest, and Tampere and Oulu.

“Next year we want to expand outside Finland’s borders,” says Baynes. “This [warmer winters brought on by climate change] is obviously something that threatens hockey players around the world.”

That was in early March 2020. In the interim, the coronavirus has affected people’s lives across the globe, and the situation is continuously changing. In June, the Finnish government raised the amount of people permissible at a public gathering to 500. Baynes confirms that, as of summer 2020, they are still planning to head for Stockholm next season, and hope to get to Canada, too.

Save Pond Hockey’s own brand of climate activism has attracted attention. Finnish President Sauli Niinistö has laced up his skates for the Helsinki tournament more than once, including 2020, and local hockey greats have been known to show up, too. Former NHL star Saku Koivu played in the Turku edition of Save Pond Hockey in February 2020.

“That’s exactly part of it, bringing the whole hockey community together,” says Baynes. “We’ve been able to reach out to some of these legends like Koivu and thankfully get their support behind what we’re trying to do.”