The most enthusiastic viewers climbed lamp poles trying to get a glimpse of the champions.

The victorious world-champion Finnish hockey team returned to a roaring, cheering, singing crowd of 100,000 fans (including our photographer) who packed Helsinki’s Market Square on May 16, 2011. Relive the evening with our slideshow below.

The Finnish Lions, who crushed Sweden 6–1 in the final game of the 2011 Ice Hockey World Championship in Bratislava, Slovakia on May 15, returned to Finland to join the celebrations that were already in progress on the streets of Helsinki. The jubilant, flag-waving crowd, dressed in blue and white, gathered on Market Square, climbing on balconies, lamp poles, windowsills and anything else they could find to get a glimpse of their heroes. Men, women and children sporting the Finnish colours joined a celebration that brought the whole nation together.

The impromptu festival culminated as the team took the stage one by one. Mikael Granlund, a 19-year-old stickhandling magician and the crowd’s favourite, was greeted with a roar that rose above everything else. The team was joined by celebrated singer and actor Sakari Kuosmanen, who led the assembled fans in a chorus of the “Finlandia” hymn by Jean Sibelius.

As the celebration reached its peak, President Tarja Halonen, wrapped in a blue and white scarf, stepped out to congratulate the players. Fireworks went off in the May twilight to complete the ultimate homecoming fest.

A sea of blue and white 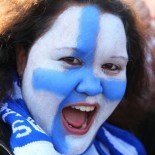 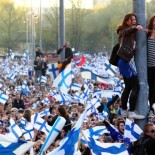 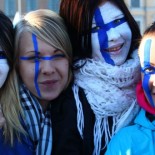 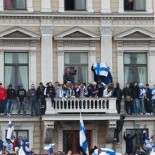 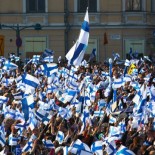 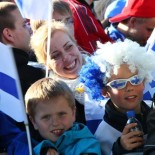 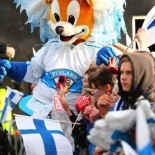 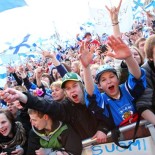 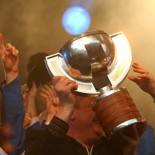 Photos by Tim Bird and Lehtikuva, May 2011
Text by Amanda Soila