When boys’ teams from Beijing Ice Hockey Association (in white) and Helsinki’s Jokerit met in Finland, most of the action took place in front of the Chinese goal.

It was never a contest inside Malmi Ice Hall, an arena just outside the Finnish capital. In two periods of play the Finns won, 9–0, with virtually all of the action occurring in front of the Chinese goal.

The Finnish team was a youth squad from Helsinki club Jokerit; their opponents came from the Beijing Ice Hockey Association (BHA).

The outcome wasn’t the point, not with Finland being a world power in the sport and China just recently catching on to the nuances of hockey. The game formed part of a much broader partnership between the two countries, designed to make the Chinese national hockey teams more competitive in advance of the 2022 Beijing Winter Olympics while also offering possibilities for Finnish businesses. 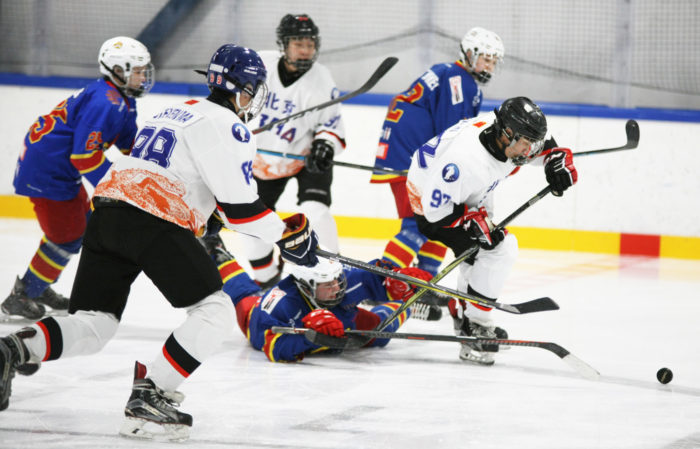 The chase is on: The Chinese players travelled to Finland to gain experience in a country where ice hockey is a national obsession.Photo: Hernan Patiño

The idea began in 2015, when Jokerit executives began hearing rumours that a team from Beijing wanted to join the Kontinental Hockey League (KHL). At the time, Jokerit’s men’s team was itself a relatively new addition to the Russian-based KHL, which now includes clubs in seven countries. Beyond the novelty of a professional ice hockey team located in China, Jokerit’s management team saw the potential of a Finland–China cooperative that could benefit both countries.

As Finland lends its vast know-how and experience in the sport to a hockey novice like China, Finnish companies such as those that specialise in building hockey rinks are looking at the possibility of market inroads in China in the lead-up to the Olympics. (A Finnish firm built the rinks for the 2014 Winter Olympics in Sochi, Russia.)

Beijing-based Kunlun Red Star entered the KHL in the 2016–17 season; at the time of writing, the club has five Finns on the roster and a Finnish head coach. Before Beijing joined the league, Jokerit management had already made a number of goodwill trips to China. The ongoing partnership is even creating growth opportunities for the Finnish tourism industry.

“This has a huge impact for the winter-sport market here in Finland, with all the Chinese tourists coming to Finland,” says Jussi Rapo, general manager of facility operations for Jokerit, after returning from his 25th trip to China since 2015. “And this is just the beginning. About 100 million Chinese people have a passport. They estimate that 350 million will have a passport in the next five years.” 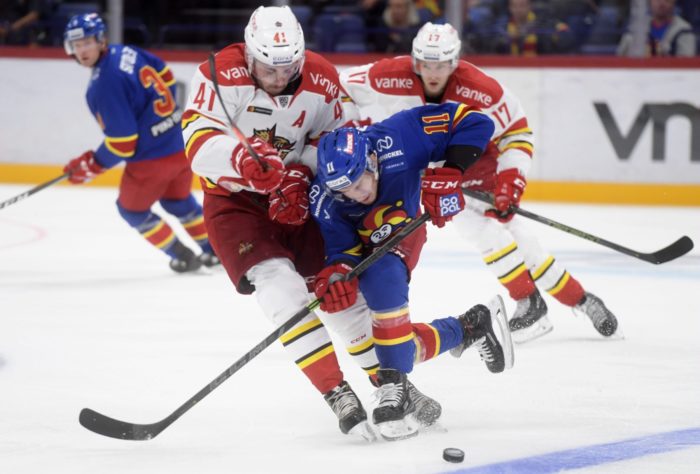 The big boys: Steve Moses (11, in blue) of Jokerit and Taylor Beck (41) of Beijing’s Kunlun Red Star fight for the puck during KHL action in Helsinki.Photo: Vesa Moilanen/Lehtikuva

In the long term, the benefits of attracting tourists from a massive country that is just beginning to appreciate winter sports could pay off for Finland. Meanwhile, Finnish expertise in providing hockey rink technology to China could enhance Finland’s industrial base.

For now, Rapo says the sports-first goal of the partnership is to help China develop viable national hockey teams. The coach of the Chinese men’s national hockey team is a Finn, Jyrki Aho. China wants its men’s and women’s teams to be competitive in time for the Olympics, but that is a herculean challenge, given that there are only 15,000 hockey players in a country of 1.4 billion. Finland, by comparison, has five times as many players among its 5.5 million inhabitants.

With a series of ongoing games in both countries, Finnish hockey ambassadors are teaching skills and coaching philosophies to their peers, but Rapo says that cultural differences sometimes impede progress. Whereas Finland became a dominant power in hockey partly by adopting knowledge from other countries and modifying it to suit the Finnish culture in a process that took many years, China wants to go straight to the competitive stage.

“They want it to happen overnight,” Rapo said. 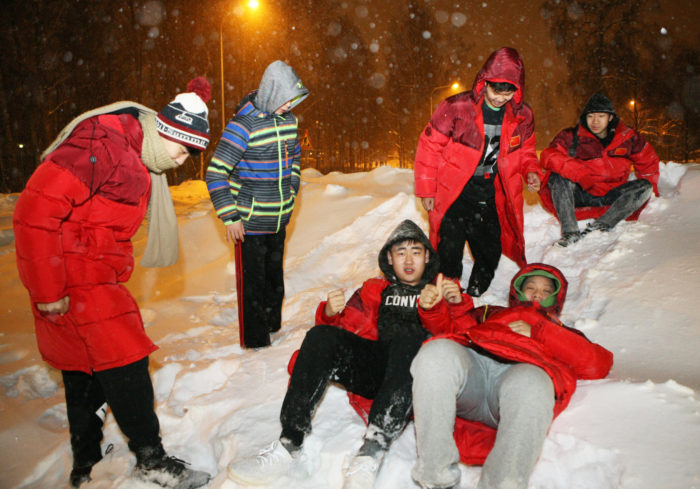 The boys from Beijing had fun playing in the mounds of snow outside the arena, too.Photo: Hernan Patiño

In a recent game in China, Finland’s ten-year-old boys’ team was soundly beaten. While the Chinese are quick learners, Rapo said many players quit before they are 12 to concentrate on academics.

Jiří Novák, the Czech coach in charge of the BHA under-16 team that failed to score in the game in Malmi, says life is difficult for aspiring Chinese hockey players. On top of hours of school study, these guys face long trips across Beijing to reach the few available ice rinks.

However, Novák believes the humbling experience in Helsinki can only help his players.

“These boys were in the Chinese championships and they won games by a big margin,” he says of his team. “They think, ‘We are good.’ But when they compare with a good hockey-culture team, they see a big problem.

“It’s good for us, because the boys can see what the Finnish boys can do. I hope that when we get back to Beijing they train harder.”

Hockey star Patrik Laine, known for beating goalies with quick, unreadable shots, is enjoying playing in North America and looks set to win the Calder Trophy, given to the NHL rookie of the year.