Northern Finland is known for its salmon rivers, and salmon soup is a standard meal that appears on dinner tables and restaurant menus all over the country. (This photo is from Story, a restaurant in Helsinki.)

Almost one-third of the country is located above the Arctic Circle. The rich history, culture and wilderness of northern Finland are reflected in the area’s cuisine.

The wide rivers of Finnish Lapland, Finland’s northernmost region, are famous for their salmon fishing. Cloudberries grow across the north, but only in swamps and bogs, making them a hard-won prize.

Reindeer roam the fells and forests of the far north. Reindeer herding is connected in numerous ways to the culture and traditions of the Sámi, the indigenous people whose homeland is split into four parts by the borders of the nation-states Finland, Sweden, Norway and Russia.

[This is part of a series of recipe articles that show off dishes from the north, south, east and west of Finland (although many of them are now common all over the country), not to mention an extra piece about cake, bread and buns. We’ll add links to the other articles as they are published.] 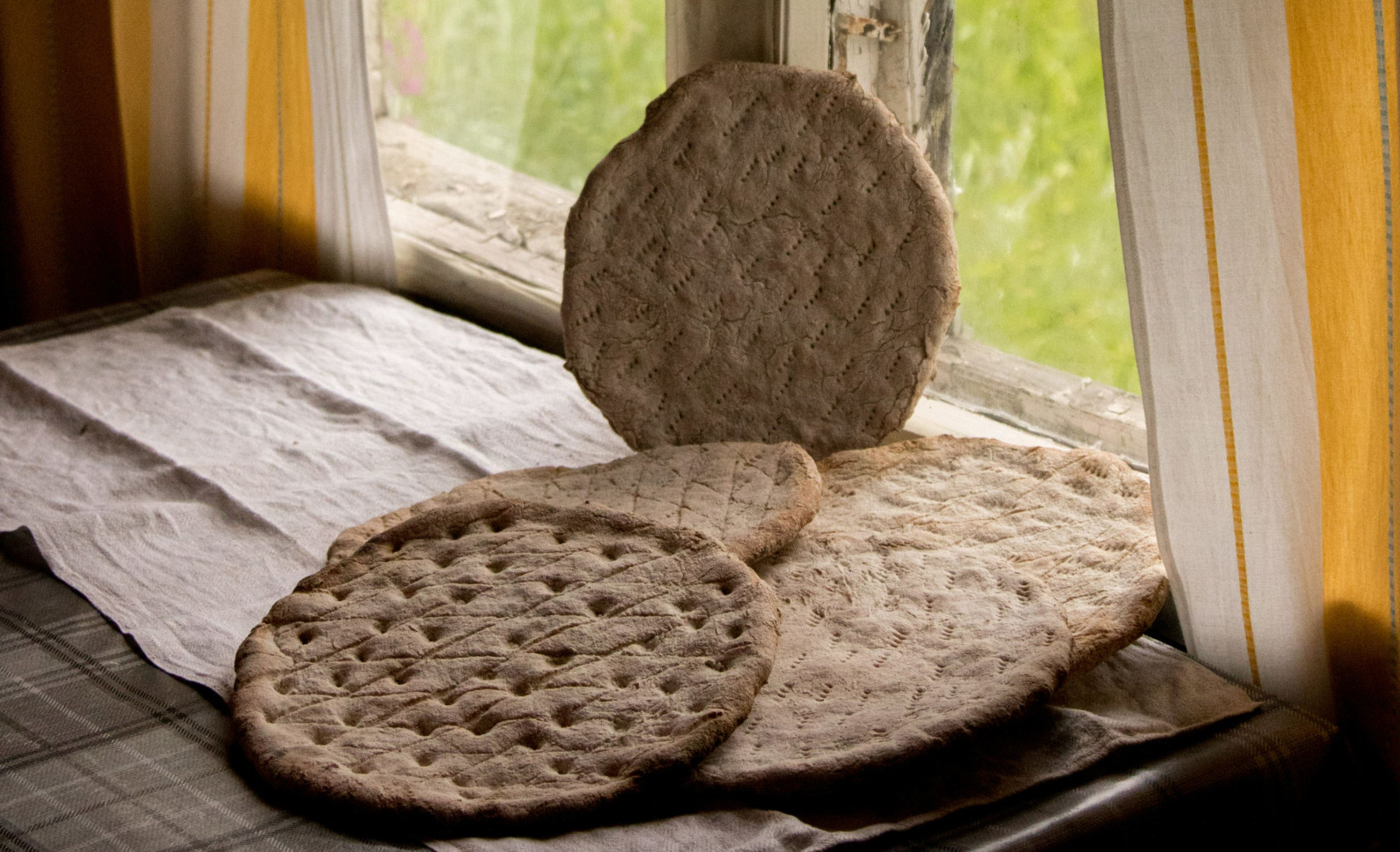 In Finnish this flatbread is called rieska, which is an old word for bread, and you can find many variations of it in different regions. For the Lapland version, there are two things to keep in mind for the perfect result: cold and hot. The ingredients must be very cold, so it’s better to use ice-cold water and to chill the flour in the fridge in advance. The oven has to be as hot as it can be – 300 degrees Celsius would be perfect, but usually the maximum is around 275 degrees Celsius in home ovens.

Preheat the oven to 300 degrees Celsius or as close as possible, with the baking sheet in the oven, too.

Place all the dry ingredients in a large bowl and mix. Add the cold water in the middle and work it into a dough using your hands. Work quickly to keep the dough cold, and do just enough that the dough holds together.

Scrape the dough onto a work surface and divide it in half. Press each piece with your knuckles and, with the help of extra flour, into an even circle with a diameter of 30 centimetres. Then prick them all over with a fork to keep them flat during baking. Place the flat breads onto the preheated baking sheet and bake for 5–8 minutes until done. There are two ways to cool them. If you want soft version, stack them after baking and cover them with a kitchen towel. The other way is to cool them on the oven rack to get a crispy result. 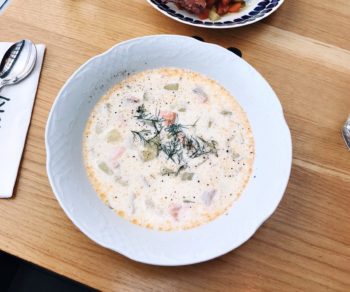 You can make Finnish salmon soup with or without cream in the broth.Photo: Joonas Ojala/Story Restaurant

We include two different versions of this recipe. You can use different types of fish, but in Finland the most common one is salmon. Making your own broth is recommended, but high-quality store-bought broth can also work. Salmon soup is a standard meal that appears on dinner tables and restaurant menus all over the country.

Rinse the bones well, put them into a saucepan and fill with just enough cold water to cover the them. Bring it to boil, then lower the heat to simmer. Carefully skim off any white foam, add spices and simmer 20 minutes with the lid on. Strain the broth.

Dice the fish into bite-size cubes and salt them lightly. Cover and put in the fridge. Peel and cut vegetables. Cut the potatoes into two-centimetre cubes and the carrots into one-centimetre cubes. Melt the butter in a soup pot and sweat the chopped onions for approximately 10 minutes on low heat. When the onions are translucent, add potatoes, pepper and broth. Bring to a boil, then add carrots and reduce to a simmer for 10–15 minutes, until potatoes are tender and add cream. Remove the pot from the heat and add the fish. Mix gently and let stand for ten minutes. Sprinkle plenty of chopped dill and chives on top.

The eastern Finnish region of Kainuu is not as far north as Finnish Lapland, but it’s still about a seven-hour drive northeast of Helsinki. The Kainuu version of salmon soup omits the cream. Instead, the fish broth is thickened with rye flour.

Dice the fish into bite-size cubes and salt them lightly. Cover and put in the fridge. Peel and cut vegetables. Cut the potatoes into two-centimetre cubes and carrot one-centimetre cubes. Melt the butter in a soup pot, add the rye flour and mix for two minutes. Add the chopped onions and continue approximately five minutes, being careful not to burn the flour. Add potatoes, peppers and broth. Bring to a boil, then add carrots and reduce to a simmer for 10–15 minutes, until potatoes are tender. Remove the pot from the heat and add the fish. Mix gently and let stand for ten minutes. Sprinkle plenty of chopped dill and chives on top. 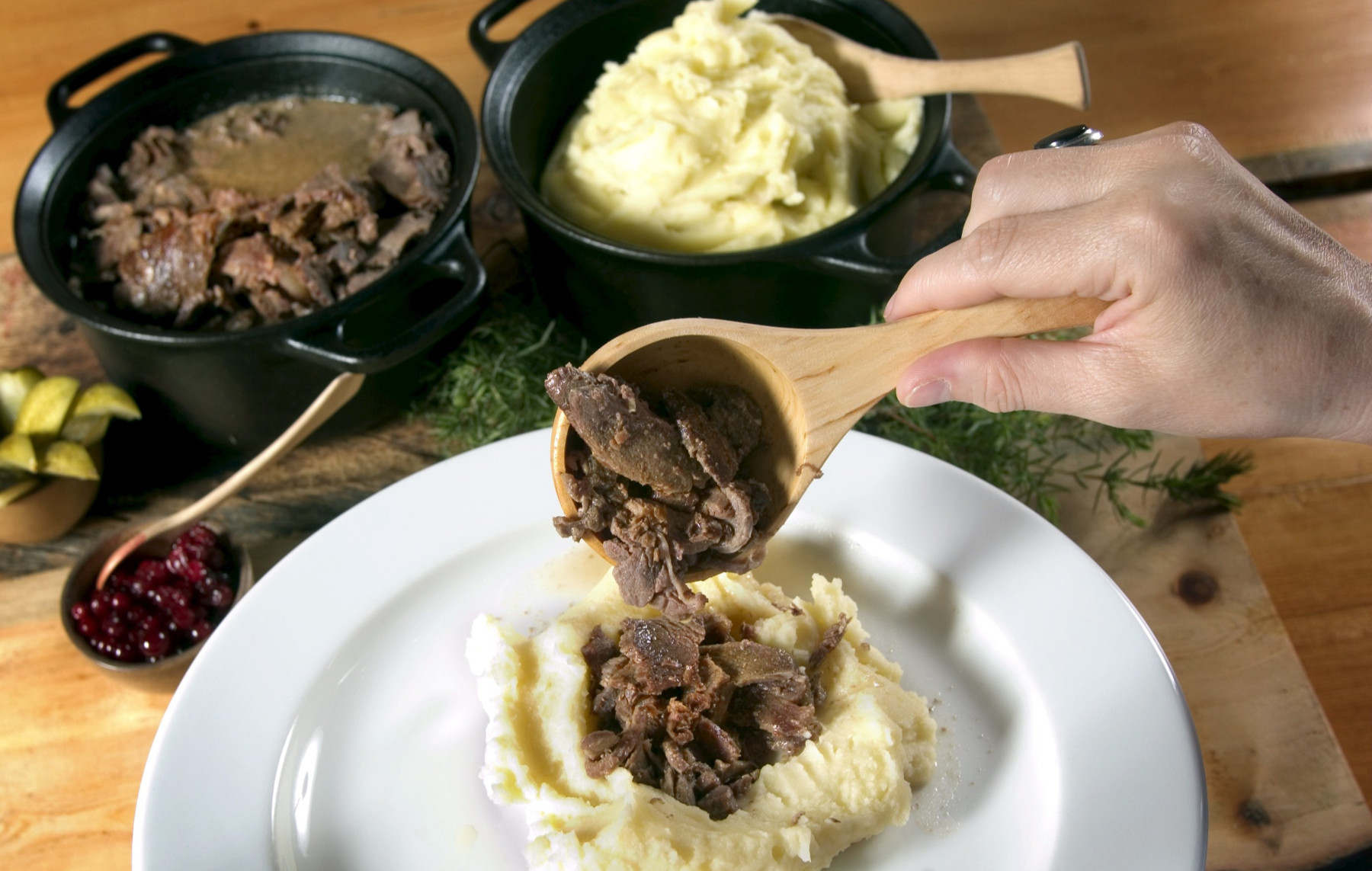 Poronkäristys, the traditional reindeer meat dish shown here, is typically served on top of potato butter purée and garnished with lingonberries. Our recipe reimagines it as reindeer osso buco, and keeps the potatoes and the lingonberries.Photo: Soile Kallio/Str/Lehtikuva

Traditional recipes for reindeer abound in Finnish Lapland, and the most famous one is sautéed reindeer, poronkäristys in Finnish. For this different version, we’ve made changes to the recipe and borrowed a term from Italian, calling it “reindeer osso buco.” You can use other meat, such as venison, if you have no access to reindeer meat.

Peel and cut the vegetables into large pieces. Cut the head of garlic in half. Place a thick-based casserole pan over a high heat and add a splash of oil and half of the butter. Dust the pieces of reindeer in flour and fry until nicely browned on both sides. Remove from pan and set aside. Turn the heat down a bit and add the rest of the butter. Add the garlic to the casserole, sliced side down, and brown it well. Add the vegetables and mushrooms and sauté until soft. Add the broth, spices and rosemary, put the lid on and simmer for 2–3 hours until the meat is tender. Pick up the meat and set aside. Strain the broth into another saucepan, bring it to a boil and reduce by half. Season with salt and black pepper and add the lingonberries and meat. Serve with potato butter purée. 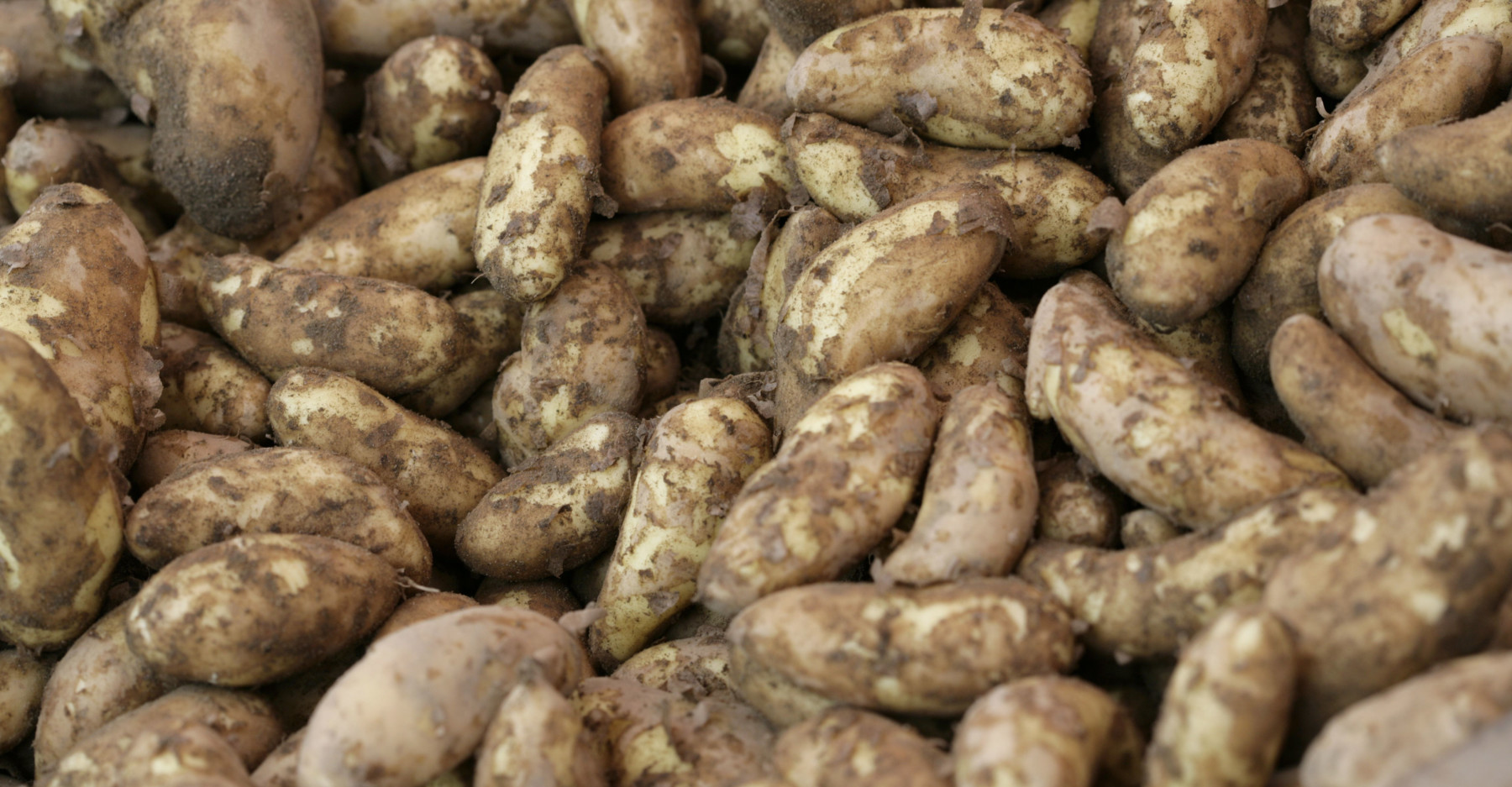 This dish is similar to regular mashed potatoes, but the only ingredients are potatoes, butter and salt, so the result is a richer, thicker purée. Traditionally it uses puikula potatoes, a special variety from Finnish Lapland with a super-high starch content. However, you can substitute it with any high-quality starchy variety. For more flavour, use browned butter. You can cook the potatoes using different methods, for example by steaming, but roasting them in the oven yields more flavour.

Preheat the oven to 185 degrees Celsius. Wash the potatoes and cook them in the oven for approximately one hour, depending on the size of the potato. Let the potatoes cool for a few minutes, cut them in half and spoon out the flesh, leaving the skins behind. Put the hot potatoes and butter cubes in a mixing bowl and mash until smooth. Season with salt. 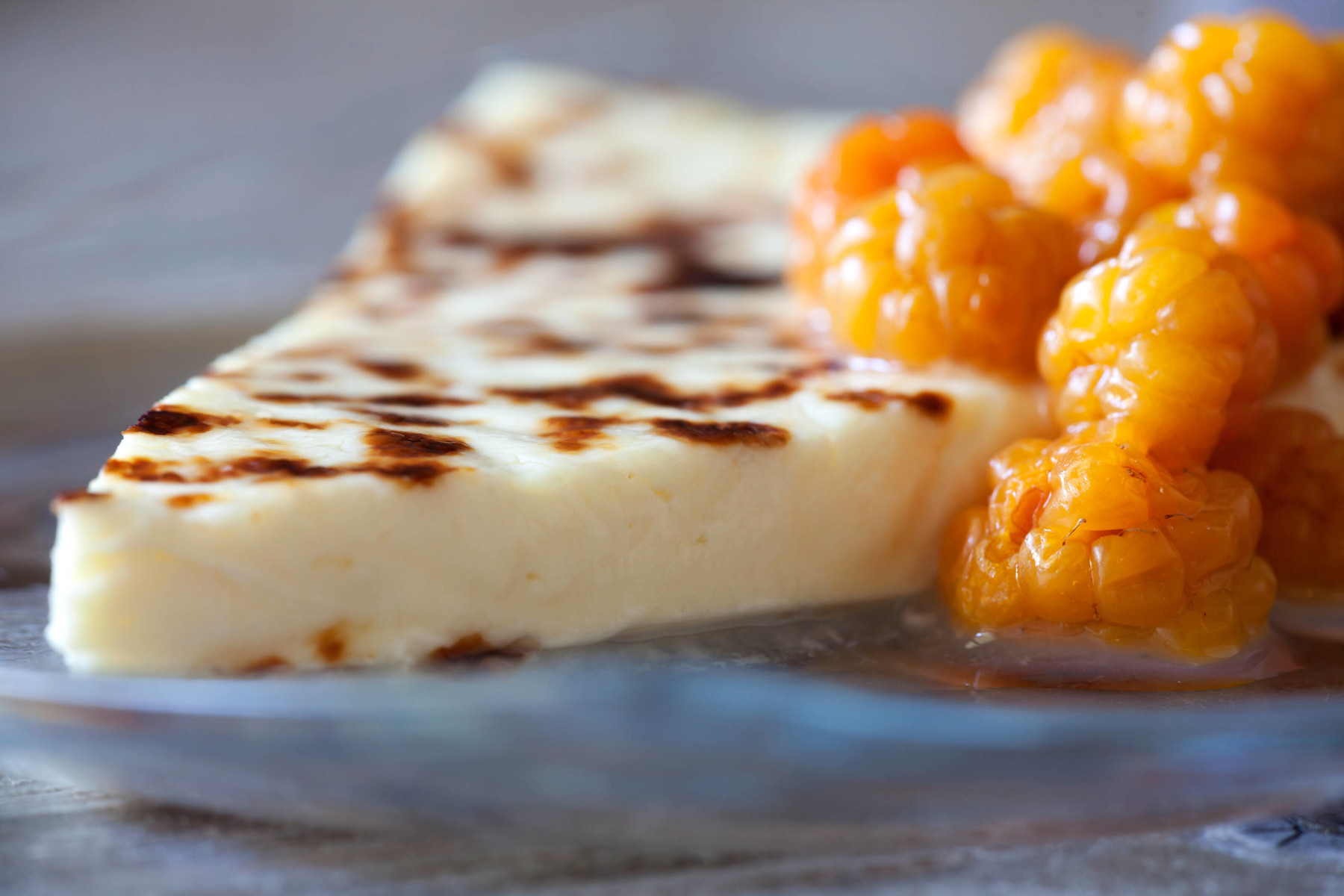 Baked cheese comes from the northern part of Finland. The name varies in different regions, but the Finnish word leipäjuusto actually translates to “bread cheese.” It also has a nickname, “squeaky cheese,” because it squeaks while munching. Traditionally it´s made with colostrum (first milk) and cooked on an open fire. For example, in a wood-heated sauna, the cheese is baked in a skillet in front of the open fire hatch of the stove. You can bake it in a regular oven as well.

Heat the milk to 37 degrees Celsius. Mix the dry ingredients and rennet (use the amount indicated on the bottle) and stir briskly for one minute to mix everything evenly. Remove it from the heat and let it sit for 30 minutes. Gently cut the curd into cubes a few centimetres wide and let it sit for another 15–30 minutes. Line a colander or sieve with muslin cloth. Using a slotted spoon, spoon the curds into the muslin. Fold the muslin over the top and let the liquid drain from the cheese for at least 20 minutes. Transfer cheese onto a baking tray or into a skillet and broil at 250 degrees Celsius for about ten minutes, until the cheese is has brown spots on it. For a more full-bodied taste, turn the cheese and bake it on the other side, too. Serve with jam, preferably made from cloudberries, a species native to Arctic region.

Finnish traditions stay strong in the US
ChristmasChristmas traditions