Santa Claus himself took part in ThisisFINLAND’s Twitter chat just a short while before Christmas, and you can still read his posts online.

Santa Claus, who tweets as @Santas_Office, and one of his elves, Ferdie, joined ThisisFINLAND’s Twitter chat, #TiFChat, from the northern Finnish city of Rovaniemi.

With all the talk about artificial intelligence these days, have you ever wondered if AI could help Santa Claus during his busiest time of year?

We have, so we asked him to join us for a #TiFChat, a ThisisFINLAND Twitter chat, about it. And he did!

Since Santa Claus lives in northern Finland (as everyone knows), we have a few connections – friends of friends, and distant cousins, and friends of distant cousins and such. Next thing you know, Santa managed to find time for an online conversation despite how busy he was preparing for his annual delivery run.

Santa Claus and one of his elves, Ferdie, logged on from the northern Finnish city of Rovaniemi, where he maintains a workshop and a post office right on the Arctic Circle. Santa tweets as @Santas_Office. Also joining us were a whole bunch of Finnish AI experts, and numerous Twitter users around the world, including kids at a school in the US.

You’ll find a couple highlights from that amazing Twitter chat in the slideshow below. To relive the whole thing, search for “#TiFChat #Santa” on Twitter. 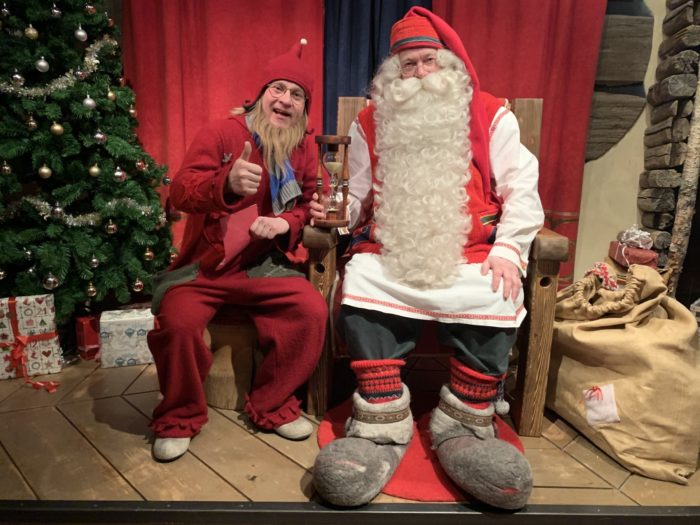 Ready to go: Santa Claus (@Santas_Office) and one of his elves, Ferdie (@FerdieTheElf), count down the minutes until ThisisFINLAND’s Twitter chat, #TiFChat, begins. Photo © ThisisFINLAND 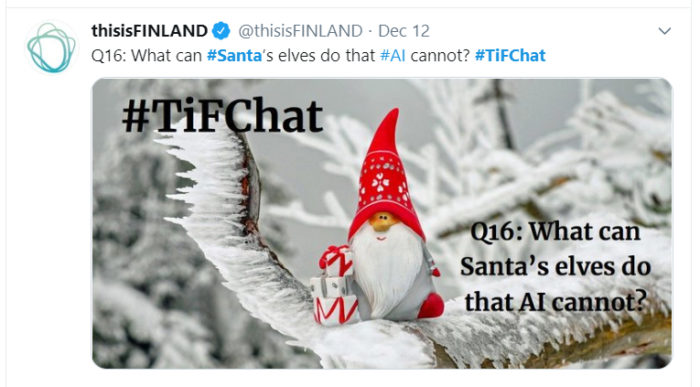 ThisisFINLAND, the invited AI experts, and the general public had tons of questions for Santa Claus, such as “What can Santa’s elves do that AI cannot?” Photo © ThisisFINLAND 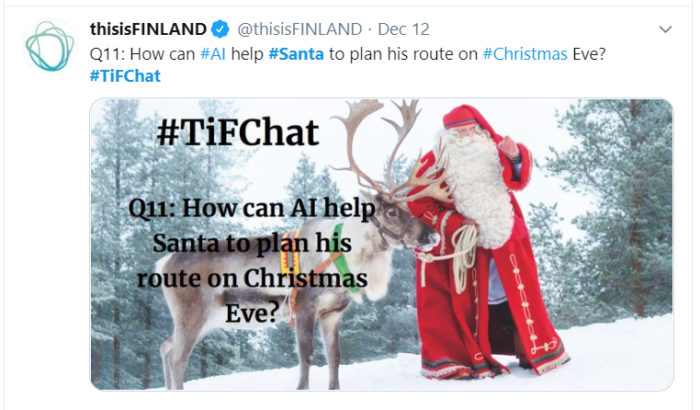 Or how about this? “How can AI help Santa to plan his route on Christmas Eve?” Photo © ThisisFINLAND 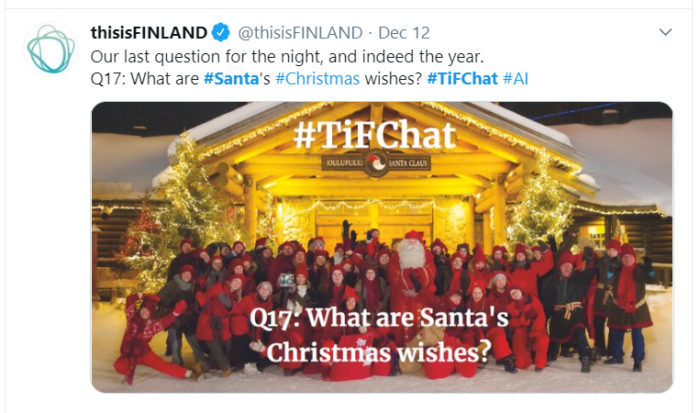 Perhaps most importantly, “What are Santa’s Christmas wishes?” Photo © ThisisFINLAND 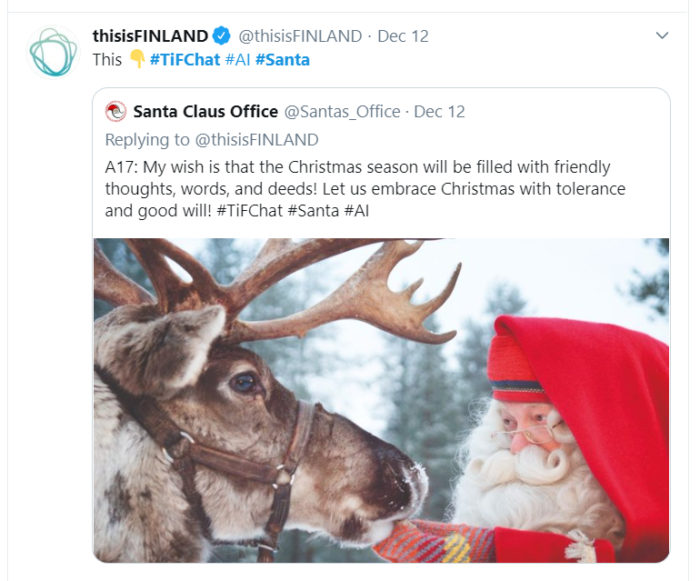 “My wish,” says Santa Claus, “is that the Christmas season will be filled with friendly thoughts, words, and deeds! Let us embrace Christmas with tolerance and good will!” – This! Photo © ThisisFINLAND

Santa has installed several artificial-intelligence innovations to help keep gift deliveries rolling. But as ThisisFINLAND’s videos show, he still has the answers when the machines are stumped.

Ever wonder where letters to Santa Claus wind up? We pay him a visit in Finnish Lapland at Santa’s Main Post Office.

Home in time for Christmas in Finland
ChristmasModern Christmas

Home in time for Christmas in Finland

Remembering her childhood holidays after years abroad, a Finnish journalist concludes that Christmas spirit itself originates in Finland.