The cottage was decorated for the visitors’ arrival with twinkling outdoor ice lanterns. (In the foreground is a genuine Finnish kick-sled, handy for getting around on snow-covered village paths.)

For most Europeans, Christmas is still firmly a family affair involving all the traditional pleasures as well as pressures: outreaches to distant relatives, extensive purchasing of gifts, strenuous travel and often strained relations.

For Finns, geography imposes certain constraints, not least the weather, but for many visitors these are as exotic as they are extreme. Despite the documented rise in temperatures over the last 40 years the average for Helsinki between December and February is still four degrees Celsius below zero (25 degrees Fahrenheit), and the chances of a white Christmas in the capital are given as 60 percent.

Flight to the countryside 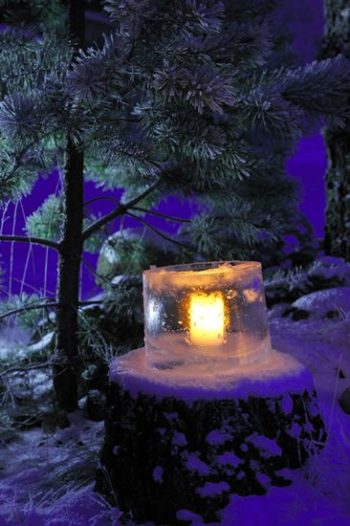 Some Finns decorate their yards with ice lanterns. You let a bucket of water freeze partway then pour out the excess, leaving a hollow space for the candle. Photo: Pekka Sakki/Lehtikuva

There is a steady movement of the Finnish population from rural municipalities, and particularly to the capital Helsinki, but the Christmas period sees a complete reversal of the flow. Despite the increasingly urban population structure, the option to revert to family tracts and traditions is irresistible, making for a very quiet capital during the holiday period.

Long-term Helsinki resident Charles Gil is typical of the generation who live their daily lives in the city centre, but flee to the forests for respite at Christmas: “Before our children were born we spent one Christmas here, but the city was very quiet indeed. We have been at my mother-in-law’s every time since then.” Despite the relaxation of many old restrictions on bars and entertainment, the streets are very empty for the public holiday.

The experience of my first winter season in Finland, in the mid-1980s, is seared into my memory on account of its uniqueness. Our group of five foreigners from Germany, France and the UK had rented a winter break from a brochure: a cottage by the lake in Ruokolahti, a community on the eastern edge of the country, near the border of what was then the Soviet Union.

The owners had never had rental visitors over Christmas before, but the building was well insulated against the outside temperature of 20 degrees Celsius below zero (four degrees Fahrenheit below zero), and the family made a great effort to accommodate us. They collected us and our rucksacks and skis from the nearest station, tolerated our efforts to communicate in rudimentary Finnish and, most spectacularly, they had decorated the cottage for our arrival with twinkling outdoor ice lanterns and a roaring fire in the fireplace.

The manager and owner was a farmer, and he was determined to instruct these gormless townies in the local ways – and in Finnish. Raising water daily from the hole cut in the lake went fine, as long as we remembered to cover the hole each time to stop too thick a layer of ice from forming. Accompanying him on his rounds to check the winter fishing nets, spread between holes bored through the ice, was chilly but very satisfying – there were always some fish.

Tussling with the elements 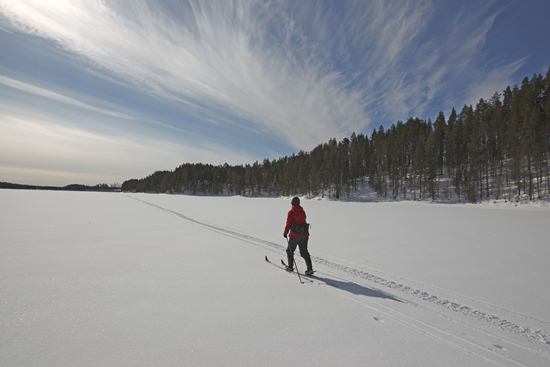 A greater challenge arrived when he presented us with a catch from one of those nets, a one-and-a-half-kilo (three-pound) burbot. The species forms a common fish in northern waters, related to cod in genus and taste, but possesses an extremely slimy and slippery skin that must be peeled off before cooking. We didn’t understand his instructions very well, but with the help of many hands the fish was skinned, cooked and enjoyed.

Equally memorable was the ski trip that two of us made through the hazy dusk, five or six kilometres across the lake in a mild snowstorm to the historic Ruokolahti Church, a beautiful 150-year-old wooden building, filled to bursting with the Christmas Eve congregation.

Facilities for visitors to Finland during Christmas have boomed since those days, with ski centres in Finnish Lapland offering ranges of holidays from hotel to chalet. Arrangements and prices vary, but traditional Christmas weather represents the norm for virtually the whole country.

We take a brief tour of the cherished customs and events that Finns associate with Christmas.