Home in time for Christmas in Finland

Remembering her childhood holidays after years abroad, a Finnish journalist concludes that Christmas spirit itself originates in Finland.

Anticipating Christmas all through December contributes to Finnish holiday spirit, but of course opening presents is a big event.

After more than a decade abroad, a Finnish journalist concludes that Finland must be the home of not only Santa Claus, but also of Christmas spirit.

Living in the US from 1998 until 2009, my time spent at home in Finland was split into two romantic extremes: The glimmering, airy summer and the candlelit, clove-scented Christmastime.

Because of school and university schedules, I rarely had the opportunity to return to Finland during other times of the year. And while my work schedule led me to forego a few summer trips home after my parents returned to Finland in 2002, the thought of staying in North America for Christmas never crossed my mind. 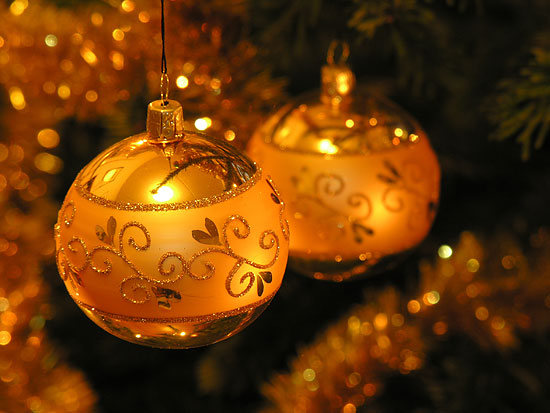 For the Finns, this glowing holiday represents a midwinter oasis.Photo: Vesa Greis/Kuvaliiteri

The holidays of one’s childhood are usually difficult to live down, but after experiencing the preholiday bustle of several American cities, I’m convinced that Finland shouldn’t only take credit for being Santa Claus’s country of residence. I dare to say that the entire notion of Christmas spirit, addressed in countless Hollywood films and Christmas cards, should be attributed to this sparsely populated corner of the world.

It’s not that our population throws glitzier holiday parties than the rest of the world or has a deeper connection to the religious roots of Christmas, but that, simply enough, our unforgiving climate lends added meaning to this celebration of light. To Finns, this glowing holiday has historically served as a figurative oasis in the middle of the frostiest, darkest time of the year, and we consequently approach it with distinctive humility.

Now, “humility” has nothing to do with abandoning the commercialism of Christmas. In my experience, Americans complain about Christmas decorations appearing in department stores in October just as much as Finns do, and our claim to Santa Claus also means that our focus on Christmas gifts is just as steadfast as that of American consumers.

However, unlike in the US, Christmas in Finland isn’t just another date in a series of holidays, each with its own decorations and cooking traditions. As the famously dreary Finnish autumn, void of the ubiquitous Halloween and Thanksgiving festivities of the US, turns into December, red candles and elves cut from construction paper begin to slowly appear in apartment windows and many of us catch a trace of the month-long anticipation we felt as children. 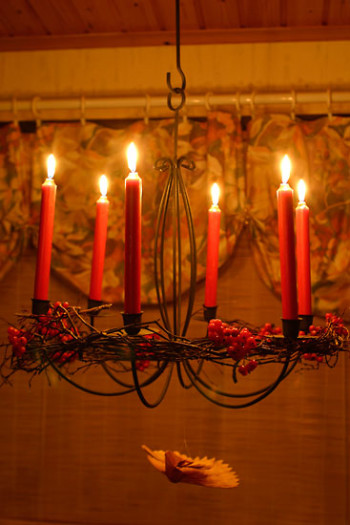 Christmas lights and candles ward off the dark of winter.Photo: Ismo Pekkarinen/Kuvaliiteri

Christmas in the US can feel like a rushed afterthought to Halloween and Thanksgiving – by the time families start plopping plastic snowmen on their lawns and coffee shops plug in their holiday playlists, Americans are already exhausted by the thought of yet another holiday.

The Finnish Christmas season builds gradually, like a row of Advent candles on a windowsill, from December 1 to Independence Day (December 6), Lucia Day (December 13) and Christmas Eve. And like one of our distinctively melancholy holiday songs contemplating subzero Nordic temperatures, the fragile nature of human life and our quest for inner peace, many of us begin feeling humble in the face of a harsh winter and grateful for the gentle, tangible glow of candles, however temporary.

In my childhood, some of the most important Christmas rituals fittingly stemmed from the idea of waiting for the holiday. In early December my mother and I gently unwrapped a family of elves made out of straw and paper mâché from a designated storage box (“They hibernate for the year,” she always said). Each Sunday morning my brother and I rushed to the breakfast table in our eagerness to be the one to light the next Advent candle. At school we rehearsed performances for both Independence Day and end-of-semester celebrations. 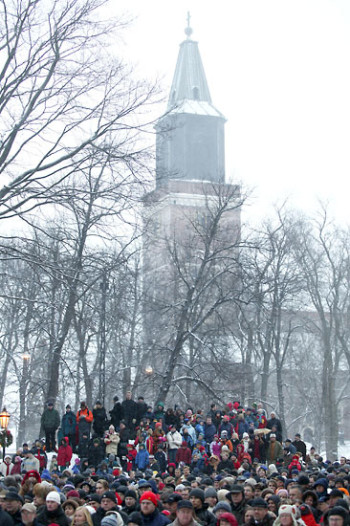 Thousands of people show up to hear the traditional Christmas Peace declaration in Turku on Christmas Eve.Photo: Esko Keski-Oja/City of Turku

When Finland was still inhabited mainly by peasant farmers, Christmas often marked the only day of the year when families could enjoy an abundant feast. Times have certainly changed, and these days very few in this country have to go hungry or live under the threat of war. Still, one reminder of our humble, uncertain roots still brings out the masses on December 24: the annual declaration of “Christmas Peace” in the city of Turku.

The tradition can be traced back to the Middle Ages, and continues to be held at the town’s Old Great Square. For as long as I can remember, my mother has made the live broadcast of this event required viewing for the entire family, and despite occasional protests, my brother and I have joined her in front of the TV each year.

“A general Christmas peace is declared, encouraging everyone to observe this celebration with appropriate devotion and otherwise behave quietly and peacefully,” reads the chief secretary of the city of Turku from a roll of parchment.

Year after year, I watch thousands of couples, families, toddlers and grandparents look on quietly as the chief secretary reads these words. Wearing fur coats, wool caps and ski jackets, their exhalations become visible in the frozen air as they proceed to sing the Finnish national anthem.

At least in my book, there isn’t a more appropriate day than this to feel patriotic – or to be thankful that there is such a thing as Christmas.