Take to the trails: Cross-country skiing forms a favourite pastime for many Finns in both urban and rural areas.

Here’s a helpful, humorous list of advice and hard-won wisdom about cross-country skiing from a Finland-based, Californian reporter who encourages you to take up the sport.

I was brought up in a warm climate. Upon moving to Finland, I wanted to find a way to keep fit during winter, enjoy nature’s wonders and participate in something typically Finnish. 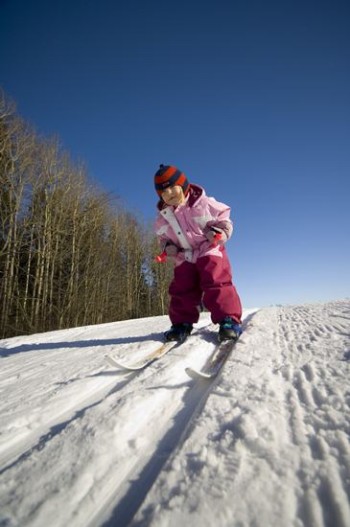 Start them young: The Finns begin skiing when they’re little, and if all those kids can learn, so can you.Photo: Juha Tuomi/Lehtikuva

I could have taken up ice hockey, but I wanted to keep my teeth. I could have tried ice fishing, but I didn’t have enough patience. So I chose cross-country skiing.

I visited a sporting goods shop and bought skis, poles and boots. Without bothering to take lessons, I went to a local ski area, watched what others were doing and simply began skiing. Marvelous, I thought, this is too easy to be true.

Then I came to a steep hill and started going down fast. A disturbing thought crossed my mind: I didn’t know how to stop, or even slow down. That adventure taught me that using your whole body as a brake was not such a great idea.

With practice, I improved at this dynamic sport, although I was usually the slowest person on the tracks. Cross-country skiing became an important part of my winter activities – after all, there wasn’t much else happening on Sundays.

I highly recommend that foreign residents take up this fine hobby. But beware! Every sport has its hazards. So here’s some advice – and some things to look out for: 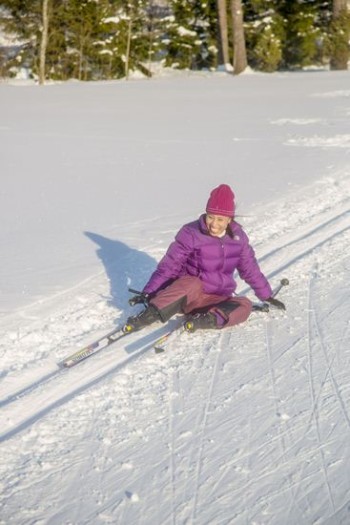 Falling is part of the fun: You’re going to fall, but just go with the flow. It’s only snow.Photo: Tero Sivula/Lehtikuva

I remember skiing on a clear, sunny day. The trail was well marked, and there were a lot of people around. Suddenly, it clouded up and began snowing. When the snow became heavy, I could no longer see any people or trail markings. I was lost in the forest and started to panic. Would I survive? Should I build a snow shelter? Then I saw someone.

“Can you help me out of this wilderness?” I asked.

“Certainly,” he said. “Just continue in this direction for a few hundred metres and you’ll see the main road.”

How embarrassing! I got “lost” in the suburbs of Helsinki. When in doubt, bring a map or a smartphone along.

He acts like the ski tracks are a motorway. He goes as fast as he can, sees nothing, stops for nobody and will run over you going downhill, uphill or on level ground. He has the facial expression of someone being chased by a big bear. But later, in the après-ski sauna, this madman changes his personality completely. He talks about how relaxing skiing is, about the beauty of the countryside, and about being at peace with nature. Watch out, though! Back on the tracks, he’ll become crazy again. Fortunately, most Finns are polite skiers.

When you’re whizzing along downhill, you’re sure to meet up with a sharp curve. And often in the middle of the curve, the outside track turns off at a 90-degree angle, and the inside track continues straight ahead (due to people pushing off to gain more speed). This results in you doing a spectacular gymnastic move and ending up in a headstand in the snow with your skis sticking straight up. Thank goodness for soft snow. Eventually, you’ll get the hang of it. 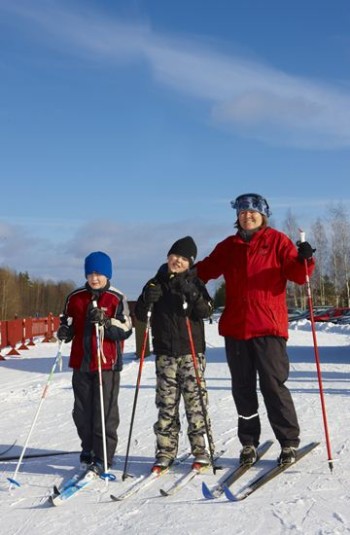 All ages: Cross-country skiing offers a good way to get out and enjoy the fresh air with your family.Photo: Tero Sivula/Lehtikuva

I always wondered why skiers carried around all those different waxes. Wax is wax, I figured. No need to show off, so I only bought one kind. Later, I was happily skiing on a cold, crisp day, when the weather warmed up. Then I noticed that the scenery was the same as it was 20 minutes ago. My skis were moving, but I wasn’t. I ended up carrying my skis all the way back, while those “wax experts” glided merrily by. Always bring along an assortment of waxes. (Nowadays you can also get waxless skis, which are generally adequate for hobby-level skiers.)

Feeling in top form one morning, I skied ten kilometres like I had wings on my ankles. While taking a break, my stomach started telling me to eat something. At a café, I noticed a sign that said, “Today’s Lunch Special.” The next thing I knew, I had just finished a schnitzel, French fries, vegetables, salad, bread, butter, milk and dessert. When I got back on my skis, that delicious food turned to lead in my stomach. And the ten-kilometre return trip felt like 100. Eat light on the trail.

Don’t think about work problems, relationship difficulties, politics or the threat of world destruction while out on the tracks. Cross-country skiing is a wonderful sport. Enjoy it in a good mood.