Not only is Finland the land of 188,000 thousand lakes, but every winter thousands of kilometres of ski tracks criss-cross the country. The age-old tradition of cross-country skiing remains dynamic, in part because of the young urbanites who are increasingly turning to the sport for its convenience and low budget threshold.

Cross-country skiing was invented in Scandinavia and can be traced back 5,000 years, according to the International Ski Federation. The sport offers great exercise and countless vistas of untouched nature, just like it says in all the guidebooks about Finland. 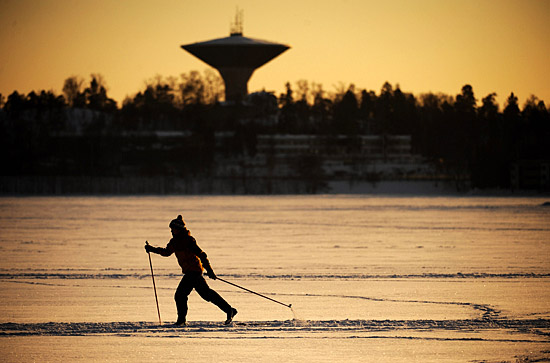 The sun sets slowly as a skier moves across the frozen water with city buildings in the background.Photo: Antti Aimo-Koivisto/Lehtikuva

Skis used to be made of solid wood and weigh more, but that gave way to various synthetic materials that gained popularity in the 1970s. Skiing technique has also developed: Finnish skier Pauli Siitonen, who won the Swedish long-distance race Vasaloppet in 1973, is credited with acting as one of the original pioneers of a “skating” style, in which the skier stepped out of the machine-prepared tracks in the snow and pushed off at an angle, instead of keeping both skis in the parallel grooves.

American Bill Koch popularised the style when he won the 1982 World Cup season. The arrival of the new technique gave rise to furore in the skiing world, but it soon became recognised as the fastest non-motorised way for humans to propel themselves across snow.

For serious skiers, this change of style demanded a new set of equipment as well as a considerable learning curve. The skating posture means that your skis angle outwards in a “V” shape, with your arms working in tandem to help propel you. Many young skiers find this a simple method to start with, especially in a country like Finland where ice skating is also popular.

With the growth of Finland’s urban areas apparently undiminished by the economic slowdown, the population of Finns and foreigners migrating to the capital area is quite significant. For young urbanites cross-country skiing offers a cheap solution to the problem of outdoor activity in winter. 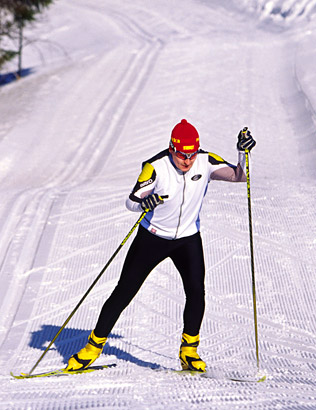 It could be argued that this skier resembles some sort of bug – but once you try cross-country skiing through the wintery Finnish landscape, you won’t look back.Photo: Visit Finland

University of Helsinki student Antony Starr grew up in a family where everyone skied, and now sees it as a good winter substitute for jogging. “Helsinki is an excellent place to ski,” he says. “There are three or four options near where I live in the neighbourhood of Viikki [on the outskirts of the city]. I try to cover 10 to 12 kilometres when I go out, but it depends on the weather as well as my schedule.

“Minus ten degrees Celsius [14 degrees Fahrenheit] is my limit – although once you’re warmed up, even that is not too chilly.”

Finlandia Ski, the most prestigious of the country’s mass participation ski events, attracted 5200 skiers in 2014. The race has a long history as a venue in the calendar of serious skiers. Held in the southern Finnish town of Lahti, it forms part of the international long-distance ski race circuit and draws hundreds of foreign participants. The majority of the contestants skate-ski their way along Finlandia Ski’s 50-kilometre route.

Once mastered, the skating technique gives a modestly healthy skier the means to travel at 10 to 12 kilometres per hour for sustained periods, while the pros are, as you’d expect, quite a bit faster. The winners of Finlandia Ski finish the course in about two hours and 20 minutes. Nowadays it’s the norm for the traditionalists in their tracks to be overtaken by athletic young bodies wrapped in skin-tight bespoke ski clothing, scything across the terrain.

They don’t care that their bulging goggles and long, flailing poles make them resemble a species of high-tech arachnid. They are flowing with the snow.