The venue is often an important aspect of the summer theatre experience. Probably the best known in Finland is in the atmospheric and historic setting of the Suomenlinna sea fortress in the entrance to Helsinki’s South Harbour.

The tradition of the outdoor summer theatre is a typically resourceful Finnish amalgam of an instinctive love for culture and a determination to exploit every second of finer weather. Who wants to sit in a darkened theatre with no windows when there is almost 24-hour daylight outside? But why should this mean that you can’t enjoy a good play?

The whole summer theatre subculture can be described as a delightful mix of Finnish weirdness, sisu (the idiosyncratic national quality of doggedness), self-made grassroots culture, and collective nostalgia. Everyone has been involved in a summer theatre project, had a friend or relative volunteering in one, or at least gone to see a “show.” And regardless of the weather, the memories are warm and happy.

According to a 2017 estimate, Finland stages around 400 summer theatres across the country. A couple of dozen of these are in Swedish, including the Teaterbåten (Theatre Boat), which tours between harbours, and the performances at Raseborg Castle near the southern coast. Many summer theatres are 100-percent amateur. A significant number are performed by an egalitarian blend of amateurs and professionals, making the whole endeavor an authentic community effort.

The projects are often eccentric, and profits tend to decline in proportion to their distance from the capital and other cities. Dozens of people are willing to invest their free time, and often hundreds of hours, in summer theatre productions. And then there is the Finnish mindset that, although the weather is in fact rarely optimal, people buy tickets for the open-air shows and turn up in either high heels or rubber boots. The whole process of preparation is an art in itself, similar to that made for elaborate Vappu (May Day) picnics. 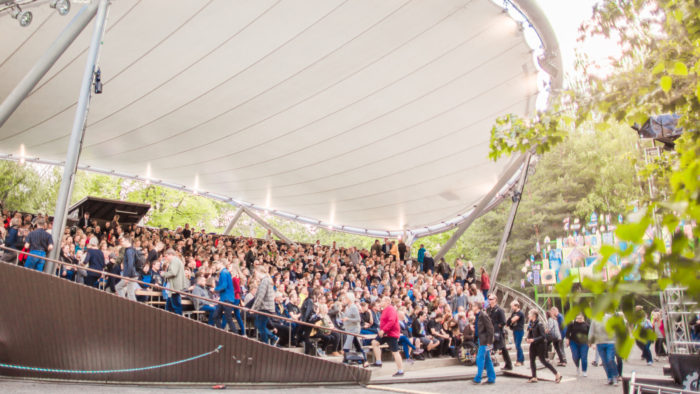 The whole summer theatre subculture can be described as a delightful mix of Finnish weirdness, self-made grassroots culture and collective nostalgia. Although the weather is in fact rarely optimal, Finns have the mindset to buy tickets for open-air shows and turn up in either high heels or rubber boots. Or in sandals, as in this picture from Pyynikki Summer Theatre in Tampere.Photo: Laura Vanzo / Visit Tampere

The venue is often an important aspect of the summer theatre (kesäteatteri in Finnish) experience. Probably the best known in Finland is in the atmospheric and historic setting of the Suomenlinna sea fortress in the entrance to Helsinki’s South Harbour.

“It’s a summer tradition for myself, my two daughters and one of their godfathers to go to the opening night of the Suomenlinna summer theatre,” says journalist Anna Ekholm. “They’ve built a roof on it now, but we have always gone whatever the weather, rain, wind or shine. And it’s always when I have my first grilled sausage of the summer!” Ekholm grew up in the small central Finnish town of Hämeenkyrö, and visits to the unique rotating theatre under the pine-covered Pyynikki ridge in the city of Tampere are cherished childhood memories – not least the hotdogs in the interval.

Popular with actors and audiences 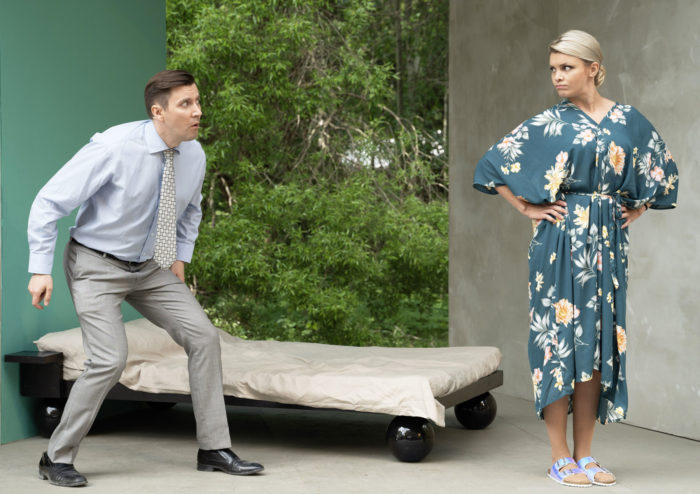 Juha-Matti Koskela (left) and Irina Vartia from the Pyynikki Summer Theatre rehearsing a Finnish comedy, Nuotin vierestä (Out of tune). Finland stages around 400 summer theatres across the country. A significant number of those are performed by an egalitarian mixture of amateurs and professionals, making the whole endeavor an authentic community effort.Photo: Joonas Järventie / Pyynikki Summer Theatre

“The programme in summer theatre tends to be light and entertaining, often farces, although sometimes there are classics or historical plays,” says Eva Buchwald, dramaturg at the Finnish National Theatre. “Actors enjoy working in the summer theatre.”

Summer theatre is popular with both actors and audience. “It’s part of people’s summer programme,” says Juha Kukkonen, director of Helsinki’s Ryhmäteatteri, which puts on the Suomenlinna show. “And most of the theatres are in really beautiful locations. It doesn’t feel like a job at all. You can enjoy the summer while you are doing something interesting in the open air.”

The pressure is still on for Kukkonen and his colleagues to put on a good performance. “At Suomenlinna the standard is really high. It differs from normal summer theatre in that you can stage any drama there. People are expecting something special and interesting.”