In search of Finland’s longest word

We scoured the forests for Finland’s longest word – and we may never understand the full implications of our discovery.

Our survey shows conclusively that these words ("car", "flower" and "word") are most definitely not the longest words in the Finnish language.

What’s the longest word in the Finnish language? When I wanted a definitive answer to this question, I decided to go about it the old-fashioned way: email.

I directed my inquiry to a forum full of people who, by definition, must be proud to call themselves language nerds: the mailing list of translators at the Finnish government ministries. Some of them implied by their silence that they thought I was wasting their time, but responses began to trickle in.

However, before we get to that, I should explain, very briefly, how Finnish works. It’s a language where it’s easy to make compound words by smashing smaller words together until they stick to each other, forming one larger word. Add maahan, “into the country,” to muutto, “move,” and you get maahanmuutto, “immigration.” Put  virasto, “authority,” on the end of that and you get Maahanmuuttovirasto, which is what they call the Immigration Service.

You can also add a great number of word endings – this is a point of contention because some people say it doesn’t count for purposes of finding the longest word. Most of our prepositions (on, at, to, for) are expressed in Finnish by sticking suffixes onto a word. Then you have additional suffixes that mean “also,” “neither,” “my” or “your,” or that symbolise a question. And that’s just the tip of the iceberg. Really. 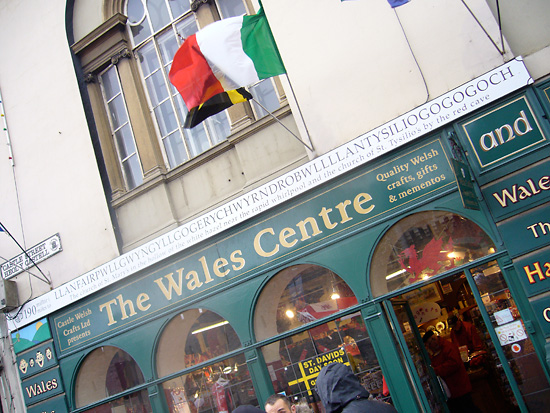 With words like “Llanfairpwllgwyngyllgogerychwyrndrobwllllantysiliogogogoch,” seen above this Welsh shop entrance (it’s the name of a village, and the longest place name in Europe), it’s likely that Wales is the one nation that will never be impressed by this article.Photo: Peter Marten

Back to the email: One of the first words to drop into my inbox is apteekkitavaraintarkastuslaitos, meaning “pharmacy product inspection office.” Not bad at 31 letters, but I have a feeling that we haven’t heard the end of this, and I’m right.

Next up is epäjärjestelmäl­lisyydes­täänköhän (32 letters), approximately “from its unsystematic nature?” Yes, the question mark is part of the translation, reflecting one of the endings, -kö. Some people would claim that this word doesn’t count.

To make a multisyllabic story short, the quest continues, and we finally arrive at the following 61-character creation, widely accepted as the longest Finnish word (drum roll, please): lento­kone­suihku­turbiini­moottori­apu­mekaanikko­ali­upseeri­oppilas.

Dear reader, I would love to leave it at that, allowing you to imagine that it means something glorious, artistic and divine relating to famous glass vases on lakeview windowsills in ascetic Northern architecture, but I suppose I’d better take a stab at translating this one, too.

It refers to someone who is an “aeroplane jet turbine motor assistant mechanic, non-commissioned officer, in training.” And that was the length of that story, as they say in Finnish – meaning, of course, “And they lived happily ever after.”

Calling all fans of the Finnish language
Arts & cultureWebpick

Calling all fans of the Finnish language

Hooray for Finnish, with all its grammatical glory and its endless supply of double vowels! April 9 is Finnish Language Day, and also commemorates Mikael Agricola, who is credited with creating the first written Finnish literature.

So you want to learn Finnish? Start here and now!