Close-to-nature Finland has seven natural symbols, including a national fish, a national tree and even a national insect.

Family of national symbols: These four whooper swan cygnets (right) and their parents carry themselves as if they knew about their status as Finland’s national bird.

Many countries have an animal or bird as a national symbol, but close-to-nature Finland has seven natural symbols, including a national fish, a national tree and even a national insect. The country also celebrates Finnish Nature Day every year on the last weekend in August.

Finland’s seven magnificent national nature symbols received their status through a series of public polls that attracted tens of thousands of postal votes in the 1980s and ’90s, before the advent of instant online polls. “The reason we have so many iconic natural symbols may be that nature is very dear to the Finns, as can be seen each summer when our cities empty out as everyone heads off to their rural roots,” explains Terho Poutanen, former publicity officer of the Finnish Association for Nature Conservation. The association organised several of the popular national votes together with scientific, corporate and media partners. “Our seven national nature symbols are interlinked with Finnish mythology, traditions and popular culture in various interesting ways,” he says. Many have been proudly featured on postage stamps, in organisations’ logos and on pre-euro Finnish banknotes and coins. Poutanen explains how the votes also aimed to arouse interest in nature conservation among urbanised modern Finns by giving everyone a sense of connection to certain familiar, charismatic or endangered creatures. 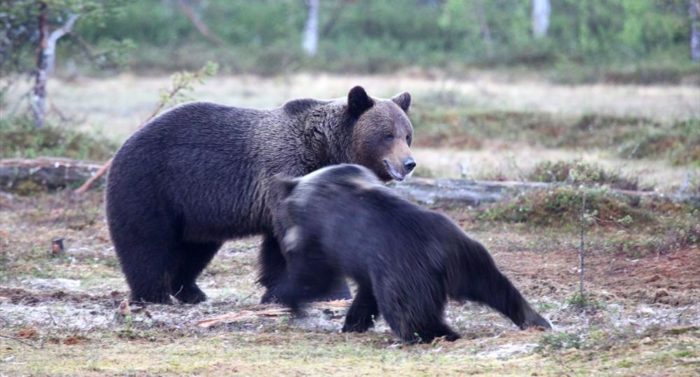 Bears feature prominently in Finnish mythology, including the national folklore epic Kalevala. Ancient Finno-Ugric peoples held bears as feared and honoured totemic animals, and Finns still often consider the bear “King of the Forest.” About 1,500 brown bears (Ursus arctos) roam Finland’s vast forests today, but they are very wary of humans and few Finns ever encounter them in the wild – though in recent years safe and sensitively organised bear-watching trips in the bear country borderlands of eastern Finland have enabled increasing numbers of Finns and foreign visitors to watch these magnificent beasts close up. Other animals that fared well in the public poll included the hunters’ favourite the moose or elk (Alces alces) and the Saimaa ringed seal (Pusa hispida saimensis), an endangered freshwater seal found only in Finland. 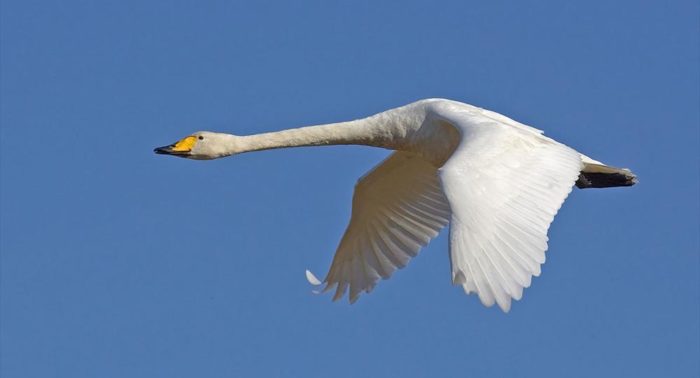 The whooper swan (Cygnus cygnus) is a graceful, northern, pure white, wild swan that features in Finnish folklore and culture, from the Kalevala folk epic to the works of composer Jean Sibelius. During the early 20th century the numbers of whooper swans in the wild declined steeply, until by the 1950s fewer than twenty pairs bred in Finland. The swans have since recovered after being successfully spotlighted as a figurehead species for Finland’s nascent nature conservation movement; and today Finland is home to about 6,000 whoopers. In the springtime the sight and sound of returning flocks of migrating swans brings joy to nature-lovers across the country. Many products in Finland’s stores bear a flying swan logo from a Nordic environmental labelling scheme, or a swimming swan logo signifying food produced in Finland. Finnish euro coins feature a pair of whooper swans in flight over some quintessentially Finnish lakeland scenery. 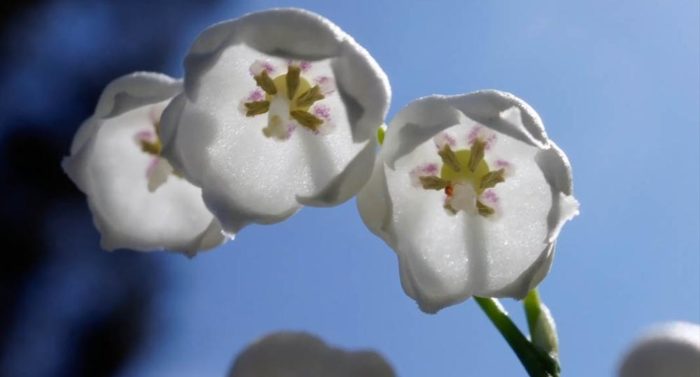 The lily-of-the valley (Convallaria majalis) was chosen as Finland’s national flower because its attractive and sweetly-scented flowers are very familiar to most Finns. These delicate clusters of white blossoms, shaped like tiny bells, bloom in early summer in moist woodlands, parks and gardens in almost all parts of the country. Perennial lily-of-the-valley plants grow so profusely that children and other nature-lovers can be encouraged to pick them while leaving rarer species to grow, though it’s worth remembering that the bright red berries that adorn them in late summer are poisonous. Lilies-of-the-valley have often featured in Finnish romantic poetry and pop songs. Their Finnish name, kielo, is also a traditional girl’s name that for some reason is also often given to amiable cows. 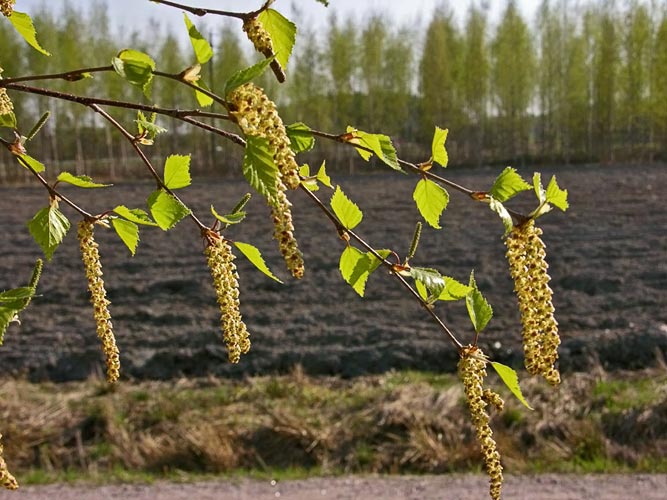 The silver birch (Betula pendula), with its striking white bark, lush green leaves and gracefully drooping branches, is perhaps the most beautiful native tree in Finland’s forests, so it came as no surprise when the winner of the vote to choose the country’s national tree was announced in 1988. Over the ages Finns have traditionally used birch trees in many other ways than for their timber. Their sap makes a healthy mineral-rich drink. Their bark has been used to make anything from roofs to baskets, and even shoes.  And the freshest, leafiest branches of young silver birches make the best possible switches for gentle flagellatory use in therapeutic sauna massages. To mark Midsummer’s Day many Finns stand two silver birch saplings outside the doorway of their home or holiday cabin, continuing an age-old tradition. And countless old Finnish romantic films feature a cliché image of a blonde Finnish maiden leaning winsomely on a birch tree by a picturesque lakeshore. 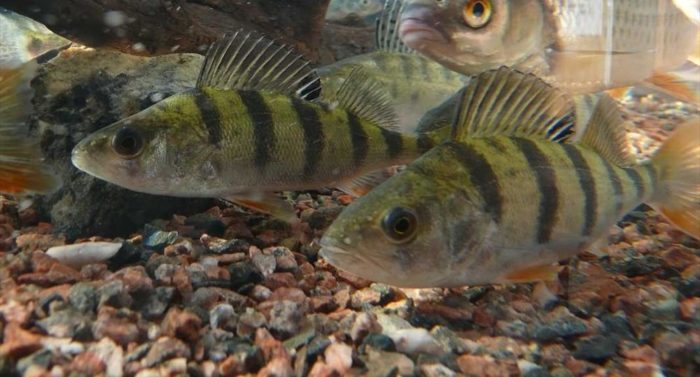 With its dark stripes and bright red fins, the perch (Perca fluviatilis) is by far the most familiar and easily recognised fish found in Finnish waters. Some well-known fish only thrive in saltier marine waters, wild rivers or pristine arctic lakes, but the humble perch abounds in ponds, lakes, rivers and coastal waters all around Finland. These hungry aquatic predators can easily be caught by anyone dangling a hooked worm on a line tied to a fishing rod or the end of a branch. But they are also widely trawled and traded by Finnish commercial fishermen. Fresh perch can be seen in shops and markets around Finland. Fried, grilled or baked perch makes a tasty meal, and traditional dishes such as perch soup or rye loaf stuffed with perch are popular in many rural regions. 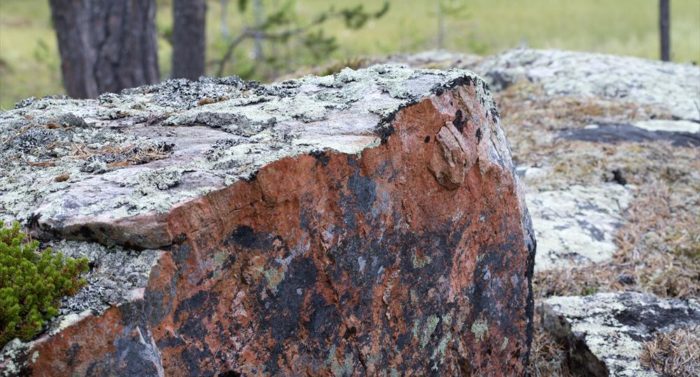 Granite was chosen as Finland’s national rock type in a postal poll run by the Finnish Science Centre Heureka and a geological institute in 1989. Outcrops of ancient pinkish or greyish granitic bedrock two billion years old or more can be seen in almost all regions of Finland. Attractive and durable granite can also be widely seen in Finland’s cities and towns in monuments, sculptures and prominent buildings. Well-known granite buildings in Helsinki include Parliament House, the National Museum, the Central Railway Station, the National Theatre, Granite House shopping mall, and the atmospheric Temppeliaiukio Church, which is sunk into the granite bedrock that underlies the capital. Most Finns also end their days under a traditional granite gravestone. 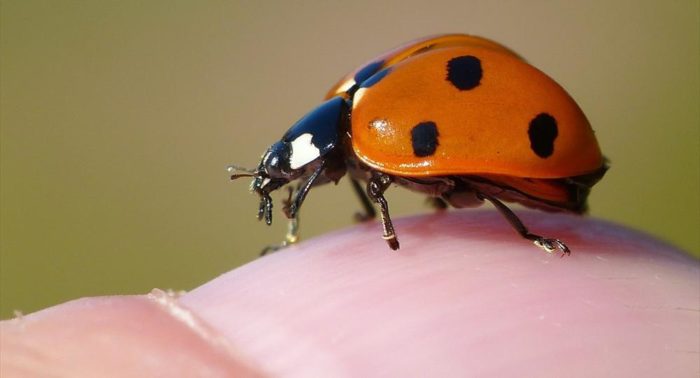 The seven-spot ladybird (Coccinella septempunctata) was chosen as Finland’s iconic insect in 1996 through a poll publicised by a popular magazine for animal-lovers. It is an ideal choice for encouraging an interest in creepy-crawly creatures, as an easily sighted, beautifully decorated bug that does not bite or sting, but can be safely picked up and observed. Behind its choice undoubtedly lies a children’s rhyme loved by generations of Finnish kids: “Fly, fly, Ladybird, to the foot of the big stone, / There your mummy and daddy are making porridge for you.” Colourful ladybirds also feature in a logo that appears on wildlife-friendly Finnish organic produce.

If you go down to the Finnish woods today
Life & societySlideshows

If you go down to the Finnish woods today

In early summer in the forests of the Kainuu region love is in the air – for bears.