Finland’s system of benefits helps parents spend more time with their kids during their formative first months and years. This family is on an outing in the central western Finnish city of Tampere.

Finnish people tend to take Mother’s Day and Father’s Day pretty seriously. Or rather, they tend to take celebrating them rather seriously. They’re holidays for the whole family, even though they’re named after the parents.

Most Finnish families with kids – and many families whose children have already grown up – clear their schedules so they can do something special on Mother’s Day (the second Sunday in May in Finland) and Father’s Day (the second Sunday in November). If you contact a friend to suggest a get-together on one of those days, they may tell you that it’s not possible. The implication is that you really ought to have known. 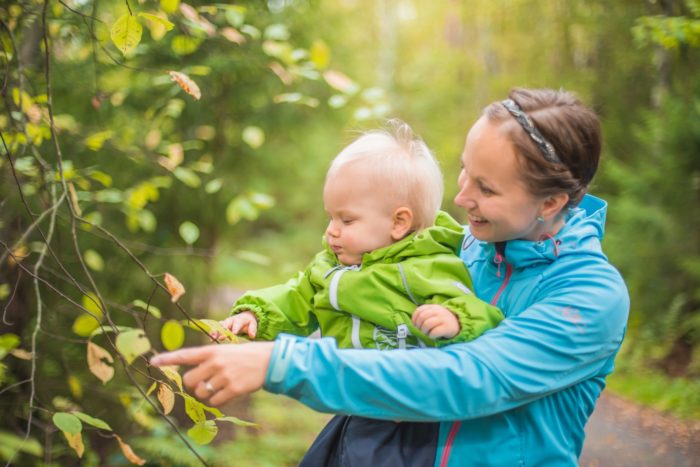 A mother and a child explore the Maatialanharju Nature Trail in the town of Nokia (yes, that Nokia), near Tampere.Photo: Laura Vanzo/Visit Tampere

Finnish society’s attitudes towards families are visible on other days of the year, as well.

Anu Partanen is a Finnish journalist who has lived in New York, where she spent a decade before moving back to Finland with her American husband and their child. In her book The Nordic Theory of Everything, she examines many aspects of living in the US and the Nordic countries, including healthcare, work-life balance, education and raising a family.

She touches upon aspects of Nordic society that also help explain the way Finland regards parents and families. In a chapter called “Family Values for Real: Strong Individuals Form a Beautiful Team,” Partanen mentions the many benefits parents of young children receive in the Nordic countries. In Finland, they include generous amounts of parental leave with an allowance, very affordable daycare and a maternity package (famously nicknamed the “baby box”) full of clothing and other items parents need for their new baby.

Partanen points out that such benefits grant parents and families more independence. While raising a family is never simple, parental leave and the availability of daycare give parents more flexibility to arrange their lives, families and careers in a manageable, fulfilling way. Perhaps most importantly, they can spend additional time with the kids during their formative first months and years without taking an unbearable economic hit or falling off the career ladder.

The benefits aren’t free – Finnish people often mention that they have paid for them in the form of taxes (in another article, ThisisFINLAND asks if taxes make Finnish people happy). And the system has changed over time, with the next update set for August 2022, bringing additional months of parental leave; terminology that is more gender-neutral; and increased inclusivity for various family constellations – more about that later.

We talked to several parents of small children to get a sense of how families in Finland organise their parental leave and how such benefits make a difference in their lives. (We’re using “parental leave” to cover various categories. More info appears in the box at the end of the article.)

Ann-Mari and Jaakko, a Helsinki couple in their late 30s, have a boy who is more than two years old at the time of writing. “Pretty early on, when I was still pregnant, we discussed things, and Jaakko said that he wanted to share the parental leave,” recalls Ann-Mari.

Maternity leave begins a month or more before the due date, and after their son was born, both parents were on leave for the first two weeks. “It was really nice that we were able to share that wondrous time together for a couple weeks,” says Jaakko, who works in architectural restoration.

After that, Ann-Mari stayed home for nearly nine months before they switched places, with Jaakko taking care of their son and Ann-Mari going back to her job in publishing. “The thinking was that the child would get used to having both parents around,” Jaakko says.

When his parental leave was over, he chose to work six hours a day for several months. This option, available to families with children less than three years old, is known as flexible care. It gave Jaakko the leeway to help their son transition to attending daycare a month after his first birthday.

Through all this, their employers were accommodating – they’re required by law to grant the time off without repercussions to employees’ career status. The children benefit, and therefore so do their families and the whole society. 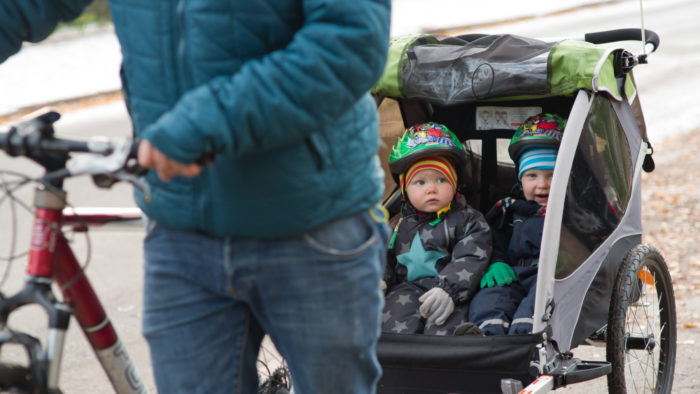 Aseidas, a transplanted American and the father of two-year-old twin boys, is married to a Finn and works for a Finnish company as a technical architect. He got no parental leave from the Finnish system, since he moved to Finland only shortly before the kids were born and therefore didn’t qualify. Luckily, the international company he was working for at the time granted him three months of leave.

“Having twins is a bit more challenging,” he says, clearly understating the case, as the boys merrily spill food on the floor in the background. “Both parents kind of needed to be off from work at the same time.”

The family receives a child allowance (approximately 100 euros per month per child under 17), as all Finnish families do, and the twins have been attending daycare just up the block since they were 18 months old. Aseidas’s wife took parental leave, which was ten weeks longer for families with twins. After more than a year away, she returned to her job at a nongovernmental organisation.

Later, he was able to take a flexible care period and work 80-percent weeks for four months. He intends to do so again for six months when the kids turn two and a half. “The system in Finland kind of takes care of you and the kids, and makes sure that you have at least the minimum that you need,” he says. 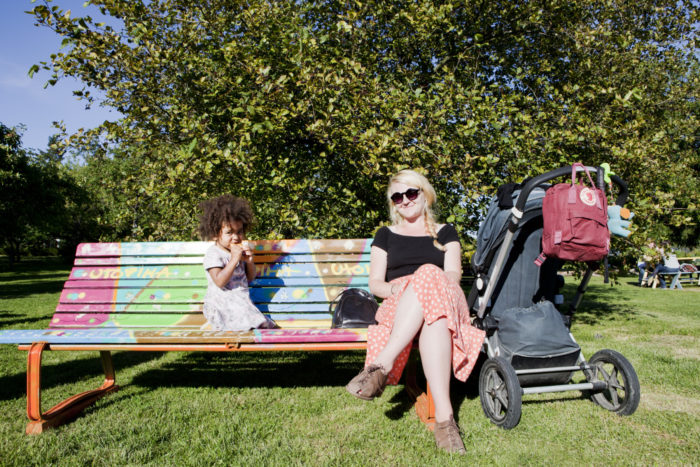 Virpi and Aki have a two-year-old daughter and live in a Helsinki neighbourhood about ten kilometres (six miles) from the city centre. Both work in healthcare-related professions. “When our child was born, I happened to be temporarily unemployed,” says Aki. “So I was at home for a month, and then I returned to work, but I took parental leave later.”

Virpi was on leave for nine months, and when she returned to work, Aki took a couple months of leave. When that was over, he stayed home with their daughter for several more months, during which he received a small allowance for child homecare.

Several practical considerations made it more logical for Aki to stay home during this phase: Virpi was completing graduate-school studies that were partly integrated with her job, and her salary was also greater than Aki’s.

When their daughter reached 18 months, she started going to daycare. At that time, Virpi and Aki both worked 80-percent weeks for three months, in order to make the family’s transition to the daycare routine smoother. 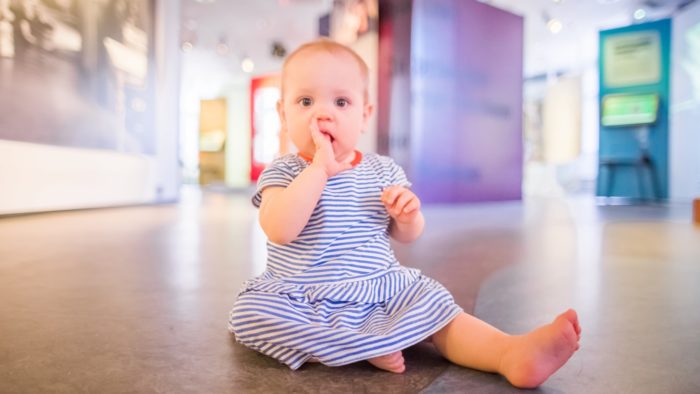 It’s never to early to get your kids interested in reading, but we’re not sure if this one knows they are in Tampere’s Museum of Finnish Literature.Photo: Laura Vanzo/Visit Tampere

Over the decades, Finland’s system of benefits has changed with the times, allowing fathers to take an increasing proportion of the parental leave. Another significant reform is set for August 2022 (see box below and video above).

It increases the amount of leave and revises the terminology, using the term “parental” instead of “maternity” and “paternity.” It also equalises the time allocated to each parent. These changes encourage equality and inclusivity for all parents, regardless of gender, and keep up with developments in how people perceive and define a family.

But what about Mother’s Day and Father’s Day, which are important days for Finnish families? Are they truly equal?

Let’s look at outside factors that might influence your reply. Here are the stats: On Mother’s Day, in May, Helsinki typically receives more than 16 hours of daylight, and the average high temperature for that month is 14 degrees Celsius (57 Fahrenheit). Meanwhile Father’s Day, in November, usually receives just above seven hours of daylight, with an average high of only four degrees Celsius (39 Fahrenheit).

You can make your own decision on this one, but we believe we may have found one aspect of being a parent that no amount of benefits can affect.