Eighty years promoting a good start for every child in Finland

Finland’s maternity package for all expecting mothers has a history that goes back to 1938. We look at this life-changing Finnish social innovation and see what’s new in its 80th-anniversary edition.

New items in the 2018 maternity package include a lion bowl made out of bamboo and a pair of blue and white felt boots decorated with an “80” in recognition of the maternity-package tradition’s 80th anniversary.

Every spring there’s a bit of a commotion when Finland’s Social Insurance Institution (commonly called by its Finnish abbreviation, Kela) unveils its newest maternity package.

People await the announcement of new items, colours and designs with much interest – after all, the maternity package helps determine what tens of thousands of babies across the country will be wearing.

Luca and Eetu, two boys of about five months old at the time of writing, were brought to a press conference to model some of the new clothes. They were unperturbed by the attention.

This unboxing video shows items from the 2017 version of the maternity package, which is updated annually based on feedback from parents and according to changing trends.
Video: Finland’s Social Insurance Institution (Kela)

There’s more to the maternity package than fashion statements, though. Every new mother in Finland has the right to this box of baby clothes, care items and accessories to give every child a good start and help parents grow into their new role. The system originated in 1938, when the government introduced a maternity grant with a monetary value, to help address concerns about infant mortality and declining birthrates.

Then, as now, expecting mothers had to attend a prenatal clinic in order to qualify to receive the incentive, and the medical and educational value of these visits remains closely associated with the maternity package concept. Finland has one of the lowest rates of infant mortality – and of maternal mortality – in the world. 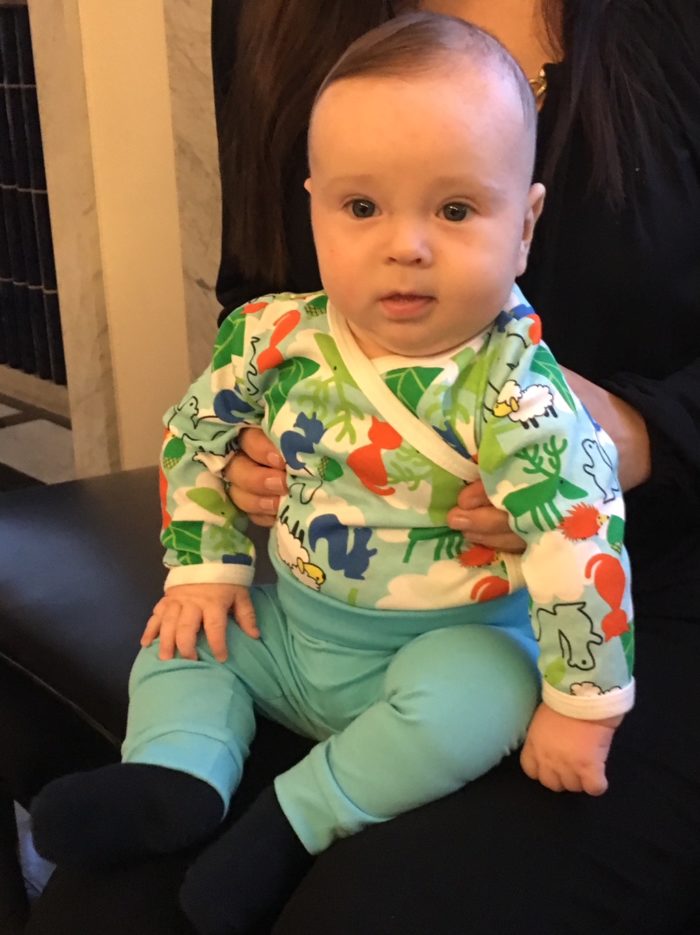 Kela modifies and updates the maternity package annually based on feedback from parents and according to changing trends. For the 2018 version, additions included a pair of wool trousers and a pair of blue and white felt boots. The latter are decorated with an “80” in recognition of the maternity-package tradition’s 80th anniversary.

Standard items include a snowsuit, mittens, various hats and a blanket that can be zipped up to form a sleeping bag. The selection of winter gear in the box shows that Finns get used to spending time outdoors in the fresh air at an early age, no matter what the temperature is.

The fabric colours and patterns, and even the illustrations that cover the box, change from year to year, but they’re designed to be gender neutral. Every family gets the same assortment. In 2018, the sleeping bag features pointillism-inspired sheep on a blue-green background; in 2017, blue, pink and yellow owls stood on a grey background; and the 2016 version showed a blue-and-green pattern of bears, berries and conifer trees.

In addition to the wide variety of apparel – not all of it is winter clothing – the maternity package also contains useful items such as nail scissors, baby’s first toothbrush, a hairbrush and a bath thermometer. A foam mattress covers the bottom of the box, so that the box itself can serve as a safe, clean crib for the new baby.

Emphasis on environmental sustainability has increased over time, in large part thanks to customer comments. For example, in 2009 Kela stopped including disposable nappies (diapers), which take hundreds of years to decompose and contain harmful chemicals. 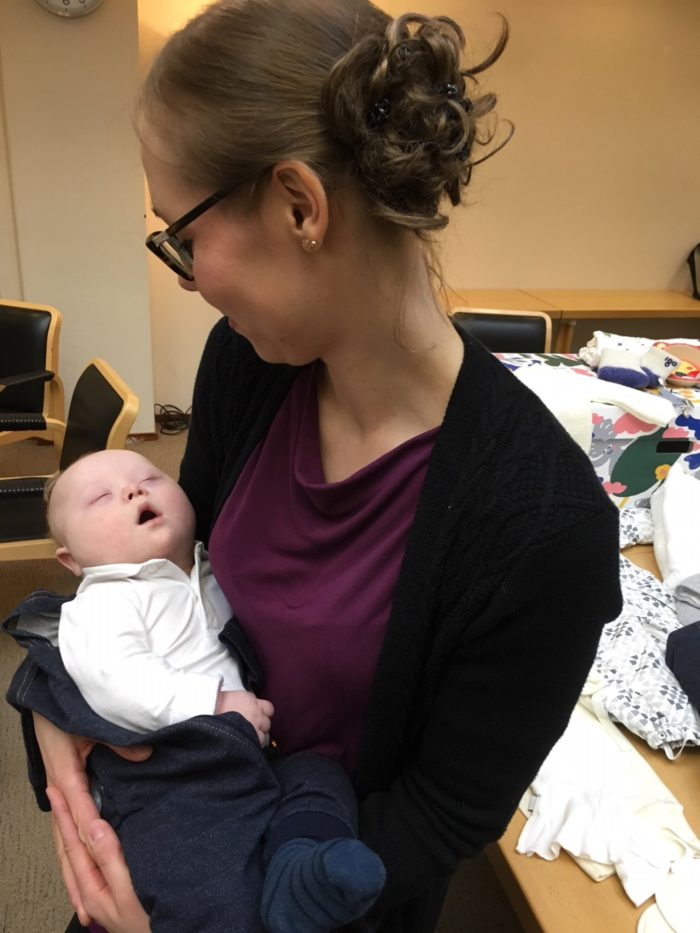 Being a model is hard work: Eetu fell asleep in his mother’s arms before he could actively show off the range of motion in the cotton “jean” overalls included in Finland’s new maternity package.Photo: Pauliina Pennanen

Kela frequently receives inquiries from other countries that are considering introducing similar programmes. Scotland, Argentina and the US state of New Jersey are experimenting with maternity packages of their own. Kela provides background info about its own programme, but does not make specific recommendations about the contents of the boxes, since local climate and cultural factors affect the choices of what to include.

Other governments that introduce maternity packages have priorities that are similar to those of the Finnish programme. The main point is to give all children an equal start in life, so the package is designed with their needs in mind.

The parents-to-be receive a material benefit, but also gain a critical knowledge boost by coming into early contact with healthcare professionals at a time when there’s a lot to learn. When you unpack the whole idea, it represents a benefit to all of society.

Keeping good company at the top: Finland number one in World Happiness Report

We’re jumping for joy, because Finland is officially the happiest country on the planet.