Finns pay high taxes but get a lot in return for their money. Families with children are especially well taken care of by society, and their lives are made easier by the many types of support and benefits available.

Let’s meet the Tuurala family from Helsinki and see how they benefit from society’s support for families with children. Clicking on the underlined words will bring up more information about the forms of support available in Finland.

Kati and Klaus Tuurala and their daughters Freja and Iiris (6 and 4 years old at the original time of publication) live close to the centre of Helsinki in Ruoholahti. They lead an active life and earn an average income.

Kati, 36, works full-time and her husband Klaus, 61, is retired. His last position was at telecoms company Sonera as a usability expert. He has used his retirement to return to studying at the University of Helsinki. The couple’s daughters are in municipal family daycare and Freja also attends preschool. But before going into greater detail, let us turn back the clock six years to when Kati and Klaus were about to become parents.

When Kati discovered she was pregnant, she did what all mothers-to-be do in Finland. She got in touch with the prenatal clinic in her own area. There she was assigned a midwife whose clinics she attended at least once a month during the pregnancy for check-ups and observation.

Kati was allowed to choose in which of the three local area hospitals that were part of the Hospital District of Helsinki and Uusimaa she would like to give birth. She chose the Kätilöopisto Maternity Hospital because of the homely Haikaranpesä (Stork’s nest) ward, which is especially for women wishing to have a natural, active birth. As prospective parents in the ‘Stork’s nest ward’, Kati and Klaus went and had a look at the maternity unit and met the staff in advance. 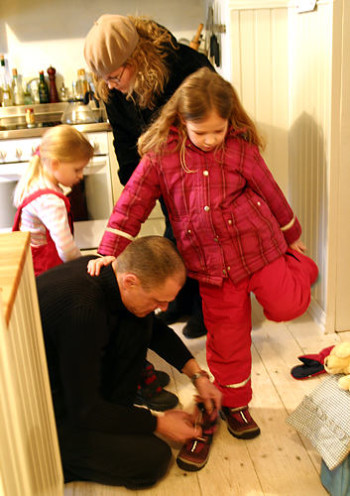 The couple discussed the birthing plan with the midwife, and familiarized themselves with the equipment and methods used to ease the birth and relieve pain. They also took part in antenatal classes held at the Stork’s nest with other expecting couples. Prospective fathers had their own discussion group. The birth went well, and the couple were left with pleasant memories of the event.

Klaus was present at the birth, and the whole family spent the night at the hospital in their own room. The midwife assigned to them for the birth visited them at home during the baby’s first weeks to check on progress and to teach the parents how the baby should be carried in a baby sling. The Tuuralas had everything ready for the baby on her arrival home, including little vests and suits in the cupboard together with the babycare equipment. Some of the baby gear they had bought themselves, while some they had received in the maternity package supplied by the state.

Kati went on maternity leave from Akava, her employer at the time, 5 weeks before the due date. Klaus took three weeks paternity leave when the child was born. When baby Freja was about four months old, Kati continued to look after her on parental leave and for some months after that on care leave. A daily allowance paid by the Social Insurance Institution (commonly known by its Finnish abbreviation, Kela) guaranteed the family income during these periods of leave.

Since the birth of Freja, the state has been paying child allowance directly into the parents’ bank account. This allowance will continue until the child reaches 17 years of age.

Kati returned to work when Freja was 16 months old. She taught as a part-time teacher while finishing her teacher-training studies at the same time. The Tuuralas applied for a municipal family daycare place for Freja and their request was successful. Freja was looked after near home by a friendly lady called Riitta. The family’s second child, Iiris, was born when Freja was 2 years and four months old. The birth and benefits for the child were as before, with the exception that instead of the maternity pack the Tuuralas opted for the maternity grant and a higher rate of child allowance was paid for the second child. 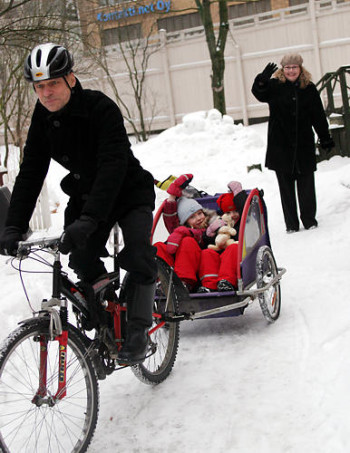 Kati went to work for the publishing company WSOY a year after Iiris’s birth, and Iiris was able to go to the same family daycare as Freja, which both girls are still attending. Freja, who starts school next autumn, attends a preschool class at a nearby daycare centre in the mornings, and in the afternoon is in Riitta’s care. If one of the children falls ill she cannot go to daycare but must remain at home. In a situation like this, one of the parents has the right by law to stay at home to look after the sick child. If she so wished, Kati’s former employer, WSOY, would also pay for a carer for the sick child for the days when Kati had to be at work. Now that Klaus has retired he looks after the children at home when they are sick.

Fortunately, the Tuuralas’ children have been healthy. Since their birth, the children have attended their local child welfare clinic to be examined by a doctor or nurse at least once a month during their first year and after that at least once a year. The children’s growth and development is checked at the clinic and they receive vaccinations in accordance with the national vaccination programme. The children’s teeth are also checked at the clinic’s dental surgery once a year.

If they become unwell and need to see a doctor, they will be seen on the same day in the emergency medical clinic of their local health centre or at the city’s emergency clinic for children. If they have symptoms requiring further examination or treatment by a specialist, they will be referred to the children’s hospitals in the Helsinki and Uusimaa Hospital District. All services provided by child welfare clinics, dental clinics and health centres are free for children.

The Tuuralas’ home is cosy, but not very large; many families with children face the same situation since living costs in Finland, and Helsinki in particular, are relatively high. The government alleviates this problem by allowing a tax deduction for interest on owner-occupied housing.

Families with children are never short of housework. The Tuuralas get some respite thanks to their home help, Leena, who comes to clean their home once a fortnight. The Tuuralas can offset the wage and social costs they pay on her behalf against their own tax as a domestic help credit. When they modernised their kitchen a few years ago, they were also able to deduct the labour costs of the builder and plumber from their taxes.

When their daughters were small, they attended infant swimming lessons with their parents and mother and toddler exercise classes. Nowadays, Klaus takes Freja to the fairytale gym every week and while she is there he takes Iiris to choose books to take home from a special children’s library. The children’s pastimes do not cost much because the facilities are provided by civic organizations that receive financial assistance. The girls spend some time every week in the local children’s play park, which has outdoor playground equipment provided by the local authority and is supervised during the daytime.

Does reading this leave you breathless? Perhaps it’s no surprise that there are dozens more forms of social support and services for families with children in Finland that could be described, but we included the most important ones here.

Effective family policies have achieved at least two things: Finland has for a long time had one of the lowest infant mortality rates in the world, and mothers have a significantly better chance of being active in working life than in many other EU countries.

Why not join Freja and Iiris? Put your ice skates on and head for the rink in your local park — which the council workmen have just iced over to the great delight of the local youngsters.