Finnish people pay a sales tax of 14 percent on most groceries.

Politicians in other countries, across the ideological spectrum, present Finland and the other Nordic countries as shining examples of either what to do or what not to do.

Such politicians have been known to mention taxes. The audiences listening to those speeches have probably not had the chance to visit Finland or talk to a real Finnish person about taxation.

The numbers are a good place to start. Let’s say that a 30-year-old Helsinki resident – we’ll call her Annika – earns a fairly typical monthly salary of 3,000 euros. She pays 17 percent of that in income tax, 7.15 percent towards the pension system and 1.25 percent towards unemployment insurance. This leaves her 2,238 euros in hand. [Finland’s Tax Administration reviewed these figures at the time of writing. You can find links to our data sources at the end of the article.]

It’s a progressive system, so your income level determines your tax rate. If Annika made 66 percent more – 5,000 euros a month – her income tax would rise 8.5 percentage points to 25.5 percent. Other factors, such as your home municipality or your commuting expenses, may affect your tax rate or entitle you to deductions. 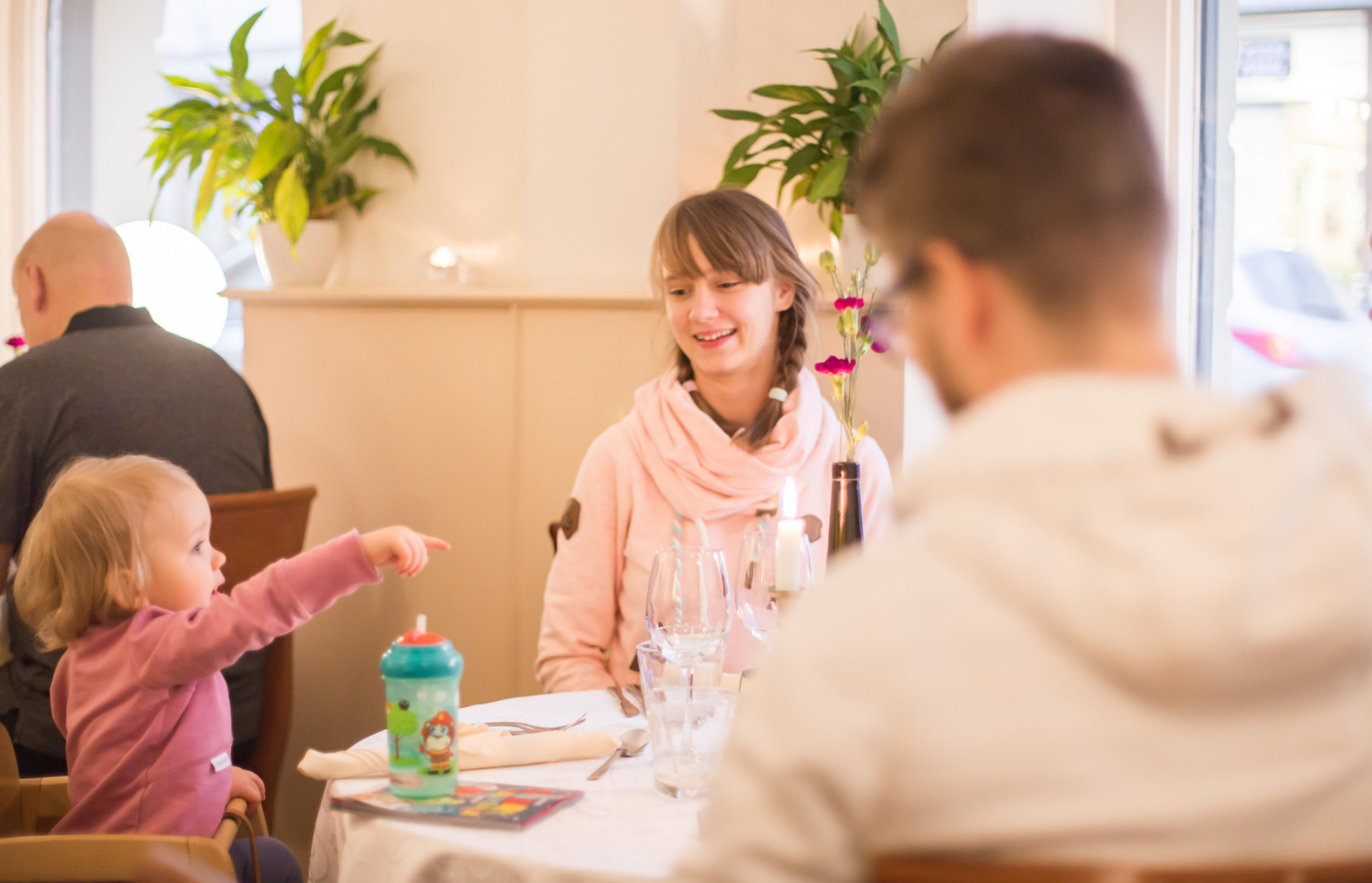 A family visits a restaurant in the Finnish city of Tampere; the bill will include a 14 percent sales tax.Photo: Laura Vanzo/Visit Tampere

Annika’s employer also pays some 600 euros in social insurance contributions on her salary of 3,000 euros a month, including contributions to the pension system, the healthcare system and the unemployment insurance system, as well as job-specific accident insurance.

A sales tax, or value-added tax (VAT), of 10, 14 or 24 percent is included in the price of many of the things Annika buys. In this way, she supplies her share of Finland’s total tax revenue, which reached about 70 billion euros in 2019 (Finland has a population of 5.5 million).

How do Annika and other Finns feel about all this?

Don’t assume Finnish people are thrilled about paying taxes – they are human, after all – but very often they will philosophically point your attention to the wide array of public services that taxation makes possible.

Healthcare, for example, covers everyone and is ranked among the best and most egalitarian in the world by the Global Burden of Disease study. In 2017, healthcare cost the Finnish government 20.6 billion euros and the annual cost per capita was 3,742 euros. (At the time of writing, that is the most recent year for which the Finnish Institute for Health and Welfare has released an official report.) By comparison, the UK spent the equivalent of 3,366 euros per capita that year, while Japan spent 3,486 euros, Canada 4,136 euros, Germany 4,459 euros, Sweden 5,096 euros and the US 8,519 euros.

Taxes also support all levels of education, benefits for people who become unemployed or have disabilities, and a wide array of cultural institutions, from the opera and the ballet to the library system. Finland spent about 58 euros per inhabitant on libraries alone in 2018. 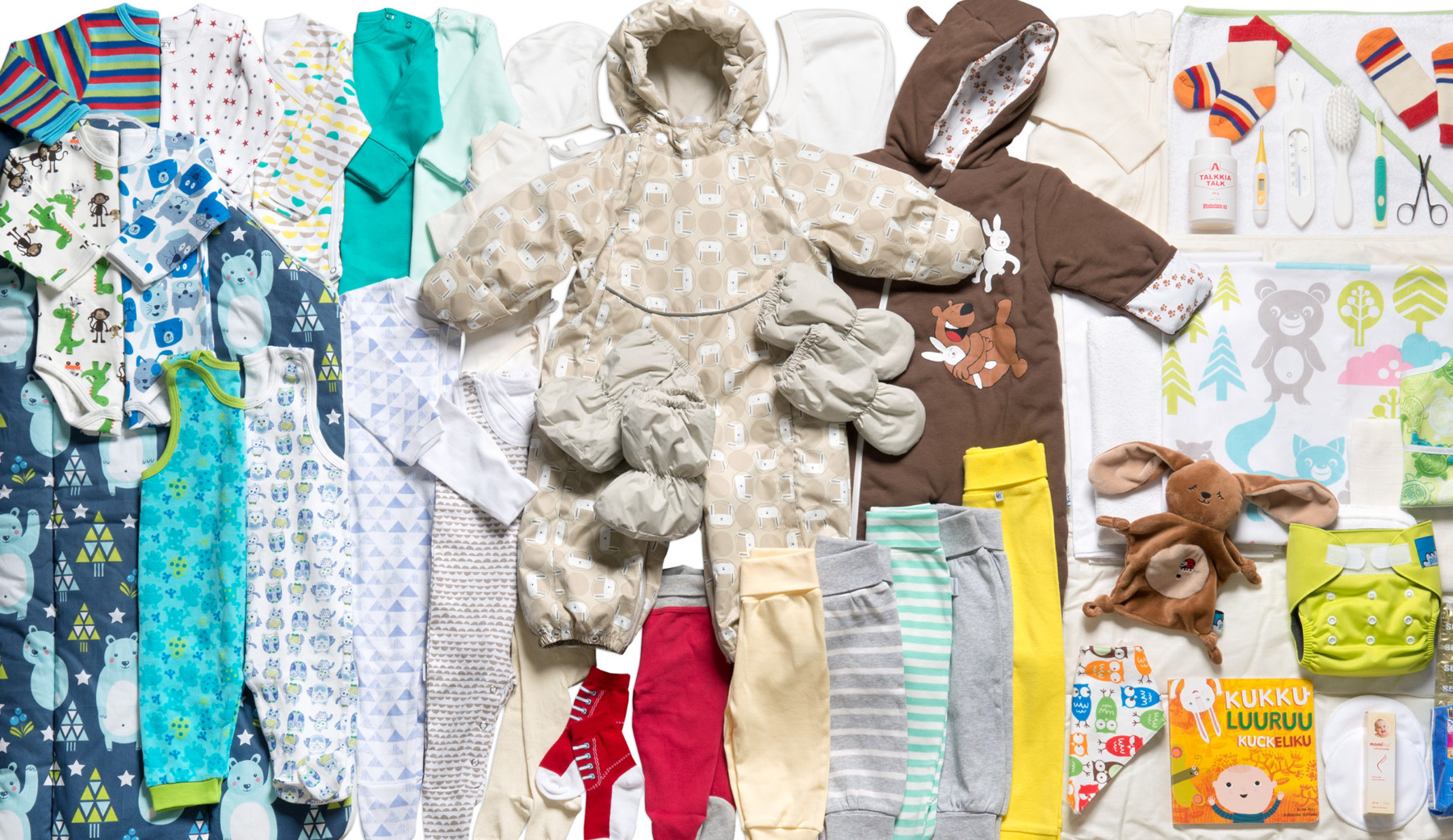 The maternity package, available to all expecting mothers in Finland, is a box containing items parents need for their new baby: bedding, tiny nail scissors, and miniature clothing for all kinds of temperatures, including subzero outings during winter.Photo: Annika Söderblom/Kela

You could also regard the Finnish system as a nationwide insurance policy that kicks into hyperdrive during life’s most vulnerable periods. Childbirth and childrearing are in sharp focus.

If she decides to start a family, Annika will visit a maternity clinic regularly all through her pregnancy, usually 12 to 15 times in total, at no charge. The first maternity clinics were founded in 1922, and the system was enshrined in national law in the 1940s.

After the baby is born, the family visits a child health clinic (usually at the same place as the maternity clinic) at scheduled intervals to check on the child’s health and growth – eight times during the first year, four times each during the second and third years, and then once a year until the child starts school.

Comprehensive coverage for mothers and babies is a major factor in Finland’s low infant mortality statistics. In 2018 the rate was 2.1 deaths (of children less than one year old) per 1,000 live births.

All expecting mothers receive a maternity package in good time before the due date. It’s a large box containing numerous items the family will need to help start its new daily routine with a baby, such as bedding, tiny nail scissors, and miniature clothing for all kinds of temperatures, including subzero outings during winter. 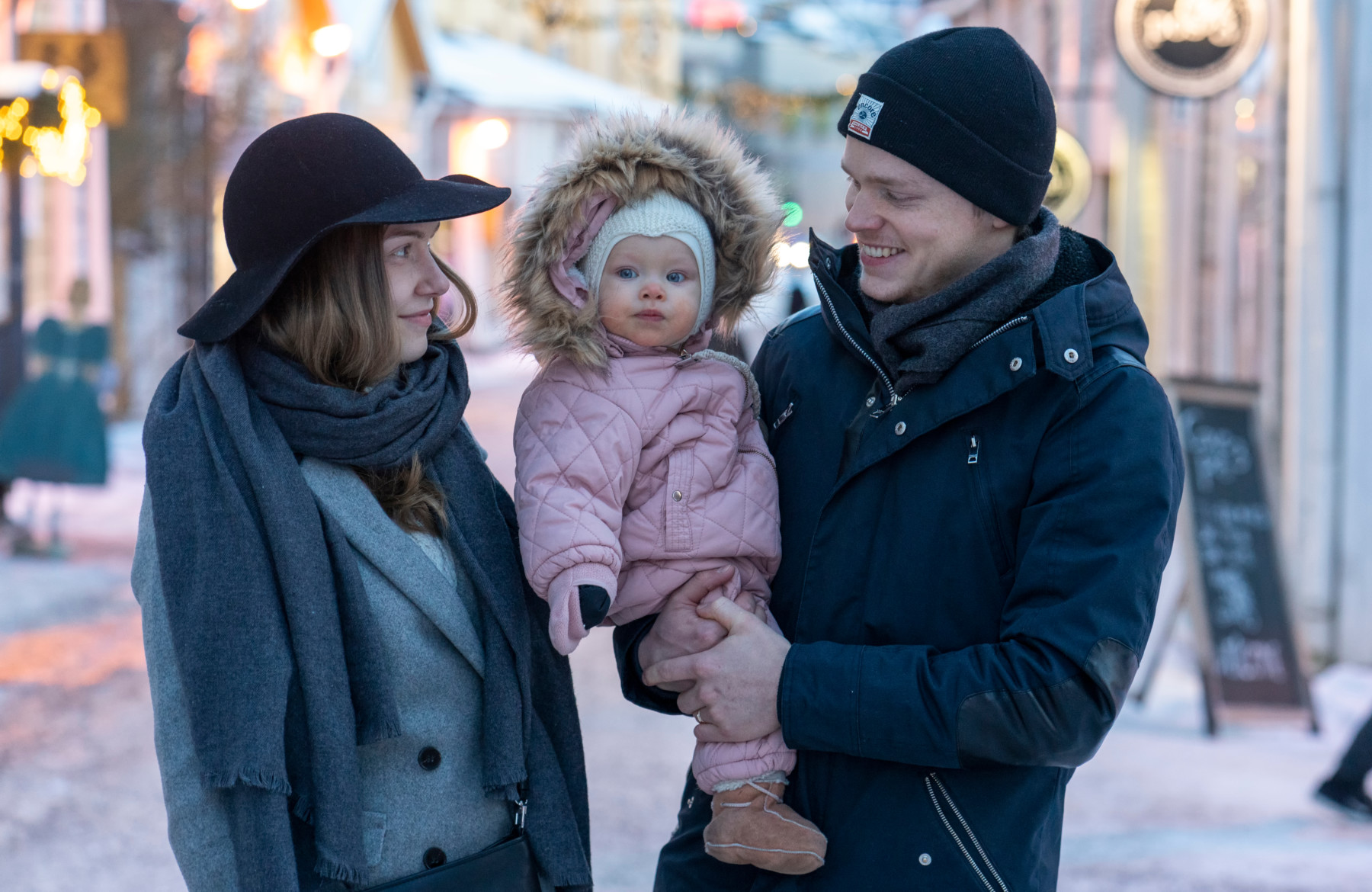 Many Finnish people, such as the family shown here, “appreciate what they get from society and acknowledge that taxes are the way to fund that society,” says scholar Frank Martela.Photo: Pasi Markkanen/Finland Image Bank

As strange as it might sound, taxes may form part of the reason that Finland ranked number one in the World Happiness Report in 2018 and 2019. The index defines happiness in terms of general life satisfaction, which is affected by security and social cohesion.

Frank Martela is an expert on wellbeing research at Aalto University. “I would say that Finns are actually quite happy taxpayers,” he tells me.

According to a survey commissioned by the Tax Administration in 2019, fully 80 percent of Finns are happy to pay their taxes, 96 percent believe paying taxes is an important civic duty and 98 percent believe taxes are important for maintaining Finland’s welfare state.

“Finns appreciate what they get from society and acknowledge that taxes are the way to fund that society,” says Martela. “Accordingly, most people are surprisingly happy to pay taxes.” He adds, “Taxes, instead of being a source of frustration, can be a source of pride for many.”

Only 31 percent of survey respondents said they were frustrated with the amount of taxes they had to pay. In a similar survey of corporate taxpayers, 86 percent said their companies had a positive attitude towards taxation, and 95 percent believed that “doing the right thing is worth it.” 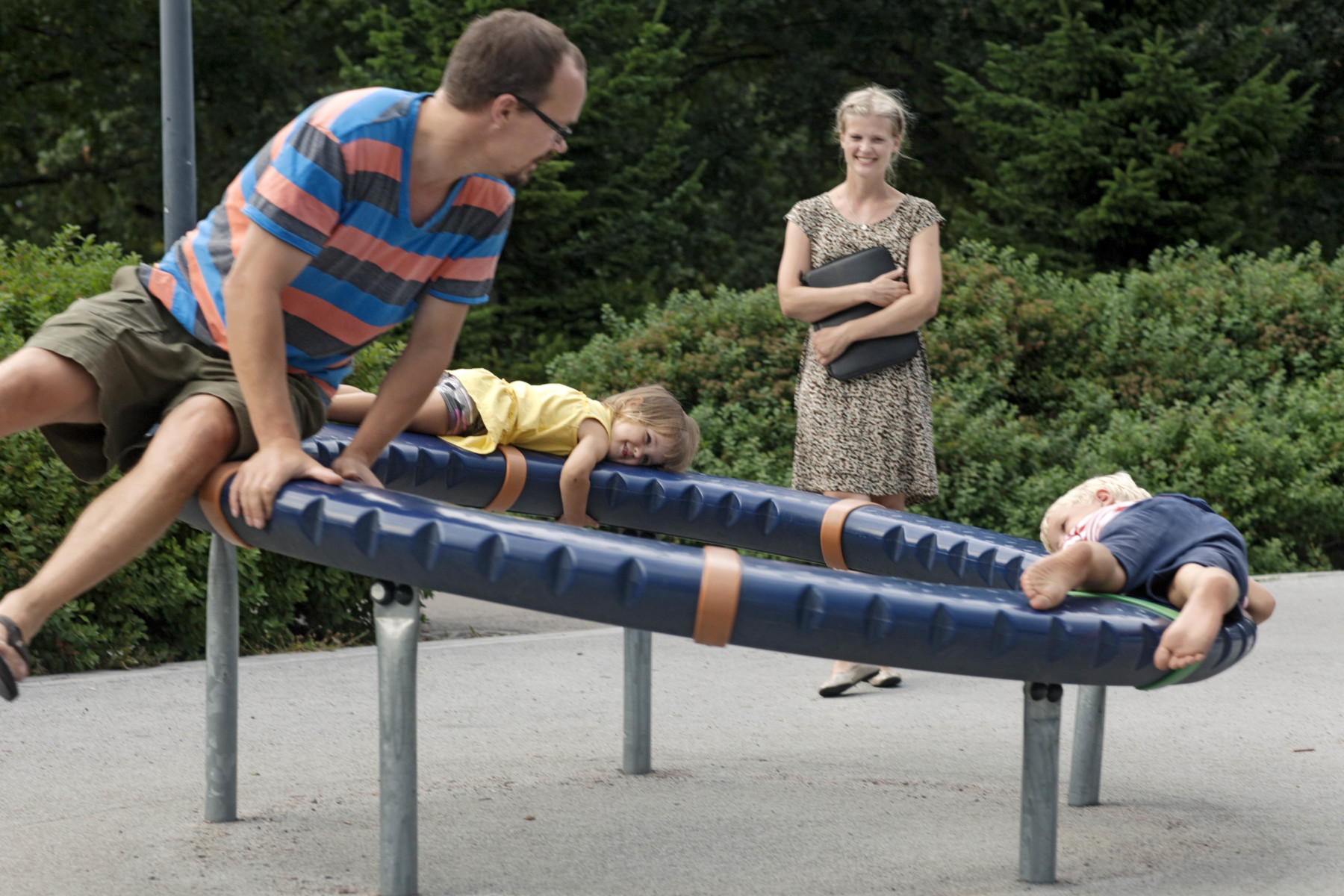 Mothers and fathers alike get paid parental leave; this is one factor that encourages both parents to share the joys and responsibilities of child rearing.Photo: Jukka Rapo/Keksi/Finland Image Bank

Even the logistics of paying your taxes in are less frustrating in Finland than in many countries. In the spring you receive a precompleted tax return – if you agree with it and have nothing to add, then you’re already done. You don’t have to mail or submit anything else. If you do have to modify something, you can do it conveniently online.

Every four years, Finland goes to the polls to elect a new parliament, and one of the issues voters always have in mind is the relationship between taxes and public services. Regardless of the government’s agenda, it works within a Nordic tradition of egalitarianism and highly organised pragmatism, which means the appetite for many of these public services will continue in the future as well.

Back to Annika and her family: At the hospital after the birth, Annika, her partner and their baby will enjoy nearly hotel-like conditions. Mothers and fathers alike enjoy paid parental leave; certain amounts of time are reserved for the mother or the father, while either parent may use the remainder.

She’ll have the option of staying at home with her child, while receiving a stipend, until the baby is three years old. Alternatively, the baby’s father can be the one who stays home for much of that time. If Annika’s relationship ever comes under stress, counselling is available for her and her partner.

Looking after each other 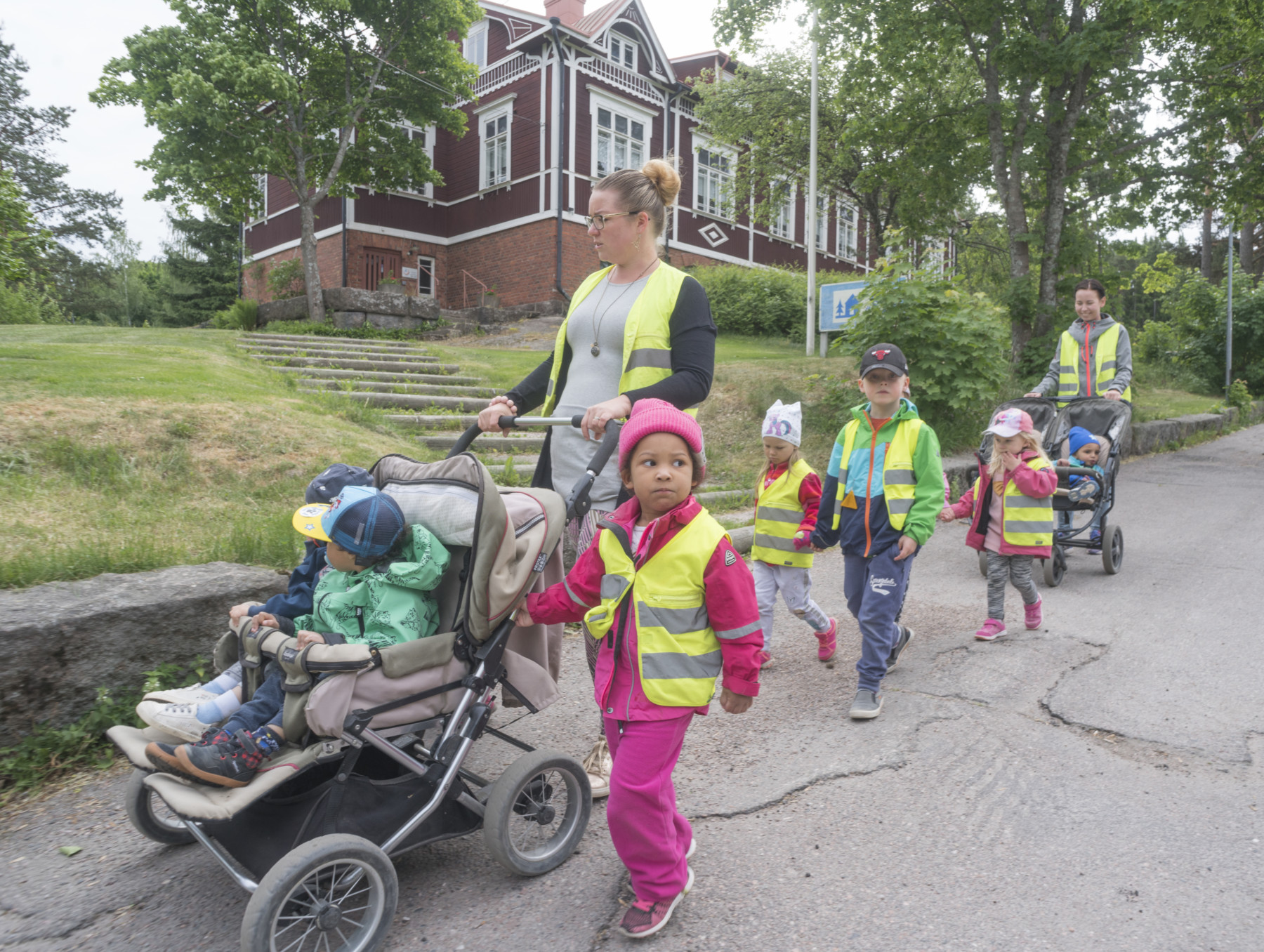 Very affordable daycare allows parents in Finland flexibility when trying to balance family life and their careers; these kids are returning from an outing in the forest.Photo: Pasi Markkanen/Finland Image Bank

Later, the child will attend daycare and then school; both provide home-style meals. School is free; for daycare, parents pay a very modest monthly fee calibrated to the family’s income level and number of kids in daycare. (For example, at the time of writing the maximum monthly fee in Helsinki, for families in the highest income bracket, is 289 euros for the youngest child and 145 euros for the next-youngest child. For families in the lowest income bracket, daycare is free of charge.)

Finnish schools are a point of national pride and mirror the country’s ethos: classes are mixed-level, which means higher-achieving students will help struggling students along, rather than being separated. This increases equality in learning.

Universities and other educational institutions, such as technical schools, are also free-of-charge, and students receive a monthly living allowance. If Annika wishes to change careers later in life, there is support and education to allow her such flexibility.

By the same token, Annika also knows that by paying her taxes she’s helping take care of others; everyone benefits when a society looks after all of its citizens.

These mechanisms are visible in everyday life, so taxes take on tangible meaning – no matter what your opinion of them.