Finnish star Teemu Pukki (10) takes a shot against Italy in a Euro qualifying match in September 2019.

The Finnish men’s national football team play their opening game of the European Championship 2020 tournament against Denmark in Copenhagen on June 12, 2021. That was an easy sentence to write, but many Finnish soccer fans might still be pinching themselves when they read it.

This is the men’s team’s first appearance in any major international tournament, ever, and for the fans it’s the culmination of decades of hopes and expectations.

Delayed by a year because of the pandemic, the Euros tournament was originally scheduled to take place in 2020 across 13 European cities in celebration of the event’s 60th anniversary – the first time it’s been planned for more than two host countries. All but two of those venues – Dublin and Bilbao – are still on the schedule. London’s Wembley Stadium hosts the semifinals and, on July 11, the final. The organisers, UEFA, are confident that at least nine of the host stadiums will be able to welcome spectators to varying degrees – a relief when one considers that most matches across the continent have had to be played with no spectators over the Covid pandemic period. 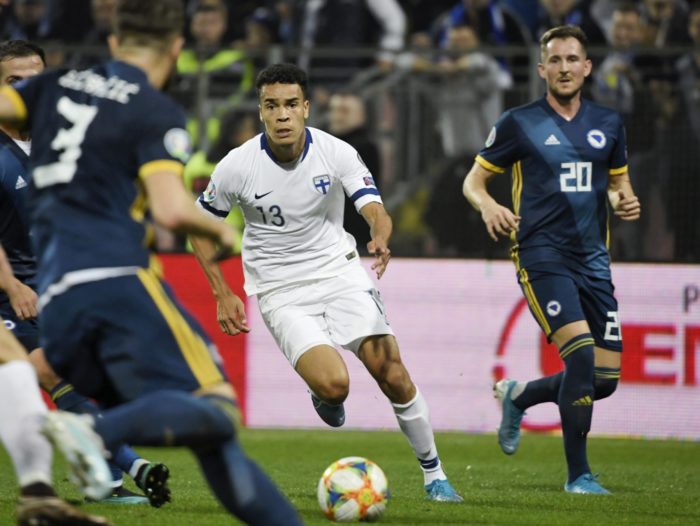 Pyry Soiri (13) of Finland manoeuvres against Bosnia and Herzegovina in a Euro qualifying match in October 2019.Photo: Markku Ulander/Lehtikuva

One of those is Copenhagen’s Parken Stadium, aiming for a 12,000-strong crowd when Finland kick off their opening Group B match on June 12 (a full house would have been 38,000). Whether present on the day or watching at home, fans will be simply delighted that Finland have finally made it to a tournament after decades of near misses and frustrations. So they’ll also be undaunted by the strength of Finland’s opposition in the group, consisting of Belgium – currently ranked by FIFA as the best national side in the world – and Russia, as well as Denmark, champions in 1992.

Those Finnish fans who do attend the games (Finnish health officials recommend watching the tournament at home) won’t have far to travel, since the Belgium and Russia matches will both be played at the Krestovsky Stadium in Saint Petersburg, just across the eastern Finnish border. Helsinki’s Nordic neighbour Copenhagen is a mere two-hour flight away.

Under the management of head coach Markku Kanerva, the Finns ensured qualification with second place in their qualifying group behind Italy, gelling impressively as a team as the campaign progressed, spurred on by the group’s top scorer, Teemu Pukki, who had ten goals. Finland fervently hope that a late-season injury Pukki suffered in a match for his English Championship–winning side Norwich City will heal in time for him to participate in the Euros. 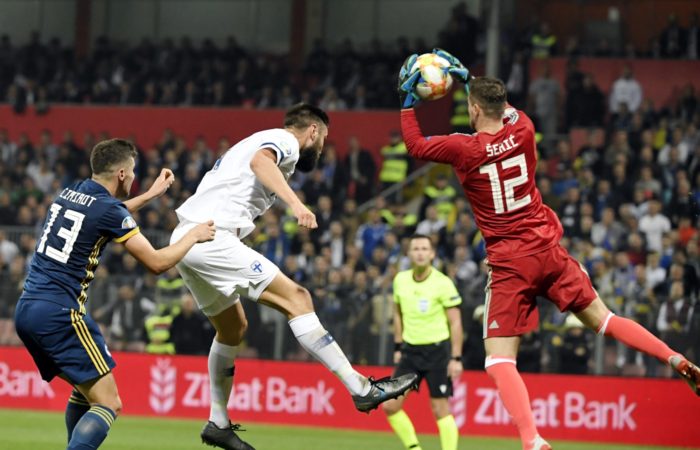 Finnish player Tim Sparv (in white) tries to put the ball past goalkeeper Ibrahim Šehić of Bosnia and Herzegovina in a Euro qualifying match in October 2019.Photo: Markku Ulander/Lehtikuva

Pukki is an undoubted goal machine, but this is no one-man team, and its cohesive team spirit counts as one of its strengths. When Finland’s Glen Kamara, who plays for Scottish champions Glasgow Rangers, experienced racist abuse in a club match against Slavia Prague, his Finnish teammates appeared shortly afterwards with “We stand with Glen” T-shirts. Finland’s captain, Tim Sparv, made similarly supportive media statements.

On a lighter note, the joke in Ireland is that Finland has the only Irishman in the tournament. Ireland did not qualify, but Finnish defender Daniel O’Shaughnessy has dual citizenship by virtue of his father, who is Irish.

We conclude with a note of colourful football trivia: The game against Belgium will bring back memories of a Euros qualifying match between the same two teams at Helsinki’s Olympic Stadium in June 2007. The referee had to stop the game for several minutes when a giant eagle-owl, later dubbed Bubi, swooped in and landed on the Belgian goal, much to the mirth of the Finnish supporters. Ever since, Finland’s men’s national team has gone by the nickname Eagle-Owls (Huuhkajat in Finnish). Finland won that match, 2–0.