Felix Fiilin (left) and Ole Meiwes (seated) enjoy the landscape and the social atmosphere at Micropolis, a quintessential Janne Saario skatepark in Helsinki.

At six years old, Saario learned to skate on a homemade board that his father assembled from plywood and four office-chair wheels.

“It was a bit difficult because the wheels rotated 360 degrees,” says Saario, smiling. “But that’s how I learned. I guess my father thought it would be a passing trend like the yo-yo, but eventually he bought me a skateboard.”

Skateboarding turned out to be much more than just a phase. The streets, courtyards and public spaces of Helsinki became the stage where Saario perfected his slides, grinds and kickflips as a teenager. By the time he was in high school, Element Skateboards recognised his talent and invited him to join its European professional team. He travelled the world as a pro skater.

He also became interested in architecture and art, including environmental art. Today Saario is a qualified landscape architect and a key figure on the global skatepark design scene, with 35 parks to his name in countries including Finland, Sweden and the Netherlands.

“I think that a skatepark architect needs to skate for at least eight years before designing,” says Saario, now in his early thirties and a father of two.

In addition to his love of skateboarding, which he still does for fun, Saario’s motivation derives from turning urban spaces into parks “where youngsters can express themselves.” There are not many urban spaces designed specifically for young people.

“Teenagers like to hang out, so the social aspect of skateparks is vital,” he says. “Becoming a parent has also made me think even more about subsequent generations.”

Watch the making of Saario’s Street Unit movable skatepark elements, and see people skate them when they’re set up in front of Helsinki’s Ice Hall arena.

Saario’s skateparks combines concrete with conceptual thinking to create, in his own words, “skateable sculptures.” He describes skateboarding as “radical ballet.”

Saario currently works on about ten projects a year. One of his recent ventures is Street Unit, a line of movable elements and obstacles that make it easy to set up a skatepark wherever needed. “Skate spaces can also be seasonal or temporary,” he says. The units are made of steel to endure hardcore use and rough weather.

He has a skatepark under construction in Norway. He’s also working on one in Columbus, Indiana, in the US. Eliel Saarinen and his son Eero Saarinen, both storied Finnish architects, designed a number of buildings in that city, several of which are now National Historic Landmarks.

“I guess they just like Finnish architects,” says Saario.

The view from Micropolis 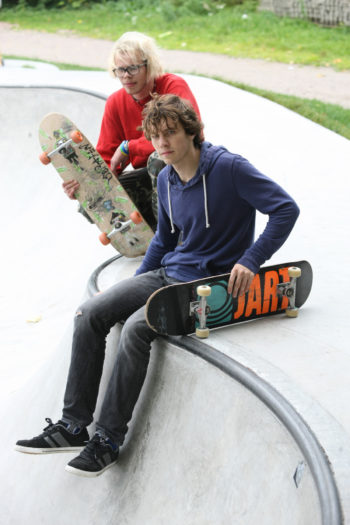 Hanging out on the edge: Felix Fiilin (left) and Ole Meiwes take a break at Micropolis, a skatepark in Helsinki with street elements, green areas and an organically shaped pool.Photo: Hernan Patiño

Located in the Töölö neighbourhood of Helsinki, Micropolis is a quintessential Saario skatepark. Completed in 2006, it consists of various street elements, green areas and an organically shaped pool. Saario’s design also preserved all the trees in the area. Lawn corridors run through the grounds, so that the hares of Central Park can still roam around.

Ole Meiwes, an exchange student from Germany, found Micropolis with Skatemap, an app for locating skateparks in Europe.

“This park is great because you can do almost any trick,” he says. “There’s enough space to manoeuvre.” As a landscape gardener, he appreciates the beauty of Saario’s structures. “I know how difficult it is to build a park like this. It also looks good because there are trees and green all around.”

Felix Fiilin visits Micropolis almost daily with either a skateboard or a scooter. “It’s near my workplace, so it’s convenient to come here when I finish my shift,” he says.

For Fiilin, the social aspect of skating is as important as a good skatepark. “I probably wouldn’t be doing this if there was nobody skating with me here,” he says.

Fiilin learnt to skate in Barcelona, often considered a mecca for skaters. “In Barcelona it’s easier because the weather is better than in Finland,” he says, “but I still think that we need more skateparks here.”

Sandrina Lindgren combines housework and dance in her Household Dance Protocol project in Turku. You may be amazed at what you discover if you include playfulness and movement in your daily chores.