Across Finland, there are about 5,000 return machines for bottles and cans. Most of them are located in grocery stores, gas stations and kiosks. You put the bottle in and the machine scans it, sorts it and issues a receipt so you can get the deposit money back.

Finland’s system for returning beverage containers started in the 1950s, and today almost every bottle and can is recycled. Convenience is the cornerstone of the system’s success.

Finnish residents returned more than two billion bottles and cans in 2020, 93 percent of the total amount purchased in the country. The factors that make this possible include automated bottle-return machines developed decades ago and the expansion of the system to include plastic bottles in the 2000s.

The EU directive on single-use plastics has focused additional attention on bottle recycling and sustainability. Approved by an overwhelming majority of the European Parliament in 2019, the directive stipulates that, by 2029, 90 percent of plastic beverage bottles should be recycled. Since Finland handily surpassed that mark years ago, its system is attracting notice as a possible solution for use in other countries.

Recycling bottles and cans conserves energy and raw materials, and reduces litter in cities and wilderness areas. Beverage containers become part of the circular economy as their materials are recycled into new containers or reused in other products. 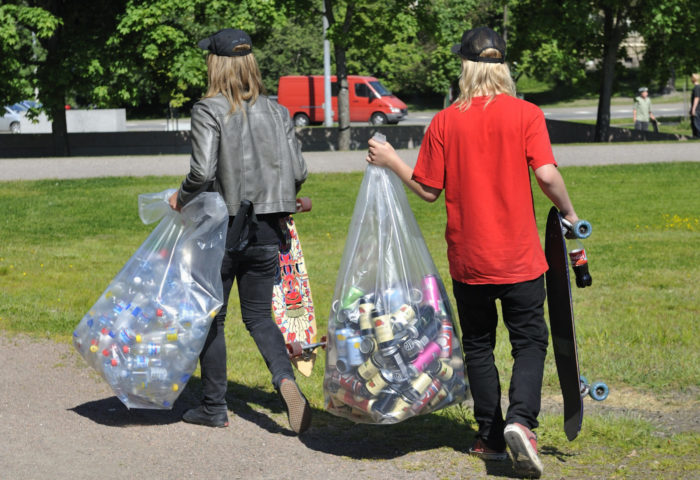 These guys have collected abandoned bottles and cans and are going to return them to get the deposit money. Photo: Pekka Sakki/Lehtikuva

The first bottle recycling programmes began back in the 1950s. Nowadays there are almost 5,000 container-return machines across Finland. Most of them are located in the same shops and kiosks that sell beverages, making returning them a convenient part of people’s routine. Hotels, restaurants, offices, schools and event organisers return containers through their beverage providers.

Every time a person buys a beverage in a bottle or can, they pay a deposit of 15 to 40 cents. The system covers alcoholic beverages, soft drinks and bottled water, in aluminium cans, glass bottles and bottles made from PET plastic.

The return machines are easy to use. You place a bottle or can on a set of miniature conveyor belts at the front of the machine. They carry it past a scanner and out of sight. The machine sorts the bottles and crushes the cans. When you’re done, you press a button and the machine gives you a receipt. Plastic bottles are worth 20 to 40 cents, depending on their size, while glass bottles are worth 10 to 40 cents and aluminium cans are 15 cents. The returned containers are recycled or the materials are reused.

When you present the receipt to the store’s cashier, they give you cash back or deduct the bottle-return money from your purchase. Palpa processes 360 million euros a year in bottle deposit money.

Tons and tons of bottles and cans 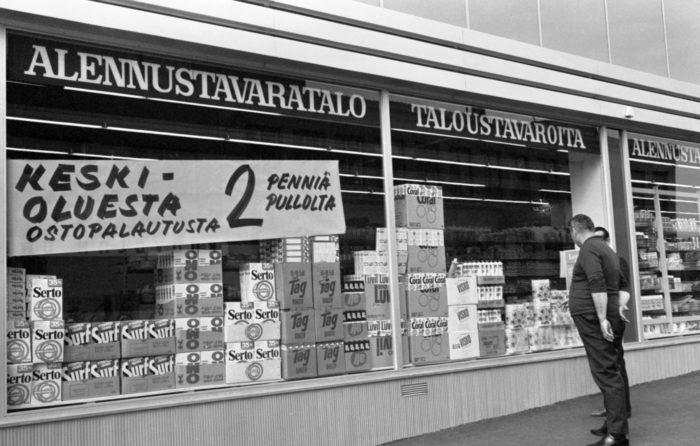 In 1969, this discount store in the southern Finnish city of Kouvola advertised a return payment of two pennies per beer bottle. Photo: Erkki Laitila/Lehtikuva

The government has entrusted this function to the private sector. “Palpa is completely nonprofit and receives no government funding,” says Tommi Vihavainen, Palpa’s director of producer services, ICT and communication. The company’s owners include major beverage producers such as Olvi, Sinebrychoff and Hartwall. Around 200 other companies pay membership fees. These companies and Palpa’s owners are then exempt from paying packaging tax on their beverage products.

Palpa’s turnover amounts to about 80 million euros, generated from material sales, recycling fees and charges for nonreturnable packaging. It uses the money to keep the system running.

Russia, the UK and other countries have shown interest in the Finnish system. “Most visitors want to see how the return system works in Finland,” says Vihavainen. “We don’t act as consultants, but we’re proud to present our system.” 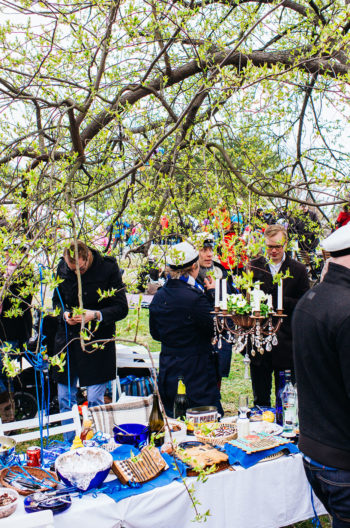 May Day often involves elaborate picnic brunches in public parks, and that means lots of empty bottles. During this and other big celebrations, independent bottle and can collectors make life easier for cities’ sanitation departments by removing the containers. Photo: Jussi Hellsten/Helsinki Marketing

Any bottles that someone happens to leave behind on the street or in a park are snapped up by someone who returns them for the deposit money. The City of Helsinki has noticed that these unofficial collectors greatly facilitate the life of the city during big celebrations such as May Day (April 30 and May 1), which often involves elaborate picnic brunches in public parks.

“We only collect sparkling-wine bottles,” says Elina Nummi, an urban environment project manager with the City of Helsinki. Those are the biggest, heaviest bottles, and they’re also very popular on May Day. “Independent container collectors carry away the rest. In addition, we’ve been offering a free cinema ticket for every 20 wine bottles [that someone brings to our collection points]. One year we issued 1,500 tickets under this scheme.” That’s 30,000 bottles – it must have been quite a party.

Commercial event organisers have also tackled bottle recycling head-on, refusing to let it become a headache. One example is Helsinki’s Flow Festival, Finland’s largest event of its kind, with more than 70,000 visitors attending over the course of three or four days packed with concerts. They use a bottle-deposit system to prompt festivalgoers to make sure the bottles are recycled properly, not abandoned or left in the regular trash bins.

Susanna Hulkkonen, Flow’s press officer, says that they reabsorb all the bottles sold on the premises. “The price of the drink includes a deposit: a bottle of wine or champagne is ten euros, and all the rest are one euro,” she says. You can return the bottle to the point of sale and get your deposit back, or you can donate the deposit money to Finnish Association for Nature Conservation by bringing the bottle to their booth on the festival grounds.

Finland pioneers circular economy to ensure prosperity in the future

The goal of the circular economy is simple: to halt over-consumption so that we can still afford to be prosperous in the future.