Everyone knows what a carbon footprint is, but how can a “carbon handprint” help humanity achieve carbon neutrality and ensure that future generations will also be able to enjoy walking through an unspoiled forest?

Government organisations and private-sector businesses in Finland have produced a number of roadmaps – another name for strategies. They chart possible ways to fulfil the bold 2035 goal set out by the government.

“Roadmaps can have a catalysing role when all stakeholders are included,” says Oras Tynkkynen, senior advisor on sustainability at the Finnish Innovation Fund Sitra. Once a goal and timeframe have been set, the government, the business community and citizens can work together to reach that goal. “It comes through the millions of decisions that are made every day at all levels.”

Tynkkynen believes carbon neutrality is achievable faster than is commonly expected, and he becomes more animated as our conversation continues. “For example, take the law to phase out the use of coal for energy by 2029,” he says. “Most energy companies will have phased out coal long before that.”

There are two basic types of roadmaps in Finland concerning carbon neutrality. The first is government-initiated and comes from the top down to society’s many sectors and citizens. There is a danger, says Tynkkynen, that these long-term roadmaps will outlive the short-term political cycle without necessary but difficult decisions being made.

Replicable around the world 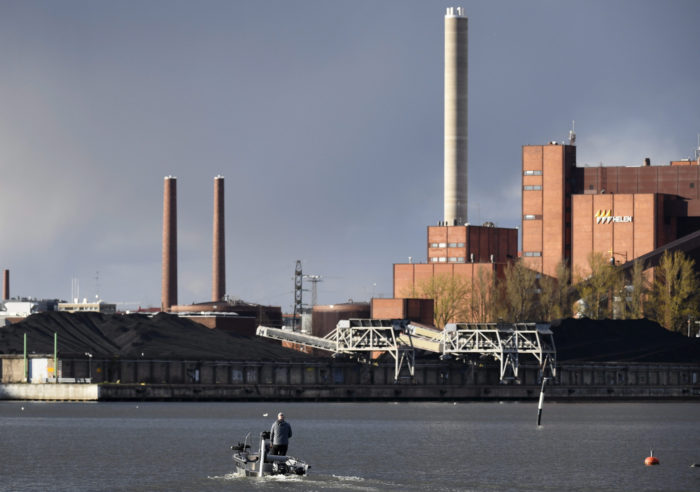 Helsinki power plants in Hanasaari (pictured) and Salmisaari will discontinue use of coal by 2024 and 2029, replacing it, in part, with additional heat pumps that recover thermal energy from wastewater.Photo: Vesa Moilanen/Lehtikuva

“A roadmap as such isn’t worth much,” he says. “Something has to happen. When voters demand action, politicians can say, ‘We made a roadmap!’ It can be like a get-out-of-jail-free card.”

The second kind of roadmap is sector-specific and comes from below instead of from the top, when business sectors themselves take the lead. Industries maintain ownership of their goals and come up with a plan. They can then invite the government to help them clear up any challenges that impede them. Sector-specific carbon neutral roadmaps with government endorsement are a rare phenomenon internationally, and Tynkkynen is hopeful that they could be replicable elsewhere in the world.

“There has been a dramatic change in tone,” says Tynkkynen, who was a member of Parliament from 2004 to 2015. For part of that time he also served as a climate policy specialist in the prime minister’s office. “When I told industries, ‘You have to do this,’ they said, ‘Forget about it.’ Now that they’re in charge, they are saying ‘Yes, and here’s how!’”

On the way to surpassing expectations 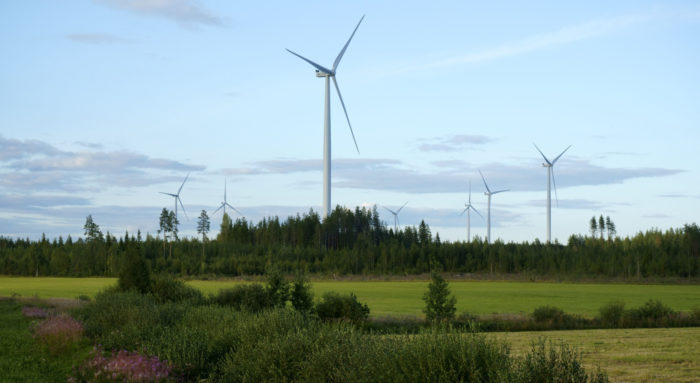 Sustainable energy sources, such as these windmills in central Finland, form part of the solution as the country moves towards its goal of carbon neutrality by 2035.Photo: Santeri Viinamäki/Lehtikuva

Helena Soimakallio is executive director of sustainable development at Technology Industries of Finland, an association representing Finland’s largest economic export sector. I talked with her about what the tech industry is doing about carbon neutrality.

Soimakallio has had the task of creating a technology assessment and feasibility timeline for reaching the government’s carbon neutrality goal. All major industries in Finland have drafted similar roadmaps. They show that the combined industrial sectors could actually outdo their allocated reduction targets by two to four million tonnes of CO2 equivalent within the stipulated timeframe.

“It is doable,” says Soimakallio, “but to get the industry interested, we ask the government for a favourable business environment and support in R&D and in maintaining a competitive global business perspective.”

The industry has leverage that may result in not only carbon neutrality but also in improvements to the economy, if innovations can be jumpstarted quickly and exported to the rest of the world. A new law gives companies a 150-percent tax deduction for joint research and development projects between 2021 and 2025 – it’s part of the government’s policy goal of raising the share of R&D to 4 percent of GDP by 2030. 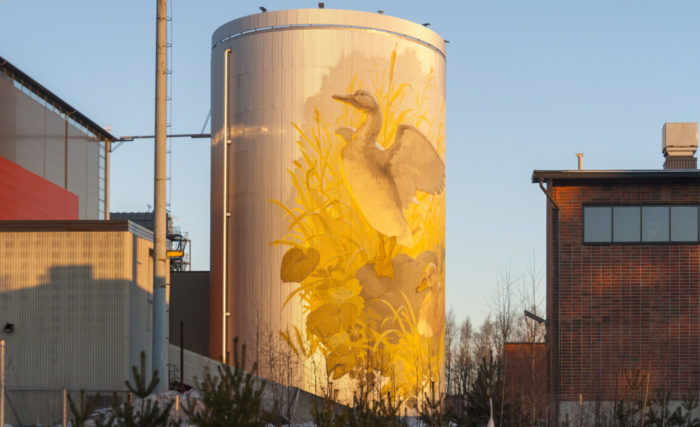 Two ducks in the grass, a mural by Anetta Lukjanova and Taneli Stenberg, decorates the wall of a building that houses a thermal energy battery at a power plant in the municipality of Espoo, just west of Helsinki. It commemorates the decommissioning of one of the plant’s coal-burning units in 2020; the other will be discontinued by 2025. Photo: Eija Tervo/Lehtikuva

In practice, one of the things the tech sector is looking at is its carbon handprint. In contrast to a carbon footprint, which refers to greenhouse gas emissions caused by a product, the term “carbon handprint” refers to the positive environmental impact a product makes throughout its life cycle.

The idea of a carbon handprint originates in Finland. It was developed by the VTT Technical Research Centre of Finland and Lappeenranta University with support from the Climate Leadership Coalition.

Making tech products 10 to 15 percent more efficient, for example, adds up to huge carbon decreases globally, as well as a massive business opportunity. As Finnish tech strives to be synonymous with quality, sustainability measures such as these help the country’s tech sector keep its prominence on the global map.

Perhaps the most important effect of Finland’s 2035 carbon neutrality goal and of the multiple roadmaps is that they provide a common direction. Action can occur much faster than expected if all the key stakeholders buy into the idea and work towards it together.

The goal is in place, and roadmaps show the way. Now the situation calls for continued ambitious action, enthusiastic cooperation and the sharing of solutions around the world.