Anna Evilä (centre) distributes information about sustainable living in her home town. She has reorganised her own lifestyle to be sustainable, sharing her home with her mother Marja-Liisa, her children Hemmo and Menni and her subtenant Mira.

When cities make it easy to live an ecological lifestyle, people are usually keen to do it.

Anna Evilä (39 at the time of writing) used to be a scout, so she knows that there’s an answer to every problem. A few years ago, the question occupying her mind was how to build a spirit of community and commitment to sustainability among the people of Kerava, her hometown of 36,000, located 30 kilometres (18 miles) north of Helsinki.

“As an individual, you want to act in an ecological way, but it’s not always easy,” says Anna Evilä.  “You need information and you need to make comparisons. In an already busy life, this is tricky.

“That’s when I came up with the idea of establishing a single place in the town where all the necessary information would be available. It wouldn’t be a recycling centre, but rather a place where ideas are shared, and where things could be upcycled before they were discarded.”

As a former councillor, Evilä knows how town decisions are made. She has studied environmental technology and sustainable development, holds a degree in hospitality management and has also taken courses in business development and community education.

“In Finland, if you can make a good argument for a project, the authorities will give you the opportunity to try it out, and see what comes of it,” she says. “I drafted a project plan for the leaders of Kerava and they liked it.” She also obtained support from Sitra, the Finnish Innovation Fund.

Using her network of contacts, she put together a good team. An old country house, owned by Kerava but standing empty, was repurposed for the centre. They named it Jalotus.

“In talks with Kerava, we decided what services could be transferred to Jalotus,” says Evilä. “At present our activities consist of repairs, lending, exchange of goods and ways of improving self-sufficiency. We are also reviving the master-apprentice tradition.” 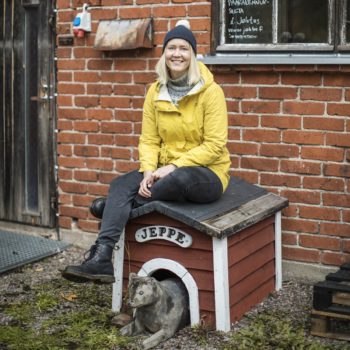 “In Finland, if you can make a good argument for a project, the authorities will give you the opportunity to try it out,” says Anna Evilä.Photo: Kreetta Järvenpää

Evilä believes that small things can make a difference to climate change, but that even more can be achieved with major choices about how we live and travel. She has reorganised her own lifestyle to improve sustainability.

“Why would I need enormous amounts of personal space?” she says. “I live together with more than just core family members. Under the same roof, but with their own rooms, are me and my two children, Hemmo (5) and Menni (7), my mother Marja-Liisa (73) and a subtenant, Mira (33).

“I have plenty of space in the yard, so I’ve let my friends come and grow a garden there. This has taught me about plants at the same time.”

The family doesn’t have a car, and they use bicycles to get around. They try to buy only what they need and what will last. They rarely eat red meat. Evilä says she is currently reorganising her wardrobe:

“What I wear all the time, underwear and tops, is long-lasting and ecologically produced. When I need clothes for special occasions, I rent them.”

Her children have always had a close relationship with nature. Sheep, chickens and rabbits are familiar sights from the yard at Jalotus. Recycling and composting are a natural part of their everyday lives.

“A few years ago I was looking after my father, who was terminally ill,” says Evilä. “It gave me time to think over what is important to me. I want to live with the people who are dear to me, and I want to be able to tell my children that I have played my part in curbing climate change.”