Finnish company Solar Foods uses an apparently magical process to create protein from carbon dioxide, yielding a powder that can be an ingredient in other food products, including almost everything on this table.

Humans cause climate change by putting more carbon dioxide into our atmosphere. Some people, organisations and governments are working to stop greenhouse gas emissions. Another parallel and complementary track also exists: the idea of removing excess gases from the air.

Planting trees is one good way to do this. Another way is for people to take CO2 out of the atmosphere and do something useful with it.

“You can do many different things with carbon capture and utilisation,” says Janne Kärki, research team leader at VTT Technical Research Centre of Finland. “Practically anything you can make from oil, you can make from CO2 and hydrogen.”

Putting CO2 to good use 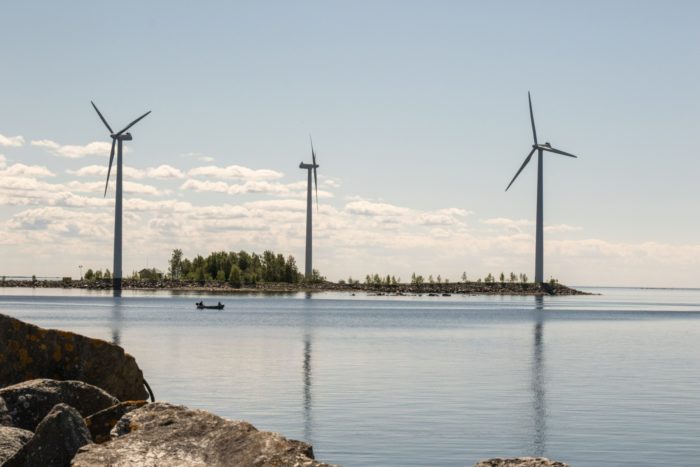 Solein and Power-to-X can be carbon neutral processes by using clean energy sources, such as these windmills in Vatunki, northern Finland. Seppo Hyvönen/Lehtikuva

“Here in Finland we have many projects working on capturing and utilising carbon, such as creating fuels and chemicals,” says Kärki. “Luckily Finland has lots of clean water and wind resources, which are good for hydrogen production, as well as industries that are willing to work with other sectors.”

Before describing the seemingly magical creation of food and energy from thin air, it’s worth mentioning a couple other ideas that are also being developed in Finland and could take CO2 out of the atmosphere for a long time.

“Carbon bound into concrete can be sequestered for centuries,” says Kärki. “Another example is the Finnish company Finnfoam. They have developed insulation materials out of captured carbon which could last 70 years.”

However, most ideas are carbon neutral, meaning they neither add nor subtract CO2 from the atmosphere. Carbon neutrality is a major goal in the fight against climate change.

One carbon neutral idea now attracting international attention is that of creating synthetic fuel from CO2; another is that of making food out of CO2. 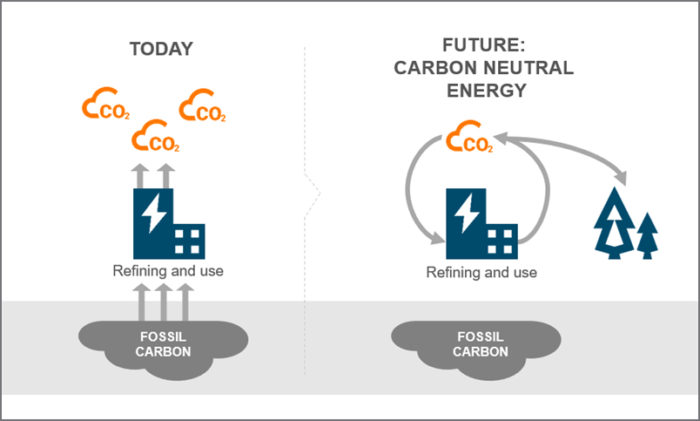 Power-to-X uses CO2 to produce fuel that can take the place of fossil fuels. At left, fossil fuels are extracted and increase CO2 levels. At right is a future scenario in which fossil fuels stay in the ground. Illustration: Wärtsilä

A process known as Power-to-X (also sometimes written “Power2X” or “P2X”) converts power such as excess solar or wind electricity into a form that can be used later – synthetic fuel. You split water – H2O – into hydrogen and oxygen using electrolysis. Next, you combine the hydrogen with carbon dioxide captured from the air or from industrial processes, creating fuel that works in a car, plane or ship. For the fuel to be considered climate friendly, the process uses renewable energy.

Lappeenranta-Lahti University of Technology (LUT), Finnish energy company St1 and Wärtsilä, a Finnish manufacturer of energy-related technologies, published a press release about Power-to-X solutions, noting that they could help Finland achieve its goal of becoming carbon neutral by 2035. The dean of LUT’s school of energy systems, Jarmo Partanen, said, “By recycling atmospheric carbon dioxide, we will reduce the amount of fossil oil pumped out of the ground.”

In this scenario, although fuel is still being burned, it is not fossil fuel. It was produced in a carbon neutral manner, while oil deposits in the ground stay where they are. This is a step in the right direction. 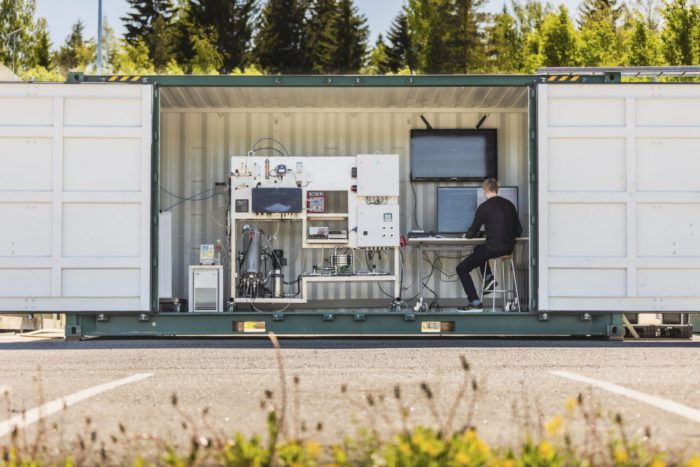 Solar Foods spun off after a VTT and LUT joint research project called Neo-Carbon, where the prototype was housed in a shipping container, demonstrating how little space was required. Photo: Teemu Leinonen/LUT

Solar Foods is a Finnish company spun off from research conducted at VTT and LUT. Originally trying to create synthetic oil, participants soon realised the microbial residue of the process was edible and high in protein.

Microbes are fed CO2 and nutrients such as nitrogen, calcium, phosphorus and potassium. They ferment just like yeast does when you make bread or brew beer. The microorganisms are later dried out and become a powder.

“It doesn’t taste like anything, which is good,” says Pasi Vainikka, CEO of Solar Foods. “Pea protein tastes awful and is used in some meat substitute products. Companies who use pea protein need a huge industrial process to mask the taste. We don’t need to do that.”

Solar Foods estimates that 25 percent of global greenhouse gas emissions are traceable to food production, including agriculture and the food industry. According to Vainikka, this means that, even if the world completely switched to renewable energy, we’d still need to take action to reduce food-related emissions.

Coming soon to a plate near you 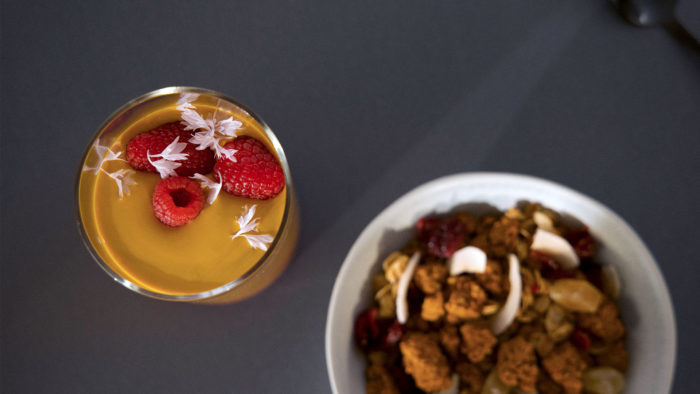 “I’ll take a CO2 smoothie with fresh raspberries on top.” Solein, a protein powder made using carbon dioxide, can be included in food products that are already familiar to consumers. Photo: Solar Foods

Solar Foods’ protein product, solein, can be used as an ingredient in existing foods such as beverages, cereals or pasta. It can also be used in the growing meat-substitute and dairy-substitute industries. It might have applications as part of astronauts’ diet on long missions.

“About 25 to 30 kilowatt-hours of renewable electricity and two kilograms (4.4 pounds) of CO2 are needed to make one kilo (2.2 pounds) of cells,” says Vainikka. “These natural organisms are about 65 percent protein, 25 percent carbohydrates and dietary fibre, and 10 percent fat. Solein can replace the nutrition people get from meat. As we grow, the price should be less than animal-based proteins.”

Solein requires a tiny fraction of the space that farms or greenhouses use. A prototype of a predecessor system fit into a shipping container and could produce one kilogram of protein per day.

It also uses no fertilisers, and requires only a small quantity of water, which is then recycled within the production system. If you consider the ratio of protein produced to resources consumed, solein handily beats options such as soy powder. And if it reduces the need for agricultural land, then solein can even be carbon-negative. Taking resource use into account, Solar Foods says that solein’s emission stats are ten times better than plants and 100 times better than meat.

As of the time of writing, Solar Foods has received about 35 million euros in funding. The company is ramping up production, and plans to launch its product in grocery stores in certain leading markets early in 2022. The EU, whose food regulatory process is longer than that of some countries, should see solein products on store shelves in 2023.

“We don’t expect consumers to change,” Vainikka says. “The new products will be almost like what you find today. But tastes will change with each generation. Maybe our grandkids will be used to cultured meat grown in a lab. They might be shocked to think that to get meat our generation had to kill an animal.”