One of Tampere’s new trams glides through the city on a training run on a snowy day in early March 2021.

With its industrial heritage and its red brick mills lining the rapids that cascade between two enormous lakes, the central western Finnish city of Tampere is known for its down-to-earth, working-class culture.

The area also has a distinctive dialect and slang. The name of the city transportation company, Nysse, is the perfect example. It’s a nod to a colloquialism used by people waiting at bus stops: In the phrase Nyt se tulee (Here it comes), the local accent compresses nyt se into nysse.

Citizens of the most populous inland city in the Nordic region are now using this expression as they glimpse any of 19 new trams at either end of the main street Hämeenkatu. It remains to be seen if the new transport system earns a local nickname to abbreviate its official Finnish name, Tampereen Ratikka (Tampere’s Tram). One thing is certain: the opening of its first phase for public service in August 2021, following the completion of tests and staff training, represents the biggest civic and economic development in the city for decades. 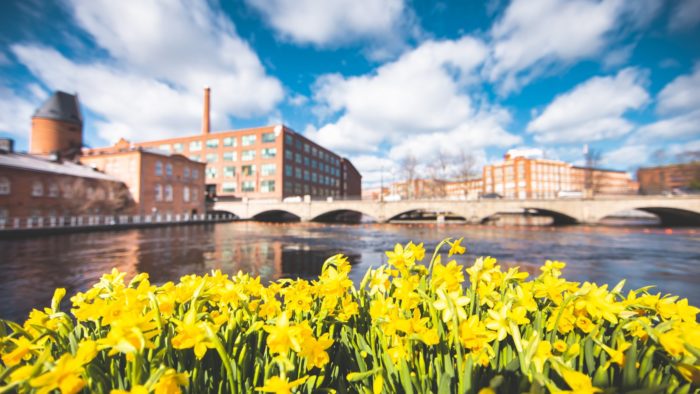 Daffodils bloom on a crisp spring day, with the red brick of Tampere’s landmark former industrial buildings in the background.Photo: Laura Vanzo/Visit Tampere

The main track extends from the southeastern suburb of Hervanta, home of an extensive university campus and various tech businesses, to the Pyynikki district in the west, with its fabulous pine-lined ridge and sprawling lake views. A subsidiary line connects the city’s main bus station to Tampere University Hospital and the university’s Kauppi Campus, and the second phase, due for completion in 2024, will extend the track from Pyynikki to the suburb of Lentävänniemi.

“Studies into the feasibility of the tram line have been going on over a long time,” says Pekka Sirviö, CEO of Tampereen Raitiotie, the company tasked with delivering the system and supervising its operation in cooperation with Nysse. “It was recognised many years ago that there is a huge need for higher capacity for public transportation in Tampere. There is also a strong case in terms of city development.” A fixed-rail transport system, he adds, has been a strong driver for attracting investment.

Check out aerial footage of Tampere accompanied by dramatic music as the new tram goes on a test drive in September 2020.Video: Tampereen Ratikka

Prolonged discussions preceded the decision to go ahead, and the four-year construction period involved significant disruption, but the majority of Tampere’s inhabitants now take a positive view of the project.

“We have held a number of surveys, and the latest, in November 2020, told us that 70 percent of citizens were positive or very positive,” says Sirviö. “It helps that we have been able to keep within budget and stick to our planned schedule, neither of which is so common for this kind of project. Now that people can see what sort of system it is, they have accepted it.”

Tampere becomes the only Finnish city other than Helsinki to boast a tram service, but additional urban areas are expressing interest. Tampere carried out its preliminary studies in cooperation with the southwestern city of Turku, and a decision on building a comparable system there is forthcoming. Similar discussions are ongoing in Vantaa (just north of Helsinki), Jyväskylä (in central Finland) and Oulu (a northern city on the west coast).

Meanwhile, Helsinki is supplementing its existing tram network with its own 25-kilometre (15-mile) Jokeri Light Rail line arching through the northern suburbs, set to open in 2024. 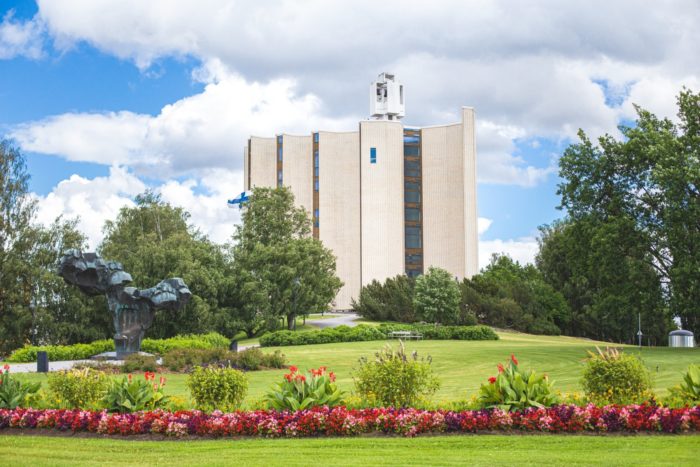 Kaleva Church, built in the mid-1960s, has a stop named after it on one of Tampere’s tramlines. The bell tower offers an expansive view of Tampere and the surrounding countryside. Photo: Laura Vanzo/Visit Tampere

Cities are increasingly favouring light rail and tram systems to help reach carbon neutrality targets. Rail services reduce bus traffic and decrease car use in central urban areas. In Tampere’s case, the Ratikka will support the city in achieving its goal of becoming carbon neutral by 2030.

“Another big advantage is that 11 of our 15 kilometres [6.8 out of 9.3 miles] in the first phase consist of segregated tracks,” Sirviö says. On those sections, the trams do not have to share their path with cars or other traffic. “So we can maintain a higher average speed with a high degree of safety. We also have sophisticated digitalisation to assess passenger numbers.”

Tourist visitors to Tampere will also benefit. They might jump on the tram outside the railway station on arrival and enjoy a tour past some of the main attractions, such as the Tammerkoski rapids, the eye-catching architecture of the Metso public library, and the Tampere Art Museum.

The inhabitants of Tampere are happy about the new service opening and relieved about the conclusion of the necessary construction. As the project progressed, the sight of the trams gliding through the city on training runs became a familiar one, whetting people’s appetite for the day when they could get onboard.