How to speak Finnish, according to the new Blade Runner

Finland is, um, honoured that the Finnish language appears in “Blade Runner 2049.”

You know that feeling when you’re abroad and you hear somebody speaking your language? Your ears perk up; you automatically turn your head. That feeling just hit the big screen for Finnish speakers.

In Blade Runner 2049 (premiere October 6, 2017), we find ourselves 30 years beyond the original Blade Runner movie, which was set in 2019. (It premiered in 1982.) In the dark, dystopian Los Angeles of the future, many languages are spoken – and apparently Finnish is among them.

In this world, “blade runner” is the name for an officer who hunts down stray replicants, androids that are practically indistinguishable from humans. Ryan Gosling plays a blade runner known as K.

Finnish actor Krista Kosonen appears in a scene beside Gosling, Mackenzie Davis and Elarica Johnson. The three women are “street girls,” and Kosonen’s character gives her friends a warning about K in Finnish. As noted in the newspaper Iltasanomat, she says, “Tää jätkä on blade runner. Se on v***n vaarallinen. Annetaan sen olla.”

That’s right. These five seconds of Finnish-language film fame include a famously foul swearword. Kosonen says (our translation), “This guy’s a blade runner. He’s f***ing dangerous. Let’s leave him be.” 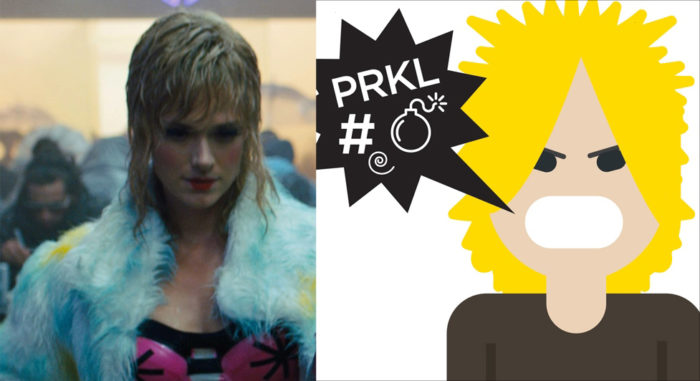 We would argue that there’s a certain resemblance between Finnish actor Krista Kosonen’s character in “Blade Runner 2049” and ThisisFINLAND’s own Perkele emoji.Photo: Alcon Entertainment; emoji: ThisisFINLAND.fi

We won’t give away what happens next, but we did happen to notice that Kosonen’s character looks a lot like our very own Perkele emoji, which is one of Finland’s official national emojis.

It’s based on another Finnish swearword, but hey (or should we say hei), the sentiment is similar. It wouldn’t surprise us if these expressions actually did live until 2049 and beyond.