Times have changed since the days when artist Tom of Finland (real name Touko Laaksonen, 1920–1991) needed to destroy his stylised homoerotic images because of the conservative atmosphere in his home country. Today these controversial artworks have become a symbol of tolerance.

They made, and continue to make, a significant contribution to the way sexual minorities perceive themselves. Laaksonen is often considered Finland’s most famous artist internationally. His work has adorned postage stamps – the most popular stamp set in the history of the Finnish Postal Service – and now it has also become an emoji. The emoji recognises the impact and importance of Tom of Finland’s art, and appears just before same-sex marriage officially becomes legal in Finland (as of March 1, 2017). 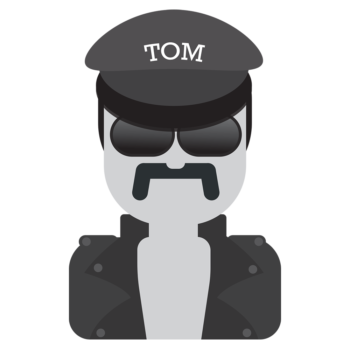 The Finnish Postal Service, Posti, first introduced stamps in 1856. It took them 158 years to release a stamp set that aroused worldwide interest – a lot of it. Posti’s webstore crashed in April 2014 under the weight of 70,000 pre-orders flooding in from 178 countries. This was all down to Tom of Finland.

The stamp set was by far the most public gesture of acceptance for the controversial Finnish artist Touko Laaksonen, who created his work under the pseudonym Tom of Finland. Times have changed since conservative post-war Finland, when he first illustrated men in various states of undress and coupling. Back then Laaksonen was, at times, forced to destroy his illegal imaginings, when unable to find a safe place to store them. 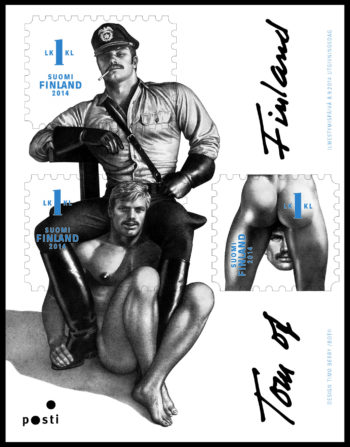 Tom of Finland has been the most popular stamp set ever launched by the Finnish Postal Service. Photo: Itella Posti/Finland; original images (1978, 1979) Tom of Finland Foundation/USA.

“The things he did are seen in a different light these days, more sympathetic,” says Susanna Luoto, the Finnish representative of the Tom of Finland Foundation (ToFF), which initiated the Posti stamp. “It has entered into another field than purely sexual. Tom stands for all tolerance today, beyond homosexuality.”

The current ubiquity of Tom’s moustachioed masculinity reflects this wider acceptance. His iconic images have appeared on shopping bags, bed sheets, paper products, aprons and fire blankets, thanks to the Foundation’s collaborations with Finnish companies such as Finlayson, Putinki and Jalo Helsinki.

The Finnish textile company Finlayson exclusively prints Tom’s monochrome fabric. When Tom jumped into beds as bedlinen, the Finlayson brand jumped, too. The sales of the webshop doubled and the overall sales grew significantly compared to previous years. Tom of Finland helped a company, previously operating mainly in Finland, to grow internationally: the line was taken to more than 21 countries. It has sold the most in its home country, with Sweden and the USA following. 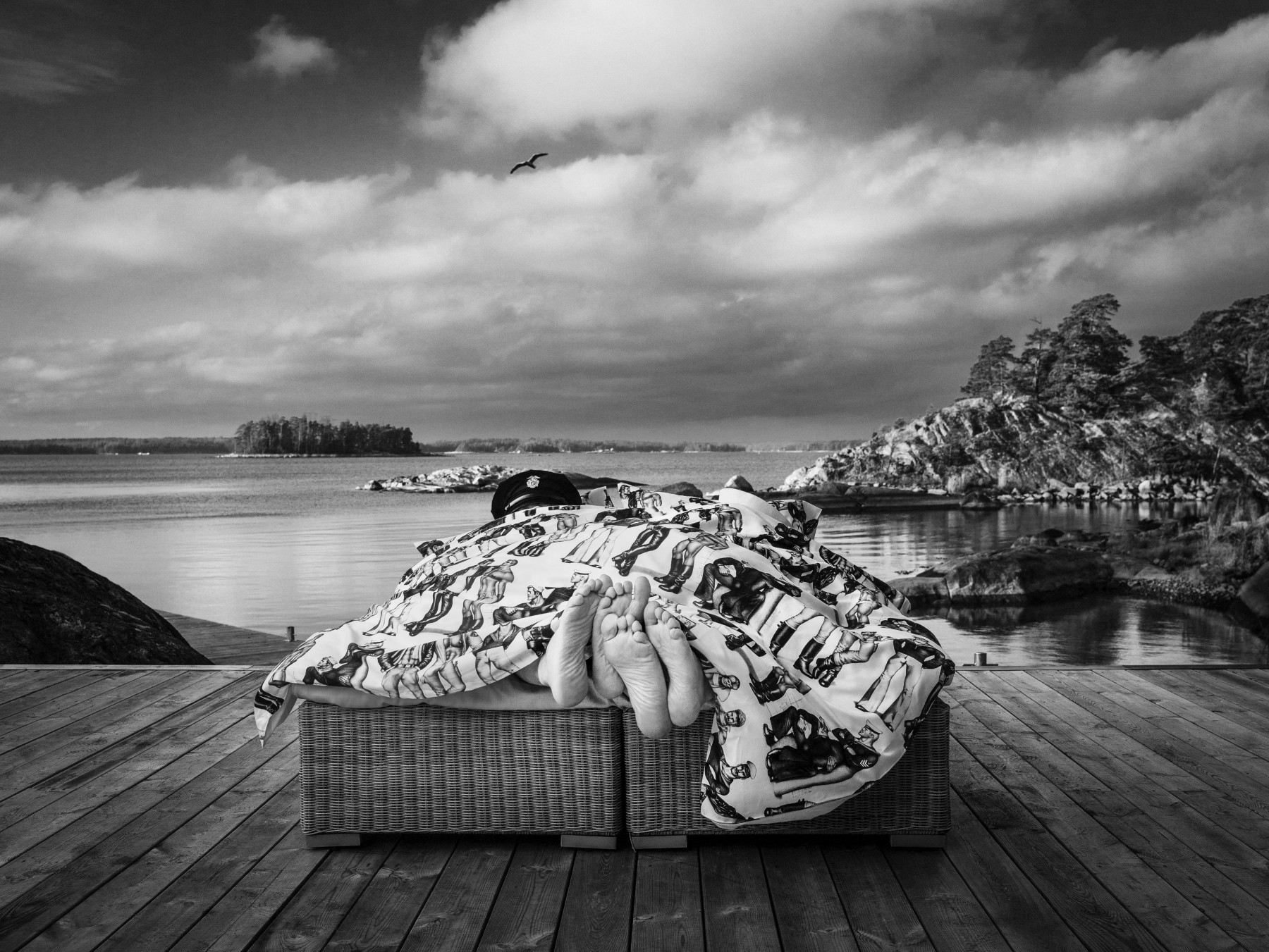 Touko Laaksonen produced over 3,500 works during his lifetime and many now adorn shopping bags, bed sheets, paper products, aprons and fire blankets. The illustrated monochrome images on the Finlayson textile products have been a hit ever since they were launched.Photo: Finlayson

“The way you embed someone is that you endear them to the population, and you do that through things that can be found in everyday life,” explains ToFF president Durk Dehner. “It’s a really healthy way to spread the news, by allowing people to see it, explore it, find out who this man was.”

Although Tom of Finland had cultivated a loyal fanbase in the US from 1956, when his images first appeared in male muscle magazine Physique Pictorial, his inaugural visit to America only came in the late 1970s. Here he found the social climate more conducive to his lifestyle and he became a frequent visitor. 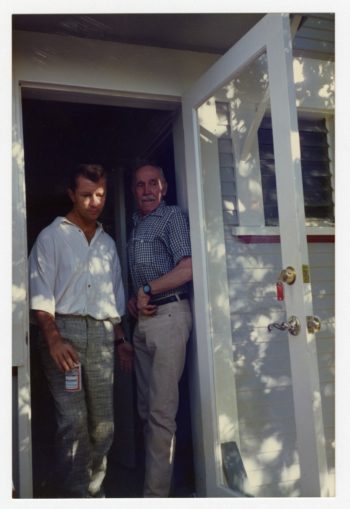 When Touko Laaksonen began to visit the US regularly in the late 1970s, he came to realise the profound effect that Tom of Finland was having on the gay community. Laaksonen (right) was inspired by his muse and good friend Durk Dehner.Photo: Tom of Finland Foundation

Upon Touko Laaksonen’s eventual passing in 1991, Durk Dehner, his former muse and good friend, took up the responsibility of preserving his legacy.

“I gave him my personal commitment that I would do everything within my means to keep him in popular culture,” Dehner says. “I have been able to do that from generation to generation, because his work is timeless.” 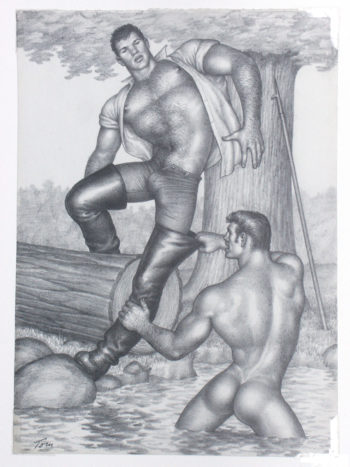 Tom of Finland (real name Touko Laaksonen, 1920–1991) is often called the most famous Finnish artist in the world. His highly stylized homoerotic images have widely influenced not only gay men, but also pop culture and fashion aesthetics.Tom of Finland, Untitled, 1966, graphite on paper, © 1966 Tom of Finland Foundation.

Those seeking his work don’t have to look far. Alongside the expanding catalogue of Tom-themed products on offer, the artist’s work has also been displayed in Germany, Spain, Canada and Norway, to name but a handful of countries. For those who wish to learn more about the beloved man behind the imagery, Finnish director Dome Karukoski’s biographical feature film Tom of Finland releases on February 24, 2017 in Finland and later the same year in other markets. There is even a Tom of Finland musical (in the southwestern Finnish city of Turku until May 6, 2017).

With a film, a musical and numerous exhibitions, Tom is in no danger of slipping out of the public’s consciousness any time soon.

“This man and his art are endeared and loved and celebrated by all of these people from all of these countries around the world,” Dehner observes. “I can’t think of a better ambassador for Finland than Tom of Finland!”

May 8 is the birthday of Tom of Finland (1920–91), often called Finland’s most famous artist globally. Shortly after that anniversary, on May 17, the annual International Day against Homophobia, Transphobia and Biphobia (IDAHOTB) takes place.