Kaivama musicians Rundman (left) and Pajunen grew up in the US surrounded by Finnish heritage.

In a bright living room in Minneapolis, Minnesota, the sound of a violin climbs up and down the notes of a buoyant melody. A steady harmonium – an old-fashioned pump organ – breathes out the chords of a dance tune.

The two musicians are Sara Pajunen and Jonathan Rundman. They started Kaivama, a progressive Finnish American folk band, in 2010. With backgrounds in classical and rock, the duo’s fresh take on traditional music has won them fans both young and old, among Finns and non-Finns alike. A concert tour of Finland is in the works for the future.

“The project is very unique because it’s not only a musical project but an exploration of heritage,” says Pajunen, a 32-year-old fiddle player.

Both Pajunen and Rundman, 41, who plays mandolin, guitar and keyboards, are 75 percent Finnish. They grew up in mining communities with large Finnish populations in the north-central US.

Kaivama’s name comes from the Finnish verb kaivaa, meaning “to dig,” suggestive of the duo’s desire to uncover and explore their heritage. They got their start in the summer of 2010, when Pajunen was invited to play a festival and asked Rundman, whom she’d met at a Finnish Christmas carol service, to collaborate.

Their fiddle-heavy tunes – some traditional, others original – are based on Finnish folk music, whose lilting, upbeat schottisches, polskas and mazurkas were popular dances in the late 19th and early 20th centuries. The band began touring across the US, releasing their first album, Kaivama, in 2011.

Though Pajunen and Rundman bring different musical backgrounds to Kaivama, both grew up surrounded by their Finnish heritage. “Finnish American life is just normal in that part of the world,” Rundman says. “My whole high school was filled with Finnish kids and people who could speak Finnish.”

Pajunen, a classically trained violinist who studied in Minneapolis and at the Helsinki Conservatory, was immersed in the Finnish folk tradition from an early age. Rundman had heard Finnish classical and church music, but says that, like most of Kaivama’s audiences, his interest in Finland’s folk tradition is newly sparked. As a rock musician, he finds Finnish music’s rhythmic shifts and driving undertones familiar.

“There’s aggression, and then there’s this sort of pastoral, ambient atmospheric beauty that exists simultaneously,” he says. “The minute I heard Finnish folk music, it was clear to me that this was crossover music. You don’t have to be Finnish to like what Kaivama does.” 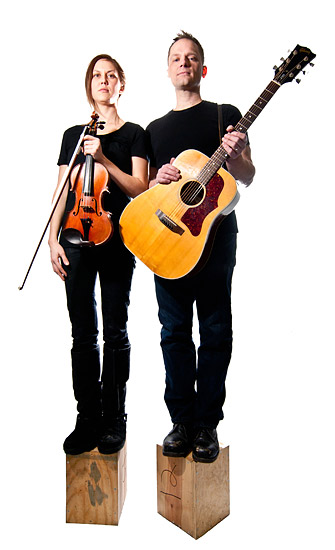 Listeners on both sides of the Atlantic get caught up in Kaivama’s blend of Finnish and American sounds.Photo courtesy of Kaivama

Kaivama has established firm connections in Finland without ever performing together there. Through family and friends, early demo songs were played on Lira, the Finnish Broadcasting Company’s radio show for traditional music, before the band even played their first concert.

Shortly after the duo formed, Pajunen visited Finland to study with renowned folk fiddler Arto Järvelä. Järvelä expressed interest in collaborating with Kaivama, and in 2011 and 2012, the three musicians toured the US together.

“That really was a boost, because it was super fun and we learned a lot of new material,” Rundman remembers – enough new material to release an album, Arto Järvelä & Kaivama, in 2012.

Järvelä, who comes from a family of famous fiddlers, brings his own musical background to the smörgåsbord, including a direct link back to the roots of the music in the Old World.

“Having Arto play with us brings the real Finnish tradition to what we’re doing,” Pajunen says. “We meld together, and we change a little bit and he changes a little bit, just like any collaboration. He’s the real deal.”

Pajunen and Rundman are adding a vocal component to Kaivama, singing in both Finnish and English. As for the future, Pajunen hopes to see Kaivama’s debut in Finland soon.

“The Finns might be quite interested in what we do, because [they] have always been interested in the ‘lost Finns,’” Pajunen says, referring to those whose ancestors left Finland long ago for a new life in the US.

Finnish tango music supergroup Tango-orkesteri Unto celebrated its 15th anniversary with concerts in the US and Europe.