Known as reikäleipä, flat round rye bread with a hole in the middle is traditionally stored on poles suspended under the ceiling.

Finns have long been avid consumers of rye bread. Such is their enthusiasm for this culinary staple that they even take it with them on trips abroad.

In the summertime Finns head to their summer cottages on the mass in the weekends and during summer holidays. As a result, rural communities around the country often double in size during the warmer months, with this temporary migration giving a considerable boost to the local economies.

There is one product in particular that these city slickers enthusiastically seek out during their temporary stays that can’t be found on store shelves elsewhere.

“People are really eager to eat the local rye breads,” explains Johanna Mäkelä, professor of food culture at the University of Helsinki. “I would suspect that some of these local bakeries are surviving just by baking in the summer.” 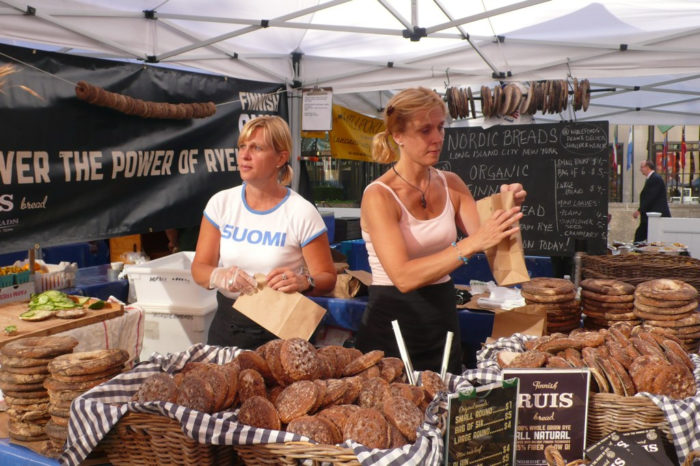 Finns have kept rye bread in their hearts and on their tables for thousands of years. It is part of their cultural identity. Nordic Breads maintains a successful stand at a New York City market.Photo: Finnish Ruis Bread

Such enthusiasm is unsurprising. First cultivated in Finland over 2,000 years ago, rye grain’s adaptability to various soil types, coupled with its ability to ripen over the short northern summer, has long seen it a staple of the local cuisine.

“Finnish rye bread is a story of a poor country, as there were so few ingredients that were always available,” Mäkelä explains. “Water, leaven, salt and rye flour – that’s still the basic recipe. Sometimes you can also add yeast.”

Whether it’s the round limppu (loaf) originating from the eastern parts of the country, or the west’s flat disc with a hole in the middle, known as reikäleipä, Finnish full-flavoured rye bread is noticeably lighter than varieties from Germany and the Baltic Region. It is also considerably less sweet than Swedish rye bread, and is commonly enjoyed as a sandwich, dipped in soup or simply by itself, topped with a layer of butter.

Whichever way you look at it, and whatever shape it comes in, the bond that Finns share with rye bread cannot be overstated.

“If people come from a different part of Finland and move to Helsinki, they often long for the kind of bread they have eaten in their childhood,” Mäkelä explains. “Also, if you ask almost any Finn going abroad to meet expats, there are two things they would take with them: rye bread and Fazer blue-label chocolate.”

This coveted bread is even on sale at Helsinki Airport to meet demand. Here travellers can pick up a last-minute gift for their friends and family, or ensure they have enough in stock when spending time outside of the country. 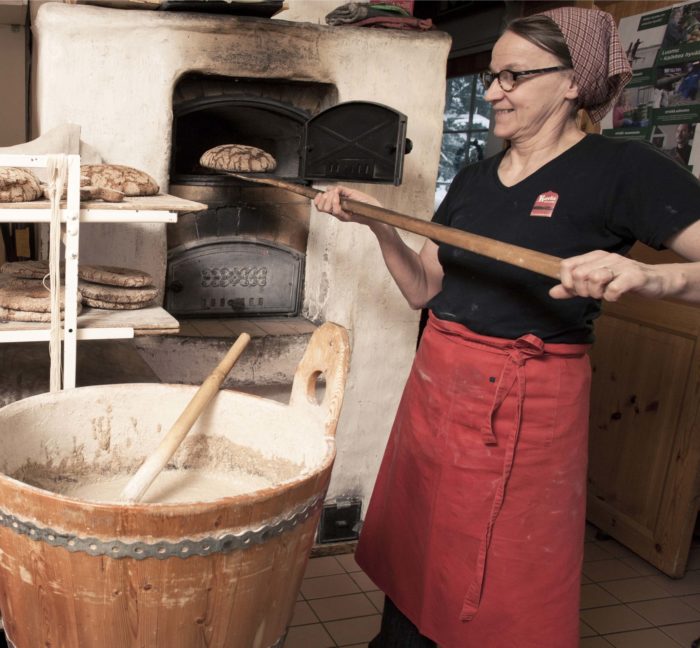 Traditionally rye bread was baked in a big baking oven made from the household’s own leaven, which was passed down through the generations. Photo: Elina Sirparanta

Rye bread’s ubiquity over the years has seen it become deeply engrained in Finnish culture. Aside from being referenced in the national epic Kalevala, it also features prominently in paintings and proverbs from earlier ages.

Farmers once took heed that consuming rye gives one power in the wrists if hard work is required, and the grain was said to provide energising fuel for draught horses. These days, such beliefs have been replaced by scientific evidence underlining various health benefits.

“Rye has a very high fibre content,” explains Kaisa Poutanen, Research Professor from VTT Technical Research Centre of Finland. “Even though it’s concentrated in the outer layers of the kernels, the dietary fibre is also found in the inner parts of the grain.”

This abundant fibre directly aids the intestinal health of consumers. Not to be outdone, the grain also helps to protect from diabetes.

Last, but certainly not least, the satiating effect of rye bread is widely recognised as being integral for weight management.

With research continuing to uncover new health benefits, and the number of varieties on offer growing steadily, it’s safe to say that store shelves around the country will be well stocked with the national bread for many years to come.

“We Finns use rye bread to sustain ourselves and our bodies, but it is also part of our cultural identities,” Mäkelä observes. “We are keeping it in our hearts, but on the other hand we are also keeping it on our tables.”

Rise of the leaven

The special leaven, sourdough, used when preparing Finnish rye bread is known as leivän juuri in Finnish, or ‘the root of the bread’.

“Many households still have their own leaven, which they inherited from previous generations,” explains VTT’s Kaisa Poutanen. “Where I live in Kuopio, a lady has leaven which is over 50 years old that she got from her mother-in-law. She is still baking with it, every week.”

The trick to preserving leaven is to ensure that some of the bread mix is left over when baking, which can then either be dried or frozen. Next time around all that needs doing is add a little water and the bacteria start to live again. And the cycle continues, ensuring flavoursome bread time and time again.